“I still can’t understand it. About the clothes, I mean.”

There’s a long and depressing history of make-believe ghosts in American culture, going back to the late 1840s, when the Fox sisters discovered that they could convince people that ghosts were speaking to them by cracking the joints in their toes. The Fox sisters’ toes, I mean, not the ghosts’ toes. Ghosts don’t have toes. At least, I’ve never heard that they do. Look, it’s not important whether ghosts have toes.

The point is that David and Amy are currently trying to convince the Collinwood domestic staff that there’s a ghost in the house, by committing the most confusing version of spiritualist fraud in haunted house history.

The kids actually have made contact with a real ghost — the spirit of Quentin, a Collins ancestor who wants revenge on the familiy for locking him in a room 70 years ago and letting him starve to death. The angry specter has possessed the children, and he’s using them to further his evil ends, whatever they are.

Meanwhile, Barnabas and Maggie want to take the kids on a trip to Boston, for reasons that I’ll get into later. Quentin is furious, because the children are key to his long-term revenge plan, so David and Amy have to figure out a way to convince everyone to let them stay at Collwinood.

Let me see if I can find another way to explain this. Nope, I can’t. That’s what’s happening on the show today. Sorry.

Let’s try this from the top. Vicki has vanished into the past, traveling back to the 18th century with her ghost husband. The family has hired Maggie as the new governess, so Mrs. Johnson packed Vicki’s clothes into a box, and put them in the basement.

But now — and this is the purportedly terrifying thing — Maggie has opened the wardrobe, and there are Vicki’s clothes still hanging there, because they are magical ghost clothes!

This is unnerving for everyone, especially the housekeeper. If clothes don’t stay where you put them, then this could mean the end of laundry as we know it. 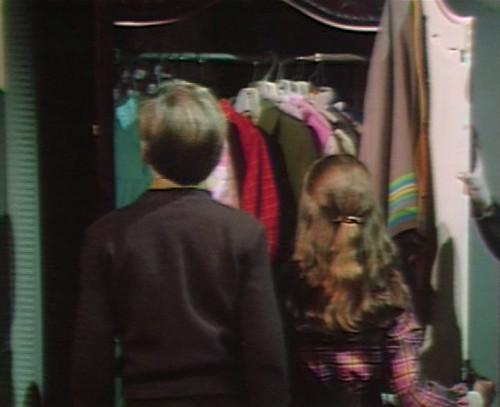 But that’s just the start of today’s heart-stopping thrill ride. Next, Amy enters the room, and tells Maggie that she’s put all of her clothes on the bed, so they can pack for the trip to Boston. But when they get to Amy’s room, all of her clothes have been mysteriously put back in the wardrobe too!

Obviously, this means that Amy is also a ghost. It’s like an epidemic around here.

Continuing with their devious plan, the kids hang around and ask irritating questions while Maggie repacks Amy’s suitcase. They keep giving each other knowing looks, so it’s obvious that they think things are going swimmingly so far.

But the odd thing is that they’re rattling Maggie by asking about what happened to Vicki — where did she go, why didn’t she say goodbye, will she ever write to them, and so on.

This does make Maggie nervous and short-tempered, but it’s hard to give David and Amy credit for this, since Vicki actually did just disappear, right in front of people. This is one of the reasons why Barnabas and Maggie want to take the children to Boston in the first place. It’s not super clear why the kids think this is a good tactic for postponing the trip. 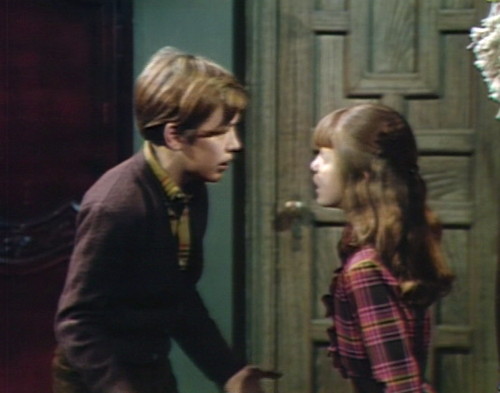 And that really is their plan, which is baffling. When Maggie leaves the room, the kids have another conference.

David:  I know. But can’t you tell? They’re getting scared.

Amy:  Yes, but not scared enough! We still have to leave!

David:  We’ll just have to scare them more.

David:  I don’t know! I’ll have to ask Quentin.

Amy:  What if Quentin doesn’t know?

Now, I have to remind you that the “Quentin” that they’re talking about is an actual ghost, currently haunting the abandoned west wing of the building that they’re standing in. They’re going to ask a real ghost for tips about how to pretend that there’s a fake ghost.

I have to remind you of this, because if you get confused and stop reading, then I’ll be left alone in the room with this storyline.

We don’t get to see the strategy session with Quentin, but it must have been a doozy, because this is the next stage of their plan.

Amy:  I usually mind saying goodbye to Chris, but this time I didn’t!

Amy:  No, because I’m so excited about going to Boston!

Barnabas:  I’m glad you are.

Barnabas pats Amy on the shoulder, and walks away.

As he goes, Amy’s grin becomes a puzzled frown, because she’s thinking, How is this brilliant plan going wrong?

But at least one phase of the operation is going well. David runs to Mrs. Johnson next, and tells her that he was in the middle of packing for the trip, and now his clothes are magically back in the wardrobe too.

This unpacking scheme isn’t making much of a dent in the Boston plans, because obviously if there’s a frightening ghost in the house, then the adults are even more likely to take the kids away, so I honestly have no idea what the hell they’re trying to achieve.

But at least David doesn’t have to pack, which is a plus. I wish I’d thought of this “I cleaned my room, but a ghost messed it up again” strategy when I was a kid; it could have saved me a lot of hassle.

So it’s time for the final stop, an all-out assault that will put the kibosh on the Boston trip once and for all.

David:  Will you take us to the Boston Zoo?

Barnabas:  If you’re both good.

Amy:  I’ve never been to a zoo before!

Well, I don’t think they could make it any plainer. Why is this plan not working?

Happily, everything works out okay in the end. Vicki’s music box magically opens by itself, and starts to play Josette’s theme. Inside the music box, Maggie finds a note that says, “I am alone. Help me! Help me!”

Maggie shows the note to Barnabas, and they realize that Vicki really is trying to communicate with them. Barnabas has to stay, and the Boston trip is cancelled. Hooray!

Amy:  Maggie said the music box opened by itself. Quentin can’t do that.

Oh, man! That means we do have to go to Boston, after all. We’re going to have to start all over again from the beginning.

Tomorrow: Did He Fall, or Was He Pushed?

One of the three cameras is severely busted today, showing dark green smudges over practically the whole picture. They use it anyway, because this is a network television show that literally does not have the money or time to fix a broken camera before they tape an episode.

Chris tells Barnabas that he’s been concerned about Joe for some time — he hasn’t been himself for months. Barnabas says, “Well, he’s been perfectly rational with me, until the other night.” Two months ago, Joe tried to strangle Barnabas with a curtain tie.

When Mrs. Johnson and David stand up and walk away from the fireplace, they talk over each other’s lines.

The fishing line pulling the music box’s lid open is clearly visible in the close-up, and you can see it when Maggie picks up the music box, too. But keep in mind that the picture we’re seeing on DVD is a lot sharper than the average broadcast in 1968, when people had to play with the antenna in order to get a clear picture. It probably looked just fine at the time.

Tomorrow: Did He Fall, or Was He Pushed? 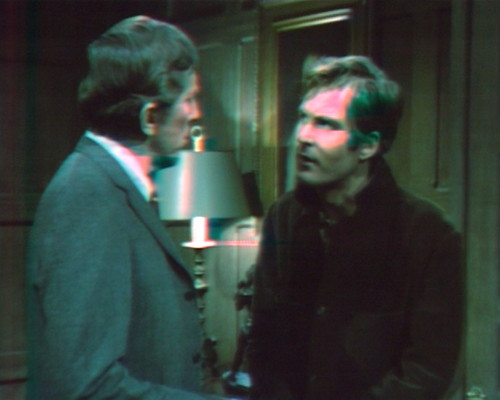