“Oh, I know you’re going to say it’s none of my business, and it isn’t. Except that I’m making it my business!”

Recasts are always tricky on soap operas, by which I mean that they usually turn out to be an alien shapeshifter or some other kind of hoodoo from the notworld, feeding off the audience’s precious life essences for its own malign purposes. Recasts are not to be trusted, and should be handled with extreme caution.

So when we hear the announcement over the credits — “The part of Victoria Winters will be played by Miss Betsy Durkin” — we are on alert. Hackles are raised.

The last major recast that we had on Dark Shadows was when the part of Burke Devlin was suddenly played by Mr. Anthony George. It didn’t work out that well, by which I mean that they eventually had to shoot him in the face just to get rid of him, and even then he wouldn’t stay dead.

You know, I forget if we ever got that dude to go back to his grave or not. Somebody should probably go and check. 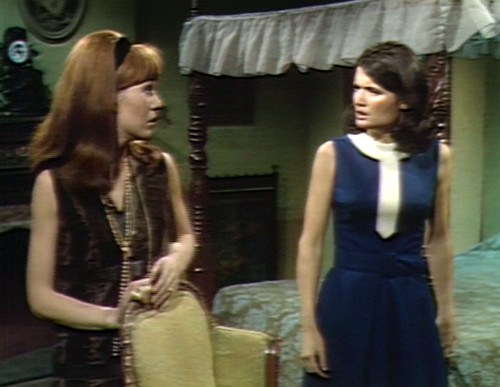 The new Vicki has a tough road ahead — she has to make us believe that this is the same girl governess that we’ve grown accustomed to — so it’s refreshing to have her pick a fight the very first second that we see her.

Maggie has told Vicki some big news, and Vicki acts like she’s just been punched in the face.

Vicki:  Nicholas Blair asked you to marry him?

Vicki:  Should you? Are you going to trust your life to a man, when the only thing you know about him is that he says that he’s Cassandra Collins’ brother? Oh, Maggie!

Once again, you have to admire Dark Shadows for always refusing to play it safe.

They could have started the scene with Maggie coming into the room and saying, “Well, well, Vicki! How are you, dear Vicki?” just to give the audience a second to get accustomed to the newcomer before she launches into a petulant rant. Dark Shadows doesn’t bother with such formalities these days. 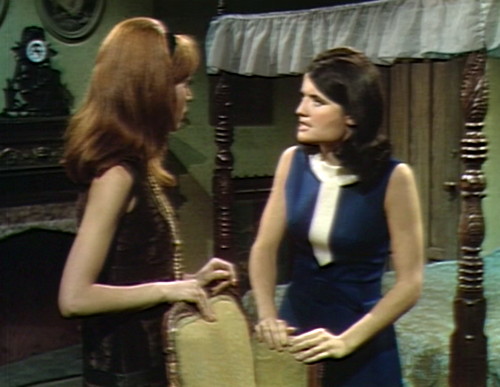 Instead, Vicki just digs in for a fight.

Maggie:  Vicki, do you know something about Nicholas that I don’t?

Vicki:  Oh, no one knows anything about him.

Maggie:  Well, I can tell a lot by the way that he’s treated me.

Vicki:  I wouldn’t trust him.

Maggie:  Vicki! I never knew you were so suspicious.

So there you go, it’s that easy. Maggie makes a couple more remarks on the theme of how offended she is, and then she walks out and slams the door. 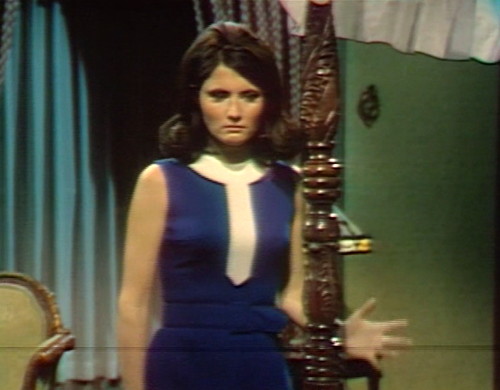 Left on her own, Vicki growls, “Nicholas Blair!” and then she marches to the phone to hate-dial the guy, and invite herself over.

I’m not sure what these girls were planning to do tonight, but whatever it was, Maggie is probably better off going stag. Vicki is having a super peeved evening.

Now, personally, I happen to like aggressive characters running around and yelling at everyone, and it’s about time somebody talked sense to Maggie Evans. If this was Julia popping by for a late-night game of speaking truth to power, I’d be all over it, so Team Durkin is still in control of the board at the moment.

Let’s see how round two goes.

Vicki:  You cannot marry her. Oh, I know you’re going to say that it’s none of my business, and it isn’t. Except that I’m making it my business! She doesn’t know about you.

Nicholas:  About what, Miss Winters?

Nicholas:  I thought the proof of humanity was the ability to love.

Vicki:  Cassandra Collins was a witch!

Nicholas:  And I am her brother, therefore I am a, uh — warlock?

And damn, look at this. Girl is not having it tonight.

Vicki:  I knew Cassandra in the past, when she was Angelique, when she first came to this country. I was there — I was hanged for what she did! When she lived here as Cassandra, I watched what she did. And the very day she disappeared, you arrived — as if we had to have some eye of evil constantly staring at us! Well, I won’t let you marry Maggie. I won’t!

Here stands a reborn Victoria Winters, staring the Devil right in the face, and daring him to start something. I could get used to this. 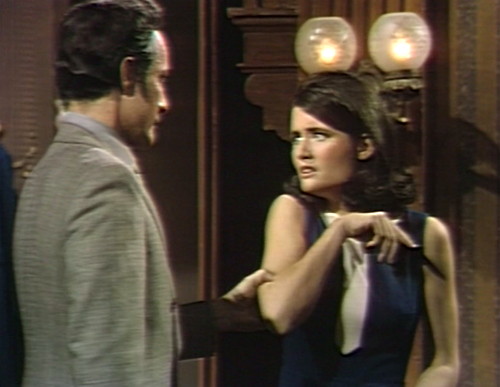 And then, sadly, it turns out that Sam Hall only wrote half a scene today.

Nicholas advances on Vicki, and she backs away, saying, “Don’t come near me!” And then pretty much nothing happens. 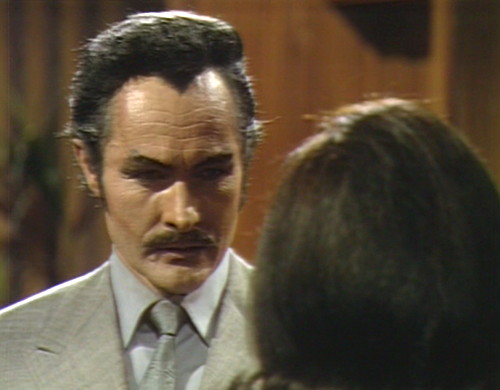 He says that Maggie won’t believe Vicki’s preposterous story, which is true, because we just saw Vicki trying to warn Maggie, and it didn’t work. But this appears to be the extent of her plan.

Nicholas:  Then I should be very careful if I were you, Miss Winters.

Nicholas:  I mean, you may lose Maggie’s friendship.

Vicki:  That’s not what you meant, and you know it!

Nicholas:  Are you going to see her now?

Vicki:  I’m giving you the chance to break off with her before I do.

And then… wait, really? 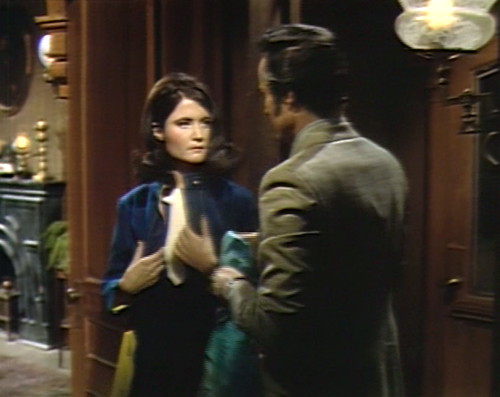 Yup, that’s it. She says that he’s an inhuman demon, and then she just says goodbye and leaves. He even helps her put her coat on.

It’s one of the more baffling scenes. Why did she even bother to come over? 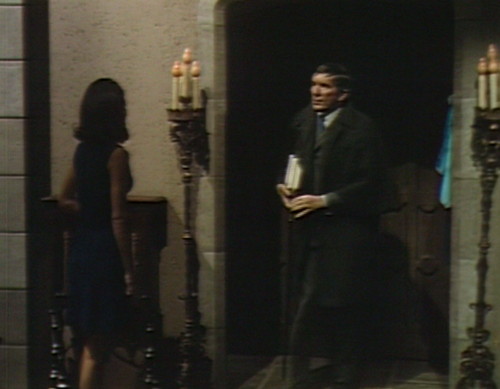 But that’s nothing compared to what happens next. Vicki goes back to Collinwood, and there’s thunder and lightning going on, and they do a little sequence where she walks around the foyer and turns all the lights off.

Then the door blows open, and there’s a dark figure framed in the doorway, and it turns out to be Barnabas, and everyone is very relieved.

Vicki gives Barnabas her sunniest smile, and gushes, “I haven’t seen you in so long! How are you?” It turns out he’s fine.

They have a little chat about why Barnabas came over — he’s here to talk to Julia, natch — and then the bad thing happens.

She takes his hand, and says, “Oh, Barnabas, it’s so good to see you. I’d like to see you tomorrow. Shall we have dinner? Please.”

He says, “Of course,” and she’s delighted, and that’s when I remember what’s actually going on in Vicki’s life right now.

The last time we saw her — just three days ago — she was left at the altar by her fiancee, who was then charged with murder.

Jeff is currently in jail for a crime that he didn’t commit. But Vicki doesn’t mention him once today, and now it looks like she’s arranging her social calendar for a post-Jeff future.

So I have to ask: Is it possible that this isn’t Vicki after all? Maybe the real Vicki is tied up in a closet somewhere — it wouldn’t be the first time — and this is actually some kind of ersatz dimension-hopping brood parasite from the Durkinverse.

Keep your eyes open, people. Stay vigilant. This is not a drill.

For the close of the teaser, Barnabas should be staring at Nicholas, horrified. But they hold the shot longer than he expects, and we can see his eyes flicker to the camera, to see if they’re still going.

Nicholas asks Barnabas, “Do you envy me my powers, Mr. Collins? If you had the chance, would you have them, or does that idea disgust them — disgust you?”

Barnabas coughs in the middle of a line: “If you’re planning to bring — (cough) — a woman who is drugged or under a spell, we will not go through with it.”

In the middle of act 1, a stagehand moves the hands of the clock forward as the camera is focused on Nicholas looking out the window. Unfortunately, Nicholas can’t help peeking at the stagehand to make sure it’s happening.

In act 2, Nicholas tells Vicki, “I’ve heard — been described as a great many things by many people, I’d be most interested in hearing your description.”

When Nicholas removes the stake and wakes Tom up, he’s wearing a different shirt than he had when Barnabas staked him in episode 571.

The part of Victoria Winters will be played by Miss Betsy Durkin, a stage actress who’s on television for the first time today.

Betsy’s acting career started in 1961, in a touring production of the Broadway musical The Boy Friend. She appeared in a summer stock production of Bye Bye Birdie and a dinner theater Li’l Abner, and Off-Broadway in the 1964 flop The Athenian Touch, which closed after one night.

Betsy’s Broadway debut was in 1965, playing a minor role in Cactus Flower, a well-received farce starring Lauren Bacall. She stayed in Cactus Flower for three years, finally deciding to leave in late 1968, when another actress was cast to fill a larger part that she’d been hoping to get. She auditioned for Dark Shadows, and was cast as the new Vicki.

Betsy is naturally a redhead; she dyed her hair for Dark Shadows, to match Alexandra Moltke.

Also auditioning for the recast Vicki was Jaclyn Smith, who had just married Roger Davis (Peter/Jeff). I’ve seen conflicting stories for why Jaclyn didn’t get the role. Some sources say that the producers didn’t want real-life newlyweds on the show, some say that it was her Texas twang, and some say that she did get the offer, but turned it down. Jaclyn and Roger were married until 1975, and she became famous in 1976 as one of Charlie’s Angels.

One more note — if you don’t recognize the comic book panel above, it’s from the first issue of the Gold Key Dark Shadows comic, which we talked about in Episode 529: Missing Adventures.

28 thoughts on “Episode 630: Vicki Ruins Everything”