“It is true that he tried to kill you, but he was only acting out of fear.”

Carolyn Stoddard is dead, killed by a freak mad science experiment. And that’s just the beginning; the evening gets worse from there.

Choked with rage and grief, Adam the enormous Frankenteen tells Barnabas that he’s heading straight to Collinwood, and he’s going to murder everyone he can find. Then Adam punches Barnabas in the gut, drops him like a bad habit, and makes for the wide open spaces.

Barnabas tries to stagger after the crazed killer, but he can’t even make it to the front door before collapsing into Julia’s arms. She leads him to a chair and tries to help him recover, but Barnabas is desperate. There are three people living at Collinwood — more than that, if you count the help — and they are moments away from being entirely massacred. There’s not a moment to lose.

And hey, you know what? This would be a great moment for somebody to own a fucking telephone.

I’m sorry, I’m sorry. You know that I don’t like to use language. But I seriously think that this episode was specifically engineered to drive me out of my god damn mind.

Julia says that she has some medication upstairs that might help, so Barnabas tells her to go up and get it. I’m not sure what kind of medication you give to someone who’s been socked in the breadbasket, but maybe there have been some advances in medical science since the last time I checked.

Anyway, the point of having Julia go upstairs is for her to see that the bed in Josette’s room is empty. Carolyn’s body has vanished.

Now, that’s weird. I’ll give them that. Even for these people, that’s an unusual circumstance. But the really weird thing is that all of a sudden the entire focus of attention shifts from the imminent mass murder at Collinwood — which it would be a snap to prevent, if only certain people had thought to take advantage of the available telephone installation services — and instead, Barnabas and Julia drill down into what happened to the corpse that they have apparently mislaid to rest.

“She did,” Julia insists. “I examined her myself.”

“But the body can’t just disappear like that!” Barnabas paces anxiously around the room. I guess somebody’s made a miraculous recovery.

He sits down again, and they have one of their impromptu Junior Detectives meetings, where they review the case, with a particular emphasis on how baffled they are. 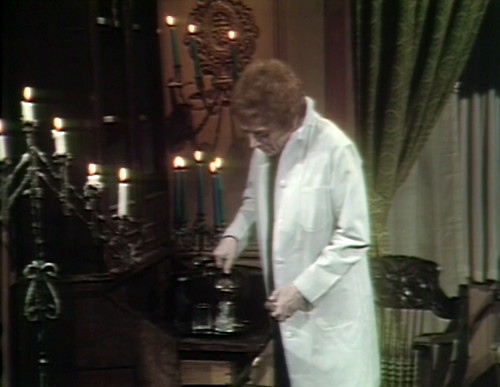 Then — and I swear to you on my mother’s eyes that this is what happens next — Julia saunters over to the desk, where she finds a jug of water and two empty glasses. She fills one of the glasses with water, and then she fusses with a little pill bottle that she takes out of her doctor’s bag.

She approaches Barnabas, and hands over the supplies.

Barnabas:  I don’t need that! I’m all right.

Julia:  You must take it; it’s a stimulant. Now, take it. Take it just in case.

And now we’re watching an ill-tempered vampire swallow a stimulant and drink a glass of water, just in case. I mean, am I the only one who feels like there’s some kind of urgency to this situation? Collinwood must be awash with the blood of the innocent by now. 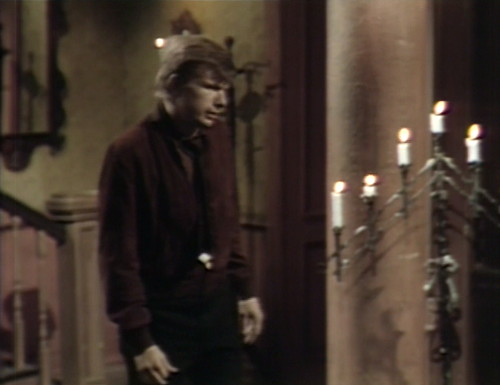 Then the door opens, and Willie walks in. Finally, here’s an able-bodied first responder; now we can get a move on. They just need to hand him a crossbow, point him in the direction of Collinwood, and let events unfold.

But first, Willie wants to discuss the problems he’s having with Maggie, who he’s hidden in a crypt for reasons that are not germane to the current situation.

To his credit, Barnabas takes a firm line.

“I’m sorry, Willie,” he says, “I know it’s difficult for both of you, but we cannot cope with Maggie now. We’ve got a far greater emergency to look after here!” 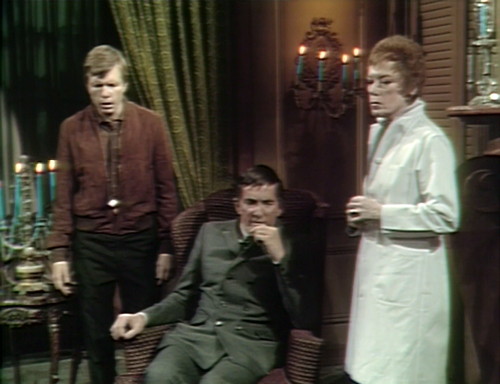 Willie asks what he’s talking about, so Barnabas offers a recap.

“Carolyn Stoddard was involved in the experiment,” he says, “and she died. And now Adam will go to Collinwood, to destroy the family.”

He pauses, and the three of them fall into a thoughtful silence.

So the only interpretation that I can think of is that Dark Shadows is like the numbers stations, which broadcast endless lists of numbers as coded messages to secret agents. The entire run of Dark Shadows has actually been an elaborate deep cover operation, and today is the day that the operatives receive their instructions.

And that’s why — at 4:08pm on Wednesday, October 2nd, 1968 — across the nation, a thousand well-trained sleeper agents disguised as thrill-seeking housewives and pot-smoking teenagers were activated. “Adam will go to Collinwood, to destroy the family” probably meant that an enormous cadre of Russian fifth-columnists had been identified and targeted for assassination. That is literally the only explanation that makes sense.

Willie agonizes, “Barnabas, what good is all this to worry about, I mean, if Maggie gets out and goes to the police?”

There’s a huge scratch on Collinwood’s front door. It’s framed perfectly next to Barnabas’ head as he pauses before knocking. 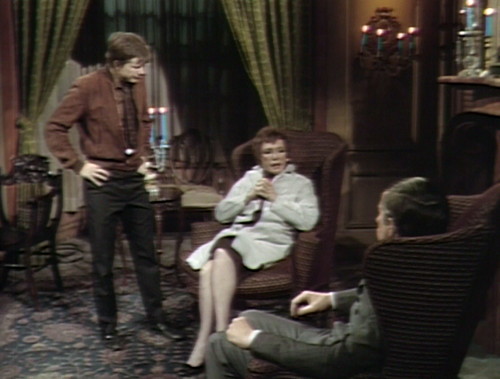