“One day she’s perfectly rational, and the next day, she’s suddenly back to talking about death, and mausoleums, and being buried alive.”

As the Bride of Frankenstein storyline ends its seventh straight week of boring the hell out of me, I’ve decided that I’m going to sneak off and play a game today — specifically, the Dark Shadows board game, released by Whitman Publishing in fall 1968 to an eager audience of eight-year-old psychedelic soap opera fans.

Sometimes I do a little late-60s archaeology here, and try to imagine how watching the show might have felt at the time that it was airing, using books and old newspaper articles and TV schedules and guesswork. But there’s one thing that I’ve never really been able to get my head around, which is how old the audience was supposed to be.

My basic understanding of the Dark Shadows audience is that it was mostly housewives and teenagers, with side bets on hippies, mental patients and stoned college students. But then something like the board game comes along, and I have to wonder: were elementary school kids watching Dark Shadows? And, if so, why didn’t anyone stop them? 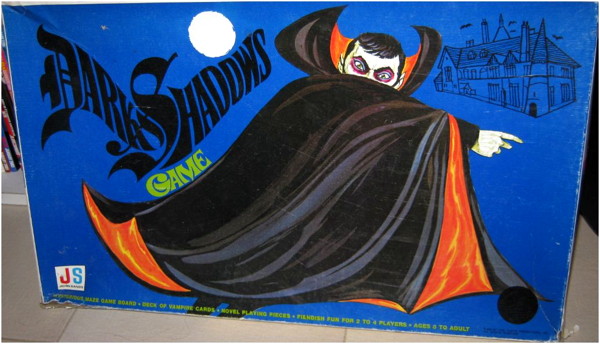 But here it is, the Dark Shadows Game, offering fiendish fun for 2 to 4 players, ages 8 to adult.

The box has a rather compelling portrait of Barnabas, swathed in a cape so lush and gorgeous that it threatens to utterly consume him. It’s not completely clear what he’s attempting to communicate with those hypnotic, purple-rimmed eyes — looking at his scrawny little legs and the precarious angle he appears to be standing at, my vote is for “help me, I’m about to fall over”, but it could be anything.

Off to the right, you can see Collinwood, more or less, which is also standing at a somewhat perilous angle. The mansion is beset with bats and stray architectural oddments, and has no front door to speak of. 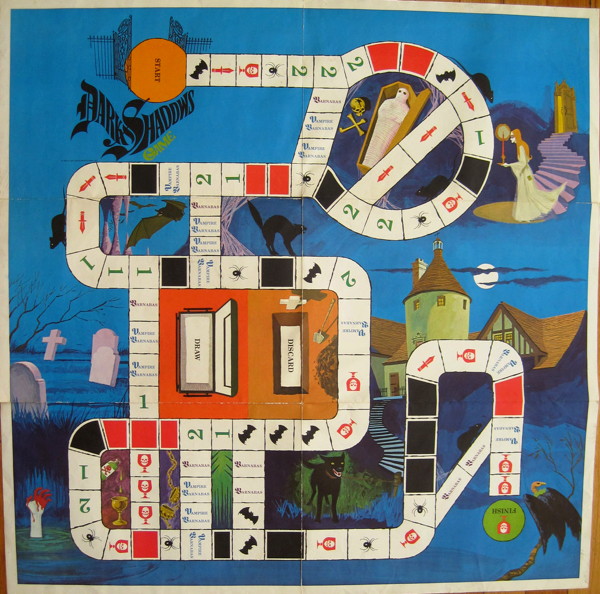 The game board is gaily festooned with haunted house embellishments, including gravestones, coffins, dead trees, winding staircases, rats, bats, rattling chains, a black cat, a fierce-looking dog, a woman in white holding a candle, and a bloody hand emerging from a nearby pond.

The object of the game, as far as I can tell from the board, is to navigate your way from the wrought-iron gates past a series of spooky hazards, get pretty close to Collinwood itself, and then take a sharp right turn and end up in a swamp with a vulture looking at you, and then you take poison and that’s the end of the game.

Tne board actually has a very good likeness of the Collinwood tower, which is kind of impressive. The rest of the board may be a bit of a mess, but they nailed the tower, and well done. 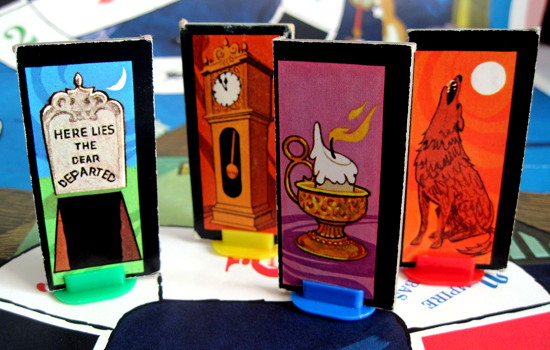 The game pieces are about as abstract as they could possibly get. Monopoly comes with a fairly whimsical set of tokens, including a wheelbarrow, a boot and a Scottie dog, but Dark Shadows takes that even further. “You can be the open grave,” the eight-to-adult-year-old says, “and I’ll be the guttering candle.”

I like that one of the pieces is the grandfather clock from the Collinwood foyer, which lends itself to some role-playing. If you’re playing as that piece, you can chime the hour, and then the other players take turns trying to hide things inside you.

The good thing about these avant-garde conceptual game tokens is that if you have a fifth player, then they can just say, “I’ll be the vague feeling of dread,” and stand around behind the other players, muttering curses and imprecations. The fifth player wins if all of the other players give up in despair.

The gameplay involves cards, which have four suits — bats, spiders, knives and poison cups — as well as special “Vampire” and “Barnabas” cards. Each card has a color, a number and a suit, and you collect the cards that you need to let you move around the board.

There are several places on the board where you need to have a run of the same kind of card — three knives, or three black squares — so you have to make some strategic choices about which cards to save up as you move around the board.

Or, at least, you would if we were playing the game, which we’re not, so I’m not sure why I’m giving you advice on strategy.

The point is, this isn’t really how a soap opera works, and when you think about it from that angle, this is an extremely peculiar cultural artifact.

As a way to interact with the world of Dark Shadows, it’s pretty far removed from the experience of watching the show. Right now, the television characters are facing problems like, “My servant kidnapped the girl that I was planning to hypnotize and harvest life-essence from.” The solution to that conundrum is not likely to be “save up on spider cards”.

But Dark Shadows is conceptually complex, and I suppose this reading of it is just as valid as the weird Paperback Library gothic romance novels, where Barnabas is kind of an itinerant Christian Grey, wandering through the centuries looking for women to demean. At least the woman pictured on the game board appears to be in charge of her own destiny, and is remarkably blasé about the huge gravity-defying rat clinging to the wall above her head.

In fact, the storyline of the game is fairly coherent, compared to the Gold Key comic book series, or the show itself. If you can get past the “I am a guttering candle” premise, then everything else pretty much falls into place.

But I can’t help but feel that the Dark Shadows material is fairly low in the mix here. Stripped of everything but a character name, a hairstyle and a location, the show struggles to assert itself. Like many spin-off products, the game is feeding off the life force of the show, without giving anything back that might keep the enterprise moving for another day.

Honestly, the game itself is neither spooky or romantic; it’s mostly just luck, math and patience. You could use different illustrations, and turn this into a game about circuses or pirates, no questions asked. This is essentially Dark Shadows as desktop theme.

In fact, Whitman reskinned the game twice in the 70s. First it was “Creature Castle” in 1975, which is pretty much what you’d expect — gargoyles and mad scientists and hideous things peering through trap doors and so on.

In 1979, Whitman re-released the game as “The Black Hole: Space Alert”, to tie in with the Disney live-action film The Black Hole. Like the movie, “Space Alert” seems utterly dreary — you start out in a survival pod, and then you kind of clamber through the doomed Cygnus, along an endless series of gantries and ventilation ducts. The game comes with a cardboard Space Probe Model that you stick at the far end, and if you win, then you can pretend that you’re the first crewmember to reach safety. At that point, I guess you just blast off. and leave all the other poor saps to suffer, somewhere past the event horizon.

Compared to that, I suppose the Dark Shadows game is actually rather cheerful, in its own way. At least you’re still on terra firma, somewhere near Collinwood.

Plus, you can see a light on in the tower room, which means somebody’s probably doing something dastardly. Let’s hurry inside, and see what they’re up to.

In the teaser, Julia says, “Barnabas, we still have about an hour of daylight left. Why don’t we keep still looking?”

In act 1, when Julia says, “Yes, Barnabas, it’s entirely possible,” we can hear a door squeaking open, and then someone in the studio coughs.

Barnabas gives Julia instructions: “Don’t argue with me now, Julia. You must simply go over there and be convincing to her, and let her, and make sure you get her out of here by tonight.”

The camera bounces a bit as Roger enters Vicki’s room.

A little random fact that I learned while I was writing this entry — Dark Shadows is not the only daytime soap opera to get a board game. There were two others, both also based on ABC soaps — a General Hospital board game in 1982, and an All My Children game in 1984. The AMC game looks especially arcane and complex.