“I’ve always wanted to at least not hurt you in any way.”

Welcome back to another week of Dark Shadows, the pop culture sensation that’s been gaining in popularity as its storylines grow progressively darker. It’s August 1968, and this crazy little daytime horror show is the success story of the summer.

Lately, we’ve been following Adam, the love-struck Frankenteen who’s hiding out from the police in an abandoned wing of Collinwood. He’s been there for a couple weeks, reading poetry and developing a full-scale crush on Carolyn, who just wants to be friends. Adam’s finally been told that he was created in a mad science lab, and there’s no chance that Carolyn will ever love him.

Left on his own, Adam picks up the knife from his breakfast tray, and considers ending it all. I believe the headline would be: World’s Largest Man Kills Himself with World’s Smallest Knife.

But I don’t know, maybe we should just leave him to it. I hate to say this, but honestly, I could do with less Adam at this point.

This is a little surprising, because so far I’ve been a loyal booster for Adam and his storyline. For one thing, I think he’s really cute, which isn’t everything but it certainly doesn’t hurt.

He’s also had a really clear through line, which they’ve elaborated on in minute detail. Each interaction is meaningful, and pushes the character forward. We know literally everything that there is to know about Adam, except where he goes to the bathroom.

But he’s been holed up in the west wing for way too long. We’re currently in the middle of a five-week period where Adam appears in nineteen out of twenty-five episodes, and thirteen of them take place in this room. It’s kind of driving me out of my mind. 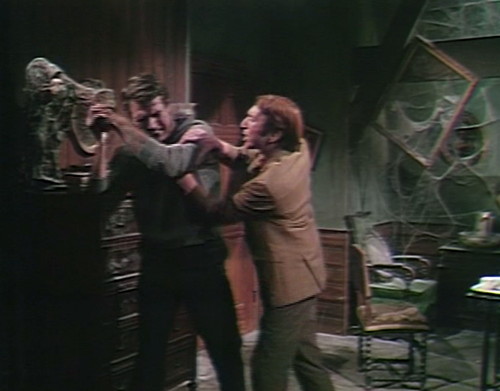 Meanwhile, Barnabas is nowhere to be found. Do you remember Barnabas? This used to be a television show about Barnabas.

Back in May, Jonathan Frid went on an insane ten-city publicity tour to promote Dark Shadows, capitalizing on the teenage audience’s astonishing appetite for Barnabas Collins. But as soon as Frid came back, Barnabas basically dropped off the canvas.

He’s still showing up on camera now and again, but for the most part, he’s stubbornly refused to take any positive steps to move the storyline forward. He’s become entirely passive, leaving everyone else to take action on his behalf, if they choose to.

This is a guy who was buried alive twice, in the space of a month. He is not the storyline dynamo that we once knew.

So let’s take a look at what Barnabas has accomplished so far this summer.

The decline and fall begins in late May, when Barnabas and Julia are keeping Adam locked up in the basement. Unsatisfied with his accommodations, Adam checks out, strangling Barnabas on his way in lieu of filling out a comment card. 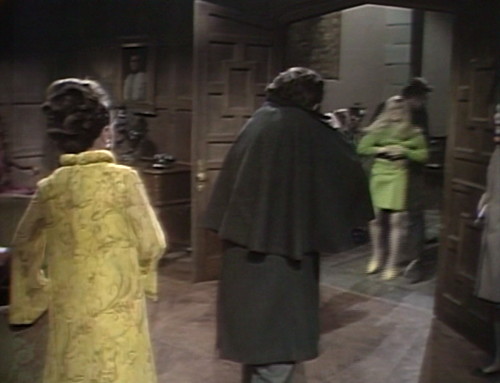 The howling, desperate creature runs out into the night, and Barnabas grabs a gun to give chase. He follows the monster to Collinwood, where Adam grabs Carolyn and makes for the woods.

Barnabas pursues Adam, and at this point, you’d think that it would be a snap to catch up. Adam isn’t going at top speed; he’s dragging the struggling Carolyn along with him. She’s screaming for help, and anyway, she’s wearing an outfit that’s practically fluorescent. There’s absolutely no way that Barnabas could possibly lose sight of them.

Except he does. We don’t even see him until four episodes later, when the Sheriff comes over to ask him what he knows about the crazed maniac who kidnapped Carolyn.

Barnabas says that he assumed they’d already caught the man, and that Carolyn was safe at home. The implication is that he just got bored with the storyline and forgot all about it.

As we head into June, Carolyn is saved, no thanks to Barnabas, and Adam jumps from the cliff at Widow’s Hill.

Barnabas and Willie start hunting for Adam again. They search for days and days, with no result. 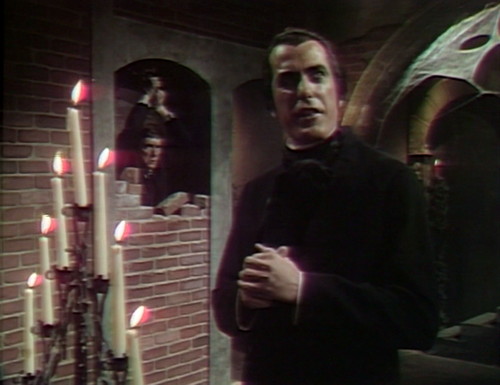 Five episodes later, Barnabas finally comes home, and walks downstairs into the basement, and there’s the ghost of Reverend Trask.

As punishment for Barnabas’ sins, Trask chains him to the wall and constructs a weird mock trial around him. Barnabas doesn’t know who called up the spirit of Trask, or why the alcove wall was broken down. Nobody tells Barnabas anything these days. 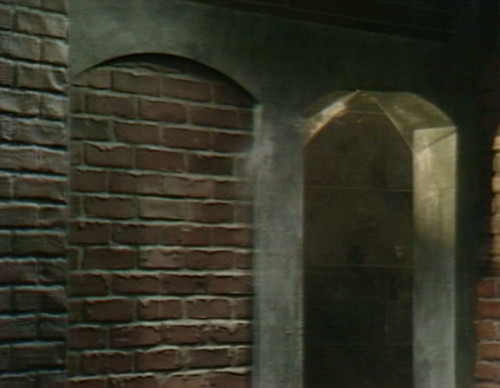 Then he’s trapped behind a brick wall for four episodes. 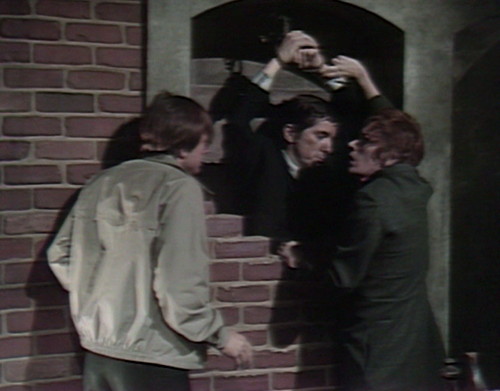 Julia and Willie finally rescue him, and just in the nick of time. Now that he’s free, Barnabas can put a stop to all of Cassandra’s wicked machinations.

But not really. He’s out for another four episodes.

Meanwhile, the ghost of Trask ties Cassandra to a tree and performs an exorcism, banishing her from the mortal plane. Now, technically, Cassandra and Trask are both part of Barnabas’ rogues gallery, but apparently it’s okay if the major plot points happen when he’s not around.

Instead, Barnabas spends the next several days wondering what’s going on. Is Cassandra really gone? Is Trask’s spirit at rest? Who’s the man claiming to be Cassandra’s brother? Where’s Angelique’s portrait? And so on.

Barnabas and Julia are surprised by Nicholas’ arrival at Collinwood, and they rush off to Professor Stokes’ house to tell him all about it.

We don’t know if they ever make it to Stokes’ place. Barnabas pulls another disappearing act, and he’s off screen for the rest of June.

We pick him up again in the second week of July, and he’s just sitting around, reading quietly and wearing his burgundy smoking jacket.

Over the last couple weeks, Nicholas has summoned Cassandra back to life, Adam’s learned to talk, Vicki was visited by the ghost of a friend’s dead father, Joe was clobbered by an assailant and taken to the hospital, and basically Collinsport has been plunged into confusion and disarray.

When he finally decides to take an interest in things, he marches over to Collinwood and offers Cassandra his love, if she’ll call off the Dream Curse and leave Vicki alone. She says she’ll think about it. 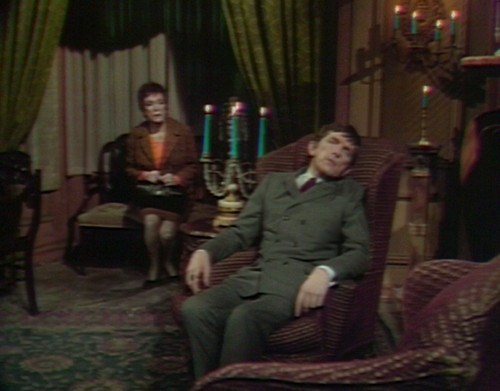 That doesn’t work, obviously, because nothing works, so Barnabas decides to just go to sleep and have the Dream, and if it kills him, then it kills him. Who even cares. 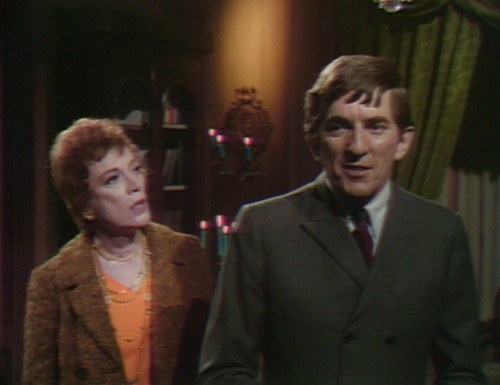 So he has the Dream, and then he wakes up, and nothing’s happened, and everything’s fine.

But not really. A bat attacks him, and he falls to the ground, weltering in gore. Julia and Willie decide to bury him, like you do, and that’s the end of that.

But not really. Julia and Stokes dig up Barnabas again; it turns out he can’t even die correctly.

Barnabas climbs out of his coffin, finally ready to take control of the storyline again.

But not really. We don’t see him for another four episodes.

When he finally decides to show up for work, he goes to Collinwood to ask Carolyn where Adam is. She says she doesn’t know.

Another four episodes go by. We’re into late July at this point.

Cassandra goes to the Old House to see Barnabas, and I swear to God, he’s still sitting around in the Old House, reading.

I don’t know what he’s been studying up on lately, but apparently it’s pretty compelling. By this point, it’s seriously an open question whether he’s even on the show anymore.

Cassandra points a gun at Barnabas, telling him that Nicholas has taken away her powers, and if she has to die, then he’ll die with her. Barnabas has no idea what she’s talking about.

He gets the gun away from her, and Cassandra runs off into the night. Julia snatches up the gun, determined to end the witch’s reign of terror, which has pretty much ended already, no thanks to Barnabas.

Barnabas tries to persuade Julia to leave it alone, and just let the storyline play out. He practically invites her to join his book club.

Everybody walks back and forth between Collinwood and the Old House a couple times, and eventually Barnabas finds Cassandra in his house again.

She’s aged terribly during this storyline. We all have.

So Cassandra dies, no thanks to Barnabas. He props up the corpse in an armchair, and runs back to Collinwood to tell Julia what happened.

When they return to the Old House, Cassandra’s body is gone. Barnabas can’t even keep track of the dead person that’s sitting in his living room.

So that brings us up to date, here in early August, as we find Barnabas standing around in his house, lighting candles.

Adam stops by, and says that he wants Barnabas to create a woman for him. Barnabas says he’ll think it over.

Adam broke a mirror at the end of yesterday’s episode, and he breaks another one when he repeats the scene in the reprise today. You can tell that they’re two different mirrors, because they break in different ways. Then in act 1, the mirror has been replaced by a third broken mirror, with a different pattern of smashed glass, so that they can set up shots with Adam reflected in the broken pieces.

In act 3, when Carolyn approaches Adam, the camera wobbles.

Nicholas forgets the word “positive” at the end of act 3, and tries to substitute. Given the botched line, Carolyn’s response is amusing.

Nicholas:  Isn’t it strange how sometimes a near tragedy can bring back a possible… uh, probable result?

Carolyn:  What do you mean?

When Adam reminds Barnabas of the words he used to know — “Music! Food! Friend!” — a boom mic comes into shot.