“Not run out, Willie. Go. Because there’s no reason to stay.”

Barnabas Collins is dead and buried, planted in the Earth by the only two people who can stand the sight of him.

“You’d feel better if you cried,” says the Second Gravedigger.

“No,” says the Second, staring off into the middle distance. “Neither can I.” He turns to face the First. “What’s going to happen to us?” he asks. “What are we going to do?”

And then the opening titles begin, waves crashing on the bleak shore of a town where life has no meaning and God is dead.

In other words: Yeah, it’s going to be another one of those entries today. Sorry.

I know, I’ve been going to the “avant-garde” well pretty often lately. All I can say is that the show has seriously been advancing down a super weird road, and maybe this is what happens to a person when you watch half an hour of postmodern soap opera every single day.

Because this is not a normal way to open an episode of daytime television, with two characters standing at center stage against a pitch-black backdrop, questioning the nature of their own existence.

Julia and Willie are essentially asking: If we’re fictional characters developed for the specific purpose of supporting the Barnabas storyline, then what happens to us when Barnabas dies? Do we still have a function on this television show? Can we live without him?

Today’s episode was written by Sam Hall, a New York playwright who really didn’t intend to spend his entire career writing soap operas. He just ended up doing that because that’s how things turn out sometimes. Not everybody gets to be Arthur Miller.

And when Sam was feeling bored and mischievous with his television work, he would amuse himself by slipping things into a script that he expected would fly under the radar. Here’s a quote from a 2009 interview with Roll Magazine, talking about The Brighter Day, his first soap opera gig:

“I was really young and rather silly. I loved the producer of Brighter Day, Terri Lewis, and she was a fan of mine. The main character was this very pompous minister, and I would make fun of him by writing the most pompous possible speeches for him and then coaxing Terri to keep them in for my own enjoyment.

“I remember one of the most pompous speeches — because he was always talking in fake minister-isms — in which he told his sister — this is a direct quote — ‘If life is a river, love is a channel through which the ships pass.’ I conned Terri the producer into letting it go through. The actor, of course, loved it and gloried in it. And it was one of the worst moments of television of the year.’”

It’s my opinion that Sam Hall — being smart and strange and under-appreciated — occasionally decided to slip references to experimental theater into Dark Shadows, just for the sheer fun of staging an absurdist black-box production of Six Vampires in Search of an Author for an audience of pot-smoking teenagers on ABC’s dime. 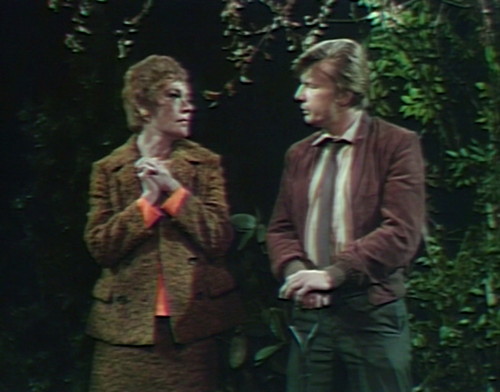 So: a quick definition of absurdist theater, for anyone who didn’t realize that there would be a test today.

The Theatre of the Absurd was a post-World War II artistic movement in Europe that basically asked the question: If the tragedies that we’ve recently lived through make us question the existence of God and the fundamental moral nature of modern society, then what is the purpose of our lives? Are we all just actors, playing out our pointless roles for the benefit of nobody in particular?

The classic expression of that idea was Waiting for Godot, a 1953 play by Samuel Beckett. In the play, two men stand near a solitary tree, waiting for a man to show up who will give them direction and purpose. (Spoiler alert: He doesn’t show.)

The characters speak mostly in short sentences, and often in fragments that pose questions that can’t be answered.

Estragon:  That we were to wait.

Vladimir:  He said by the tree. (They look at the tree.) Do you see any others?

It’s pretty bleak. Not quite as bleak as two people standing at a freshly-dug grave talking about how much they’ll miss the vampire who wanted to kill them, but Beckett didn’t have the luxury of writing for a television network where the executives are seriously not paying attention.

Willie:  I mean, I never thought about being without Barnabas.

Willie:  I mean — even when I was at Windcliff, I kept thinking that maybe someday, he’d come and get me.

Willie:  And that I’d work for him again. Oh, it was pretty bad sometimes, but — it was all I had to look forward to. Now… I got nothin’. Nothin’.

Willie:  I mean — how could somebody hate him so much? I mean, that’s what I don’t understand. I mean, how could she, that Cassandra?

That sounds like a simple thing to say, but Willie is essentially questioning the foundation of the Barnabas storyline, and therefore his own existence in this fictional world.

These are supposed to be the two characters who actually know Barnabas, and understand his secrets. If Willie really doesn’t get why Angelique hates Barnabas — the emotional throughline that carries the show through four years of story — then he doesn’t understand anything about his own life. He’s lost, and Julia is entirely alone.

Another trope of absurdist theater is that the characters try to make plans, which are ultimately meaningless and confused.

Willie:  Hey — what are we gonna tell people, Roger and everybody up at the big house?

Willie:  Well — you gotta know. I mean, when they ask where Barnabas is, what am I gonna say?

Julia:  That he’s just gone away, that’s all.

Yeah, no kidding. For characters in absurdist fiction, “I don’t know” is pretty much the default setting.

As another touchpoint, here’s a bit of Tom Stoppard’s 1966 play Rosencrantz and Guildenstern Are Dead, which we discussed during the 1795 storyline, when Millicent was going through her Ophelia phase.

Rosencrantz:  Oh, let’s see. The first thing that comes into my head, you mean?

Guildenstern:  No, the first thing you remember.

Guildenstern:  You don’t get my meaning. What is the first thing after all the things you’ve forgotten?

Julia and Willie aren’t quite going that far into an existential vaudeville routine, but they are having problems with some basic concepts.

Willie:  But — but they’ll know that Barnabas just didn’t go away like that, and didn’t say anything, I mean, they might call the police! And if the police find out —

Julia:  Find out what?

Willie:  Well, that we buried him! I mean, that’s against the law!

Julia:  Yes… (Pause, as if she’s just remembered that civilization exists) Yes, it is! 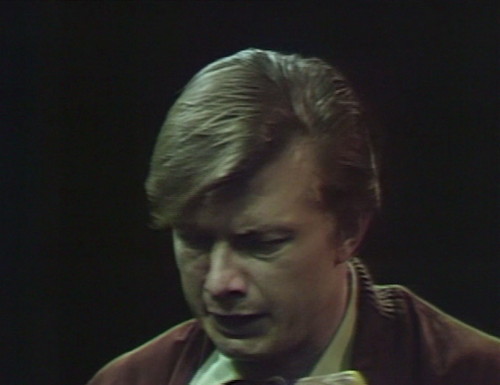 Willie:  Julia… you’re gonna have to tell them, up at Collinwood.

Julia:  That we buried him, before he could come back as a vampire? No, Willie. He kept his secret. We must keep it.

Yeah, no kidding. We’re all scared.

Vladimir:  Well? What do we do?

Vladimir:  Let’s wait and see what he says.

Vladimir:  Let’s wait till we know exactly how we stand.

Estragon:  On the other hand it might be better to strike the iron before it freezes.

Vladimir:  I’m curious to hear what he has to offer. Then we’ll take or leave it.

For a minute and a half in this scene, there’s no music — just the whispering sound of the make-believe wind blowing through the imaginary trees. The characters are empty, and alone.

Julia:  You will leave tonight, Willie.

Willie:  What? You’re not gonna convince me to try to stay?

Julia:  No. No, we will both leave tonight.

Willie:  You’re gonna run out too?

Julia:  Not run out, Willie. Go. Because there’s no reason to stay. None at all.

I know that I’m vastly overselling today’s concept, but I think it’s a remarkable scene. The lighting, the sound, the blocking — even some of the dialogue wouldn’t be out of place in an off-off-Broadway production.

I mean, look at this shot! Somebody involved in this production must have realized what this looks like. You can smell the clove cigarettes from here.

Fortunately — just before they conclude that all is hopeless, and wander out through the fourth wall and into your living room — Julia remembers that this is a soap opera, and there’s a sudden swerve toward the sentimental.

Julia:  You will come with me.

Willie:  What? Back to Windcliff? Oh, no, I mean, I’m not going back there. I’m all right.

Julia:  Not as a patient, Willie. You can have a job, and stay as long as you like.

Willie:  You mean that? What kind of job?

Julia:  Oh, a gardener, an attendant — anything you’d like to do.

Willie is touched. It’s a moment of real feeling.

Willie:  Hey, why are you offering me that?

Julia:  Because — because he would want me to.

Willie:  You’re sure? I mean, it’s not because of the police?

Julia:  No, Willie, I’ve told you the reason.

Willie:  You want me to close up the Old House?

Julia — the smartest character on Dark Shadows — has realized that yes, they’re fictional characters engaged in a storyline which has just spectacularly collapsed. There’s no further purpose to their existence; they’re going to walk off the set, and vanish into memory.

But in the middle of this spiritual crisis, she understands that there’s still one thing that she can do before they disappear. She can be kind.

Willie:  Hey, uh — what about Barnabas’ clothes? I mean, they’re gonna know he didn’t go anywhere if his clothes are still there.

Julia:  Pack his suitcase for him, Willie, yes. (She smiles.) It was very bright of you to think of that, Willie.

And he grins. A huge, infectious smile spreads across his face, and Julia smiles, and we do, too. It’s one of the most genuine emotional moments that we’ve ever seen on the show.

But if this is their last moment — the end of the world, for them — then they can at least pretend that they’ll take care of each other once they’ve left the stage.

As a solution to the absurdist’s existential dillemma, this is desperately sentimental and middle-class, and French people are sneering at us. But what the hell. This is our tragicomedy. We can run it however we want.

I edited one of the quotes above for clarity. What Willie actually says is, “Hey, what are we gonna tell people — Roger, and everybody up at the Old House, at the, at the big house?”

When Julia tells Cassandra, “Barnabas is dead”, somebody in the studio coughs.

On the day that this episode aired, Jonathan Frid appeared on The Mike Douglas Show, a syndicated daytime talk show, to promote Dark Shadows. I don’t know what he said, but I wish I did.

27 thoughts on “Episode 537: Life Without Barnabas”