“You might as well prepare yourself for an ordeal.”

The outbreak of lawlessness that Sheriff George Patterson is currently investigating centers around Adam, the patchwork Frankenstein monster. If they catch him, they’re planning to charge him with being brought to life without a license, which I don’t think is even a misdemeanor.

So you’ve got to feel bad for the Sheriff, unless you forget all about him the moment he’s off the screen, like everybody else does. 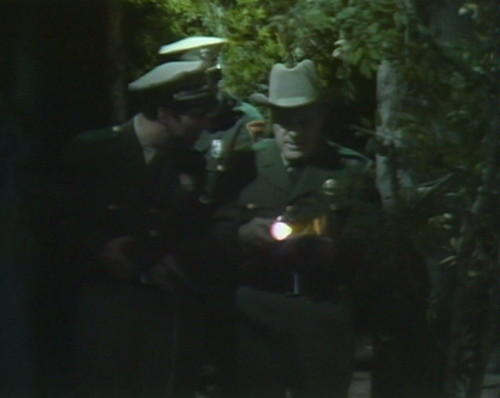 Patterson actually had Adam in a holding cell in yesterday’s episode, but the monster bent the bars and climbed out of the window within half an hour. This was the only justified arrest the Sheriff has ever made in the entire run of the show. You can imagine how frustrated he must be.

So it’s nice that he gets at least one impossible Sherlock moment. They’re stalking Adam through the woods, and the Sheriff suddenly reaches up and pulls a piece of cloth off a nearby tree. Apparently, Adam tore his turtleneck as he passed this exact spot, and Patterson, using his magical sheriff-sense, is able to spot a fragment of black cloth by moonlight. The tree must be an informant.

The Sheriff looks ahead, and says, “Yeah, I think we’re on the right track. That’s the old Collins house. Every time anything goes wrong around here, that’s where all roads seem to lead.” 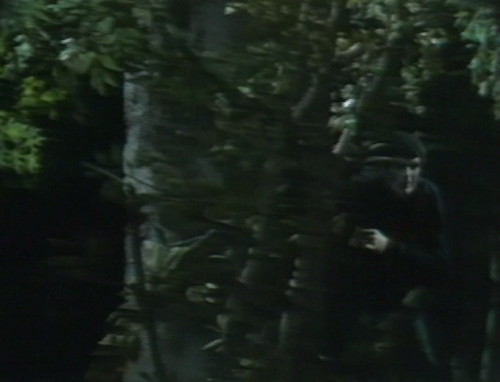 The lawmen approach the house, and the camera pans over to reveal that Adam was hiding right behind the tree where the Sheriff found the torn cloth. The tree was in on it the whole time!

The Sheriff enters the Old House with a face like thunder, and immediately begins questioning Barnabas, using the most devastating interrogation strategy he can muster.

Barnabas:  I didn’t expect to see you again tonight.

Barnabas:  No. Has something happened?

Barnabas:  Well, no. Of course not.

Barnabas assumes a puzzled frown. Patterson has him right where he wants him. 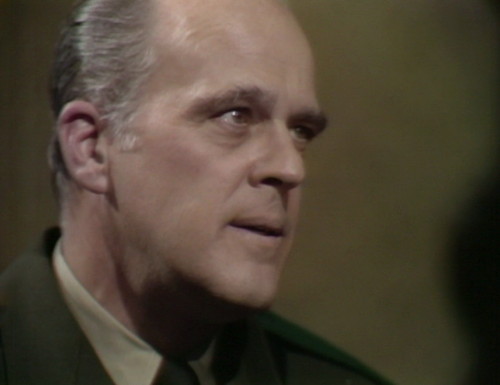 Patterson:  What have you been doing all night?

Barnabas:  Well, I think you should know the answer to that. I came here shortly after you found the man you wanted, and I’ve been here ever since.

Patterson:  I see. Why didn’t you go back out and rejoin the search party, and help look for Carolyn?

Barnabas:  You found the man who abducted her. I assumed that you had a confession from him by now, and that Carolyn was safe.

Patterson:  We had the man who abducted her. He escaped over an hour ago.

Barnabas:  Escaped! How did he ever manage to do that?

Patterson:  He seemed to find it rather simple. He merely pulled a chain out of the wall, bent the bars on his cell window, and escaped. He also mauled one of my deputies. The man may have a broken neck.

Barnabas:  Well, I’m terribly sorry to hear that. But tell me, Sheriff — why are you here now?

Well, I think it’s obvious why he’s here; he’s come over to tell you every single thing that he knows about the case.

You ask one question — “How did he ever manage to do that?” — and he gives you a full recap, including a medical report so you can figure out how many deputies he has left. Stand there long enough, and he’ll probably give you traffic and weather on the 7s. 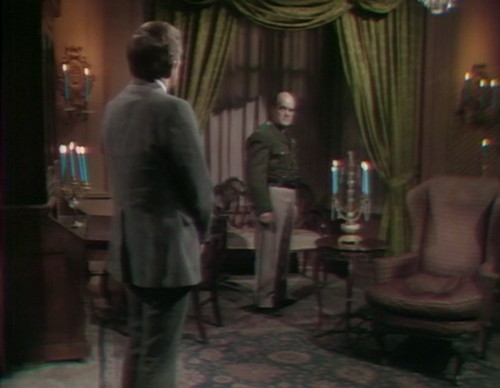 The Sheriff asks if the man came back here, and Barnabas says, “Well, if he had, I would have told you.”

Patterson rolls his eyes, and walks across the room. Then he stops, and fixes Barnabas with a stern look, clearly saying to himself, “Would’ve told me, huh? Why, I oughta…”

He takes another four steps, and then stops and looks at Barnabas again. 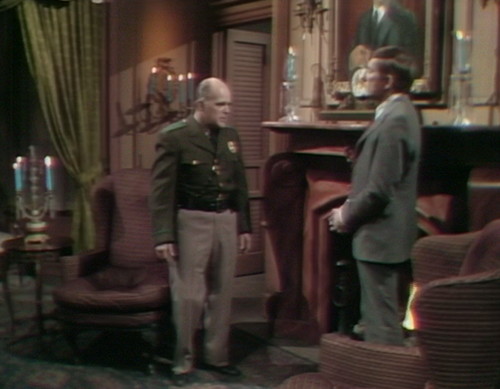 He opens the doors, glances in at the next room, and then walks back to look at Barnabas again. This concludes the search of the premises. 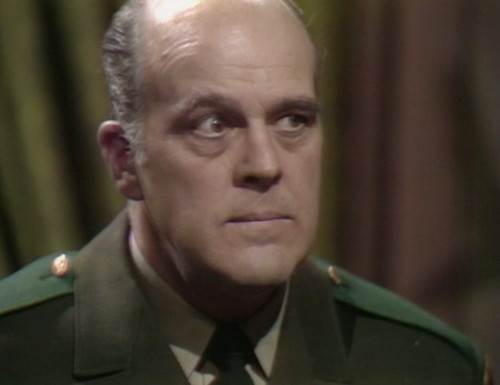 Now, we know this interrogation is pointless, because we have a functioning sense of televisual literacy. Barnabas is the main character of the show. Patterson is recurring at best, and he’s been played by three different actors in the last nine months. And this one is the short Patterson, too, so his attempt at crusading G-man is coming off somewhere around moody ice-pop salesman.

So he’s going to ask a lot of dumb questions, and Barnabas is going to lie. And that’s going to be the end of it, because what else can they possibly do?

The conversation gets a little off-track.

Patterson:  What about your servant, Willie Loomis?

Barnabas:  What about him?

Patterson:  I questioned him earlier. I didn’t believe one word he had to say. I had the feeling he was concealing something.

Barnabas:  Well, I’m sure Willie has nothing to conceal.

Patterson:  Then why was he so nervous when I questioned him?

Okay, a) once again the Sheriff is issuing bulletins about the progress of the investigation, and b) he’s asking Barnabas to account for somebody else’s feelings.

Barnabas:  Well, he told me that he had a very alarming dream last night, and he’s been upset about it all day.

And that’s when you know you’ve pretty much hit rock bottom in the field of detection. When your suspect starts telling you about someone else’s dream, it might be time for you to update your LinkedIn profile. 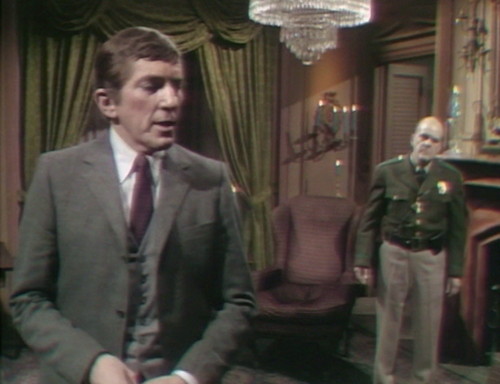 The traditional Dark Shadows backacting shots aren’t helping Patterson very much either. He’s already a foot shorter than Barnabas. In this shot, he looks like a G.I. Joe action figure.

“Sit down, Mr. Collins,” the Sheriff says. “You might as well prepare yourself for an ordeal.”

This gives him the height advantage, but referring to this as an ordeal makes the sequence feel a bit like the Spanish Inquisition sketch from Monty Python. All he needs is a deputy nearby to gasp, “Not the comfy chair!”

Barnabas:  Surely you don’t think that Dr. Hoffman helped this man in any way.

Patterson:  What I think, Mr. Collins, is this whole affair smells to high heaven! As far as I’m concerned, no one is above suspicion — including you!

Barnabas:  Sheriff, the man you’re looking for is probably some kind of vagrant. Now, what connection could I have with him?

Yeah, we can tell. Luckily, at that point a deputy comes in and reports that the man was spotted in the woods, headed for Widow’s Hill.

The police arrive on the scene just in time to find Carolyn slipping over the edge of the cliff. Adam is holding on to her, and she’s begging him to pull her up.

The Sheriff gives the order to stand back, and see how this scenario plays out.

So obviously, Adam saves her, no thanks to the worthless Sheriff, and with nowhere else to go, the monster jumps off the cliff to his death.

That about wraps it up for the investigation, so everyone goes home.

The next day, the suspect’s body is scooped up, booked, and brought to trial. In a moment, the results of that trial.

Monday: After the Fall.

In the teaser, when Adam staggers through the woods, one of the police officers can be seen on the left side of the screen walking to his place, and then waiting for his cue.

As Barnabas paces around the Old House drawing room, he hears the sheriff outside telling his deputies, “Keep your eyes open; this is where we picked him up last.” But the sheriff’s line isn’t muffled enough, and it sounds like he’s just on the other side of the room.

Sheriff Patterson tells Barnabas that it took six men to subdue Adam. When he told the same story to Julia and Willie on Wednesday, he’d said it took twenty men.

Adam now has a comically tiny length of chain attached to his ankle — just a few links, which don’t even reach the ground. The sound effects man has a different opinion.

When Adam grabs Carolyn as she’s trying to escape, she knocks one of the fake rocks over.

When Adam brings Carolyn to the top of Widow’s Hill, the studio lights can be seen at the top right. After a cutaway to some footage of waves crashing, you can see a stagehand on the left.

James Shannon plays the Deputy who talks today; he was also in yesterday’s episode. We’ll see him again as an 18th-century Guard in November.

Tom Murphy plays the Deputy who doesn’t talk. This is his third and last episode on the show. He played the Chauffeur in the first episode, and a Blue Whale patron in 1967. His IMDb page says that he’s “known for Love-In 1972 and Dark Shadows.” He is not actually known for either of those things.

Monday: After the Fall. 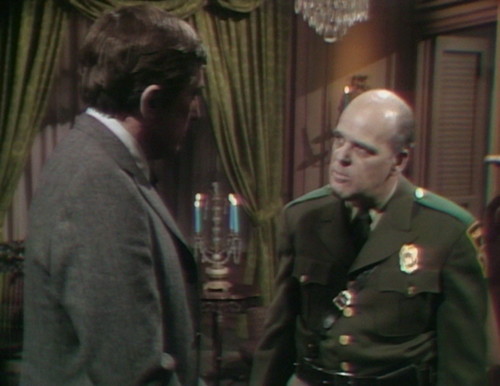 24 thoughts on “Episode 505: The Sinking Detective”