“If you’re gonna believe that thing who can’t even talk before you believe me, I don’t have to stay here.”

Willie Loomis: World traveler, grave robber, handyman, mental patient — and always a survivor. He’s been bitten, beaten, shot in the back and thrown under the bus. And now he faces his greatest challenge: Babysitter of the Damned.

In his original run on the show, Willie was a tormented soul, following around after the vampire and worrying about all the people who were going to get hurt. Willie was the only one who knew all the terrible secrets of the Old House, and he was desperate to stop things before they got completely out of control. For his pains, he was shipped off to a mental institution for the crimes that Barnabas committed.

Now Willie’s back on the show, and he’s a bit more slap-happy this time. He’s not the only one who knows the vampire’s secrets anymore — in fact, he doesn’t really have any idea what’s going on. He doesn’t know who Angelique is, he doesn’t understand the Dream Curse, and he’s only vaguely aware of where this second-hand Frankenstein came from.

Somehow, while he was away, Barnabas and Julia built themselves an insane little nuclear family, and all of a sudden, Willie’s cast in the role of the delinquent older brother.

Now, the other day, when Willie was first put on nanny duty, he was terrified of Adam, as he should be. Adam is a giant corpse monster stitched together from an indeterminate number of regular-sized corpse monsters. He’s inhumanly strong, completely unpredictable, and there’s a very good chance that he’s going to burn down a windmill someday.

But if there’s one thing that Willie’s good at, it’s getting used to monsters. By now, fear has turned to contempt — for Adam, for Barnabas, and, to be honest, for himself. This is not the life that Willie wanted. 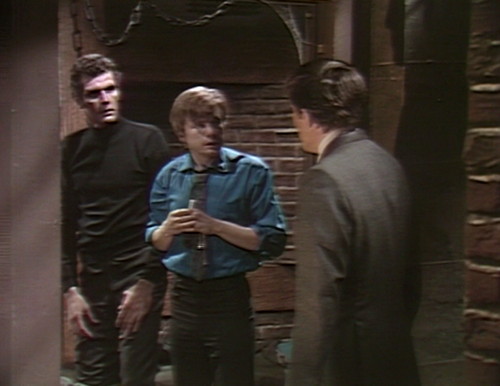 Barnabas comes downstairs to the basement dungeon where he keeps all of his failed experiments, and catches Willie teasing Adam with a shiny bracelet.

This comes from a secret cache of priceless family heirlooms hidden behind a secret panel in the walls of the dungeon. This makes absolute perfect sense, because if you build a mansion that has a jail cell in the basement, then obviously that’s the most logical place to store your valuables. I mean, that’s just good architecture.

Caught with his hand in the antique cookie jar, Willie claims that Adam found the jewels on his own.

“I don’t think Adam agrees with you, Willie,” Barnabas says. “I don’t think he believes you any more than I do.” Adam doesn’t look like he wants to get involved.

So Willie has a display of teenage temper, along the lines of “I didn’t ask to be born, you know.”

Willie:  Okay, I quit. If you’re gonna believe that thing who can’t even talk before you believe me, I don’t have to stay here.

Barnabas:  Don’t you? Where will you go, Willie? Back to Windcliff?

Barnabas returns the bracelet to the jewel box.

Willie:  Ya know, I wouldn’t have even come outta Windcliff, if I’d known that I was just gonna have ta babysit for him.

Barnabas:  And you’re doing a very poor job of that, judging by this.

Willie:  Well, why do you always take everybody else’s side, and never mine?

It’s adorable. You honestly can never tell what Willie’s going to be like in a given episode. Sometimes it’s Our Town, and sometimes it’s A Streetcar Named Desire. Today, he’s the troubled teen from an educational short about juvenile delinquency.

And things are about to get tough for Willie, because Barnabas has noticed that Josette’s emerald earrings are missing from the box. Last week, Willie stole those earrings and gave them to Maggie, for reasons that only he understands.

Barnabas wants to know what happened to them, and Willie, bless his heart, tries to pin the blame on the monster.

Barnabas says, “Well, it would be very simple to find that out.”

“Maybe he even dropped ’em on the floor!”  Willie cries, and starts scrambling around under the cot. 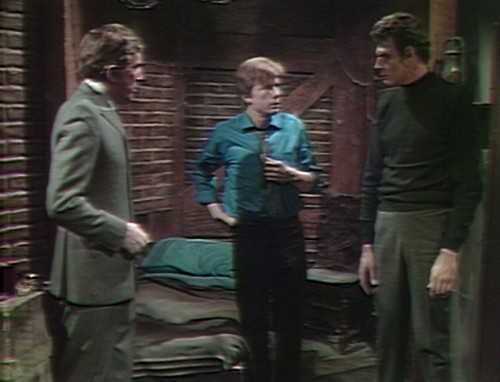 This is not a well-thought-out plan. Willie, sweetheart, what is your endgame here? This is a tiny little basement cell. What are you going to say when you run out of places to look, which should happen sometime in the next eighteen seconds?

He ate them? He’s planning to open a jewelry store? He’s secretly a transvestite, and he’s preparing for an early production of The Rocky Horror Show?

Luckily, Barnabas is suddenly called away on important vampire business, so Willie’s off the hook for now. But when he comes downstairs later in the evening with Adam’s supper, he’s in a sullen mood.

“Don’t you growl at me,” Willie sneers. “I brought ya your snack. Ten o’clock feedin’ for the baby.”

Adam’s leg is still chained to the wall — and as he lunges for the plate, Willie comes up with another brilliant idea. Adam’s been learning new words, and maybe he can learn some more. 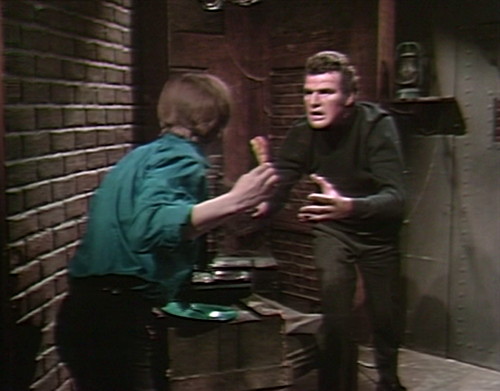 Willie picks up a chicken leg, and holds it just out of Adam’s reach. Adam’s confused, and cries out, “Barnabas. Barnabas!”

Willie:  That word don’t do nothin’ for me. You may get what you want from him by sayin’ that, but you better learn to say somethin’ different for me! You want the food? Huh? Say “I”. 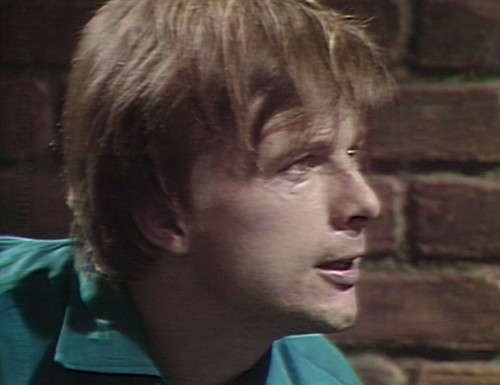 And just look at John Karlen. He’s taunting a monster with a chicken leg, and his eyes are lighting up with the intensity of a man who’s just decided that today he’s doing Cat on a Hot Tin Roof.

Willie:  Come on, what’s the matter with you, can’t you even say “stole”?

And now they’re just screaming at each other. 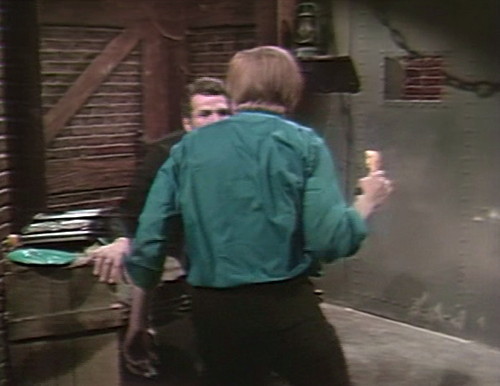 And then he struts across the room, dangling the chicken leg, and at this point, I don’t even know what play he’s doing. He’s in a whole other place.

Willie:  Now, you look here. You’re supposed to learn somethin’ new every day, that’s what his highness, Mr. Barnabas Collins, said. And today, you know what you gotta learn? You gotta learn to say, “I – stole – the earrings!” Come on, now! You say that or I’m gonna eat this, you got that?

So that’s our television show today. An angry Bayou babysitter, torturing a Frankenstein monster by eating a chicken leg at him. I believe that may be a first for daytime TV. Willie Loomis is always breaking new ground; that’s why I love him.

At the end of yesterday’s episode, Cassandra took her portrait off of Sam’s easel and carried it away, leaving Sam wandering around the room blind. Today, when Maggie enters, the easel has moved to another position, and there’s a different painting on it.

After Willie suggests that the earrings might be in Adam’s bed, there’s a chair scraping sound from the studio.

Julia clearly has no idea how to use the opthalmoscope. She just waves it in front of Sam’s eyes for a few seconds, and makes her diagnosis. A few minutes later, she tells Barnabas that “the optic nerve has been damaged,” and “the nerve ends are pale now.”

The music sound effect isn’t quite synched with Adam turning off the tape recorder.

Adam is supposed to be straining to reach Willie and the chicken leg, but the chain is clearly hanging limp. The set isn’t really large enough for Willie to hold the food out of Adam’s reach, so they just pretend.

When Willie makes his exit through the cell door and Adam follows, the wall wobbles.

Upstairs, Adam pounces on Willie, and then they obviously “freeze” for a second as the camera cuts to Barnabas and Julia approaching the front door.

In an interview recorded for the Dark Shadows DVD set (disc #57), Robert Rodan mentions this as a special favorite of his: “Johnny Karlen and I had some wonderful, wonderful moments together, particularly in the early times when I was chained in the basement. If anybody remembers that particular scene with the chicken leg, where John was tantalizing me — Willie, that is — tantalized me with that chicken leg. We just had such a wonderful time with that.”