And meanwhile, in the present, everybody is still standing around in the drawing room, waiting patiently to finish the scene that they started four months ago.

This is a weird thing for a TV show to do. It’s so weird, in fact, that the opening narration — which usually lasts about thirty seconds and doesn’t mean anything — actually goes on for three minutes, all the way through the opening titles and into the first scene, just to make sure we know what’s going on.

Yes, we have finally reached the end of our uncertain and frightening journey into the past. Four months ago, the Collins family held a seance which — as seances often do — catapulted their governess, Victoria Winters, back to 1795, to catch up on the ancestral backstory. As it happens, she didn’t actually learn that much, because she spent a lot of time getting herself convicted of witchcraft, and sentenced to hang.

“And now,” the narration explains as Vicki takes her place at the gallows, “two moments in time are parallel. During one tick of a clock in 1968, months have passed in 1795. Now, only seconds remain.”

Which is interesting, because the last time we saw 1968, it was actually 1967. But that’s time travel for you, I guess.

Obviously, the decision to take a four-month detour in the storyline was a bold creative risk — putting everything on pause, and basically rebooting the show with a different set of characters.

But the trip back is fairly treacherous as well. The whole reason why they went to 1795 was that the Barnabas storyline was rapidly running out of story options. Introducing Barnabas, and then pairing him with Julia, was a huge success — turning a ninth-place series into the most popular daytime show in a matter of months. But that story was being stretched to its limits, and was just about to break the show completely.

The problem with the storyline circa October 1967 was that they were running out of people to menace. When Barnabas was introduced as a new villain, his malign influence was mostly felt outside the Collins family. It impacted on Maggie, Joe, Sam, Willie, Burke, Dr. Woodard — basically every character that didn’t actually live in Collinwood. The vampire was the B-story to the Liz/Jason/Carolyn blackmail A-story. 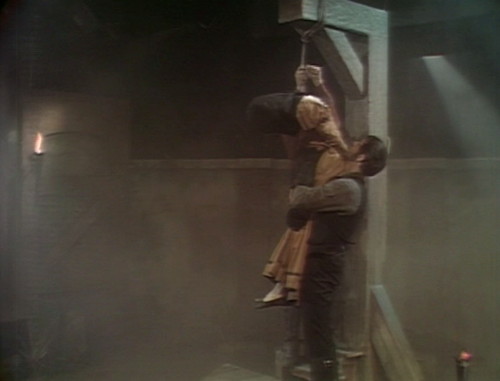 But the vampire story was fun, and the blackmail story went exactly nowhere, and so — according to the fiercely Darwinian law-of-the-jungle logic of writing serialized narrative — the supernatural element graduated to A-story status.

Naturally, an A-story needs to involve the A-characters, so we got Vicki being hypnotized, Carolyn falling under Barnabas’ thrall, and David being menaced by a marionette bat.

But things rapidly descended into open warfare, with Barnabas and Carolyn on one side, Julia and Tony on the other, and David and Vicki trapped in the middle. Casualties were starting to pile up.

Pretty soon, they were going to get to the point where there were only a few possible outcomes: #1. Kill David. #2. Kill Barnabas. #3. Just divide up the Collins family into vampire-supporters and vampire-slayers, and start killing everybody.

None of these options were productive for long-term story development, so the four-month side trip gave the writers the opportunity to regroup, come up with some new ideas, and make some decisions about how they can turn this dead-end storyline into something that can become a sustainable show. 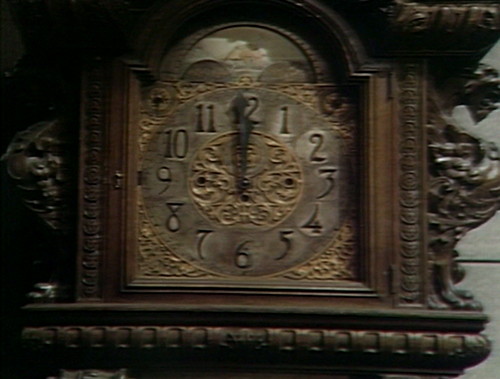 So as we return to nineteen-sixty-mumble for another tick of the clock, the question is: How do they use what they learned in 1795 to change the dynamic of the present-day story?

Well, to start with, Vicki comes back, changing places again with Phyllis Wick, the 1795 governess who got to sit in Vicki’s chair for a minute, and then got back to the eighteenth century just in time to have her neck snapped.

This is kind of a raw deal for Phyllis, but never mind her. Victoria Winters fell on the floor, and now everybody has to cluster around her and pretend to care.

It’s not very common for Dark Shadows to put six characters together in a scene, so they take advantage of it by having everyone spout confused rhubarb like “I don’t understand!” and “She’s not there!” This is supposed to sound like a murmuring crowd, but really only Carolyn and Julia bother to do it, and Julia talks louder than everyone else anyway.

They manage to manhandle the semi-conscious Vicki over to a couch, and then Carolyn says “I don’t understand!” And that’s why this is one of my favorite Dark Shadows episodes of all time.

That’s followed by the second best thing about the episode, which is that Julia instantly comes out of the closet. Grabbing Vicki’s wrist, she starts making diagnoses, and then startles everyone by admitting that she’s a doctor, not a family historian as she claimed to be.

And there you have it — Vicki’s return from the past has already inspired a change in the status quo, and she’s not even conscious yet. Best of all, it’s a change that brings more attention to Julia, the real star of the show.

And cue more fireworks. Julia asks Liz if they have any smelling salts, and Carolyn says that she knows where they are. Raising a well-placed eyebrow, Julia turns and asks, “Shall I trust you, Carolyn?”

Carolyn is taken aback. “Why shouldn’t you?” she says, glowering, and then makes a dramatic exit in the direction of the smelling salts.

This is a remarkable moment, because they’re expecting the audience to remember that Carolyn and Julia had a strained relationship in the weeks leading up to the 1795 trip. That’s a pretty bold expectation for a show that used to feel the need to do long recap scenes about a dream sequence that we’d seen earlier in the episode. They’re jumping straight back into things without losing a step, as if this really was just a tick of the clock.

Naturally, Barnabas is completely freaked out — he recognized Phyllis as his little sister’s governess, and he needs to know how much of his cover has been blown. His interaction with Vicki is not comforting for him.

She opens her eyes, and smiles at him. “Barnabas!” she cries. “Why, Millicent was right. She said you weren’t dead! Oh, I’m so glad.”

This is going to happen several times over the next few episodes — Vicki gets confused about whether she’s talking to the 1795 Barnabas or the 1968 Barnabas. It’s tremendously effective at putting Barnabas on the defensive, which is half the point of this whole bonkers plot contrivance.

The other half is tipping the balance back towards Julia. She gets to play doctor again, as they notice that Vicki’s got a gunshot wound in her shoulder, and rope burns around her neck. Julia asks Roger to help bring Vicki up to her room. 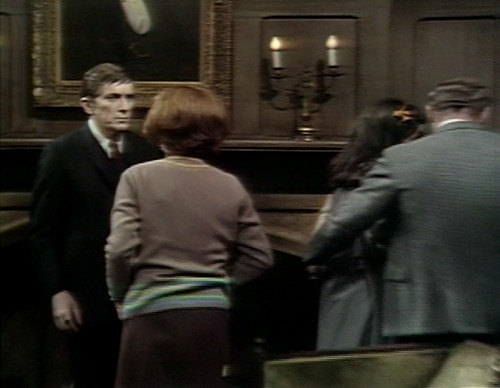 At this point, Barnabas is desperately trying to stay relevant.

Julia:  That will not be necessary.

Barnabas:  Are you in charge here?

Julia:  For the moment, yes.

And then she stands right in front of Barnabas and stares him in the face, before turning and escorting Vicki out of his reach. She’s basically treating him like he’s the aging silverback gorilla who just lost his status in the troop.

Barnabas is left downstairs with Liz, who starts questioning him more pointedly than she ever has before.

Liz:  The short time that Miss Wick was in this room, Vicki didn’t even have time to get into that dress.

Barnabas:  Well, perhaps their time is different from ours. Perhaps a moment of our time is a month, or a year of theirs.

Liz:  You really do believe it, don’t you? You really believe that Vicki saw Millicent Collins.

Liz:  You do! I can tell by your face that you do! You always have knowledge that we don’t.

Barnabas:  That is not true, Elizabeth.

Liz:  You knew that Miss Hoffman is a doctor.

Barnabas:  I… found that out, yes.

Liz:  Well, why didn’t you tell us when you did? For the same reason you’re not telling me what you figure happened this evening?

Barnabas gets a reprieve from this line of questioning when Julia comes back in, but there’s another burn coming.

Julia:  Excuse me — I’ve given her a sedative, but she asks for you.

So: Ouch. Liz leaves the room, and Barnabas and Julia are left together, facing off like gunslingers at a showdown.

He paces towards her, trying to make her flinch. She stands her ground.

Barnabas:  You’re not going to let me see her, are you?

Julia:  You are worried, aren’t you?

Barnabas:  And you’re enjoying it.

She smiles, and then assumes a false air of concern.

Julia:  What will you do if your beloved Vicki is telling Mrs. Stoddard now? You’re always in such control of everything and everybody. It’s quite interesting to see you when you aren’t.

And there you have it — that’s the new mission statement. That was the problem that needed to be solved.

It’s true, Barnabas was in complete control of the late-67 storyline. He held Carolyn in an ongoing hypnotic trance, he’d driven David from the house, and he was well on his way to driving Julia out of her mind.

That’s why we were heading towards a storyline crash — Barnabas had become so powerful in the story that he could just start killing all of the other characters one by one, the way that he did in 1795. The detour through time actually allowed the writers to road-test that version of the character, to see what happens when the vampire tears his way through the entire cast.

What they learned from that exercise was that it’s not a sustainable way to run a soap opera. In the last six weeks, they basically ran out of A-story characters, and they had to completely mind-swap Nathan’s personality in order to keep things moving.

So the writers are now speaking directly through Julia. She’s exactly right; it really is quite interesting to see Barnabas when he’s not in control of the situation. In fact, that’s so interesting that it becomes the dynamic of the show for the next three years. Starting today, Barnabas is going to be on the back foot — constantly surprised, baffled and outmaneuvered.

Vicki just fell through a hole in the world, blowing Barnabas’ plans to pieces. It turns out that’s exactly what we needed to throw Barnabas off balance, and the show will be better for it.

So: welcome back, Vicki. You’re just in time.

In the teaser, everyone in the drawing room is frozen in time, except Roger, who adjusts his jacket cuffs.

A moment later, as we see the hangman testing the gallows, someone sneaks across the bottom of the frame, ducking to stay out of the shot.

When the hangman takes the bag off of Phyllis’ head, she blinks.

When Roger and Carolyn help Vicki out of the drawing room, the boom mic is seen in the top left of the frame.

At the beginning of act 3, as Julia enters Vicki’s room, there’s a backstage clatter, which startles her for a moment.

Phyllis Wick is played by Margot Head, in her only episode. (At the start of the seance, in episode 365, Phyllis was played by Dorrie Kavanaugh.) According to IBDb, Head appeared in two Broadway musicals — as an understudy in Half a Sixpence in 1966, and a small part in Georgy in 1970.