“What really upsets you is the fact that you chose the losing side in this battle between the Almighty and the forces of Evil!”

At the top of today’s episode, vampire recluse Barnabas Collins asks his servant for an update on current events. Ben says that he was at Vicki’s witchcraft trial today, and stayed late to hear the verdict.

Barnabas pauses, and says, “I don’t like the expression on your face, Ben.”

Look, dude, you’ve had just as much time as the rest of us to get used to the look on Ben’s face. It’s a bit late in the day for constructive criticism in that department. 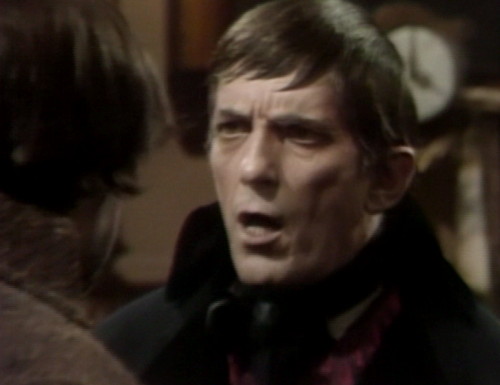 Anyway, it’s hardly fair — there’s no way that Ben can even compete with Barnabas in the melodrama department, not when they’re serving up bombshells like the surprise witness at Vicki’s trial. Ben explains that things were starting to look promising for Vicki’s release, until Barnabas’ dead wife, the witch Angelique, walked into the courtroom to testify.

Barnabas assumes his most shocked expression, and gasps, “Angelique!”

Which is great. That’s one of my favorite Barnabas catchphrases. He says her name that way every time she makes one of her surprise supervillain returns, which happens a lot more often than you might expect.

Unfortunately, they haven’t quite figured out if Angelique still has a role in this storyline. Barnabas comes up with a belated explanation for why she even bothered to show up at the trial — “she knew that Miss Winters’ acquittal was something that I wanted, and she wouldn’t allow me the satisfaction of helping her” — but it rings hollow. The real reason why Angelique showed up was that it was Friday, and they’ve got Lara Parker just standing around, waiting for another chance to be evil.

They don’t really want to commit to giving Angelique a meaningful place in the storyline right now — after all, they only killed her a little over a month ago. So once the Stunned Barnabas Face wears off, there’s nothing else to do but change the subject.

So we do a quick pivot to Crafty Barnabas Face, as he resumes his favorite hobby, which is planning cold-blooded murder. This time, the target is Reverend Trask, the shouty witch hunter who railroaded Vicki all the way to a guilty verdict. That’s bad enough to qualify him for Boss Battle status, which means Barnabas gets to flex his kaiju muscles and stomp on another giant monster.

Just to make sure we’re on board for the murder scheme, they offer up a scene where Trask menaces Naomi, one of the few nice characters who’s still alive and at large.

Now that Trask’s secured a conviction, he wants to search Vicki’s room at the Old House and destroy her remaining possessions. This is a funny little moment of historical accuracy, achieved entirely by accident in a “stopped-clock is right twice a day” scenario.

This is actually something that happened during the Salem witch trials in 1692. The local constabulary ransacked the homes of the imprisoned witches, confiscating their furniture and farm equipment, breaking whatever they couldn’t carry, and — in a weird detail that’s survived through the centuries — dumping out the beer in John Proctor’s tavern and carrying away the barrels. This wasn’t really done out of a religious desire to destroy the Devil’s handiwork — it was mostly a way to recoup the expense of housing and feeding the prisoners while they languished in jail for almost a year — but it’s the closest brush with history we’ve had in a little while.

Naomi:  I will not allow you to set foot in that house.

Trask:  Mrs. Collins, I realize that my presence here upsets you.

Trask:  May I suggest, Mrs. Collins, that what really upsets you is the fact that you chose the losing side in this battle between the Almighty and the forces of Evil! You aligned yourself with the Devil himself! 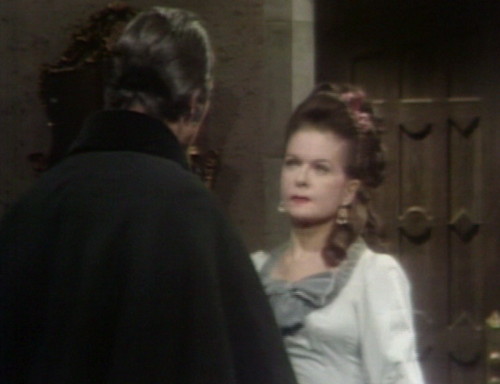 and WHAM! She smacks him across the face.

It’s a good slap, too; nice follow-through. This is actually the second slap in a row this week — Peter slapped Vicki yesterday, to knock her out of a panic attack. Dark Shadows used to be a relatively genteel show; I think they’re getting more physical all of a sudden. I kind of like where this is heading, especially if characters like Trask are on the receiving end.

But that’s not the only tough moment for Trask today. Arriving back at his quarters, he gets the first dose of what appears to be Barnabas’ multi-step plan to torment and then kill the guy.

So we’ve got a minute of Barnabas off-stage breathing heavily into a microphone, and calling Trask’s name with a throaty growl.

Barnabas:  Your victims, Trask! Your innocent victims! The chained… the tortured… the miserable creatures condemned by you!

Now, you might ask at this point why — if Barnabas is planning to kill Trask — he feels the need to first give him an annual performance review. But the tormenting is actually the main event, from the audience’s point of view. We’ve spent months watching this guy abuse everyone he comes into contact with. He really is a full-fledged monster in his own right.

So it would be unsatisfying just to have Trask turn up dead one day. Barnabas has to spend some time playing with his food, like he did with Abigail last week. That’s the point of the new kaiju rules — you have to give the monster a final chance to show how much he deserves the punishment, and you have to take the time to make him confront what he’s done before you finally pull the plug. 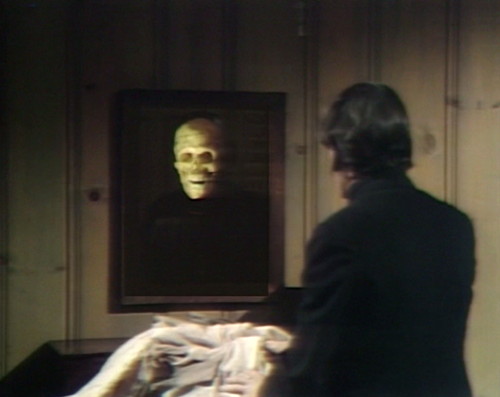 Happily, that means there’s time for some new crackpot vampire abilities, courtesy of whatever “powers of darkness” Barnabas suddenly has access to. This includes some great Spectacle shots, including a lovely Chromakey skull appearing in the mirror just at the same height as Trask’s face. 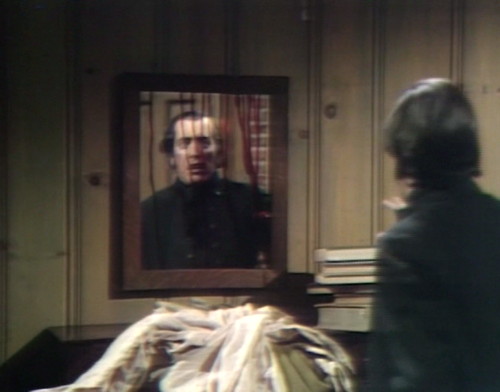 Following that, there’s a gush of blood streaming down the mirror…

And then the final surprise — a Chromakey hand reaching out to menace Trask with its… scary… fingers. I guess? 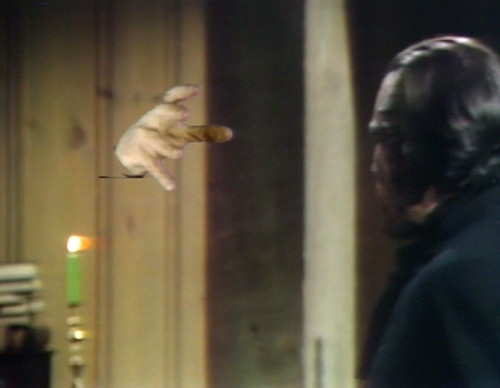 Cause honestly, the hand just kind of floats in midair and wiggles at him, while we hear chains rattling and Barnabas cackling away.

But, oh, it’s a lovely surprise, isn’t it? I’m pretty sure they weren’t ending episodes of The Secret Storm like this. If you stop to ask how Barnabas figured out that he had this particular bonkers power kit, it seems utterly silly, but the key to Spectacle is that we’ll accept absolutely anything, as long as it’s new and surprising. As always on television, impact is more important than sense.

At this point, we could have Barnabas appear in the room with a wand and a top hat, shouting Alakazam! and then making Trask explode into a thousand wriggling cockroaches, and we’d still be parked in front of the TV the next afternoon to see another installment.

Looking at the first minute of today’s episode, you’d never guess that this is how the last minute would play out. That’s what Dark Shadows is for, and today they delivered. Bless their devilish little hearts. It must be magic.

Tomorrow: Something About That Hate.

Reverend Trask has a bandage on the middle finger of his right hand. The clearest place to see it is early in his conversation with Naomi in the Collinwood foyer, when he’s holding his hat.

Naomi follows up her slap by telling Trask, “Don’t you ever talk to me a way — that way again. Do you understand?” A moment later, she trips again: “It’s one thing to strike Miss Winters, who can’t find back — fight back.”

After Trask walks upstairs, Ben puts his hand on the staircase post, and watches Trask go. The post wobbles noticeably.

When Trask leaves the Old House, the camera pulls back too far, exposing the spot where the staircase bannister stops.

After the blood streams down Trask’s mirror, it was supposed to shatter, thanks to a blow from behind. But the mirror doesn’t break, so you just hear a loud thump.

The last time we heard about Barnabas’ onyx ring, he was upset to hear that Josette had lost it. He’s wearing it again today, but there’s no mention of when and where he found it.

Tomorrow: Something About That Hate.