“Miss Winters has come from Boston, and she was found — she was brought up in a foundling home.”

Phew, we made it! It’s been a long four hundred and four episodes, but we’re here at last. Our long national nightmare is over. Victoria Winters, girl governess, is finally behind bars where she belongs. 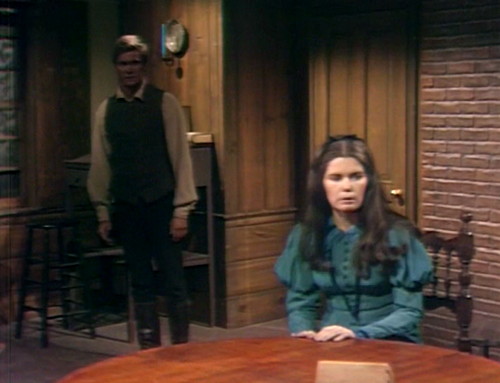 I mean, it’s not like she’s guilty of anything in particular, unless you count obstruction of television. There she sits, our quote-unquote lead character, just waiting around for something to happen.

A month and a half ago, Vicki was sent on this uncertain and frightening journey into the past, back to the year 1795, so she could learn the terrifying secrets of the 18th-century Collins family. But she hasn’t learned a damn thing, naturally. She spent most of her time governessing, and then she was tied to a tree for a while, and now she’s in lockup. Meanwhile, the terrifying secrets have been unfolding, just elsewhere and with more interesting people.

Recently, she was accused of witchcraft and locked up in jail, which is odd, because the last witch trials in the United States happened in 1692, more than a century before this. But honestly, when something like Victoria Winters happens to your life, you don’t spend a lot of time brushing up on the latest trends in jurisprudence. You handle the situation.

Barnabas has promised to help Vicki, but as we’ve seen recently, Barnabas is not one of the all-time great decision makers. He’s brought Judge Matigan to consult with Vicki about her case. This is not going to go well, for several reasons.

To start with, Judge Matigan is played by Addison Powell, who happens to be The Worst Actor Who Ever Appeared on Dark Shadows.

Addison Powell is a non-stop five-alarm wide-awake nightmare with kung fu grip. He is not healthy for children and other living things. 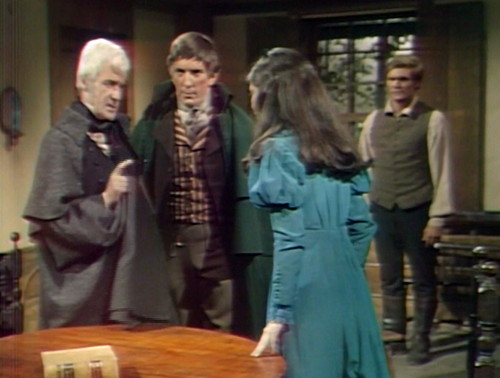 Here, check it out. He’s trying to talk.

Matigan:  Miss Winters, Mr. Collins has told me all about you. I’d like to help you, if I can.

Matigan:  Now, all you have to do is to answer some questions. But I want you to answer them hon – honestly.

Now, to be fair, I have to concede that he gets all the way through three and a half sentences before his first stumble. But then Barnabas and Vicki sort of nod and shuffle awkwardly, in a way that indicates that that wasn’t the cue he was supposed to give.

He is literally fifteen seconds into his first scene, and he’s already screwed up badly enough to bring the entire scene to a stuttering halt. 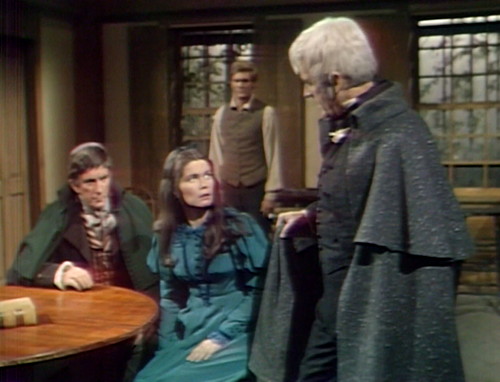 Okay, on with the show. He takes a lap around the table, yelling all the way. As an actor, Addison Powell only has two settings: loud, and not quite as loud. He moves around behind Vicki, positioning himself so that he’s facing away from the camera.

Matigan:  Now, first of all. Do you deny all of cr– Trask’s charges? Against you.

Matigan:  You deny that you ever practiced witchcraft.

Vicki:  Yes, and you’ve got to believe me — everything he said about me is absurd! 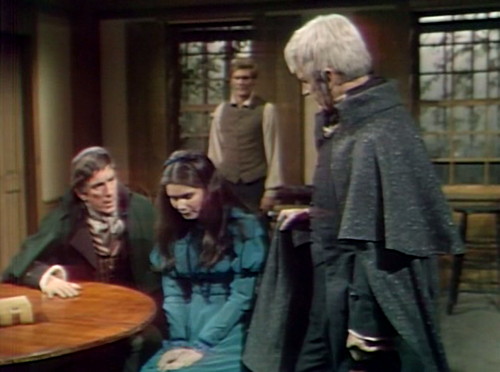 Nobody’s talking directly to Addison Powell during that line, so he stops acting. He just sort of shifts his weight, and waits for his turn again.

Matigan:  Miss Winters. I myself do not believe in witchcraft.

I know, I’m going super deep into the matrix on this one, but literally every single thing that he does is wrong. It’s maddening.

Hey, he’s on the move again. His next couple sentences are addressed to nobody in particular. 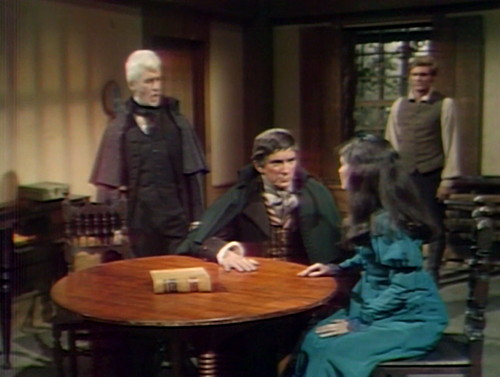 And here’s where you can observe his loud vs not-quite-as-loud acting technique.

Matigan:  No. But many people in this community do. BUT I KNOW TRASK, And I KNOW HIM for a COMMON CHARLATAN.

Matigan:  Now, when your case comes to court, I’d like the chance to defend you, so that I can EXPOSE HIM in court for the fraud that he really is. Now, ALL YOU HAVE to do is to cooperate.

Vicki:  Yes, I’ll do anything!

He fiddles with his hat pointlessly for a moment, and then starts rapping with his fingernails on the table to punctuate his loud words.

Matigan:  All right. First of all, Trask CONTENDS that you’ve been plotting against the Collins family. Do you have ANY reason for WANTING to HARM ANY member of the COLLINS FAMILY.

One of Matigan’s non-endearing traits is that every time Vicki speaks, he begins his next line by saying “All right.” This is Addison Powell’s way of indicating that the other actor has stopped talking, and it’s time for him to start acting again.

Matigan:  All right. In fact, SINCE. BEFORE, your arrival, in COLLINWOOD. Did you have ACQUAINTANCE with any MEMBER of the Collins family.

Matigan:  All right. Now, Trask BASES, bases MOST of his charges against you.

You can tell that Judge Matigan is a dedicated professional, because he squints a lot when he talks. By the way, I’m interrupting in the middle of his line here, because he doesn’t seem to know how commas work.

Matigan:  On the fact that your ARRIVAL. In Collinwood. Was under very mysterious circumstances. Now, what would you care to tell me about that. 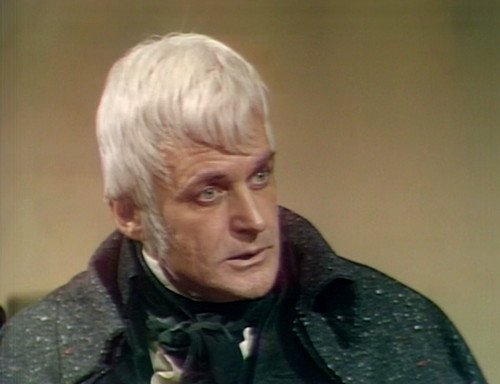 As you can tell, I’m trying to capture the essence of Powell’s performance, but there’s only so much I can do. By this point, he’s aggressively tapping on the table at random intervals.

I mean, at some level, I have to admire the guy. He’s definitely a compelling presence on the screen. Even if you happen to be looking away from the television, there’s no way to avoid recognizing that there’s a man furiously acting in your direction.

VickI:  I had an accident on the road.

Matigan:  WHERE were you coming FROM. WHERE did you LIVE. Before you came to Collinwood.

Barnabas:  I told you that, Judge.

Barnabas pauses for a second, and readjusts so that he can take a peek at the teleprompter.

Judge Matigan responds to this change in position by resting his hand on Barnabas’ wrist, and leaving it there. 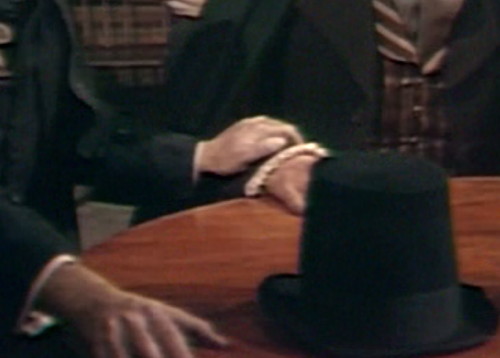 I don’t know why he does this. It’s the single most awkward acting choice that I’ve ever seen.

Barnabas tries to go on with the scene, with limited success.

Barnabas:  Miss Winters has come from Boston, and she was found in — she was brought up in a foundling home.

“I’m sorry,” Barnabas says, and pointedly moves his wrist out of stroking range.

But now our attention turns to Vicki. Matigan asks the name of the foundling home, and she’s lost.

She asks why that matters, and Matigan says that he’ll need to communicate with the foundling home, to find character witnesses. 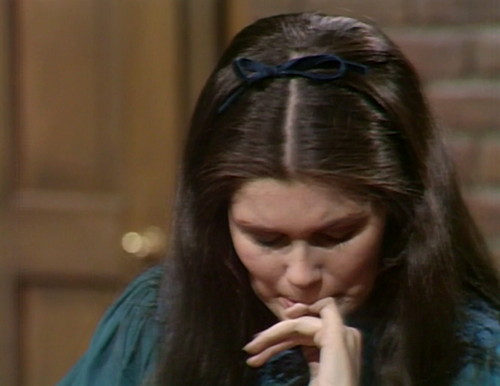 Vicki:  Because there’s no one.

Judge Matigan is stunned, and for once, I agree with him.

Vicki has been in the 18th century for weeks. The very first question she was asked is where she came from, and how she got to Collinwood, and that question has been raised again in every single scene that she’s been in. She was on the run from Reverend Trask for days, and now she’s been in prison for at least a day.

In all that time, she couldn’t come up with a cover story? Really? How has she been spending her time? 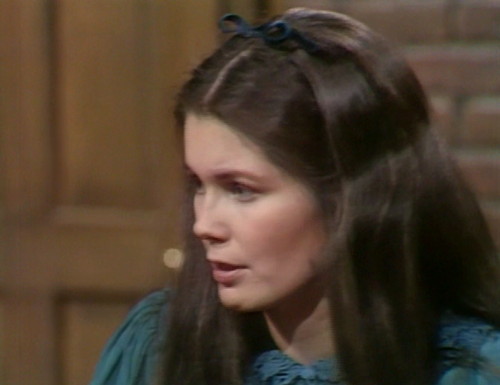 And then this happens.

Vicki:  He may as well know the truth, Mr. Collins.

Matigan:  What IS the TRUTH?

Vicki:  I come from… from another time, another place.

Matigan has been making this face the whole time, and now it’s finally justified. Ths is the acting equivalent of a stopped clock being right twice a day.

Matigan:  What do you mean?

Vicki:  Somehow, I was transported here from the future.

Vicki:  Yes. I work for a family. Well, the descendants of the Collins family, who will live two hundred years from now. 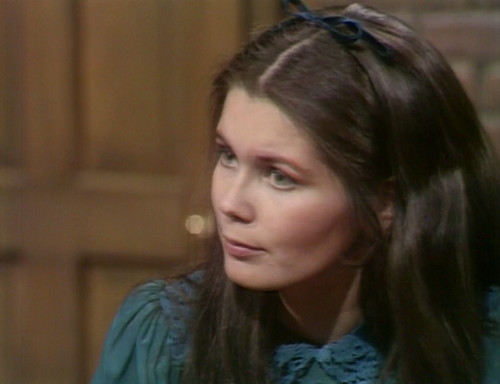 And that’s it. I’m done. There’s nothing more that I can say.

Obviously, this episode is just an escalating series of mistakes, starting with allowing Ron Sproat to write scripts anymore.

Also, Barnabas asks Josette, “Tell me this — did you willingly steal yourself away from me?”

Addison Powell was a close friend with DS producer Robert Costello, which pretty much explains everything. He actually has a decent resume, including an Obie-winning performance in the 1956 Off-Broadway production of Eugene O’Neill’s The Iceman Cometh. Powell’s hair turned gray when he was in his thirties, which meant that he got lots of parts as doctors and judges. He plays both on Dark Shadows.

This is Powell’s first on-screen appearance on DS. A few weeks ago, he performed the voice of Jeremiah Collins’ ghost. (Timothy Gordon played Jeremiah’s walking corpse.)

Powell will be back, unfortunately, playing Dr. Eric Lang when the story moves back to 1968. He also plays a Judge in one 1970 episode, during another witch trial storyline.

Also: The quiet young man standing in the background today is Peter Bradford, played by Roger Davis. I’m not going to get into it right now, but we’re going to see a lot more of him in the coming weeks and months.