“Something happened during the séance… something unnatural.”

A long time ago…

Vicki is confused. That’s not a particularly startling development, because she generally goes around in a state of ongoing bafflement, but this time she has a good reason.

The last thing she knew, she was sitting in the Collinwood drawing room, having a perfectly ordinary séance with her employers, just like anyone might at the end of an average day at work. Then a ghost started speaking through her mouth, and now she’s standing outside the Old House, and it’s a bright, sunny day.

As she approaches the house, Barnabas Collins opens the door, and he’s young and alive and engaged to Josette, and it’s the past. 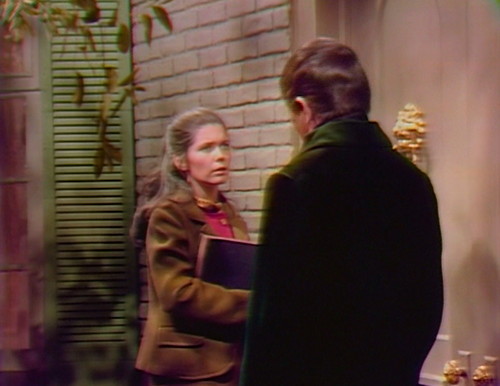 So I’m just going to put this right out on Front Street. Vicki isn’t going to figure this out right away, but you and I have no secrets.

This episode begins an uncertain and frightening journey into the past, traveling back to 1795 to find out how Barnabas became a vampire. And this isn’t just a quick flashback, as the audience must have assumed at the time. We’re going to be here for the next four months.

This has to be one of the most surprising storyline twists in television history. The only other example that I can think of is the third year of Josie and the Pussycats, when they suddenly sent the whole cast into outer space for a season. It’s that groundbreaking.

The 1795 story completely redefines what Dark Shadows is about. We thought this was the story of Victoria Winters, girl governess, and her struggle to find love and family connections in a big, dark house on a hill. Now it turns out that was Episode IV of a much larger story, and we’ll get a series of prequels playing out over the next few years. Welcome to Episode I. 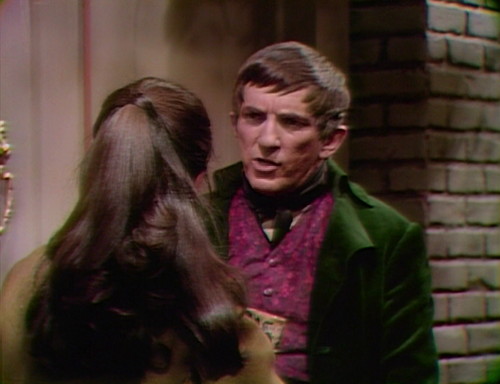 And look how cute young Barnabas is! He’s all perplexed. A complete stranger has appeared on his doorstep, and she knows his name. Like so many other people on the show, he’s happy and carefree, right up until the moment that Victoria Winters enters his life.

Vicki:  Why don’t you recognize me?

Barnabas:  Because I’ve never seen you before.

Vicki:  But you have, hundreds of times.

Barnabas:  Are you quite sure you’re feeling all right?

Barnabas:  You said that you were lost in the woods. Do you live around here, in Collinsport perhaps?

Vicki:  Why are you dressed that way?

You see what I mean? You just can’t talk to people like this. 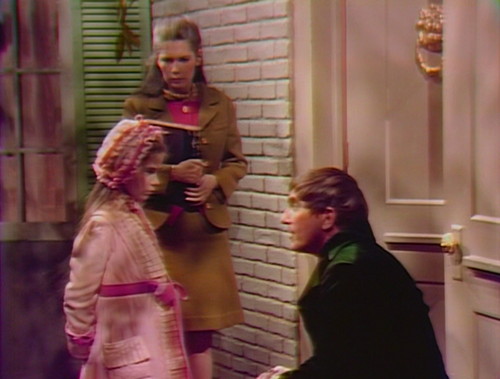 The past is pink, by the way. They’re indicating that this is a more innocent period by giving everything a rose-colored glow. It’s an odd choice, but very effective. The normally drab walls of the Old House are pink, and Barnabas’ shirt is a reddish-purple, and then along comes Sarah, who’s alive by the way, and she’s the pinkest of all.

Barnabas chides Sarah for coming outside when she’s supposed to be upstairs taking her nap. Then she spots Vicki, and exclaims, “It’s her! My new governess!” 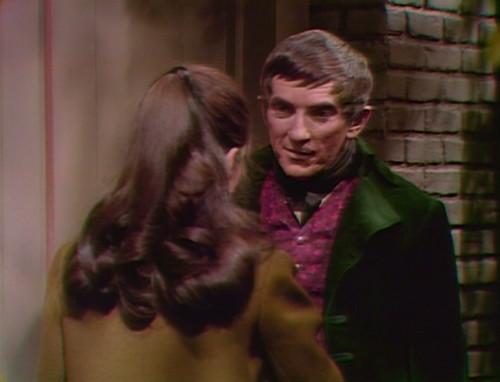 Barnabas shoos his little sister back inside the house, and tries to figure out what he’s supposed to do with the lunatic woman standing on his porch.

Barnabas:  Miss Winters, if you don’t know where you are, perhaps you could tell me where you’ve been, or where you’re from.

Vicki:  Why do you have to keep talking to me as though I’m a total stranger?

Barnabas:  Because you are.

Vicki:  No! How would I have known your name when I saw you?

Vicki:  Because I know you! Now, why must you keep pretending that you don’t know me?

Barnabas:  I’m not pretending. I consider it my loss that we’ve never met before, but we haven’t.

This conversation goes on for a full five minutes, and for a while, it seems like we might stay out here on the porch all day. 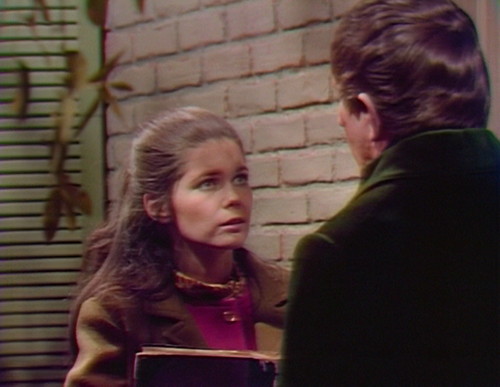 But it’s worth every second, because young Barnabas is adorable. He’s soft-spoken and charming, and he’s far more patient than he needs to be under the circumstances. The son of a prominent, wealthy family would be completely within his rights to tell the strangely-dressed vagrant at the door to get off his property. But he’s lovely.

Barnabas:  Now, listen to me, Miss Winters. I’m going to take you inside, and I want you to lie down until you recover.

Vicki:  I don’t want to lie down. I just want to know what’s wrong and what I’m doing here.

Barnabas:  Miss Winters, are you a governess, or are you not?

Barnabas:  Well, then, I suggest that you get hold of yourself before my mother comes back.

The point of this whole hare-brained storyline is to reboot Barnabas, and get the audience to love him. We’re five minutes in, and it’s working already. He’s got all of the charm of the 1967 Barnabas, and none of the rage. 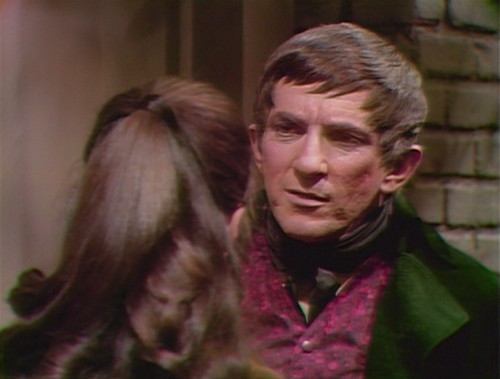 They choose an interesting moment for the act-closer.

Vicki:  But don’t you remember? We were sitting around the table in the drawing room of Collinwood.

Barnabas:  You’ve been in Collinwood?

Vicki:  Well, of course. I live there!

Barnabas:  I don’t know what you’re talking about. No one has lived there yet. The building is still under construction. 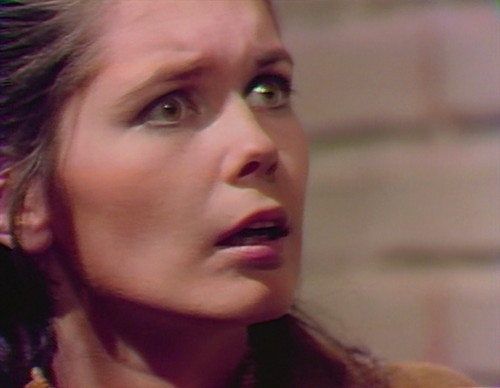 That’s the line that gets the dramatic sting, and Vicki’s stunned commercial-break face. This is a brilliant little detail that clarifies that this storyline isn’t just about the vampire curse. This is the origin story for Collinwood.

That’s important, because the show turns out to be bigger than just the story of Vicki, or Barnabas, or any specific group of people. More than anything else, Dark Shadows is the story of the house. The characters just happen to live there. 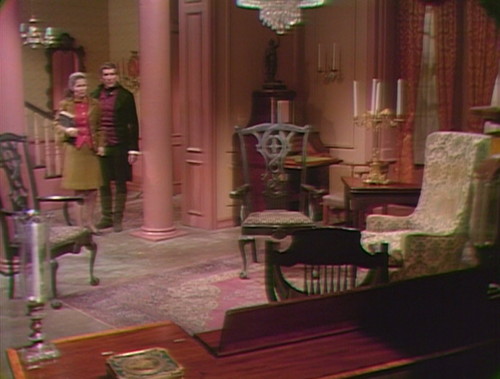 Barnabas finally brings Vicki inside, and if you thought things were pink before — inside, it’s even pinker. People who like pink: today is your big day. 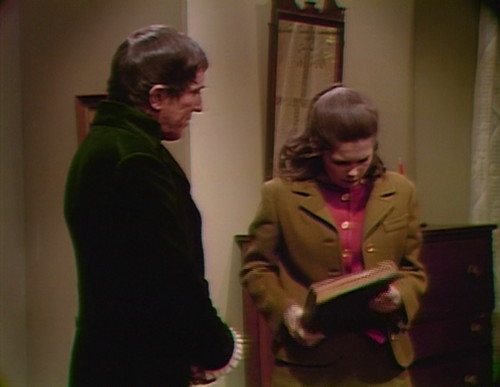 Barnabas is convinced by now that this perplexing creature is Sarah’s new governess, so he takes her upstairs and asks where her luggage is. She doesn’t know what he means.

Barnabas:  You mean to say that your belongings consist entirely of the book you’ve been carrying?

Now, I know she’s having a stressful day, but that’s kind of a scatterbrained moment. How do you not notice the thing that you’re holding?

Anyway, things settle down eventually. Vicki has another scene with Sarah, and that’s pretty much the end of the surprises for the day. 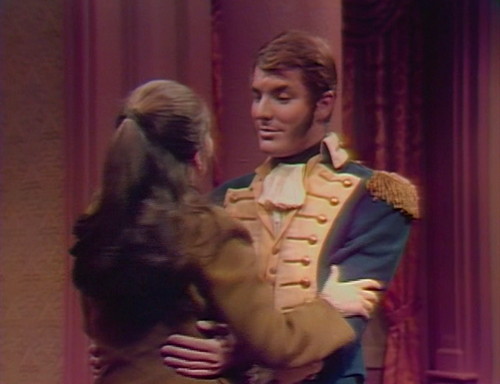 Oh, right. Except for this. 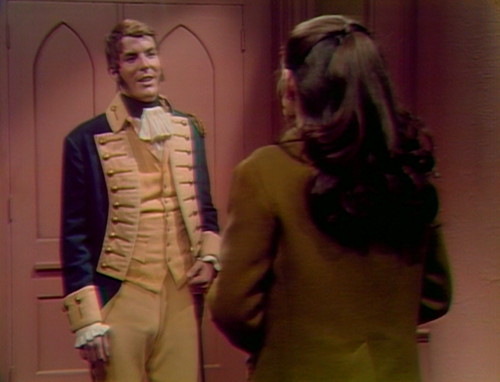 Vicki goes back downstairs, and she finds Joe hanging around in the drawing room. She runs to his arms, and gives him a hug, overjoyed to find a friend in the middle of this strange nightmare. But this isn’t Joe.

Forbes:  My… aren’t you a pretty one.

Forbes:  I don’t know who Joe is, but if that’s who you want me to be, it’ll be my pleasure.

And that’s the kind of fun we’re in for. Joel Crothers is the only hot guy on the show right now, but he’s been trapped playing Joe, a boring nice-guy character who’s mostly a talk-to recap monkey for Maggie, Vicki, Carolyn or anybody else who has something they want to get off their chest. 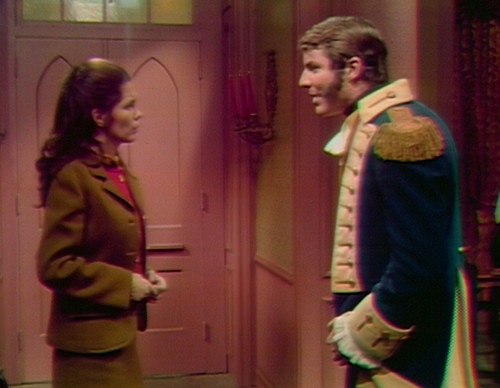 But this, as I said, is not Joe. This is Lieutenant Nathan Forbes of the United States Navy, a rogue and a scoundrel who’s apparently a Collins family friend.

Like Tony Peterson, who was introduced a couple weeks ago, Forbes is a visitor from a different narrative universe, thrown into Dark Shadows with the general remit to poke the characters with a stick and see what happens.

One inspiration is clearly Tom Jones, the original sexy scoundrel from Henry Fielding’s 1749 English comic novel The History of Tom Jones, a Foundling. The character was fresh in people’s minds in the mid 60s because of the popular film adaptation made in 1963, which won the Oscar for Best Picture. 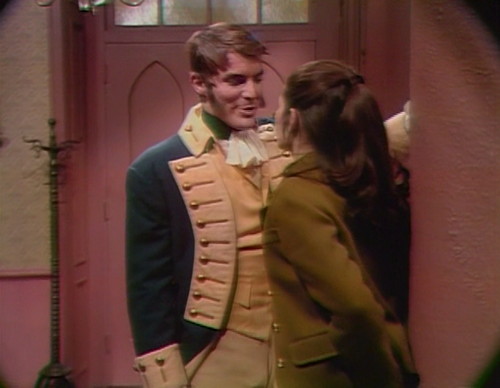 Here’s the moment that might as well be a direct quote from the Tom Jones screenplay:

Vicki:  What’s the matter with you?

Forbes:  Absolutely nothing. I happen to admire pretty women.

Vicki:  And you happen to be engaged to my best friend.

Forbes:  Well, I’ve been fought off by the ladies in some strange ways, but that may be the strangest. Now, who, may I ask, is your best friend?

Forbes:  Maggie… that’s a nice name. I once knew a scullery maid named Maggie Stuart. She was a trifle on the plump side, but she knew the way to a man’s heart. Why don’t we sit down?

There’s another major literary influence on the character — which explains why Tom Jones is wearing a naval uniform — but we’ll touch on that in a couple weeks.

(By the way, a note for readers who think that Forbes is fun and sexy: If you haven’t seen the 1963 Tom Jones film, that should be the very next thing you do. It’s fantastic.) 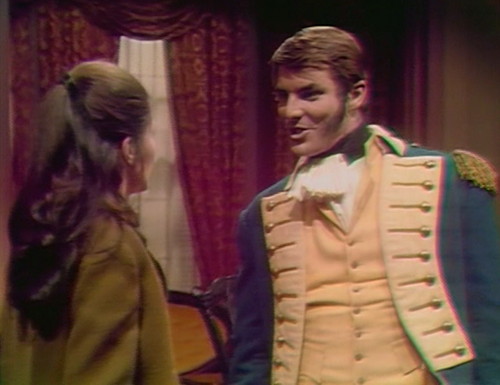 So this, really, is when you understand how 1795 works, and what it’s for. Up until now, we’ve just seen Barnabas and Sarah, and they’re just the living versions of their regular characters. Here’s where the audience is let in on the big surprise — that everyone we meet will be played by a member of the 1967 cast, trying on new characters.

And those new characters are a lot more interesting than their ’67 counterparts. This encounter signals that the new show is going to be a lot more fun than the old one. 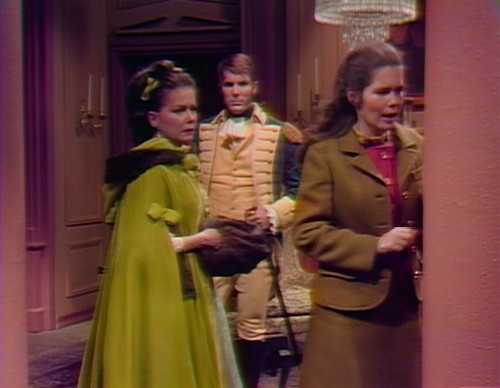 By the end of the episode, Naomi shows up, and she’s just as nonplussed as everyone else with this strange young woman who calls everyone by the wrong name, and can’t explain where she comes from.

And so it goes on, and on — we’re going to spend four months in this makeshift laboratory experiment of a storyline. We’re going to meet new characters every day for the whole week, each one crazier than the last. Just you wait and see.

Our phantom isn’t that menacing these days — she’s nine years old, and dresses like an American Girl doll — but the clones are ready to attack, starting tomorrow. May the Forbes be with you.

There’s a long pause while Barnabas leads Vicki upstairs. You can hear people rustling around in the studio, and then someone says, “Excuse me.” Then more footsteps and rustling, and someone coughs.

When Nathan comes in, he takes off his hat and cape, and puts them on a chair. They both fall on the floor. Nathan just leaves them there and goes on with the scene.

They’re also not sure what to do with the 1790s pants. You can see very clearly that Nathan dresses to the right. The same thing happens with Joshua’s pants in tomorrow’s episode. 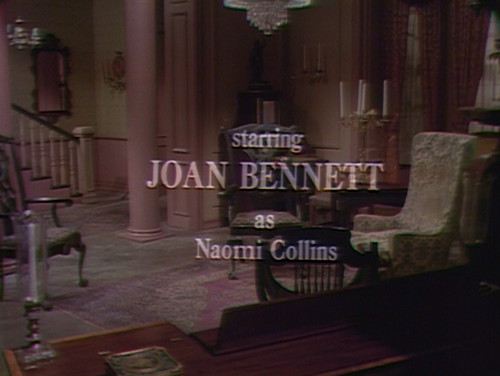