“I’m sorry, Maggie, it happens to be my favorite scarf, but if my touching it bothers you, I’ll stop.”

You know that it’s been a fairly static week on Dark Shadows when the first line of dialogue in Friday’s episode is, “How long are you going to stand there?”

Lately, I’ve been postulating a lot of hypothetical writer’s room drama, because things are starting to seem a little fraught in there. Gordon Russell handed Ron Sproat a pretty interesting situation this week — Carolyn, now under the vampire’s control, discovers that Julia is hypnotically conditioning Vicki to reject Barnabas’ advances — and now Sproat is handing it back, two days later, entirely unchanged. He basically just had everybody walk in place for a couple days.

So today’s episode opens with Carolyn asking Barnabas what the hell he’s waiting for. After all, he’s been talking about getting rid of Julia all week. What’s the holdup?

There’s definitely evidence that something strange is happening backstage — either a difference of opinion between the writers, or a mutual decision to shift gears.

Let’s look again at the end of yesterday’s episode, when Carolyn presented Barnabas with evidence that Julia was working against him.

Barnabas:  First, we must find a way to repair the damage that Hoffman has already done — and then she must be punished.

Carolyn’s eyes flash with delight, her mouth curling into a irrepressible grin.

Carolyn:  Are you planning to kill her? 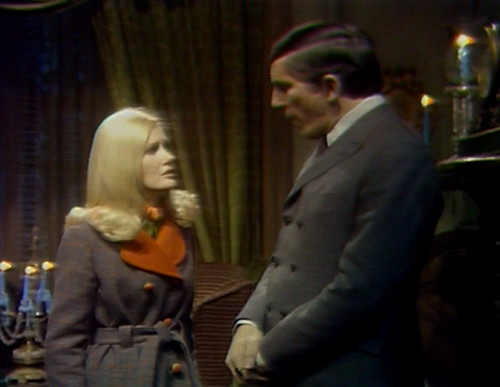 That was yesterday; here’s today.

Carolyn:  What are you going to do to her?

Barnabas:  What do you think?

Carolyn:  You can’t kill her.

Barnabas:  If she lives, she will go on obstructing my plans. I have no other choice.

And Carolyn spends the rest of the scene pleading with him, trying to find another way.

So… what just happened? Nancy Barrett is good at Dark Shadows, which means that she commits 100% to the melodrama of the moment. In this case, that makes the character’s flip-flop even more obvious.

Here’s what I know: this episode was taped five days after yesterday’s. There’s nothing special about that — they’ve been taping episodes out of order for most of this year, partly as a result of the actors’ strike in April, and the technicians’ strike in September. The taping schedule is going to stay mixed up through December, until it finally straightens out in January.

Yesterday’s episode was taped on a Wednesday, and today’s was taped on the following Monday. Sometime during that gap, somebody decided that turning Carolyn into a psychopath was probably a bad idea.

So now the vampire/servant dynamic has changed. Carolyn still believes in Barnabas’ goals, and she knows that she needs to help him, but they tone down the impact on her values system.

Carolyn:  Barnabas… I’ll help you do anything else, but I can’t do this.

Barnabas:  Be sensible, Carolyn. You really don’t have a choice, do you?

She doesn’t, really, but it’s nice to know that she hasn’t completely lost her humanity. That’ll probably come in handy later on.

Barnabas sends Carolyn to Collinwood to steal Julia’s notebook, which records all of the work she’s done trying to cure Barnabas’ condition. Barnabas thinks that the notebook is still hidden in Julia’s room, and he tells Carolyn to search the room.

Coming back to the house, she’s distracted by Maggie, who’s come over to visit Vicki. There’s not a huge reason for Maggie to be in this episode, except to point out the similarities between Carolyn’s situation and Maggie’s own past battles with vampire hypnosis.

Maggie’s memories of her vampire-related trauma have been wiped, thanks to Julia’s hypnosis, but she gets uneasy when she notices that Carolyn is behaving strangely.

This is my favorite moment of the episode:

Maggie:  You haven’t been ill or anything, have you?

Maggie:  I don’t know, it’s just that… you don’t seem to be yourself, and the way you keep touching that scarf, it just…

Carolyn:  Well, I’m sorry, Maggie, it happens to be my favorite scarf, but if my touching it bothers you, I’ll stop.

That’s one of those lovely “only on Dark Shadows” dialogue moments. Who talks like that?

That’s when the dogs start howling. This triggers more uncomfortable memories for Maggie, and she takes off. Carolyn finds Julia in the foyer, and they have an odd conversation about the dognoise.

Julia:  I was in my room working, but then a few minutes ago, I heard the dogs howling.

Carolyn:  And you got frightened?

Julia:  No, just a little apprehensive.

Julia:  Don’t you know what the howling of the dogs means?

Julia:  Well, it means that Barnabas is upset about something, and he’s getting ready to do something about it.

That’s all they know about it, which is too bad, because I’d love to know the mechanism for how that works. Is Barnabas consciously giving the dogs a cue, or does it just happen automatically whenever he’s feeling stressed?

In reality, of course, the dognoise is intended to be mostly metaphorical — as if Barnabas’ unnatural existence is causing the natural world to cry out in desperation and fear. It might not be just the dogs who can feel it — for all we know, the raccoons could be going mental out there, and the butterflies might be flying in concentric circles and bumping into each other. But all we hear are the dogs.

Carolyn gets Julia out of the way for a while by telling her that Barnabas wants to see her. Then she sneaks upstairs to Julia’s room to search for the notebook.

Carolyn finds the lockbox where the notebook used to be, but it’s empty. The notebook isn’t there, and I’m not actually clear on where it is myself. Julia comes back, finds Carolyn in her room — and guesses correctly that she was looking for the notebook. Now Julia knows that Barnabas plans to kill her.

Technically, I guess that counts as another episode where they didn’t actually advance the plot in any meaningful way from where they started. Gentlemen on the writing staff: How long are you going to stand there?

Barnabas tells Carolyn where to find Julia’s notes: “She keeps them in a little notebook in a safety box on top of the armoire in her room.” In Monday’s episode, they refer to it as a “strongbox”, and I think here Jonathan Frid is mixing up that word with the phrase “safe deposit box”.

In Wednesday’s episode, Joe wrapped up his visit to Collinwood by saying, “I’m supposed to pick up Maggie in a couple minutes.” This episode takes place the next evening, and Maggie tells Carolyn, “I’ve been away visiting some friends up in New Hampshire, and then when I got back this afternoon, I heard the news about Burke.” So who was Joe really picking up last night?

Maggie appears to be having some trouble with her coat in her scene with Carolyn. It looks like one of the buttons in the middle is missing, so you can see a slight bulge where the fabric is buckling. At the beginning and the end of the scene, Maggie rests her hand on that spot, and she may be trying to hide the wardrobe malfunction.

Julia’s bedroom was arranged differently when Dr. Woodard searched it in episode 339; they changed it because Nancy Barrett is too short to reach the top of the armoire. When Woodard searched the room, the armoire was up against the same wall that had the door and a set of three pictures, and the head of the bed was on the opposite wall. Today, Carolyn needs to stand on the bed to look for the box on top of the armoire, so now the armoire and the head of the bed are on the same wall.

There was an ugly film splice in Tuesday’s episode, marking the spot where they made a clumsy edit in the videotape. There’s a similar splice today, towards the beginning of Julia’s scene with Barnabas. Video editing was very crude in the late 60s, and usually they just kept the cameras running, even when something went wrong. They may be trying to experiment this week with some editing, and they’re not particularly successful at it.