“That’s the first time you’ve ever called me by that name.”

Not very much previously, on Dark Shadows: Two days ago, David gave Carolyn the antique toy soldier, which he said would protect her. Then she was visited by the spirit of Sarah Collins, and she realized that the wild stories David’s been telling might actually be true. There, that’s your background on Carolyn’s character arc for the week — steadily building an awareness that David’s “fantasies” might be real.

So it’s a bit disappointing when David walks into the drawing room at the top of today’s episode, and hands Carolyn the toy soldier again.

David:  I came to bring you this.

David:  Yes. You should have it with you all the time.

Yeah, good question. I have several “why” questions of my own, starting with: Why doesn’t David climb up on a chair and smack her upside the head? 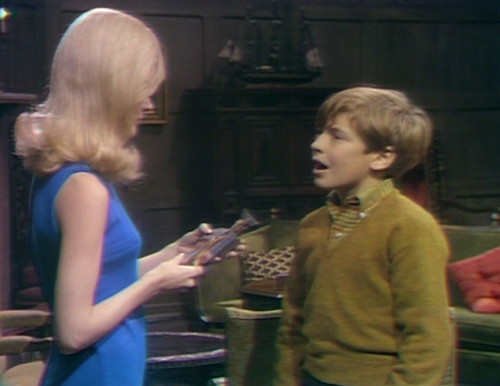 Even on a messy daytime soap like this, the only way to reconcile this scene with what happened in Wednesday’s episode is that maybe Carolyn had some massive head trauma while we weren’t looking. She spent the entire episode talking to David and Liz about this toy soldier.

And then it gets worse. For some reason, the hideously-aged Barnabas appears at the window, glaring into the room. David cries out, but by the time Carolyn turns around, Barnabas is gone. When Liz rushes in, David tells them that he saw a scary old man outside, and Liz and Carolyn share a pitying look behind David’s back.

So Carolyn’s just gone full-on goldfish; as far as she’s concerned, the last two days didn’t happen. This is what happens when you let Ron Sproat write episodes again.

I mean, Sproat’s not a bad writer. I don’t know if you can say that he’s the guy who invented Barnabas — executive producer Dan Curtis deserves at least half the credit for that — but Sproat is the guy who defined who Barnabas is, how he talks and how he thinks. His Barnabas/Julia scene in today’s episode is pure 24-karat dynamite.

But I think Sproat is so excited about the monsters that he’s lost interest in writing for the humans. Last week, Joe Caldwell wrote an amazing character-building episode with genuinely touching moments between David and Carolyn, because Caldwell cares about the human characters. Sproat mostly thinks of them as recap monkeys.

The thing that’s really frustrating is that you can write recap scenes in a way that still preserves the characters’ IQ. If it’s really crucial to remind the audience about the toy soldier, then you have Carolyn say, “Yes, I know, David. You want me to keep this toy soldier, because Sarah said it would protect me.” Is that really a difficult guideline to get your head around?

When David leaves the room, Carolyn tells Liz about her encounter with Sarah, and she says that she’s starting to believe David. This is even more baffling. Apparently now we can’t even keep track of what Carolyn knows all the way through a scene.

So let’s go over to the Old House and check in with the ghouls, because the humans are getting on my last nerve.

And it looks like Barnabas feels pretty much the same way. Julia gave him an extra-heavy dose of anti-vampire juice the other day, and it turned him into the withered old husk that he would be if he’d actually been alive this whole time.

He comes back to the house after taking a walk, and Julia’s waiting for him.

Julia:  Where have you been?

Barnabas:  I was out for a walk. I wanted to be alone, to contemplate the success of your noble experiments, Doctor, and what I must do about it.

Barnabas:  No, not yet. Of course not, for my appearance would have altered.

Apparently, he believes that if he bites someone, then he’ll “revert” and get his youthful good looks back. I’m not sure why he believes this, but he’s the vampire, so whatever. 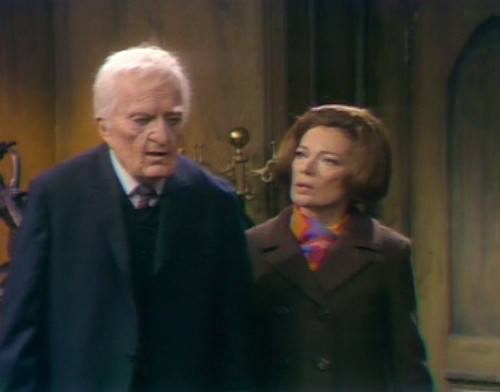 Julia:  And who is it going to be?

Barnabas:  I don’t know yet. I must find her. There must be someone out there… someone there in the darkness.

Julia’s been lobbying for Barnabas to bite Vicki, for kind of complicated interpersonal reasons. Barnabas insists that he doesn’t want Vicki that way; she has to come to him willingly, as the new version of his dead girlfriend, Josette.

But Julia has an idea for an alternative.

Julia:  Don’t you think it’s possible that someone might come to you… willingly?

Julia:  Yes. There might be someone who could accept you for what you are, and… submit to your needs?

Barnabas:  And who is this person? 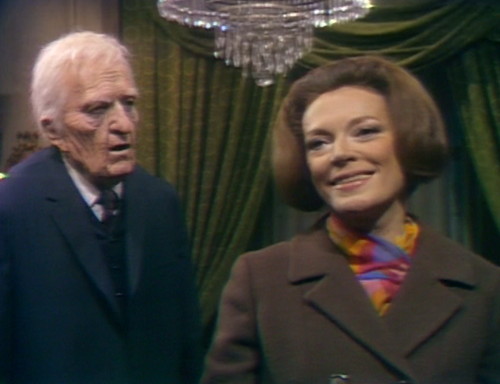 And she means it, too. Look at that smile.

Barnabas:  Would you… willingly?

Barnabas:  Even knowing what would happen to you?

It’s actually to his credit that he’s shocked. That’s how messed up this is; we’ve shocked the psychopath vampire.

Barnabas:  You take pride in being a strong-willed woman. You would no longer have a will of your own.

Barnabas:  And you would make that sacrifice?

Julia:  That’s the first time you’ve ever called me by that name.

And I think that might be the moment that really sells this insane situation. I hadn’t noticed that he’d never called her Julia before. Look how happy she is.

Now, obviously, this is not an awesome moment, re: strong, independent female role models who should be teaching young girls of the late 1960s that they shouldn’t give up their careers, not to mention their immortal souls, for a guy’s short-term hunger for body fluids.

But now that I think of it, Julia recently murdered an old friend in cold blood, to cover up for Barnabas’ crimes. I guess she lost the Woman of the Year nomination a while ago.

Still, it’s definitely surprising. We didn’t see this one coming. 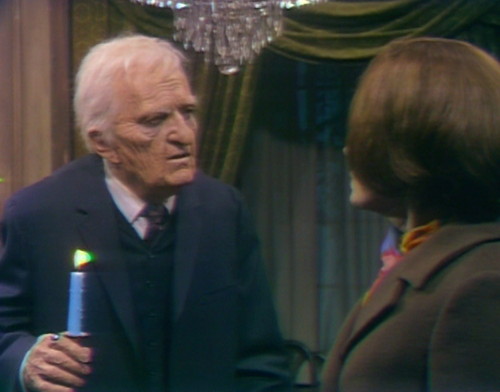 He says no, by the way. He may need her services as a doctor in the future, and apparently drinking her blood will invalidate her medical license somehow. I forget if there’s a chapter on that excuse in He’s Just Not That Into You.

But let’s break this down a little bit more. There’s an obvious question here — why does it have to be a woman? The short answer to that question is, “Because a vampire bite is a metaphor for sex.” The long answer is exactly the same, but you add the word “Duh.”

Although “sex” isn’t really the right word. It’s non-consensual. He’s planning to go out and rape somebody.

Vampires — especially sexy vampires, as seen in approximately half of American pop culture output in the last ten years — are not-very-subtle rape fantasy objects. And it’s a particularly nasty version of the rape fantasy, because after it’s over, the victim becomes the rapist’s slave. The initial attack is terrifying, but once you get going, it turns into love.

Now, if you took the fantasy-metaphor part out of that scenario, it would be completely unacceptable. A sexy bad boy with dark eye makeup walks around town, assaulting pretty girls and then making them fall in love with him. And you even see the penetration; they do big exciting close-ups on the “fangs”.

I don’t have a way to process this, really. We enjoy stories that use a fantasy metaphor to turn rape into romance. Deal with that.

And we can’t say that Ron Sproat didn’t consider this interpretation, because it’s the only way to understand what they’re talking about.

Barnabas doesn’t want to bite Vicki, because it would violate the innocent virgin. He wants to marry her, and assaulting her before she agrees to the wedding would spoil everything. When Julia offers herself, Barnabas is shocked, because she’s an intelligent woman who you’d think would have more self-respect than to volunteer for the position of helpless rape-victim slave.

So keep all that in mind as we move on to today’s big cliffhanger. After another frustrating conversation with David, Carolyn decides to go to the Old House, and find out what’s really going on in the basement.

Naturally, the front door is unlocked, because this is a soap opera, and locks are storyline speed bumps.

The basement door is unlocked, too. They made a big deal about the locked basement a few weeks ago, but never mind. Let’s get her downstairs.

So this turns out to be a crazy episode. The beginning was baffling and dull, but now they’re flipping over tables, and there’s a real threat to a character that we love. 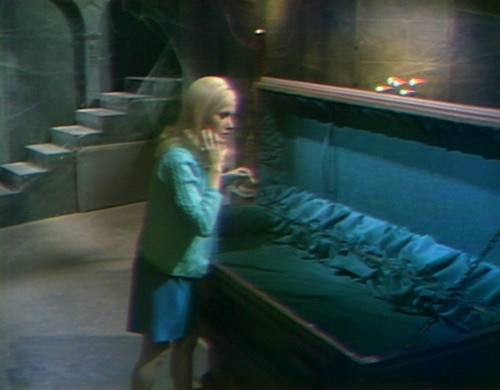 And they’re following through on it, too. This isn’t one of those bait-and-switch episodes where they’ve hidden the coffin, or blocked up the secret room in the mausoleum. She goes to the basement. She finds the coffin. 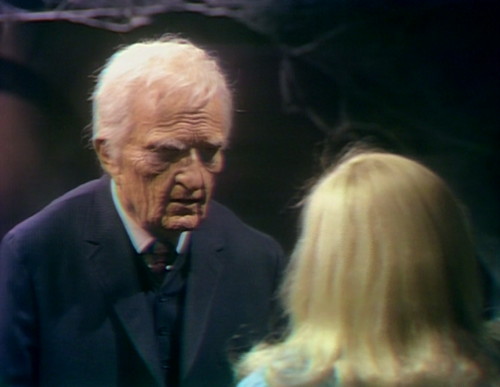 And then there’s this.

Carolyn:  You can’t be Barnabas!

Barnabas:  But I am.

Carolyn:  But… what’s happened to your face? You’re so old!

Barnabas:  It won’t be old much longer! 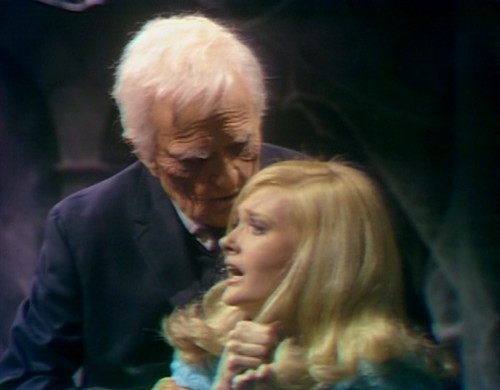 Barnabas holds his young great-great-grand-niece, and gently brushes her hair away from her neck.

“I wouldn’t do anything to hurt… my own flesh and blood.”

Which is phenomenal. A strong punchline, and a shocking Friday cliffhanger.

Oh, Sproat. Every time I think I’m done with you, you pull something like this. I wish I knew how to quit you.

When Liz sits down during her conversation with Carolyn, the boom mic can be seen at the top of the frame.

Carolyn is sitting in the drawing room, staring at the toy soldier. The camera cuts to David, standing at the foot of the foyer stairs, clearly waiting for his cue. As he walks across the foyer, there’s a noise that sounds like someone’s operating a pump.

David asks Carolyn if she thinks he’s crazy, and she says that he doesn’t. David says “Elizabeth does.” Usually, he refers to Liz as “Aunt Elizabeth.”