“Terrible things happen, and no one seems to do anything about them.”

At the top of today’s episode, the ghost of Sarah Collins appears in David’s bedroom, and tells him that Dr. Woodard was murdered.

This is all standard operating procedure for Sarah, who is powered entirely by narrative convenience, and always gives David exactly enough information to set up the next scene. Usually, I would complain about that, except that the next scene is unbelievably sad and beautiful, and it makes me want to cry.

I’ve been writing all week about Joe Caldwell, a New York playwright who did several brief tours of duty as a writer on Dark Shadows. He was on the writing team for two months early in the summer of 1967, and now he’s back for two weeks, filling in before Sam Hall joins the show in November.

Caldwell is one of the best writers on the show, because he takes the characters seriously. Even with all of the insane supernatural plot contrivances, Caldwell tries to find the truth in the characters’ emotional lives.

Now, David has been put through the wringer lately. His ghost friend has given him glimpses of a terrible, dark world lurking under the surface — she showed him the secret room in the mausoleum, and he knows that Barnabas sleeps in a coffin in the Old House basement.

So he’s spent several weeks just running around and yelling at everyone, trying to get them to recognize the horror that’s right in front of them. But Barnabas keeps pulling off last-minute escapes, and now David has to talk to a psychiatrist, who interprets everything he’s saying as a reaction to the death of his mother.

Oh, and PS: David’s mother died in a fire eight months ago, right in front of him, screaming for him to join her in the flames. It’s been a weird year.

So here’s David sitting in his room, listlessly poking at his Major Matt Mason Space Crawler toy, which has failed to grip his attention. His aunt Elizabeth comes in for a talk.

Liz:  Mrs. Johnson told me you didn’t touch your breakfast.

Liz:  Well, maybe you were still too sleepy to be hungry. Would you like something now? 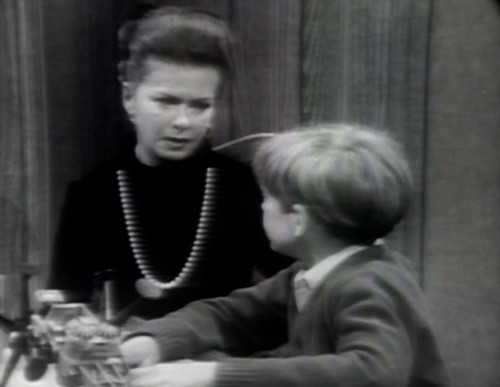 Liz:  I’m sorry I didn’t come in to see you earlier, but I had to go into Collinsport.

Liz:  We all went in. It wasn’t a very happy trip.

David:  I think I know what you’re going to tell me.

Liz:  I don’t think you do. It’s something very sad, and I don’t want you to be too upset by it. 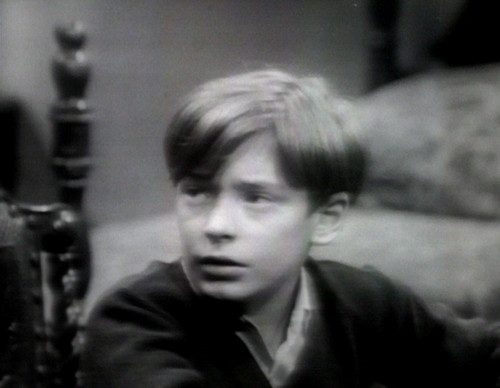 And this is how he’s looking at her. She’s right; I’d hate to imagine how he would look if he was even more upset.

He takes charge of the situation.

Surprised, Liz gets up, and turns away from David.

Liz:  You… you must have heard us talking.

He’s given up on trying to tell people about Sarah. It doesn’t do any good, and it just makes them sad.

He walks over to the window, and looks outside.

Liz:  We all went to the funeral this morning. Practically everyone in town was there. Lots of people were as fond of him as we were.

Liz:  Why didn’t you tell someone you knew?

David:  What difference does it make?

And, wow, seriously, that makes me want to cry. They’ve made three hundred and forty-four episodes of Dark Shadows so far, and some of them have been great, but this is the one that just tears my heart out.

I might take this scene a little harder than other people, because I was the youngest kid in my family, and there were definitely a lot of times in my childhood when I felt like nobody was listening to me, or took me seriously. There wasn’t anything special or tragic about it, just an ordinary kid feeling alone and unappreciated sometimes.

But I recognize this response — just shutting down, because nobody’s listening, and it doesn’t make a difference anyway. I’ve done this. I’ve had this conversation. 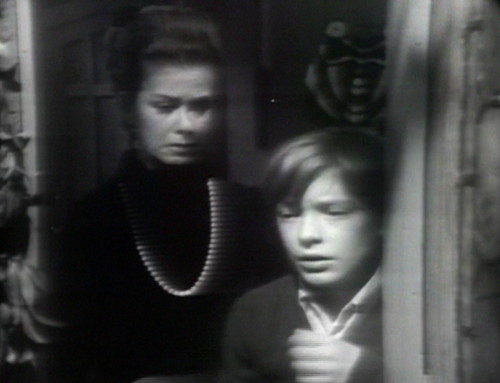 Liz:  I’m sure it must have upset you a great deal.

Liz:  David, I don’t understand this attitude of yours.

David:  He’s dead. Terrible things happen, and no one seems to do anything about them. 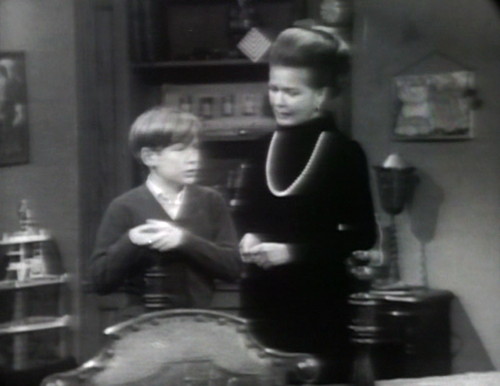 She keeps saying that it’s okay for him to be upset, but when he starts to act upset, she doesn’t know what to do.

David:  It was terrible. It shouldn’t have happened.

Liz:  David, it was just like going to sleep, very quietly.

David:  It shouldn’t have happened! It was terrible!

Liz:  David, why do you keep saying that?

And he shuts down again. He sits on the bed.

Liz:  Can’t you tell me what you mean by it?

David:  What difference does it make? Nobody believes anything I tell them any more anyway. It doesn’t matter, nothing matters. 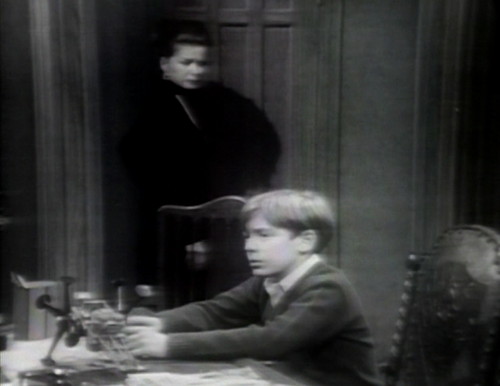 Liz asks him if he wants to come downstairs for lunch. He says he’ll be all right up here. She walks to the door.

David:  I liked Doctor Woodard… because he believed me. And maybe that’s why he’s dead.

Liz looks at him, for a long moment. Then she turns and walks out.

And that’s the scene. Now, most of the time, if you showed somebody an episode of Dark Shadows, you’d have to make a series of excuses and caveats — it’s the late 60s, they had a different expectation about pacing, they recorded it live-to-tape, one actor is drunk and the other one’s a werewolf, whatever.

But I’d put this scene up against anything else on television — no excuses, no apologies. It’s a great, heartbreaking, character-driven scene about two people who truly love each other, and are utterly unable to help each other.

This happens to be one of the eleven color episodes in the series where they lost the videotape master, so all we have is this black and white kinescope copy. That’s usually irritating, and I’m glad we only have a few more kinescopes coming up.

But for this episode, it’s actually kind of a benefit. It’s just a coincidence that they lost the color master, but it works. This is a funeral. It should be bleak.

Carolyn comes upstairs with a sandwich for David, and they go in a completely unexpected direction.

David:  What do you mean?

Carolyn:  Don’t forget, I grew up in this house too. I was alone most of the time too. I didn’t have any friends, either… except the ones I imagined.

This is precious. We should hold on to this. It’s a little moment of thoughtful character-building, revealing a part of Carolyn’s backstory that we hadn’t thought of before. Roger had a similar moment a couple weeks ago, when he talked about growing up in Collinwood, with the portraits of all his dead ancestors staring down at him. 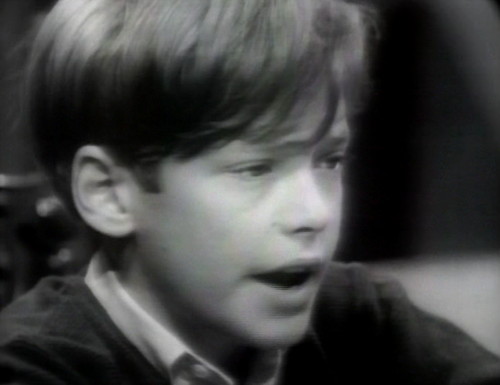 David:  You’re talking about Sarah, aren’t you? You think I just imagined her, don’t you?

Carolyn:  Do you think you imagined her?

Carolyn:  Then neither do I.

David:  Do you mean that?

Carolyn:  I think so.

David:  You don’t have to pretend. I don’t care.

So Carolyn tells him a story.

Carolyn:  When I was nine, my best and closest friend was a little boy named Randy. He had dark hair, and brown eyes, and he always wore a red sweater, even in the summertime. We played practically every day. Sometimes down on the beach… we would climb trees, or look for sea glass. 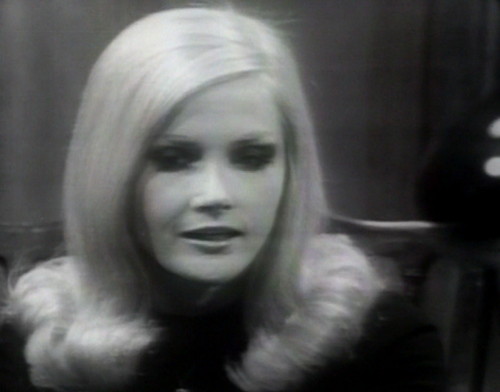 Carolyn:  The last time I saw him was on my tenth birthday. He brought me a piece of sea glass that looked like clear, green water. I never saw him after that.

Carolyn:  Even now, I’m not sure whether he really existed, or whether I imagined him. 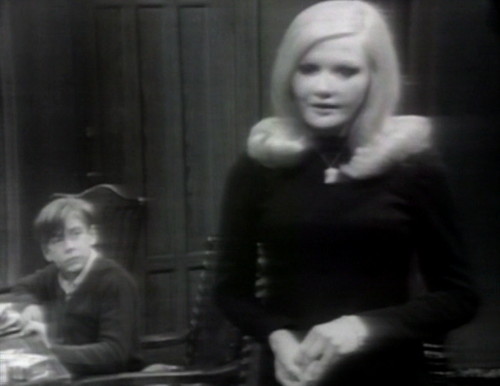 Carolyn:  Maybe he was. I’ve never known, and I’m sure I never will. But whatever he was… he was real. A real boy, or a real figment of my imagination… or a ghost. Even now, I find sometimes that I miss him. People can laugh at me, and not believe me. But I don’t care. 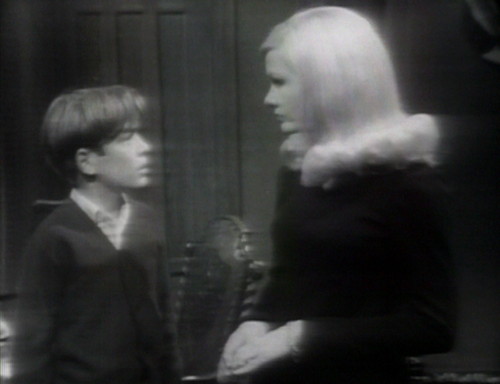 David stands up, and he looks at her, as if they’re really seeing each other for the first time in a long while. 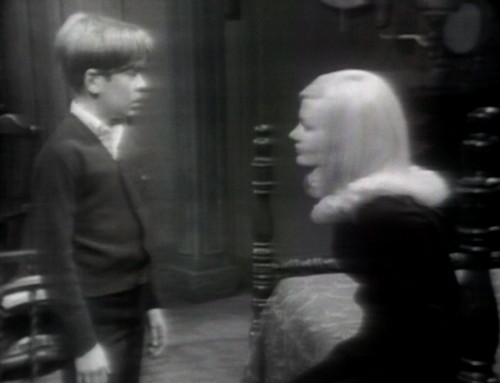 She sits down on the bed.

Carolyn:  Do you want to know something, David?

Carolyn:  I do believe you.

That’s not the end of the episode — there’s a bit with Carolyn hearing “London Bridge”, and then David talks to Burke, who’s going away on a business trip to South America. David says goodbye, like it’s the last time, and we can consider what happens next appropriately foreshadowed.

But I want to leave it here, with David and Carolyn. She believes him. That’s not going to end well for her, or for Burke, or for any of the people living in this damaged wreck of a house. But she believes him.

Somebody in the studio is coughing through practically all of the Liz/David scene. Every time they pause for a second, you can hear him cough. Dude needs a lozenge.

At the end of the scene when David says goodbye to Burke, the camera pointing at Liz goes out of focus.

I had originally written that David was poking at a model airplane, because I was young and I didn’t know any better, but regular commenter and friend of the blog John E Comelately has identified it as the Major Matt Mason Space Crawler toy, as seen below. This takes us another step towards the ultimate goal of deciphering David’s room. See the post “The Room” for more on this subject.