“I’m sure that you can recognize the difference between a cellar with a coffin, and a cellar without a coffin.”

In 1948, James Thurber wrote a five-part series of articles for The New Yorker called “Soapland”, an in-depth look at the world of radio soap operas. One of the many strange things that he learned was that some listeners apparently had a hard time understanding that the shows were fictional. When a popular heroine on Just Plain Bill was going to have her first child, listeners sent hundreds of baby gifts to their local network stations, and when the child died, the stations received stacks of sympathy cards.

That stereotype of the half-deranged soap audience lasted for a long time, and every Dark Shadows-era interview with Jonathan Frid would include at least one paragraph on the weird mail Frid received from female fans, begging for a bite.

But from what I’ve seen, soap opera fans are exactly the opposite of that stereotype. There are currently two weekly magazines on newsstands that are exclusively devoted to documenting the behind-the-scenes mechanics of daytime television production, where producers and head writers are expected to explain and justify every single storyline and casting decision. Following a daily soap opera is like getting a graduate degree in Open-Ended Serialized Narrative in Theory and Practice.

This means that we’re constantly analyzing the soaps we enjoy, measuring the current state of the show against what we’d like it to be. We’re an audience of active backseat drivers. When a favorite character dies, we don’t send sympathy cards — we write letters and emails and furious tweets, actively campaigning to bring the dead back to life.

It’s not just that we don’t believe the characters are real. We barely believe that the show is real.

Of the many outcries that are cried out each week in the soap press, the most heartfelt are always about characters that we’re supposed to like and we just don’t. The indelicate phrase used approximately once per letter column is that a new character or unpopular couple is being “shoved down our throats”.

We’re fiercely loyal to the characters and actors that we like, and equally tough on newcomers and recasts. And if the internet had existed in October 1967, then #nuBurkeFail would be trending this week. 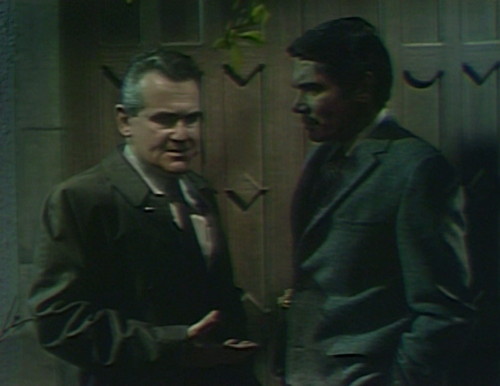 I mean, look at these clowns. Yesterday, Dr. Woodard and nuBurke insisted on searching the Old House basement, to find the coffin that David claimed was hidden there. It didn’t go that well.

Now they’re coming back to Collinwood to report total mission failure. And are they taking this opportunity to reflect on the way they’ve conducted themselves?

Burke:  You have to admit that Barnabas acted awfully strangely about letting us down there.

But as always, in our time of greatest need, here comes Roger to the rescue. He advances on the abashed pair, eyebrows at the ready.

He asks for a report, and Woodard confesses that they didn’t find a coffin in the Old House basement.

Roger:  Well, I trust you gentlemen at least enjoyed your walk. It is a nice evening for that.

Burke:  Is that all you have to say?

Roger:  Well, what do you want me to say? You’re very quick to point out how odd and eccentric my cousin is. I think I would have reacted exactly as he did. The idea of two hysterical grown men tramping through a cellar looking for an empty coffin is macabre. 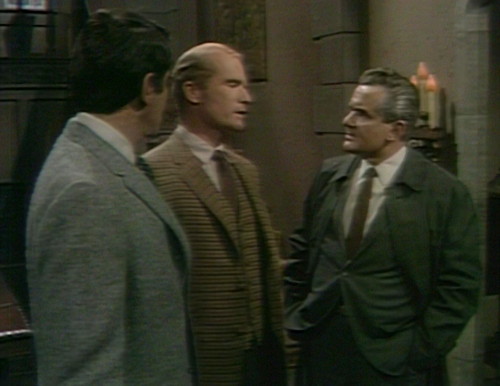 I love Roger; he’s phenomenal in moments like this.

Burke:  Roger, I don’t think that asking for Barnabas’ cooperation is an imposition. After all, he is the boy’s cousin.

Roger:  Yes, and I’m the boy’s father, and I tell you, I wouldn’t cooperate. David is a very dramatic little boy.

Woodard:  Well, Roger, I am a physician, and I think I know the difference between a frightened person and a mentally disturbed person.

Roger:  Of course you do, Doctor, and I’m sure that you can recognize the difference between a cellar with a coffin, and a cellar without a coffin. 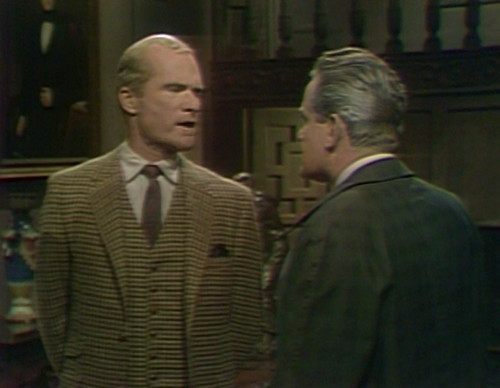 I’m going to keep quoting, because he just gets more fantastic.

Woodard:  I don’t think you realize how serious David’s condition may be.

Roger:  David has no condition! He’s like every other young boy. And because he’s a Collins, everyone is anxious to put a label on him, to find strangeness where none exists.

Woodard:  Look, Collins or not, that is a very frightened little boy.

Roger:  And every other little boy in the world is frightened. It’s part of growing up. 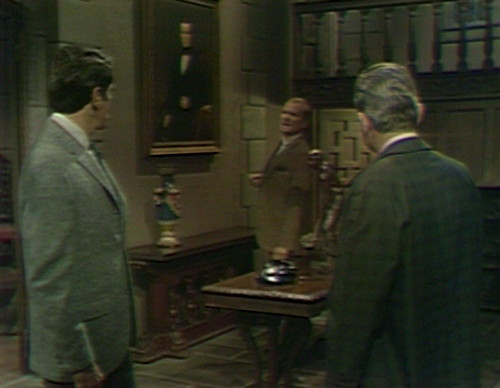 He indicates a portrait.

Roger:  I was a child in this house. I was terrified of the darkness in the corners, and frightened to walk along the corridors by myself. I used to think that all the people in these Collins portraits… all those dead people… stared at me wherever I went. Looked at me with piercing eyes — hated me! Well, I outgrew it and so will David. 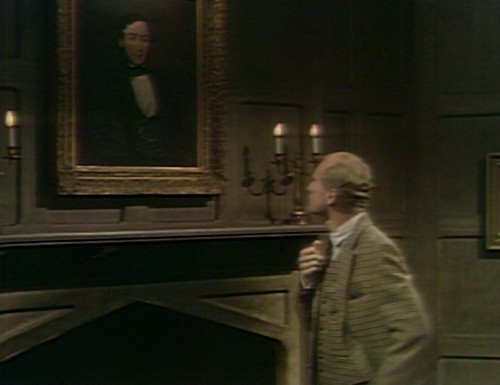 Burke and Woodard go upstairs to talk to David, and Roger walks into the drawing room, lost in thought. Then he looks up, and catches the eye of one of his ancestors. He even takes a little step towards it, as if he’s challenging the portrait to start something. Then he turns away, his brow furrowed.

That’s a lovely character moment, and it opens up an interesting backstory for Roger as a young boy. We know from later storylines that the late 1960s wasn’t the only period of paranormal activity at Collinwood. What kind of childhood memories are surfacing for Roger in the current crisis? And what do you suppose happened to Elizabeth and Roger’s parents?

But at least now Roger can be happy that the Scooby gang’s investigation is over, so imagine how he feels when they all come stomping downstairs again, heading out to find the secret room in the Collins mausoleum.

Burke still has that same condescending, maddening tone which makes him so disliked on all sides.

Roger:  Barnabas is a member of this family, and as such is entitled to a certain amount of respect. I think it’s shocking that a cousin of mine is insulted, and defamed, and accused of… I don’t even know what to call it!

Burke:  We’re not accusing Barnabas of anything. We just want to give David the benefit of the doubt.

Roger:  You seriously think that there’s some deep, dark secret in that mausoleum?

Burke:  No. We just want to take a look.

Roger wraps things up with another wry line.

Roger:  Well, if you don’t think you’re making fools of yourselves, then go on out and look for your terrible shadows in the night.

See? He’s a dream. We’re blessed to have him. 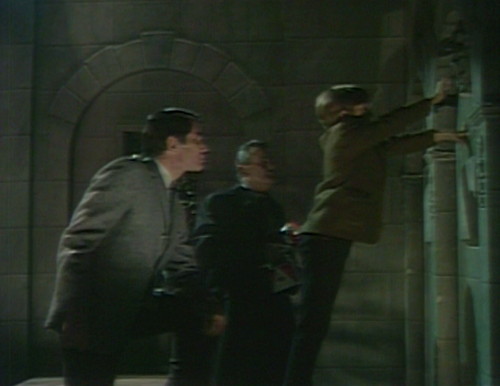 Then we have to follow the guys out to the mausoleum, where somebody has sealed up the secret room, and disabled the latch that opens the panel. David pulls on the ring, and nothing happens. This is the second episode in a row that ends with Burke and Woodard not learning anything.

So I just don’t know what I’m going to do with these two. There’s going to have to be some changes made around here very soon, and this time I mean it.

Tomorrow: The Shadow He Casts.

Burke talks to Woodard about Barnabas: “I don’t like him. Nothing about him. He’s the kind of guy that makes you want to prove himself wrong.”

When Roger walks over to the portrait in the foyer, a boom mic can be seen in the shot very briefly, near the top left side of the screen.

The “Soapland” articles that I mentioned at the top today are collected in James Thurber’s The Beast in Me and Other Animals. It’s a fantastic critical history of the earliest soap operas, and it’s both informative and very funny. Anybody who’s interested in soap operas as a genre should read it; I couldn’t recommend it more highly.

Tomorrow: The Shadow He Casts. 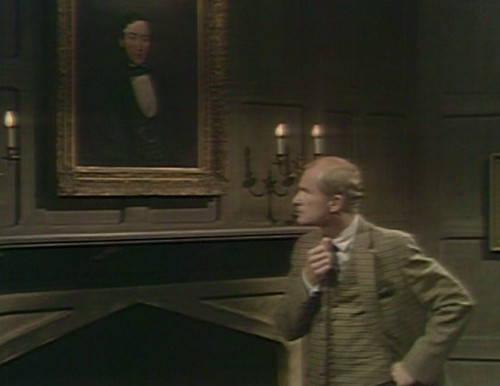