“The point is that I am in danger!”

It’s another relaxing evening at the Old House, and Julia tells Barnabas that she has another treatment ready for him. She’s trying to discover a cure for his vampirism, which would be hard enough even if she had a fully compliant patient. But Barnabas is feeling cranky, and when he’s cranky, he tends to get a little strangly.

Here’s his problem: young David is convinced that there’s something spooky hidden in the Old House, and a couple episodes ago, Julia caught the boy tugging on the locked basement door. She didn’t tell Barnabas about the encounter, because she knew he would freak out about it.

Yesterday, Roger mentioned the incident to Barnabas, and guess what? He’s freaking out about it.

So, once again, the experiment storyline gets shafted in favor of another round of Threat Bingo. Using soap opera medicine to restore the damned to human life is the most exciting thing they could be doing right now, a completely new idea that opens up a landscape of story possibilities.

But for the last six weeks, the experiments have been puttering along in the background, as Barnabas plays Whac-A-Mole with an endless series of perceived threats.

They’ll get back to the experiment storyline eventually, and it will have a huge impact on the direction of Barnabas’ story. But not today. 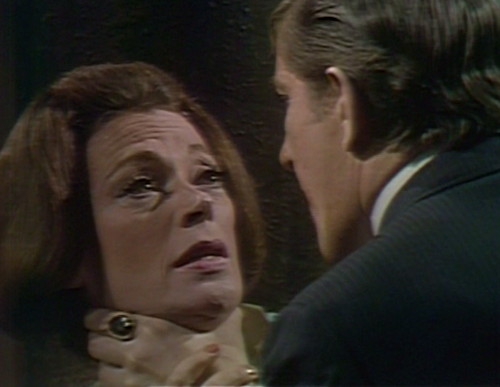 Instead, Barnabas and Julia hold a full-contact panel discussion on the meaning of the word “danger”.

Julia:  You’ve had it. I’ve put myself in terrible danger for you, time and time again!

Barnabas:  What if I were the one in danger? Would you warn me? Would you tell me?

Okay, that repetition, right there? That’s your signal that things are about to drift slightly off book.

Julia:  But you weren’t in any danger!

Barnabas:  That, at this moment, is not the point!

Julia:  Then what is the point?

Barnabas:  The point is… that I am in danger!

There you go; that’s why Julia showed up today. Angry Fridspeak, delivered at full volume from two centimeters away. 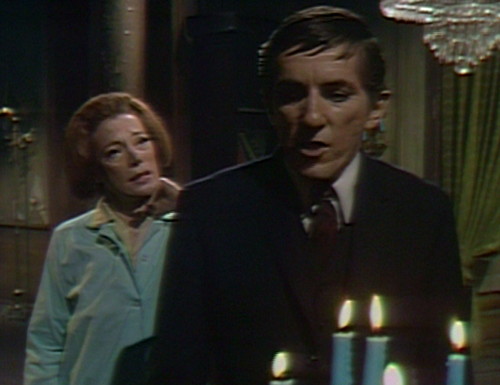 And it just keeps going. They say “danger” two more times, and then they start in on the word “safe”.

Barnabas:  Safe? Safe! When nothing stands in the way of complete exposure but a locked door, and someone is already tugging at that lock… and I don’t know about it! How can you say that I’m safe?

So the truly crazy thing is that we’re currently watching an incident of domestic violence between a vampire and his secret blood specialist sort-of-girlfriend on daytime television, and I’m complaining that this kind of scene is getting tired.

But that’s what happens when you’re in the Spectacle industry. Dark Shadows is now in the full-time business of creating surprises. We’ve recently seen a marionette bat attacking a child; you don’t back down from that.

Julia goes back to Collinwood, and shares a moody cup of tea in the drawing room with Roger, who’s fuming about David’s paranoid hallucinations. She asks if they’ve thought about sending David away for a while to a special school, and Roger says that he’s considering it.

And then they go and do something quite strange and avant-garde with the sound effects, so excuse me if things get a little film-crit for a second.

In the foyer, David hears Roger and Julia talking about him. He overhears Roger’s plan to send him away, and he heads up the stairs to think it over. 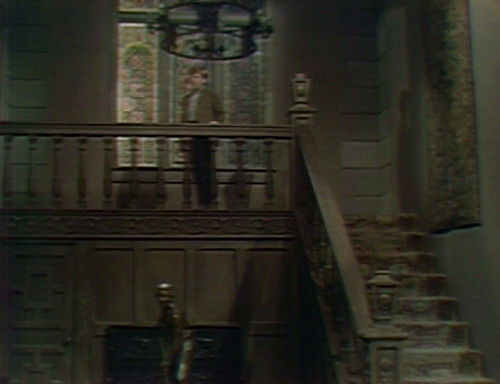 He’s still eavesdropping on the conversation as he reaches the landing — and then he pauses, and does a little monologue in thinks. 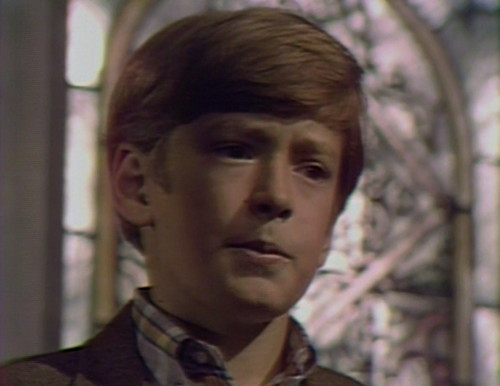 David (thinks):  They’re going to send me away! They don’t believe me! No. I won’t let them do it. I’ll prove to them that I’m right!

Then he hears the recorder playing “London Bridge”, and Sarah’s ghostly voice rings in his ears: “Stay away from the Old House! Danger! Don’t go near the basement… ever!”

Now, I’ve been noticing for a while that they’re not very consistent about the recorder music. Sometimes we see Sarah actually playing the tune, and sometimes it’s disembodied music that alerts the characters that her spirit is nearby. But they also use the same music cue as part of the incidental music, and the characters can’t hear it. And in some cases, it’s actually impossible to tell whether they hear the music or not.

In this particular moment, we can hear Sarah’s voice at the same time as the recorder music, so presumably she can’t be playing it. The implication is that Sarah has a house band, which provides a backing track for her. 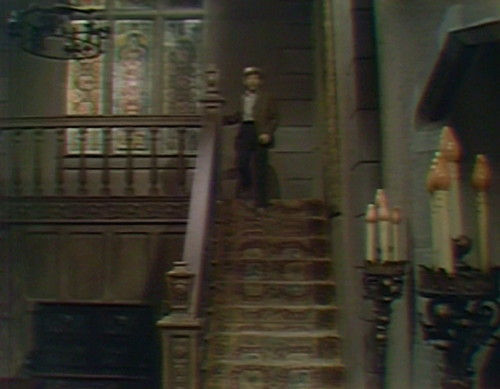 David calls out “Sarah!”, which the adults in the drawing room apparently can’t hear, even though he could hear their conversation perfectly well. But we can’t hear them talking anymore; there’s just the “London Bridge” song playing as David comes downstairs and does some more thinks.

David (thinks):  But I’ve got to go! You said this would protect me. I don’t know how. It’s only an old wooden soldier. But I’ve got to get into the basement, even if I have to steal my aunt’s keys! Sarah! Will this really protect me? Sarah!

Yes, that’s right — he’s calling out to Sarah from within his internal monologue. We’ve now broken all of the possible rules of how sound works within this narrative world.

As far as the audio is concerned, this scene is a boundary-defying mash-up of overheard conversation, internal monologue, incidental music and spectral reverb. It’s impossible to predict where the sounds come from, and who can hear them.

Now, it’s possible that this isn’t as unique as it appears; maybe General Hospital and The Secret Storm were also doing experimental musique concrète in 1967. But I doubt it. 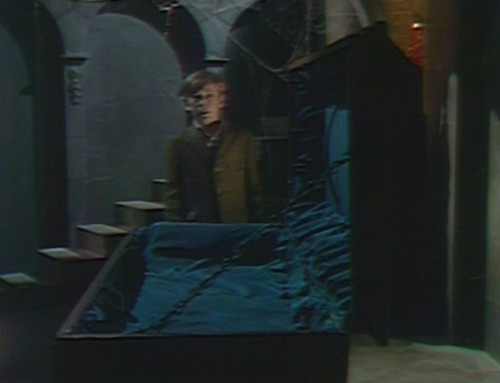 Anyway, that’s pretty much the high point of this episode’s excitement, as far as I’m concerned. Nothing else really happens.

Oh, except that David gets into the Old House basement and finds the empty coffin, and then he’s caught by Barnabas. I guess that’s pretty interesting, too. Let’s meet back here tomorrow, and we’ll get into it.

During the strangling, Julia chews up one of her lines:

Julia also has a little trouble when she’s talking to Vicki about going to the Old House.

Julia:  If he’s there, I’ll bring him back. There’s no point in both of us going — traipsing over.

And this isn’t a blooper; just an odd moment for viewers who have seen the later episodes — David goes to the study to steal Elizabeth’s keys, but he gets there through the door in the foyer that’s under the stairs. Later on, they’ll establish that that door leads to the kitchen; the study is on the other side of the foyer.

When Vicki describes David’s toy soldier, Julia says that she remembers seeing a picture in one of the Collins family histories of a little boy with a toy soldier, and a little girl holding a doll. The implication is that this was a picture of Barnabas and Sarah as children. As we’ll see in about six weeks, Barnabas was at least ten years older than Sarah; they weren’t small children at the same time. But at this point in the show, they haven’t decided to do that yet, and all of the clues we’ve heard about Barnabas and Sarah’s relationship are perfectly consistent with them being close in age.