“I’ll have a man behind every bush and tree, if you give the word.”

Well, the Collinsport Star had to break out the 84-point type again. Another Girl Attacked! You have to admit, it makes for a compelling headline.

Underneath that, the sub-head says “Police Baffled”, about which quelle surprise. I’ve seen the Collinsport police. “Baffled” is actually a pretty good day for them. 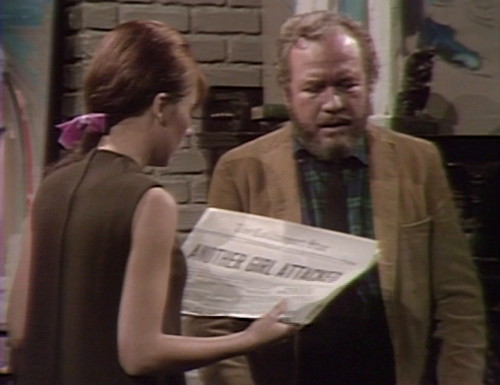 To be fair, the eyewitness quality is not at an all-time high.

Maggie:  Did the girl get a good look at him?

Sam:  Yes, but apparently he was just a dark figure. He just came from nowhere.

So once again, I have to ask the citizens of Collinsport: please, please try to be more observant. It really is for your own good. The police can’t go around looking for dark figures that come from nowhere. It’s just not practical. 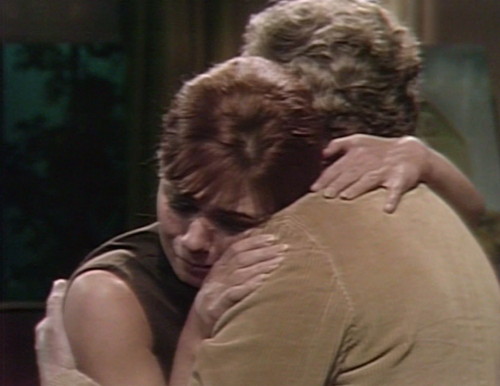 So, obviously Maggie’s upset. A few months ago, she was the Local Girl who Mysteriously Disappeared, and a fresh attack means that the perpetrator — known colloquially as “this maniac” or “this madman” — is still running around town, causing consternation and alarm.

Plus, she’s only glanced at the front page so far. This is Collinsport, the original Hellmouth; who knows what kind of nonsense is on page two. 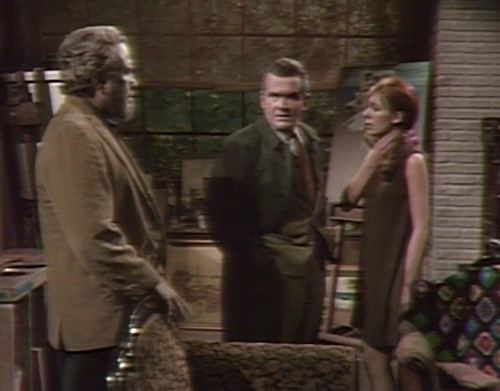 As if that’s not bad enough, here come the scariest five words in Collinsport: Dr. Woodard has a plan.

Woodard comes over to workshop his awesome new idea. Sam makes several rookie mistakes in this conversation, which we can all learn from.

Woodard:  Before I tell you, I want to warn you — it’s risky.

Woodard:  I think we ought to set a trap for this maniac.

Woodard:  I think we ought to get the people in town to believe that Maggie’s memory is beginning to return. Now, if he hears that, he’s gotta come out into the open, and we’ll be waiting for him.

Obviously, n00b mistake number one is listening to Woodard in the first place; mistake number two is asking clarifying questions; number three is not grabbing a broom and shooing him out of the house before he hurts somebody. 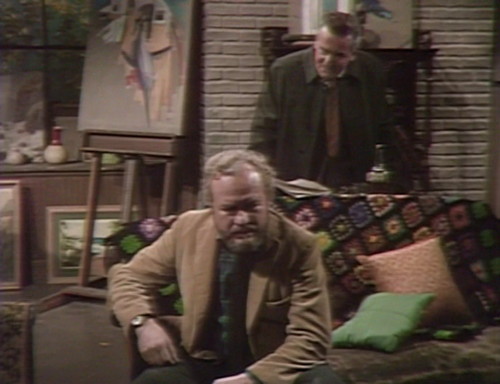 This is a funny thing that happens on soap operas all the time — there’s a fuzzy boundary line separating the duties of a doctor, a police officer, a lawyer, a psychiatrist, a newspaper publisher or any other authority figure.

This isn’t the first time that Dr. Woodard has overstepped the traditional responsibilities of a doctor — he’s the one who said they should fake Maggie’s death so that maniac would leave her alone. We’ve also seen a prominent local businessman helping the sheriff to dig up a crime scene.

So the authority figures tend to run together, and they always back each other up. Really, pretty much any dude with a deep voice who tucks in his shirt can basically declare martial law whenever he feels like it.

I could come up with some kind of feminist lit-crit theory about masculine gender construction on television shows primarily aimed at women, but it’s mostly just a question of economics. They can only afford to pay five or six actors a day, so bundling your authority figures gives you both a doctor and a police sergeant for the price of one. 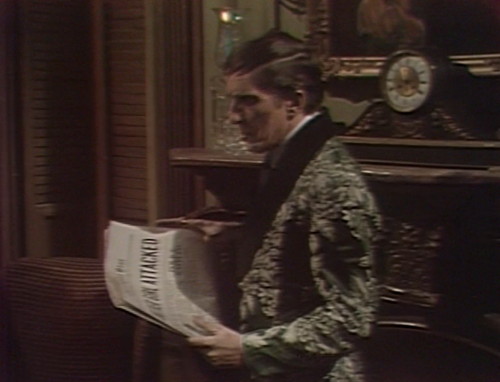 Meanwhile, over at this maniac’s house, Barnabas throws the evening paper into the fireplace. This is not the way that we solve problems. 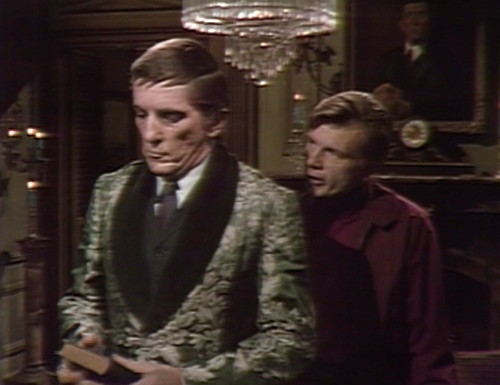 Willie has some concerns.

Willie:  Why’d you do it, Barnabas?

Barnabas:  What are you talking about?

Willie:  The girl who was attacked. It’s all over town!

Barnabas:  It will quiet down.

Willie:  But things were quiet. People were starting to forget, and you had to stir them up again. Now, why? Why did you do it?

This raises an interesting question: Why does Barnabas “do it” at all? As far as we know, there are no rules governing his dietary habits. They’ve never said that he needs to drink human blood every three days, or his hair falls out and he turns into a mummified corpse or anything. As far as we’ve seen, it’s been months since the last time he drank anything stronger than claret cup.

So why is he attacking random girls again? Because we need it to set up the next plot point, that’s why. Stop asking silly questions. 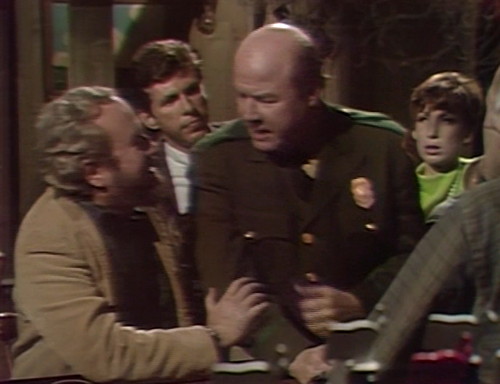 Willie’s in the bar, and he believes every word of this Improv Everywhere performance piece, so I guess it worked, and three cheers for make-believe law enforcement. By the way, what’s with the Anything Muppet in the green dress behind them? It’s been a weird episode, is what I’m saying.

Tomorrow: This Means Your Life.

Maggie holds the newspaper at a peculiar angle, so it’s in the right place for the camera to zoom in on the headline.

In the teaser, Sam asks Maggie a perplexing question: “Now, can’t I trust you, you’re gonna sneak off every time that you’re going away?” She laughs, and hugs him like the idiot child that he is.

Also perplexing: Willie tells Barnabas, “Okay. I just hope you feel as safe as you think you are.”

Bob O’Connell, who plays the Collinsport bartender across three different time periods, gets a rare speaking part in today’s episode. O’Connell plays the usually silent bartender in 58 episodes over three and a half years, beginning with episode 1 and ending in February 1970.

In the regular time period, the bartender is called various names, including Bob, Andy and Pudgy. Today, a pretend-drunk Sam calls him “Bob-aroonie”. He also plays Mr. Mooney, the bartender at the Eagle in two episodes during the 1795 flashback, and an unnamed bartender in one 1897 episode. I only know of three episodes where he speaks — episode 156, episode 419 and today’s.

In the Blue Whale scene today, Sheriff Patterson tells Bob to forget what Sam said. The bartender says “Okay,” and then slips back into silence.

By the way, just to out-nerd the nerds — Dark Shadows Wiki and other fan sources say that the bartender’s full name is “Bob Rooney,” based on what I think is a mis-hearing in this episode. When Sam sits at the bar, he playfully says, “Bob-aroonie, give me a double martoonie on the rocks.” The wiki is wrong on this one. There, I’ve said it. Now I can move on.

Tomorrow: This Means Your Life. 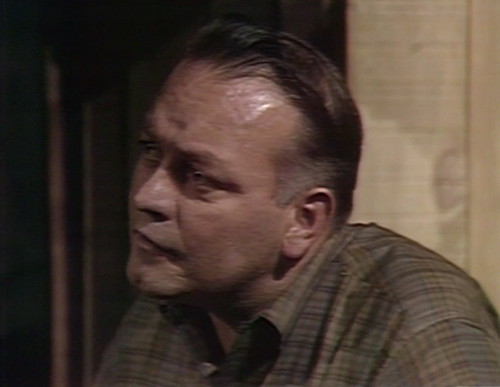