“When I came into your room that night to kill you, I should have gone through with it.”

Today’s episode opens with Dr. Julia Hoffman walking into the Old House to find Barnabas getting ready to leave. Technically, she’s supposed to be coming over to continue her experiments; she believes that she can cure Barnabas of being a vampire. This usually involves injections, seasoned with dialogue about the structure of his blood cells.

But we’ve seen that situation so many times lately that they apparently don’t even need to mention the experiment anymore. Julia just walks in, and asks Barnabas what he’s up to. He calls her “doctor” a few times, but otherwise there’s no mention of the cure, or any other reason that she might be strolling in this evening. It’s actually surprising that she even bothers to knock on the door. Things have become noticeably casual at the Old House.

The main topic of the week is whether young David knows Barnabas’ secret, and what Barnabas is going to do about it. Julia urges him not to do anything rash, and he tells her to mind her own business. You’d think that watching people talk about murdering a child would be inherently interesting. Apparently, that is not always the case.

So let’s head over to Sam’s cottage, where he’s invited Dr. Woodard over for some good old-fashioned ghost hunting. Sam has decided that there’s something strange about the old Collins mausoleum at the Eagle Hill cemetery, and he wants to investigate. As it happens, there actually is something strange about the old Collins mausoleum, so this may be the only time in Sam’s life that he’s actually correct about something. I guess everybody gets lucky once in a while.

This story point is building from Sam and Joe’s hunt for the mysterious little girl named Sarah two weeks ago, and last week’s search for David, who was trapped in the mausoleum. Although “building” is probably the wrong word for it, because the characters can’t seem to settle on what they believe.

Two weeks ago, Sam was the naysayer who thought that there must be a logical explanation for everything, and Dr. Woodard believed in the supernatural. Today, they’ve switched sides, and now Dr. Woodard is frowning and tutting as Sam talks about how strange everything is. It’s like watching a mash-up of The X-Files and Memento, where Mulder and Scully have both had serious brain injuries, and they have to flip a coin every week to decide who’s going to be the skeptic.

But the real headscratcher moment of the day is when Sam reaches into an unlocked desk drawer in the living room, and pulls out what is apparently a loaded handgun.

Brandishing the gun, Sam says, “I think I might take this along, in case I run into any atmosphere that’s unfriendly.”

That’s an unbelievably bizarre thing to say, because they’re only going out to poke around in a deserted cemetery. At the risk of a life-changing spoiler alert, I might as well let you know that there’s a zero percent chance of that gun being fired between now and the end of the episode.

The gun will be mentioned one more time, at the top of their next scene, when Dr. Woodard tells Sam to put the damn thing away before he hurts somebody. And that is the beginning and the end of today’s thrilling action sequence.

But who needs gunplay when you’ve got Chromakey? They’ve only been using this cutting-edge blue-screen technology for about three weeks, and there’s already a noticeable improvement. Last week, they were still having trouble with lighting the actors and the prop trees, and you could see a blue outline around the foliage. They seem to have that problem licked already — just look at the way they’re lighting that tree! It’s perfect.

The fact that the shot still looks completely fake and ridiculous is entirely beside the point. This is the completely fake and ridiculous effect that they were going for, and therefore it is an overwhelming success. Personally, I think that if television shows still looked like this, then today’s prime-time schedule would be a lot more entertaining. 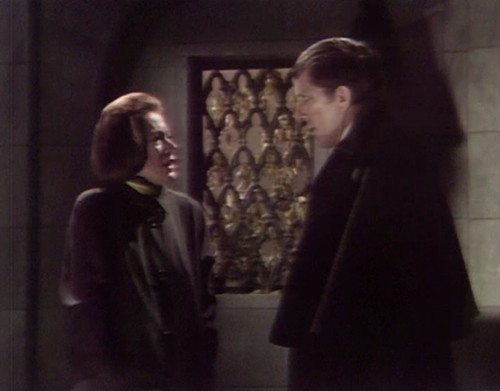 Julia has followed Barnabas to the mausoleum, and the conversation that they have is just incredible.

Barnabas:  Your curiosity is insufferable.

Julia:  I thought I knew all your secrets, but apparently there’s one here in the mausoleum that you never told me about.

Barnabas:  I would advise you to go back to Collinwood at once, for your own good.

Julia:  No. I’m here now, and I don’t intend to leave until I find out why you’ve come here.

And Julia’s line isn’t a challenge, or a threat. It’s a simple statement of fact, delivered in a casual tone that suggests that Barnabas is being a drama queen. As always, Dr. Julia Hoffman is simply unbothered.

She continues to press him.

Julia:  Now, why are you here?

Barnabas:  That’s none of your business!

Julia:  I’ve already made it my business.

Barnabas:  When I came into your room that night to kill you, I should have gone through with it.

Julia:  But you didn’t, and you won’t now. You’ve shared all your other secrets with me, Barnabas. You have no choice but to share this one too.

Isn’t that amazing? They’re in a cemetery, in the middle of the night, and he’s threatening to kill her — and she sees this, correctly, as a bonding moment. How is he not in love with her yet?

And now we come to one of Dark Shadows’ Great Moments in Blocking; students of the theater arts should find this particularly interesting.

Sam and Dr. Woodard are walking through the cemetery, grumbling about the storm that’s about to break. They stand still for about five seconds, apparently not registering the guy who’s standing right in front of them.

All of a sudden, Sam leans forward and pretends that he’s coming to a stop.

And that’s not a typo — Sam actually says “Hold it, Sam.” It’s amazing.

They pretend that they’re peering into the darkness, and Sam says, “I can’t see who it is, but we ought to make it out in a minute.”

The caretaker is still standing there, in the shot with them, not moving at all. He calls to them, and they all take two steps towards each other, and now they’re having a conversation. 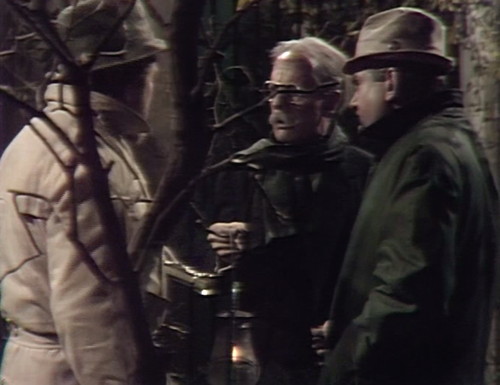 And then we get a whole caretaker scene, with a tree branch perfectly positioned directly in front of the actor’s eyes.

As you know, I’m the first one to complain about a dull episode, but sometimes you get a day like today, when the show is just strange and impossible and completely unique, and I love it more than anything else in the world.

Okay, let’s get to the inevitable bedroom-farce cliffhanger. Barnabas brings Julia into the mausoleum’s secret room so he can look for clues that David’s been there. He finds a broken pocket knife, and correctly deduces that David must have been trying to pry the door open from the inside.

Then they hear Sam and Woodard approaching the mausoleum. Barnabas and Julia quickly shut the secret panel, and they listen at the wall as the investigators prowl around the empty tomb.

Finally, Dr. Woodard notices the plaque on the wall for Sarah Collins. He goes through the list of things that they know about the mysterious little girl that everyone’s been looking for — her old-fashioned dress, her handmade doll, the secret place that she shared with David.

“Either all of this is an amazing series of coincidences,” he says, “or Sarah really is a ghost.”

So now Woodard believes in the supernatural again. Let’s see if he still remembers this the next time we see him. It’s an experiment!

(More) Dark Shadows bloopers to watch out for:

In the opening teaser, something goes wrong with one of the cameras for a moment. The screen slowly fades to white, and then the fault is corrected.

Someone in the studio coughs just as Barnabas opens the mausoleum gate.

As they enter the cemetery, Sam tells Woodard that the Collins mausoleum is set apart from the other graves, but there are gravestones less than two feet away from the mausoleum entrance.

This is the last episode for Daniel Keyes, who played the Eagle Hill cemetery caretaker in 9 episodes, starting in January 1967. Keyes was supposed to return as the caretaker in a future episode, but he refused to cross a picket line during a strike that I’ll talk about a lot in a few weeks. Keyes was replaced by Peter Murphy in episode 337 and episode 360.

After Dark Shadows, Keyes played Ben Jessup on a CBS soap, Where the Heart Is, from 1969 to 1972. He also made brief appearances on NBC’s Texas, and ABC’s Ryan’s Hope. He also appeared in the 1970 film I Never Sang for My Father, and in 1972, he played Dr. Josiah Bartlett in the film version of the Broadway musical 1776. (The 1776 cast also included David Ford, who plays Sam Evans on DS, and Virginia Vestoff, who plays Samantha Collins during the 1840 storyline.)

Keyes was in his early fifties when he appeared on Dark Shadows, although he played the caretaker as if he was 140 years old.

Another fun trivia note, courtesy of the Dark Shadows Wiki — this is the first episode not to feature any of the show’s original cast members. (The character Sam Evans was part of the original cast, but the role was recast starting with episode 35.) The first present-day episode that doesn’t include any of the original 1966 characters is episode 475, about seven months from now.