“I find it very egotistical of you to think that only your kind can come back from death.”

The moon rises over the great estate of Collinwood, and at the Old House, Barnabas and Julia are spending a quiet evening at home. She’s preparing an injection that she hopes will cure his vampirism, and he’s browsing through a family album, dreaming of the people that he’d like to kill.

She observes that he’s been looking at the family portraits a lot lately, and she knows why — he’s worried that his sister, Sarah, has returned. He scoffs.

Julia:  So have you, Barnabas, but you’ve come back. Why can’t she?

Barnabas:  What a ridiculous question. Sarah was dead when she was ten years old; she was the soul of innocence. She hadn’t been afflicted by the same problem I had.

Julia:  I find it very egotistical of you to think that only “your kind” can come back from death.

This is what passes for casual conversation at the Old House these days. Isn’t it wonderful? I could listen to them bicker all night.

Barnabas tells her to mind her own beeswax, but she says that she has a stake in this.

Julia:  The initial injection created a dramatic change in the structure of your blood cells. But there’s some emotional disturbance that you’ve been having that’s been very detrimental to our experiments.

Julia has the trappings of a doctor, including a white coat — or, at least, a pale blue coat that would look white on a black-and-white TV screen. (Now that they’ve switched to color, they should probably get her a “white coat” that’s actually white.)

But this isn’t just a medical experiment, with material effects on Barnabas’ blood cells. This is alchemy, and the physical change in his body is connected to his spiritual journey — restoring his humanity, and his capacity to feel empathy and love. The “emotional disturbance” is relevant.

Barnabas admits that he knows Sarah has come back. Julia asks how he knows, and he says that he heard her singing.

Julia cocks her head to the side, and says, “Where were you when you heard her singing?”

He turns away, muttering, “Never mind.”

She tries again. “Where were you, Barnabas?”

He takes a few steps toward the fireplace, unable to look at her. “It doesn’t matter where I was,” he says. “The important thing is that I heard her, that’s all.”

She follows him across the room, relentless: “I think where you were might very well have something to do with why Sarah tried to contact you. Where were you, Barnabas?”

By the way, the blocking is just amazing in this scene. Like almost every soap opera scene, it’s just two people in a room, talking. They could have had this whole conversation sitting down in the armchairs. But instead, Barnabas is on his feet, stepping away from this mad woman who’s pressing him to admit what he’s done, and she’s chasing him around the room.

That’s pretty much basic stagecraft — even the director of a high-school play would be able to figure out how to do that. But it’s remarkable here, because soap opera directors in the 60s just didn’t bother to set up shots like that. 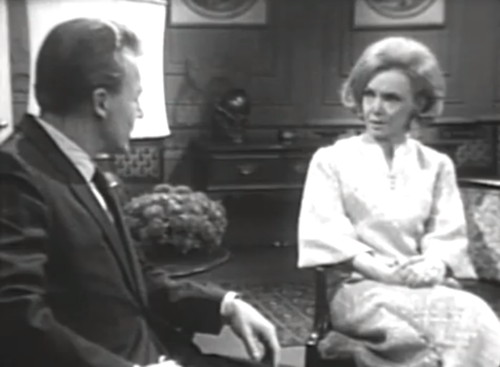 Here’s a December 1967 episode of Love Is a Many Splendored Thing, where they have a very similar scene — a woman who clearly has something to hide is being asked a series of pointed questions — but they do practically the entire four-minute scene sitting down.

At one point, the woman gets up, picks up a cigarette and sits down on a sofa to light it, but it doesn’t mean anything. It feels like the actress just wanted a cigarette, and if it’s 1967 and you want a cigarette, nobody stops you.

But when Dark Shadows is good, they actually pay attention to blocking and setting up interesting shots. This is good Dark Shadows. 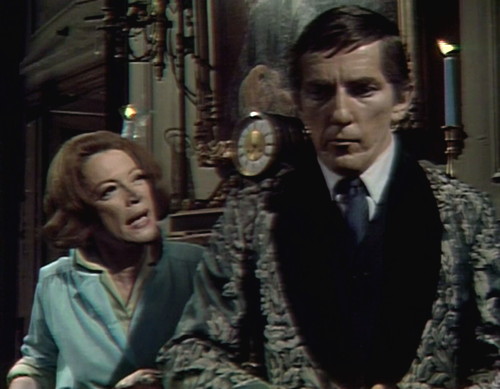 Okay, back to the scene. Barnabas admits that he went to Maggie’s room the other night, planning to kill her. But he heard Sarah singing, and he couldn’t go through with it. Julia is amazed.

Julia:  Do you mean that Sarah actually stopped you from killing Maggie?

Barnabas:  I told you. I heard the song that she used to sing, and I began looking for her.

Julia:  Well, why didn’t you kill Maggie first, and then look for her?

I’d like to take a moment, just to let that line of dialogue sink in.

“Why didn’t you kill Maggie first, and then look for her?”

Amazing. Only on Dark Shadows.

Barnabas walks back across the room; he’s still in flight mode.

Julia:  The injection can wait. I want to know why a little girl of ten can make you react this way.

So Barnabas digs deep, faces the teleprompter, and starts to monologue.

Barnabas:  Sarah was an exquisite child. She was the sum of everything that made living on this earth worthwhile. The holiness of her heart’s affections were pure and gentle. I loved her in a way that I loved no other human being.

Now that the alchemist has earned her moment of catharsis, she gets down to work.

Julia:  Has it occurred to you that, perhaps, it was you who brought her back?

Julia:  It is altogether possible that you could have willed her to come back… unconsciously, of course.

Julia:  Maybe because she symbolizes that side of yourself that you’ve lost.

And that’s why Julia is scary — she’s the Devil, and she speaks the truth.

This is a very common trope in fiction, going all the way back to the Serpent in the Garden of Eden. “Good” characters are sensitive, and they care about hurting people’s feelings. It’s the “bad” characters who’ll actually tell you the truth.

Think about Spike from Buffy the Vampire Slayer, or Benjamin Linus from Lost. Think about Loki in the Avengers movie, bringing the tension between the heroes to the surface.

The Devil isn’t really “the Prince of Lies,” because lies can’t hurt as much as a well-aimed dagger of truth. Barnabas is a guy who kills people with his teeth, and he’s being chased around his own living room, tormented by a serpent who’s armed with nothing but insight.

Meanwhile, on the Collinwood terrace, Vicki and Burke are talking about whether she’s going to accept his marriage proposal.

He gets frustrated, walks a few steps away, and lights a cigarette. Vicki makes up her mind — and says yes, she’ll marry him.

Delighted, he throws the lit cigarette away, and Collinwood catches on fire and burns to the ground. The end.

Tomorrow: The Back of My Mind.

Liz flubs a couple lines when she’s talking about Julia’s research. First, she says, “You devote every day to it, and most of all — most of your evenings.” She also says, “We’ve nearly — never really discussed your work in detail.”

On the terrace, Vicki comes in too early with a line, stepping on Burke’s:

Burke:  But I can promise you one thing. You’ll never be bored with me. There won’t be one dull moment in our lives.

Vicki:  You sound as though you have my mind all made up for me.

Also: the first act is in the Old House, with Barnabas and Julia together. In the second act, Julia returns to Collinwood, and tells Vicki that Barnabas is going to come by later that evening and take her into Collinsport.

Barnabas shows up at Collinwood in time to hear about Vicki’s engagement, and then he and Julia leave together. Obviously, the writers wanted to get Barnabas over to Collinwood so that he could react to the news of the engagement. But within the context of the narrative, why would they come back to Collinwood separately, and then leave again together?

In that December 1967 episode of Love Is a Many Splendored Thing, the conversation that I was talking about is interrupted by a familiar face. It’s John Karlen, who plays Willie. He played Jock Porter on Splendored Thing, during a period when his character was temporarily written out of Dark Shadows.

Tomorrow: The Back of My Mind.