Today’s episode begins with Vicki standing at the drawing room windows, looking aimlessly at the sunset. There’s a distressingly large number of episodes that start with Vicki staring into space, in one direction or another. It’s like nobody’s ever told her that television exists.

Julia strolls in, and Vicki mentions that last night she dreamt that someone was in her room. When she woke up, her music box was playing. Obviously, Julia knows that means that a vampire was sneaking around Vicki’s room at the end of the last episode. I probably should have mentioned that in yesterday’s post, but I had other things on my mind.

And besides, that was the third time since July that Barnabas stood over Vicki’s bed and wimped out. He did the same thing in Maggie’s room the other day. I didn’t mention that one either, because if he’s not going to follow through on his nighttime assaults, then he might as well be Burke. We already have boring dudes on the show who don’t do anything. You’re a vampire. Bite something.

Julia tries her best to put Vicki off the track, which is kind of fun; she’s become a spy for the other team. But she doesn’t really have to work very hard. This is another one of those vague dread conversations where somebody says, “I don’t know, but I think that someone was there, and it frightens me.” Also: “I’m not worried. It’s just strange, that’s all.” I think if they don’t have real dialogue to say, then they should just admit it, and let us listen to the incidental music until they come up with something.

Then we go over to the Old House for some more Great Moments in Time-Filling.

We start with a closeup on Barnabas’ portrait. The only sound we hear is a clock chiming the hour.

Then the camera slowly pulls back, revealing the clock, which is still chiming.

The camera keeps pulling back, showing more of the room. The clock finally finishes striking. Apparently it’s 9:00, not that that makes any difference.

Then we cut to a shot of some candles, for no particular reason. This scene has been going for thirty seconds so far, and we’re still doing establishing shots of the decor. It’s like a TV spinoff of I Am Legend that takes place in a part of the world that Will Smith isn’t in.

Barnabas finally shows up, emerging through a door and walking into the center of the room.

He calls for Willie. There’s no reply.

Barnabas walks over to the stairs, and calls again: “Willie!”

Then Barnabas says, “Why didn’t you come when I first called?” which makes me want to punch somebody in the face. It’s just one of those episodes.

Julia shows up eventually, so this isn’t a complete waste of time.

She tells Barnabas, “The injections are beginning to take effect. The structure of your blood is beginning to change.” And it says a lot about this episode so far that my response is, Oh, thank goodness. They’re finally talking about something interesting. It’s probably the first time I’ve ever looked forward to a discussion about blood structure.

The examination goes well, but there’s some unpleasant business to attend to, so Julia fixes Barnabas with a stern look, cocks her head at an absurd angle, and starts getting real.

She tells him, “You broke your word to me. You were in Vicki’s room last night.”

He tries to act casual, like it’s no big deal. She asks why he was there, and he says, “I merely wanted to look at her,” like that’s a totally normal thing to do.

But she’s on a roll now.

Barnabas:  I admit to the temptation… but I withstood it.

Julia:  Suppose you were found in her room. How would you have explained your appearance there?

Barnabas:  Fortunately, there was no necessity to explain anything.

Julia:  But it could happen the next time, and there must be no next time, do you understand? Stay — away — from Vicki. 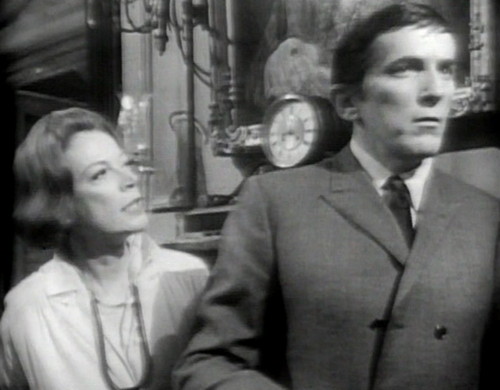 Julia:  In this case, you must do as I say. If anything happened to Vicki, everyone would ask questions, and you I would have a hard time finding the answers. If you want to survive, if you want to live a normal life — stay away from Vicki. Is. That. Clear.

He looks down, like a guilty little schoolboy who was caught stealing chalk. It’s adorable.

So that scene wraps up, and then there isn’t much left to talk about. There’s a long scene with Burke and Vicki on the terrace, and he proposes to her, and then they make out for a while. But honestly, who even cares.

We come back from commercial to the Barnabas and Julia scene, but it looks like they started a little early. The first line we hear is Barnabas saying, “What does that mean?”

After Julia listens to Barnabas’ heartbeat, he stands up and buttons his jacket up, but he misses the top button. It stays unbuttoned for the rest of the episode. 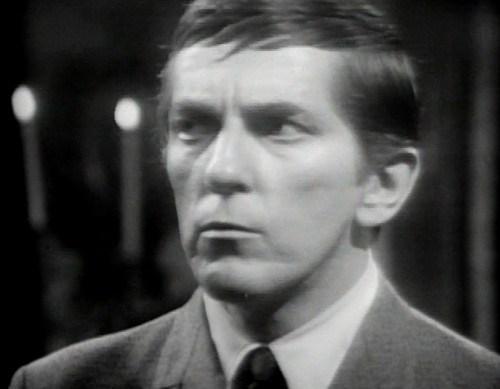