“This house isn’t empty. Not with the secret it holds.”

Willie and Barnabas are having another staff meeting today, and that’s always worth watching. I’m glad they’re still investing screen time in these two, because it’s the most complex relationship on the show.

The subject of today’s meeting is Barnabas’ plans for Vicki. Willie, ever the optimist, seems to think that he can talk his boss out of whatever cockamamie plan he’s hatching to win Vicki’s love and turn her into his dead girlfriend.

Barnabas arches an eyebrow. “Willie,” he purrs, “you do get to be a bore. No wonder I seek other company.”

You can tell that Barnabas is in a good mood today, because he’s being arch and formal. Barnabas in a bad mood can get kind of strangly. 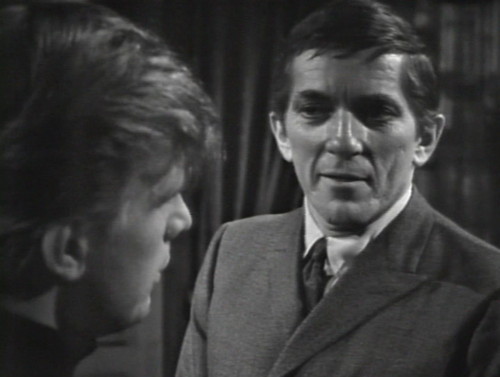 But then the conversation takes a turn that we haven’t seen before.

Willie:  You’ve got plans for her, Barnabas. I don’t like that.

Barnabas:  I have no plans. At least, nothing sinister. In the manner of all men attracted to beautiful women, I shall try to make Miss Winters favor me with her attentions.

Willie:  But you’re not an ordinary man.

So that’s quite a startling rebranding move. They’re still spitballing ways to turn this psychotic serial killer into a romantic hero, and this is an interesting step — Barnabas is advancing the viewpoint that being a vampire is superior to a normal human existence. 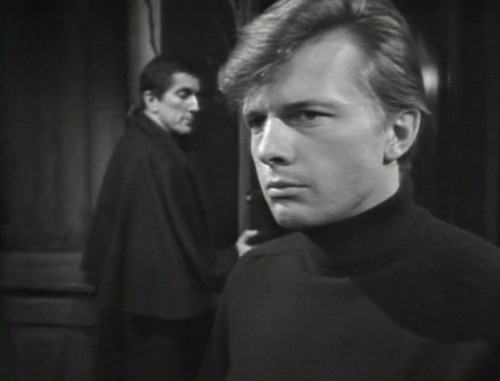 During Maggie’s captivity, Barnabas tried to sell her on the idea that taking on Josette’s identity was an honor. But that was essentially class-based; Maggie was being offered the chance to upgrade from commoner to princess.

We saw a hint of this new direction a couple weeks ago, when Barnabas stood with Vicki in the moonlight, and he started talking smack about the sun and how great it would be to only exist during the gentle night hours. But now he’s taking that idea further, and all of a sudden his “curse” is a blessing.

Barnabas:  It’s strange, isn’t it? How people cling to life. How they seem to consider it much better to grow old, ugly and humiliated, than to —

Barnabas turns to leave, but Willie has the last word.

Ouch. Jiminy Cricket for the win. 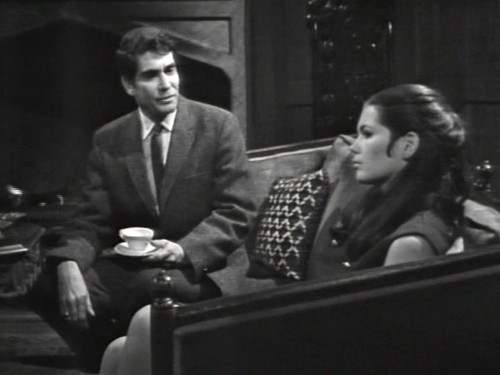 Now we check in at Collinwood, where Burke is staring at Vicki, and Vicki is staring into space.

Yesterday, she came home and made the preposterous announcement that she’s fallen in love with a house that she found on the North road. You’d better believe we’re going to hear more about that house today.

Vicki:  It’s enormous, Burke! And every room has a different view.

Burke:  Oh! You went inside.

Vicki:  Well, I had to. So I just looked the other way when I walked past the no trespassing sign, and went right in.

Okay, wow. I thought it was annoying last week when she kept talking about the music box. I didn’t know how easy I had it. 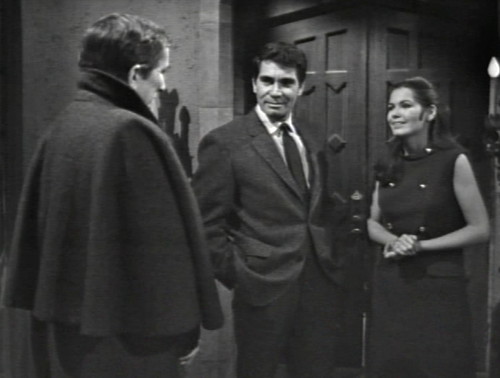 Burke figures she’s not going to shut up about it, so they might as well drive over to the house and take a look. But just as they’re leaving, Barnabas arrives, and Vicki gets to start all over again with the house routine.

Vicki:  Oh, it is. It’s the most charming house I’ve ever seen.

Barnabas:  And the emptiest.

Burke:  Well, now how did you know it was empty?

And now Barnabas has to look surprised, and stammer out a weird response: “Well, I just surmised it. Old houses with people living in them lose a great deal of their charm.”

That’s an odd moment, and they do it again a minute later. Barnabas mentions the “no trespassing” sign, and Burke says, “Well, that’s odd. Vicki mentioned there was a ‘no trespassing’ sign there, but how did you know about it?”

It’s a confusing thing to put in the middle of their scene. Are they suggesting that Barnabas already knows something about the house? Or is he supposed to be psychic? I seriously have no idea what they’re driving at.

This episode was written by the new scriptwriter, Gordon Russell, and it’s possible that he hasn’t really been briefed on all of Barnabas’ spooky vampire powers. He may just be sticking in weird moments at random, and hoping for the best. 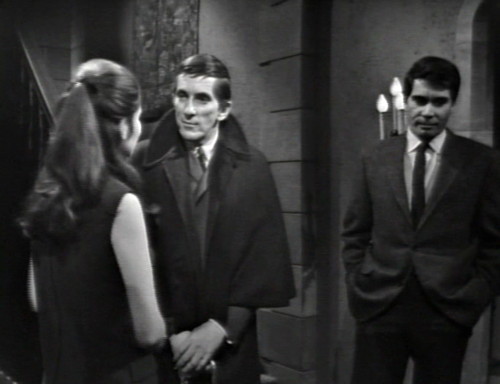 Then they stand around and have a super annoying conversation about modern conveniences.

Barnabas:  I suppose most people enjoy the creature comforts. I don’t expect them to live like I do, by candlelight.

Vicki:  It’s true, though. Your house has a very special quality to it, because you’ve remained true to the period, and not put in things like electricity.

Burke:  Well, if you’ll pardon me for being revolutionary about it, I happen to like electricity. And heat.

Burke does that “electricity. And heat.” gag again in the next scene. He thinks it’s a show-stopper. Presumably, the audience is supposed to be rooting for Burke here — he’s human, he has the home field advantage — but he just comes off as whiny. 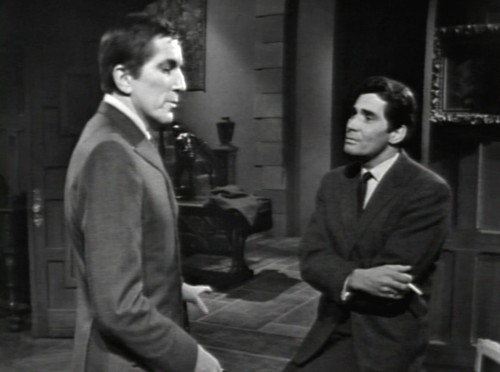 Vicki goes upstairs to change, and Barnabas and Burke retire to the drawing room for a sarcasm contest.

Barnabas starts baiting Burke, saying that nobody really knows what happened during the time Burke was away from Collinsport, earning his fortune.

Burke:  You know, it’s interesting. You must not have known many people there. You never speak of friends in England.

Burke:  Oh, I see. You spent the greater part of your life there, but you never met one single living soul, is that it? 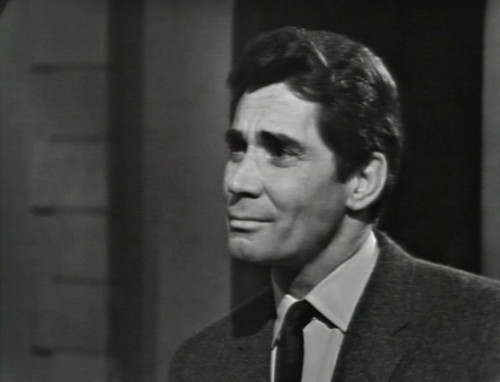 Burke is actually winning this fight on points, but we’re rooting for Barnabas anyway. We know what Barnabas’ secrets are, and they’re awesome secrets, and he’s an interesting character.

We don’t really have any idea what Burke’s secrets are, and I don’t believe that the writers have any intention of figuring it out, so he’s just a hollow shell of a man. It doesn’t help that Anthony George can only play two emotions, petulant and smug. 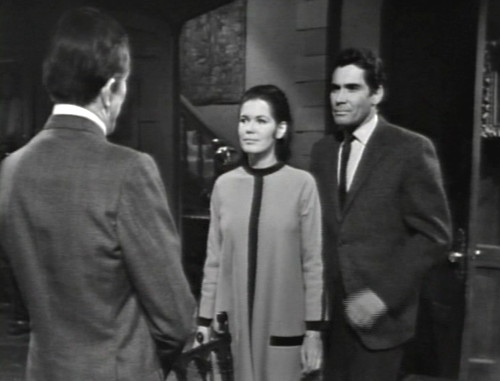 So Vicki finally comes downstairs, and tomorrow we’re all taking a field trip to the big dark empty house, so we can talk about how great it is when you have electricity. And heat.

There are some nice Barnabas flubs today.

In the first scene, Barnabas refers to Julia as a “he”:

Willie:  What happens if Dr. Hoffman can’t keep her from telling everything she knows?

Barnabas:  All we can do is hope that he has the situation completely under control.

When they’re talking in the foyer, Barnabas and Burke both say the same line:

Barnabas:  People do so many things that are wrong.

Barnabas: Things like that. Yes. But not that I blame them.

And he’s unsure which question to ask Vicki:

Vicki:  There’s something else that we were talking about — taking David along, and making a picnic.

Barnabas:  A picnic? Why? When?

I’m posting this blog entry on Christmas Day. It’s an early August episode, so there’s not much room for holiday cheer. But Dark Shadows never acknowledged any holidays, or anything at all that takes place outside their weird little collection of haunted houses.

The show never aired on Christmas Day, because it was always pre-empted for football games. The episodes that aired around Christmas were never particularly festive, as you can see:

The only Dark Shadows Christmas stories that I know of are two audio dramas produced by Big Finish:

“The Christmas Presence” (2006): Quentin Collins issues a summons to the local spirits to attend a Christmas party at Collinwood.

“A Collinwood Christmas” (2012): On Christmas Eve, Jamison Collins and a gypsy, Ivanka Romano, encounter ghosts from the past. 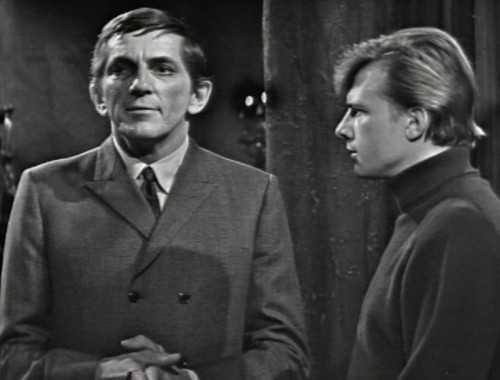