Okay, you’re not going to believe this, but today’s episode of Dark Shadows begins with Victoria Winters looking out the window. There’s a storm outside, and when the lightning flashes, she starts, as if she’s seen something upsetting. Then she walks over to her bedside table and opens that damn music box again. Then Carolyn comes in, and they talk about the music box, and the weather, and then we cut to Barnabas standing outside, staring up at Vicki’s window.

In other words: This is a mash-up of the beginning of every episode from the last five days. It’s like they realized during the dress rehearsal that they’d forgotten to write the first act, so they just tore a page out of all the other scripts this week and now we have to watch it. 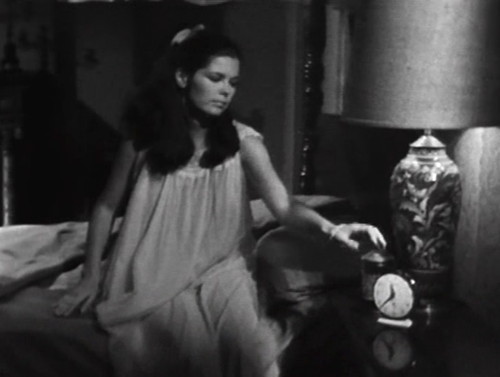 Vicki goes to bed, and they make a point of showing her winding the alarm clock. It’s 11:38pm.

They do a little cross-fade to the window, and then back to the clock, which is now showing 1:35am. That means that Barnabas has been standing outside in the rain for at least two hours. He must be drenched.

Barnabas appears in the room and goes over to Vicki’s bed, ready to bite her. Then she moves in her sleep, and her face catches the moonlight, and he loses his nerve again. They already did this scene two episodes ago, but it’s an important character moment, so they’re doing it twice.

So instead of biting her, he just opens the music box and leaves the room. That’s probably the most pointless thing that he could possibly do, because she listens to that music box every five seconds anyway.

You know, everybody says that two girls in bed together is super hot. It turns out that this is not always the case.

Vicki and Carolyn go downstairs, and they find Julia reading by candlelight, because trouble never sleeps.

Carolyn goes to the kitchen to get coffee, and Julia strikes up a conversation.

Julia:  What’s that you have?

Vicki:  It belonged to Josette.

And holy cow, has Julia not seen the music box until now? She must be the only person in a five-mile radius who hasn’t heard all about it. This isn’t even their first Josette-related conversation.

Vicki plays the music box, and Julia agrees that it’s a beautiful melody.

Then Vicki says, “I especially love the tinkling sound it makes,” which is one of those lines that makes you wonder if today’s script was translated, as Tom Baker would say, from the fucking Albanian.

But the point of the scene is that Julia makes an important connection.

Julia:  It does have a tinkling quality to it. Someone recently was trying to describe a melody to me, it was a — it was a tinkling melody. Just like this one…

A minute later, Vicki mentions that Josette had a favorite perfume.

Vicki:  It was jasmine.

Vicki:  Yes, very strong, and very unforgettable. Mr. Collins let me wear some the night of the party.

Vicki:  Yes, in a bottle in Josette’s room.

Julia:  A strong fragrance, and a tinkling melody. How very, very interesting.

This is an interesting moment, because Julia is referring back to a therapy session that she had with Maggie more than a week ago.

Bringing back memories from her abduction, Maggie remembered a tinkling sound, and a sweet fragrance. But nobody’s mentioned it since then, and Julia doesn’t explain the connection now.

This is a crucial plot point — a moment of insight, when Julia suddenly understands exactly what happened to Maggie — but if you weren’t watching the show last Tuesday, it sails right over your head. This contradicts all the usual laws of soap opera writing. Julia should be recapping like crazy right now, to make sure that everybody’s following the plot.

And stepping back for a second — that’s exactly what I’m doing right now. I don’t know if you’ve read all of these blog entries, or if you just showed up and this is your first one. So I’m making a point of linking back to last week’s episode, and explaining the whole thing slowly, just in case. Which means that I’m recapping more than a 1967 soap opera.

The Dark Shadows writers must be incredibly confident right now, if they feel like they can refer back to a specific episode, and expect that the audience will follow it.

Then Julia pushes things too far.

Julia:  Mr. Collins allows you to wear Josette’s dress and perfume, fills you in on her history, and gives you the music box.

Vicki:  What are you trying to say?

Julia:  Wouldn’t it seem that he’s trying to… recreate Josette?

Vicki:  No! Absolutely not.

Vicki gets up, and crosses the room.

Vicki:  I think that that’s an absurd notion.

Julia:  Well, it’s just a thought, an impression I had.

Startled and offended, Vicki walks out of the room, just as Carolyn is coming in with a tray.

Vicki walks out of the room and goes upstairs.

Julia shrugs, and they sit down together.

Julia:  Mmm, the coffee smells good. I guess it must have been the storm that upset her.

Which means that the rules of the show have just changed in the last few minutes.

When this episode started, it was Vicki’s story. She had feelings about the storm, and we were expected to care about them. We watched her wind a clock before getting into bed. Obviously we find her fascinating.

But now Vicki is upset, and she’s gone back upstairs — but we don’t follow her. “Old” Dark Shadows would have gone upstairs to the bedroom for more talky scenes about her feelings. We stay downstairs with Julia, who shrugs it off and moves on with her day.

I think the show has changed, and it’s not “old” Dark Shadows anymore. Welcome to the new show.

And just to prove that point, as soon as Carolyn turns her back, Julia grabs her coat and heads out to the Old House.

Julia lurks outside the window, eavesdropping on the vampire, because that is the kind of television show that we’re watching now.

Barnabas is sending Willie to Portland on a shopping trip, but he wants him to get back as soon as possible.

Barnabas:  I want you to look after the house with great care.

Barnabas:  But Miss Winters was here the other day.

Willie:  You said she could come any time she wanted to.

Barnabas:  I know, but she came with that Hoffman woman. I don’t really know who she is, but she asks too many questions. I don’t want her around here. 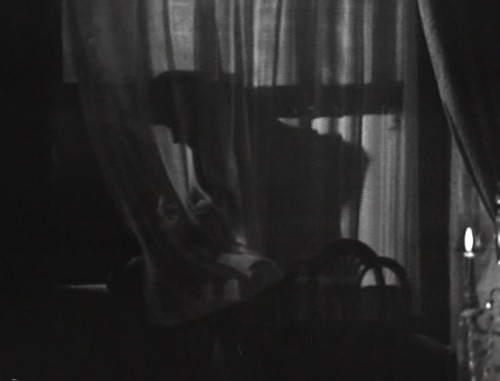 Willie leaves for Portland, Barnabas goes downstairs to his coffin, the sun comes up, and that Hoffman woman climbs in through the window. 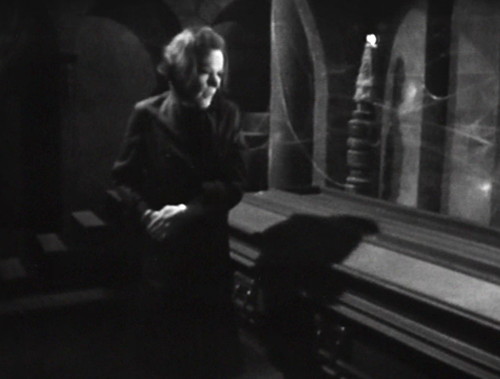 Not wasting any time, Julia heads downstairs and finds Barnabas’ coffin. Without a moment’s hesitation, she opens the coffin…

… and finds Barnabas, resting in peace.

Which is incredible, and this isn’t even the Friday cliffhanger. Things are about to change.

In the first scene, Vicki closes the music box when Carolyn knocks on the bedroom door. The music keeps playing for a few seconds after the box is closed.