“Even historians have a certain amount of feminine vanity.”

It’s another cloudy day at Collinwood, and occasional governess Victoria Winters is daydreaming at the drawing room window, staring outside at nothing in particular while she listens to Josette’s music box. David walks into the room, and the music fades.

Then we realize that she’s not holding the music box. We were just hearing the music that plays inside Vicki’s head. Apparently we can do that now.

This raises the possibility that all of the incidental music that we hear on the show is actually just happening in the characters’ minds. So when something surprising happens, they turn around and say to themselves, Dunn! Dunn! DUNNNNNN!

In walks Dr. Julia Hoffman, noted blood specialist, mesmerist, and pathological liar, who’s staying at Collinwood under an assumed identity — Miss Julia Hoffman, historian. She gets away with this, despite the fact that she runs a well-known sanitarium only a hundred miles away, because it’s 1967 and you can’t just Google people.

It’s an unusual plot device for a soap opera, especially in the 1960s. A character might pretend to be pregnant, or unmarried, but you didn’t see a lot of soap doctors pretending to be family historians. It just wouldn’t come up.

This is actually a farce plot; it’s closer to a P.G. Wodehouse novel than anything on television. Wodehouse wrote the popular “Jeeves and Wooster” stories, and his most common plot device was for a character to gain entrance to a mansion or country estate by pretending to be a nerve specialist, or a portrait painter, or a pig expert. Wodehouse never wrote about a doctor/vampire hunter pretending to be a genealogist, but it’s only because he never got around to it.

The farce influence will be important in the upcoming storyline, because that genre brings a lot of useful storytelling devices into play — mistaken identities, outrageous coincidences and spirited MacGuffin hunts. A few months from now, they’re going to spend two weeks chasing after a notebook that at one point will be hidden inside the grandfather clock in the Collinwood foyer.

This is all part of the larger project of rebranding Barnabas as a loveable rogue, rather than a bloodthirsty serial killer. If that’s your goal, it helps if you can lighten the mood a little.

The same thing happens in 1969 with Quentin Collins, who starts out on the show by possessing children and murdering harmless old people, and then spends a couple weeks in a screwball comedy treasure-hunt storyline involving several forged versions of his grandmother’s will.

Julia is actually super adorable with David; she makes jokes and smiles a lot when he’s around. At one point in this episode, she affectionately tousles his hair, which should feel weird considering that they’ve basically just met, but instead it feels genuine and warm. Julia can sometimes seem like a stone-cold mendacity machine, so it’s nice to see a more human side here. 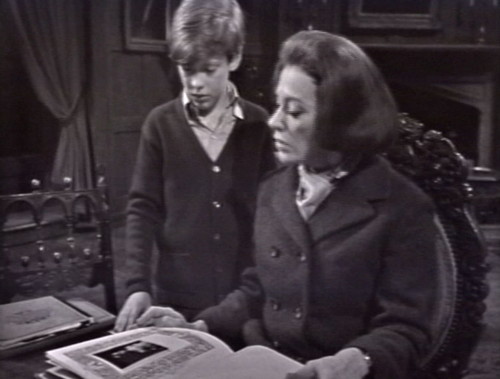 David shows Julia a book of Collins family portraits. This is a device that they use a lot on the show, and often in a way that makes you wonder how book publishing works in the Dark Shadows universe.

In this scene, Julia is flipping through pictures of portraits that we’ve seen on the walls — Joshua Collins, Jeremiah Collins, Barnabas Collins — and then stops on a picture of Sarah Collins, Barnabas’ little sister who died when she was ten years old.

There are two curious things about this scene. First, just to nitpick, the picture that they’re looking at is clearly a photograph rather than a portrait, and they didn’t have photographs in the 1790s.

More importantly — David makes a big deal about being surprised by this picture.

David:  Wait, let me see that.

David:  I’ve never seen it before.

Julia:  The picture of Sarah Collins?

David:  No. Hmm. I never even heard of her. And I know all about my ancestors.

So the implication is that somehow this page has been supernaturally inserted in the family album, to help David and Julia figure out that the weird girl that David met outside the Old House a few weeks ago is actually the ghost of Sarah Collins.

And, I have to say, we’ve seen Sarah in action quite a bit, and this particular caper seems to be above her pay grade. She’s more the “leave an old toy lying on the floor” type of girl. 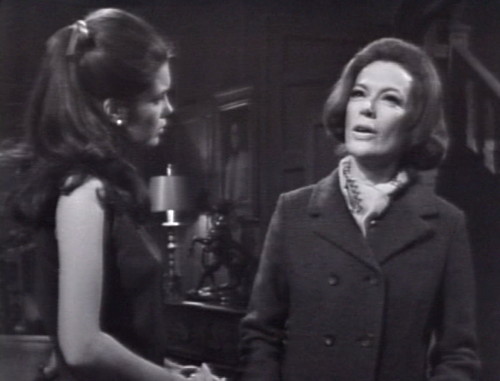 But the really important moment happens when Julia talks to Vicki about Barnabas’ restoration of the Old House.

Julia:  Do you know if it’s authentic in all details?

Julia:  I saw an engraving once, and there were mirrors in the drawing room, huge gilt mirrors. And when I was at the Old House yesterday, I don’t remember seeing them. Maybe they were put into another room.

Vicki:  No, I don’t think so. As a matter of fact, I don’t remember seeing any mirrors anywhere in that house.

This is supposed to be a clue that Julia suspects that Barnabas is a vampire, but it’s a very odd one. They still haven’t done a scene where Julia notices the most obvious clue, which is that nobody has ever seen Barnabas during the day. That’s a thing that people would notice. The absence of old mirrors is not a clue. Old mirrors get broken. 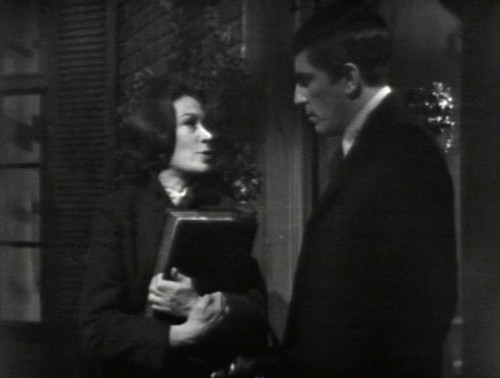 Anyway, Julia borrows the book and heads over to Barnabas’ place, where she talks her way into the house.

Barnabas told her yesterday that he doesn’t want to help with her Collins family history, and today he looks her in the face and says, “I don’t want to sound rude, but I can’t imagine what we have to discuss.”

And then forty-five seconds later, she’s sitting inside his house while he looks at the book that she brought. She is a mythical trickster-figure and there is no stopping her.

While Barnabas is occupied looking at the pictures, Julia pulls a compact out of her purse and checks him out in the mirror.

AND HE DOESN’T APPEAR IN THE MIRROR.

This — let’s face it — is possibly the silliest moment in all of Dark Shadows up to this point. It defies all reason. 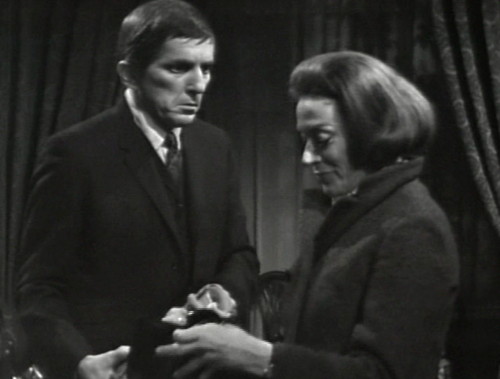 Barnabas turns and sees the mirror, and barks, “What are you doing?”

Julia giggles and puts the compact away, simpering, “Even historians have a certain amount of feminine vanity. I was just checking my makeup.”

And that’s fantastic. A huge, high-camp farce plot point that involves both mortal danger and makeup. I love this scene more than I can ever say.

Julia exits, and for the second episode in a row, Barnabas is left standing awkwardly in his drawing room, with a stunned expression on his face.

This won’t last forever. Next week, we’ll have several days where Vicki and Burke spend the episode talking about an abandoned house. But for today, at least, Dark Shadows is perfect.

David tells Julia that one of the portraits is David Collins, his namesake. This elder David is pictured right in the middle of the 1790s family, with Jeremiah, Joshua, Naomi, Sarah and Barnabas. We eventually meet a lot of the Collins ancestors, going all the way back to 1692, and we never see another David Collins.

When Julia shows Vicki the picture in the album, she says, “It’s Sarah Collins, the sister of the original Barnas-bas Collins.”

Standing at the door of the Old House, Julia says, “Then I’ve made the trip in vain. But, since I have made the trip… why don’t you let me show you — them to you anyway?”

The order of the pictures in the book changes when Julia shows the book to Barnabas. If you watch closely, he actually flips to the same page twice.

The image that Julia sees in the compact mirror doesn’t really match the line of sight from the mirror to Barnabas. Maybe Barnabas really does appear in the mirror, but she’s pointing it in the wrong direction! After all, we’ve seen his reflection at least twice so far — in episode 241, and in episode 278 (pictured below).

The mirror sequence was inspired by the 1931 Dracula film. In a key scene, Dr. Van Helsing notices that Count Dracula doesn’t appear in the reflection of a mirror set in the inside top of a humidor. There are several shots of the mirror’s reflection, with Dracula missing from the shot.

This episode was recorded at the end of a six-day taping week. They had to do a six-day schedule for a few weeks, because pretty soon they’ll take a week break while they switch over to using color cameras. That’s right — Dark Shadows will be in color by the end of next week! 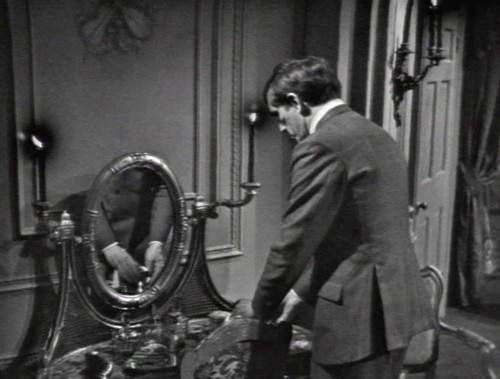