So, you know that blackmail storyline where Liz had to do everything that Jason said, because otherwise she’d go to prison and her daughter would hate her forever?

Well, guess what? Liz finally told everybody that she killed Paul, and now she’s going to prison, and her daughter hates her forever.

But not really. It turns out that Liz never killed Paul in the first place, and Carolyn would have forgiven her even if she had.

Carolyn spent the night wandering around outside, in clear violation of Collinsport’s recent curfew. She’s given it a lot of thought, and now she’s ready to stand by Liz through the trial. Except there won’t be a trial, because there was no murder, and the entire four-month storyline was a complete waste of time.

The story did answer a couple of long-time questions — why Liz didn’t leave the house for 18 years, and what happened to her husband — but unfortunately it answered them in a way that didn’t lead to any new story ideas. Thank goodness there’s a vampire living next door, or we’d have to jump start the whole show again.

So there are a couple scenes of Liz and Carolyn processing the whole experience, and then the sun sets on the last normal day that Collinsport will ever see. From this moment on, Dark Shadows is all about the spooks.

So let’s go over to the haunted house, where Jason is stirring up trouble for the last time.

He’s broken into the Old House to steal Barnabas’ chest of jewels. The box was lying  on the table in the drawing room when Jason came in through the window at the end of yesterday’s episode. That must have been a mistake, because in today’s reprise, the box is gone.

Jason looks around for the box for a longer time than you might expect. The scene goes on for so long that the “sneaking around” music cue ends, and they have to start it all over again. 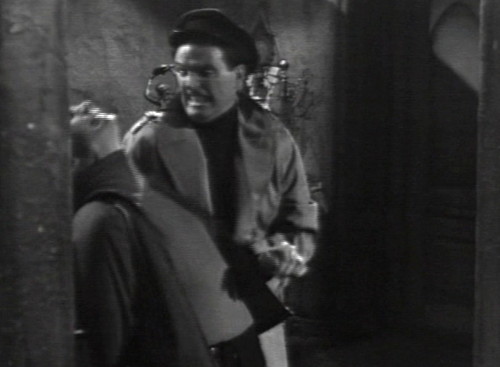 Willie finally notices that someone’s wandering around the house, and he tells Jason to leave. Jason responds in the usual way — smacking Willie, and twisting his arm until he admits that the jewels are in the basement.

Man, Willie gets smacked around more than anybody else on the show; he’s the Dark Shadows punching bag. 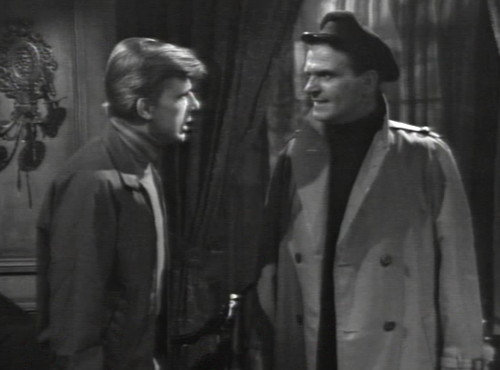 Desperate to save his old friend, Willie says that Jason can’t go downstairs — Barnabas is in the basement.

Jason:  Come on, Willie, give me credit for some little intelligence.

Willie:  He’s down there, you gotta believe me!

Jason:  I don’t care if he’s down there or not, I’m not leaving until I get what I came here for.

Willie:  I gotta tell ya. It’s the only way I can stop you. Barnabas — he isn’t alive.

Willie:  He can walk at night, but he’s dead!

Jason:  Have you lost what little brains you have left?

Willie:  You go down there, he’ll kill you, or worse!

Obviously, Jason ignores him. If people went around listening to warnings, you’d never get a monster movie started.

Although you’d imagine that even the most stubborn skeptic might pause for a moment if they walked downstairs and saw this kind of setup. Huge candlesticks, spider webs, and a coffin in the middle of the room.

I don’t know if I’d jump straight to “okay, so Barnabas isn’t alive,” but I’d probably be a little more careful than Jason is. He can’t understand why there’s a coffin in the house, so he decides that Willie must have hidden the chest of jewels there.

But guess what? He didn’t. So Jason opens the coffin, the vampire strangles him, and I never have to watch another blackmail episode ever again. Hooray!

There’s a film insert of Carolyn walking along the beach. When she enters Collinwood, she’s not wearing the same clothes that she was wearing in the film clip.

For the first time, the opening voiceover doesn’t begin with the words “My name is Victoria Winters.” Alexandra Moltke does the voiceover today, but starting tomorrow, it’ll get passed around to any of the actresses who are in the episode that day. It’s a subtle change, but it’s another milestone along the road to rebranding the show as Barnabas’ story.

The reprise of the previous day’s cliffhanger is almost always done as the first scene, before the opening titles. This episode is very unusual; it picks up the reprise in the middle of act 2.