“Cracking up your car and getting your life saved can be pretty exhausting, you know.”

Okay, this is a tough one. For one thing, it’s another Liz/Jason blackmail episode, and that storyline has been getting to me lately. But the really tough thing is that I have very clear memories of this episode, which it turns out are partly false.

The way I remember it, this episode is a turning point in Liz’s relationship with Carolyn. Liz takes a big step, Carolyn is touched, and they have an emotional breakthrough. Then there’s the climactic wedding sometime next week, and after that it’s all vampires and witches, and I don’t have to deal with this boring storyline anymore.

But I think someone must have come along and tampered with these episodes since the last time I watched them, because that’s not what happens, and the wedding is still three weeks away. Three weeks! 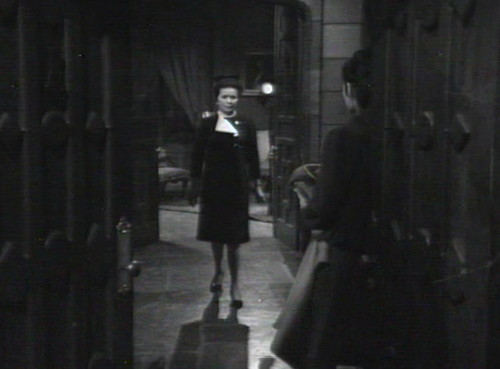 The beginning of the episode is just the way I remember it. Liz gets a call from Sheriff Patterson, who tells her that Carolyn was in a car accident. A woman saved her life, and Carolyn was rude about it. She’s being held at the police station until a relative comes and gets her.

By the way: Totally not fair having exciting things happen offstage. I would love to see Carolyn in full teen-rebel mode, smashing cars and giving people attitude.

Roger’s not available to pick Carolyn up, and Vicki suggests to Liz that she should go into town — leaving Collinwood for the first time in eighteen years — and prove to Carolyn that she really cares about her.

There’s a nice shot, with the camera shooting from the open front doors, showing Liz walking from the drawing room across the foyer and out into the outside world. They’re playing it like she’s been in a wheelchair, and this is the first time she’s walked in years. 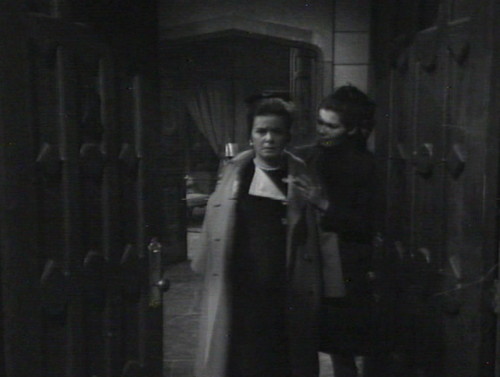 But Vicki puts a coat around Liz’s shoulders, which made me think — wait a second, if she hasn’t left the house in eighteen years, why would she have a coat hanging up right next to the front door? 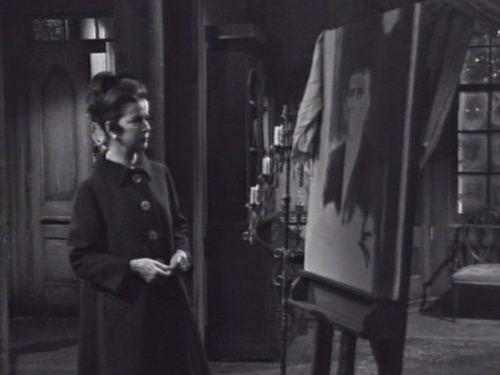 Then I remembered that we saw Liz outside a month ago. She went to the Old House to talk to Barnabas about Willie, and checked out the renovations. Yes, technically she was still on the Collins estate, but isn’t the idea that she stayed in Collinwood so that she could keep people from breaking into the basement and finding Paul’s body? What difference does it make if she walks to the Old House or drives down to the police station?

And looking back at that episode — that’s not even the same coat! Her whole shtick is that she hasn’t left Collinwood in eighteen years, but she has at least two coats. That’s the same number of coats that I have, and I go outside sometimes. 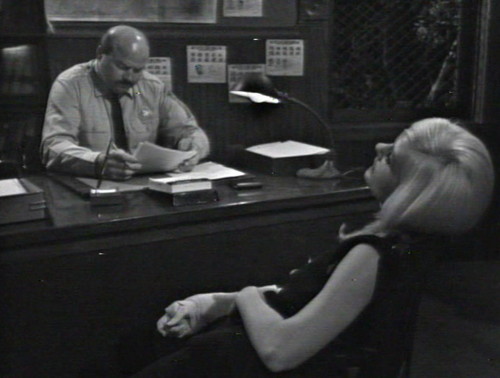 Anyway, over to the police station, where Carolyn is in the custody of Sheriff Patterson. This is actually the fun part of the episode, because Carolyn’s decided that today she’s the lead character in an educational short about juvenile delinquency.

She slumps down into a chair, and says, “I’m bored waiting. Why can’t you just lock me up for the night?” He just scowls at her and says that someone’s coming to get her.

Carolyn:  Can’t I at least go someplace and lie down for a while? Cracking up your car and getting your life saved can be pretty exhausting, you know.

Patterson:  There’s an empty cell back there, would you like that?

Carolyn:  Why not? Maybe that’s where I’ll wind up anyway.

Which is kind of hardcore. 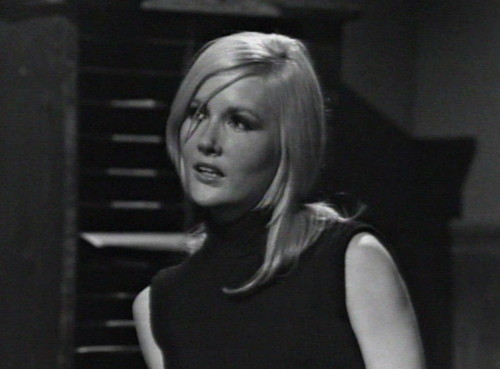 Patterson tries to give her a scolding, telling her how much he respects Liz, and how worried she was on the phone.

Carolyn doesn’t want to hear it.  She gets up, strikes a pose, and says, “Which way is my cell?” She’s such a badass all of a sudden. 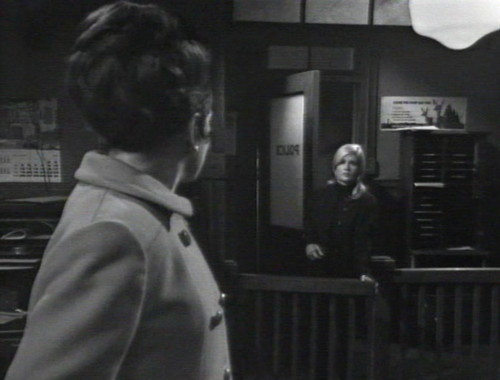 So here’s where the episode splits off from the way that I remember it.

In my version of this story, Carolyn is touched that her mother has left Collinwood to pick her up, and this starts to mend their broken relationship. They go home together, and then Carolyn drops the sarcasm and the beatnik boyfriend and we all get on with our lives. 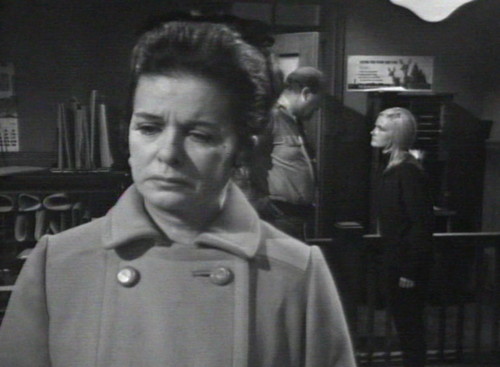 But instead, it all goes sour. Carolyn says that Liz is free to leave Collinwood now, because now she’s got Jason, and Carolyn’s father doesn’t matter anymore.

You know, I wonder if maybe putting every Dark Shadows episode in one big DVD collection was a dangerous idea. Maybe all of the bloopers and mistakes kind of leak out of the DVDs and collect at the bottom of the box, subtly screwing things up and creating new continuity errors. That would explain so many things. 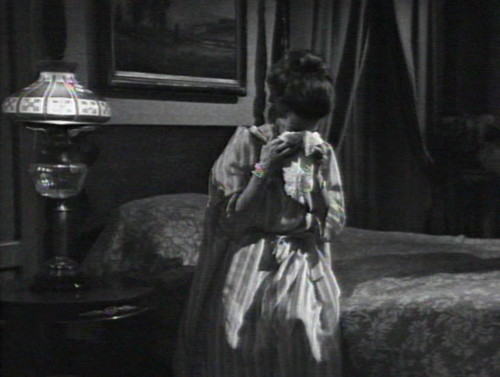 Because this storyline has clearly run its course — at least in my memory, if not in reality. We don’t need another three weeks of watching Liz agonize over her secrets. There’s a vampire and a ghost living right next door. Who knows what they might be up to while we’re not watching?

But somebody must be watching out for me, because there’s an extra surprise at the end of the episode. The final scene is in Liz’s bedroom, and look what’s there — the Ralston-Purina lamp! It’s migrated from the library all the way up to the master bedroom. That’s the third location for the lamp since I started this blog a couple months ago.

So at least one important thing happens in this episode. Oh, and Liz confesses to Vicki that she killed Paul. But who cares.

Tomorrow: The Secret of My Suspense.

Carolyn calls the sheriff “Mr. Patterson” instead of “Sheriff Patterson”.

There’s a rare example of editing in this episode. Editing videotape was difficult and expensive in 1967, so they taped the episodes as if they were live, going straight through and pausing for the commercial breaks.

But there’s a moment in this episode where they had a technical problem — the audio patch was accidentally pulled out during Liz’s scene with Vicki in the drawing room. They had to reshoot part of the scene, and edit the new scene into the show.

Look closely at Vicki’s hair when she says, “Don’t call Roger.” The camera cuts to Liz, who says, “Why not? I can’t let her stay in jail.” When they cut back to Vicki for the next line, her hair falls over her shoulder on the left side, instead of straight back. That’s the moment where the edit starts.

About 50 seconds later, they go back to the original tape when Liz turns toward the front door and says, “Down the road… out the gate.” You can hear a little hiccup in the music cue. (Thanks to the Dark Shadows Wiki for spotting this awesome little bit of trivia!)

Tomorrow: The Secret of My Suspense. 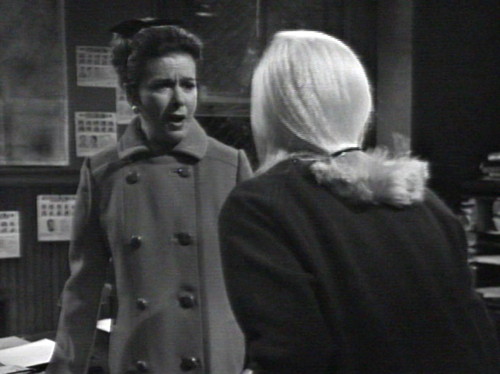