“Well, at least you’re not accusing us of outright madness.”

And now I shall show you what hasn’t been seen by human eyes for more than one hundred and thirty years.

She’s the same woman I saw in my dream.

Stop talking for a minute, I’m trying to think something out. 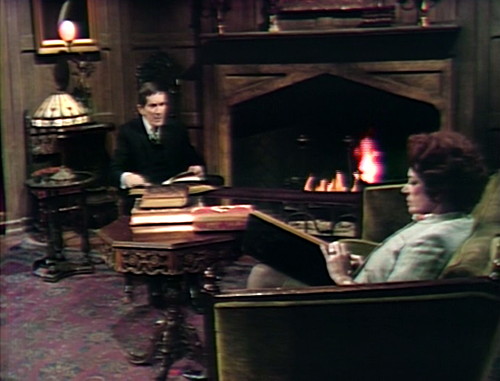 Then the fact that so very little has been written about them would indicate that something unusual happened to them.

The portrait is secure, and so am I.

You know, there’s always a little mysterious, and, well, something a little frightening about, well, the moon, going totally dark when the earth’s shadow crosses over it.

Where is the room? The portrait of Abner Collins didn’t find it for us. 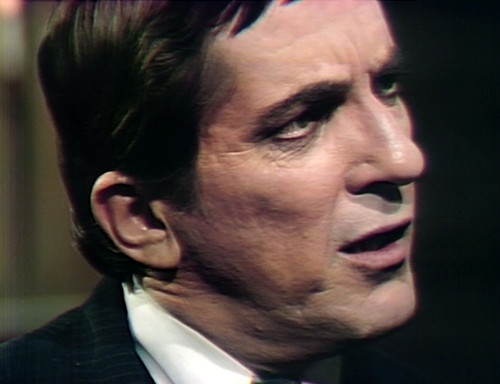 Elizabeth’s had her chart drawn up by an astrologist?

It states that Collinwood is to come under a siege of unrelieved tranquility.

I’ve got to tell her that there’s danger for the entire house!

Whatever happens isn’t necessarily going to happen to the children, it could happen to anyone!

“When the music ends, the play begins.” I wish it would make more sense!

Monday: Say Yes to the Dress.

When Barnabas looks out the drawing room window at the moon, you can get a glimpse of one of the studio lights.

After Julia leaves David’s room, someone in the studio coughs.

Dark Shadows Wiki points out that the final picture used for the lunar eclipse is actually from a solar eclipse. Lunar eclipses don’t have a “ring”.

Don Briscoe (who played werewolf Chris Jennings) was fired from Dark Shadows back in April, while Barnabas was in Parallel Time. His behavior had become erratic, based on some combination of drug use and mental health problems.

Now that they’ve returned to the present-day storyline, Chris is gone, taking his sister Amy (Denise Nickerson) and girlfriend Sabrina (Lisa Richards) with him. Richards last appeared in June, and Nickerson’s last episode was in July. Alex Stevens, the stunt man who played Chris as the werewolf, growled for the last time back in March.

This episode is the only time the characters are mentioned after Parallel Time; Quentin looks at the full moon, and says, “I hated to see him and Sabrina and Amy go away together, like they did. I can’t help thinking about what may be happening to them, especially on a night like this.” The werewolf storyline, which ran on and off from November 1968 to March 1970, is never resolved on the show.

Big Finish has continued the story in their line of Dark Shadows audio plays. In 2013’s The Enemy Within, Sabrina reveals the tragic way that her marriage to Chris ended, and she continues to battle against the werewolf curse in 2014’s Carriage of the Damned. Amy returns in 2013’s The Lucifer Gambit, and she plays an important role in several following audiobooks, leading up to one of the major story threads in the 2015 Bloodlust miniseries. If you want to follow this story, Dark Shadows Every Day readers can get a 25% discount on Big Finish’s Dark Shadows audiobooks range, by using the code DSED25OFF when you check out. This offer is valid until Dec 31, 2017.

Monday: Say Yes to the Dress.