“A shadow, yes — a shadow that fell over all of our lives!”

Barnabas and Julia have been thrust into the far-off space year of 1995, which means they’ve already missed three seasons of Melrose Place and they’re not going to understand what anybody at the office is talking about. They’d better stay away from watercoolers altogether; you can’t be too careful.

But the time-tossed twosome have other things on their minds, like for example that their house got destroyed twenty-five years ago, killing most of their friends and driving the survivors out of their everloving minds. So Barnabas and Julia are snooping around, trying to find out what caused the catastrophe. I’d suggest taking a close look at Dr. Kimberley Shaw, who’s recently developed an interest in detonating apartment complexes, but they wouldn’t have any idea what I mean. You see what happens when you don’t watch Melrose Place? Let this be a lesson. 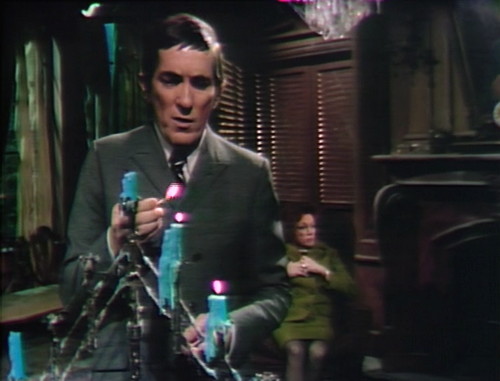 A heavy stone bust was perched awkwardly on the bannister in the Collinwood foyer, just waiting for a time-hopping medico to step on the spot marked X. There was a bullseye painted on the floor and a sign that said “Free Bird Seed,” but luckily, Julia Hoffman is a trickster herself, and she stepped out of the way just in time.

Fleeing from the house, Barnabas and Julia took a look behind them and saw a sneering stranger, glaring at them from the window, an illuminated exhibit of unfriendly ectoplasm indicating, in no uncertain terms, that he has more busts if Julia feels like coming back and trying for best two out of three.

So they’ve escaped unharmed, but it was a jolting experience, and it’s going to take a minute for Julia to regain her composure. Barnabas, naturally, is not helping a bit.

“Who could it have been at the window?” he wonders. “Was it the same man who tried to kill you?” He sparks up a couple candles. “There was something strange about his appearance,” he muses. “He was wearing clothes from another century! A ghost, from the past!”

Julia keeps thinking about the look on the specter’s face. “I can’t get it out of my mind!” she wails.

Barnabas shakes his head. “His arrogance!”

Now, these people have seen ghosts before, plenty of times, and it shouldn’t be shaking them up like this. But that’s the point of this particular moment — they need to find a way to indicate that this ghost is scarier than any other ghost they’ve ever seen.

Because this isn’t the first time we’ve seen a handsome, silent, sneering ghost at Collinwood; he’s currently one of Barnabas and Julia’s closest friends, and he has his own bubblegum cards. The show’s taking another turn at the same screw that they turned only a year and a half ago, and it’s not like they can slip it by without anyone noticing. The audience has not forgotten Quentin Collins.

So if they’re hoping to put this over, they need to up the tension significantly, which means uncorking the E-word.

“It was the very essence of evil!” Julia cries, getting up from her chair. “I felt evil all around me. I was trapped by it!” She clutches her coat. “It made me aware of something deep inside me that I don’t even understand — as though, with that one look, he could concentrate every grain of evil I have in my nature! Make it grow, and grow…”

She turns to Barnabas. “You didn’t feel it?”

“Nope,” he shrugs. “I think the evil in my nature is pretty much as grown as it’s ever going to get.”

Meanwhile, over at Grey Gardens, Carolyn is brushing her hair. This is the Carolyn of 1995, who survived the Fall of Collinwood and then sat around for twenty-five years, getting older and battier. She’s currently inventing new childhood memories for herself.

“When I was a young girl, you used to brush it for me, remember?” she says to Mrs. Johnson, who doesn’t. I’ve got an episode guide in front of me that says that Mrs. Johnson started working at Collinwood in August 1966, when Carolyn was twenty years old. But this is what the Collins family does in their leisure time, they rewrite their history from the ground up. Twenty-five years later, there’s even more history to rewrite, and fewer Collinses to do it, so it’s no wonder Carolyn’s pulling a double shift.

Slipping into a fugue state, Carolyn fantasizes about a family reunion. Everyone’s coming back, she says: “My mother, and Quentin, and Uncle Roger…”

Mrs. Johnson tries to talk sense to her. “Carolyn, they’re not coming home…”

“Oh, but they are! And when they do, the house must be ready for them!”

Mrs. Johnson insists they’re never coming back, but Carolyn’s had decades to build up her defense mechanisms. “Don’t say that!” she snaps, but then she smiles, and settles back into her dream world. “Especially when it isn’t true.”

She starts flipping through a photo album, giggling, “Oh, we must make plans! We’ll celebrate with a picnic at the gazebo, and it’ll be a beautiful warm day, and David and I will go sailing with Quentin.” This is the second time this week that Carolyn’s talked about a picnic; she’s really got her heart set on it.

Then she takes a photo out of the album, and it’s Quentin and Maggie, at a picnic. Either this is the event that Carolyn’s obsessed with, or the Collinses of 1970 must have been picnic-mad. I don’t know where they think they’re going to spread a blanket out; they’re on the woods set, which is about sixteen feet square. It’s going to be a tight squeeze, they won’t even have room for ants.

Mrs. Johnson grabs the photo from Carolyn’s hands. “Where did you get this?” she demands. “That’s the first time that we saw him!”

“You don’t know what you’re talking about,” Carolyn says, and I agree with her.

“There!” says Mrs. Johnson, pointing at nothing in particular. “There he is!”

Carolyn disagrees. “That’s only a shadow.”

“A shadow, yes! A shadow that fell over all of our lives!”

It’s a great line, and a nice spooky moment, but honestly, I don’t know what she’s pointing at. I’ve looked at that picture, and I don’t see anything but the picture. That’s how badass this new ghost is, he appears in shadows that aren’t even there.

But they have to hype the ghost, because they keep undercutting the other obvious source of tension. Later on, Mrs. Johnson tries to tell Barnabas and Julia to stop poking at old wounds.

Barnabas:  We simply must know what happened — who this spirit is, and how it got control of Collinwood!

Mrs. Johnson:  Why? What good will it do? You can’t prevent it, why add the burden of those sorrows?

Julia:  We were just trying to tell Carolyn that we can prevent it.

Mrs. Johnson:  You can prevent it? You’re as mad as she is!

Barnabas:  Mrs. Johnson, look at us very carefully. Now, you yourself noticed that we hadn’t changed since we disappeared twenty-five years ago. Some terrible disturbance in time brought us here!

Julia:  And when we get back to 1970, we can stop everything that’s happening here!

So that’s an astonishing thing to say, because the characters have exactly zero reasons to believe that they can get back to their own decade. They don’t have a time machine, or even a stack of I Ching wands. That terrible disturbance in time was a one-way trip, a freak side effect of the Parallel Time room spitting them back into our universe as it crashed and burned.

And the world that they find themselves in is obviously a timeline where they didn’t get back. Everybody keeps telling them that. But here they are, unbothered.

This only makes sense if Barnabas and Julia know that they’re the main characters, and understand what kind of story they’re in. Dark Shadows is now a boomerang time travel show, where the characters take a trip to another decade and then return to home base. So even when there’s an exception, like the one they’re currently standing in, they’re still convinced that the pattern will hold, and they’re right.

It’s a strange thing for the audience, seeing the characters completely undaunted by what ought to be a horrifying predicament, like they’ve personally decided what part of this experience is suspenseful and what isn’t. Right now, it works, because traveling to 1995 is such a delicious surprise. But the show is dancing on a paper’s-edge; if they’re really taking this format for granted, then they need to come up with a new way to surprise us, and I’m not sure they have one.

So this ghost better be something special. It’s not enough to be Quentin Junior, scaring everyone into abandoning ship and taking up residence at the next-door neighbor’s. This ghost needs to be a ruthless killer like we’ve never seen before, a world-breaker.

“It all began when the days were so beautiful, you couldn’t help but be happy,” Mrs. Johnson explains. “There was a spirit of joy at Collinwood; there was a feeling that hadn’t been there in a long time. There was so much love among all of us at that time… until…”

That’s key to the story, then, that Collinwood was going through a mythical Camelot stage like we’ve never experienced. Collinwood has never been a happy place; it’s gloomy and half-deserted, filled with terrible secrets and constantly under siege. But now they have to reframe it as a stately pleasure-dome, just one long string of summertime picnics. 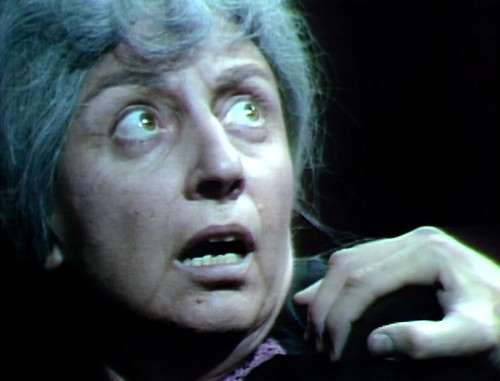 And then Mrs. Johnson runs out into the woods, where the Big Bad finds her, and Camelot topples for good. Carolyn finds her, sitting up against a tree, her face frozen in horror.

“No, please,” Carolyn chokes. “You’ve always been so good to me… don’t hurt me now! Please, reach out and take my hand… Mrs. Johnson? Please take me, and hold me like you did when I was a little girl… help me! Help me!” 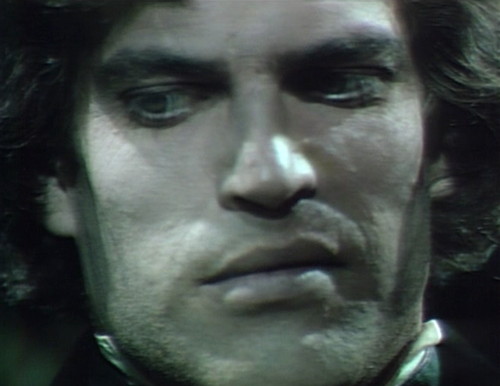 It’s heartbreaking, and it needs to be. This Big Bad has to be the Big Worst we’ve ever seen. The future of Collinwood depends on it.

At the beginning of act 1, there’s mist blowing through the Old House.

Barnabas lights a couple of candles, shakes out the match and then just drops it on the floor. Is that a thing that they do? I don’t think I’ve ever noticed it before, but they’ve just done it in two episodes in a row. It’s fantastic.

Julia’s mic cuts out a couple times in act 1, and we miss some fragments of her monologue about evil.

Barnabas tells Julia, “Apparently, my powers protect me, or perhaps because I’m not truly human, I’m not immune — I’m immune to those, that particular weakness.”

When Carolyn turns from the photo album to chide Mrs. Johnson, the housekeeper is standing in Carolyn’s light.

When Mrs. Johnson starts telling her story to Barnabas and Julia, there are some bangs and scrapes from the studio.

When Barnabas and Julia duck into the Collinwood drawing room, Barnabas knocks over a glass, which breaks.

The playroom music plays for a few seconds as Carolyn approaches the playroom, and then stops. 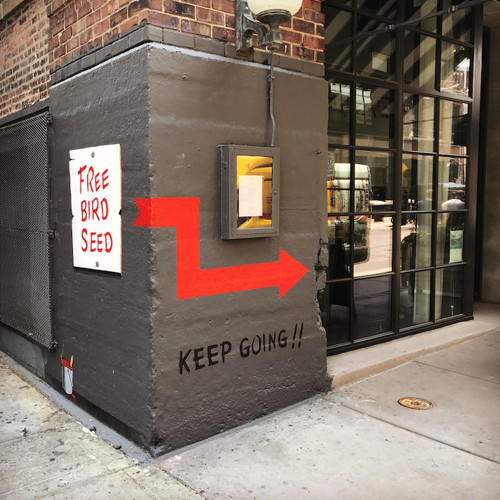