“Will tomorrow tell us any more than today?”

Every once in a while, I have to take an unplanned break from writing this blog — usually for a conference, or a seance, or I have other things on my mind — and when I come back, it’s always the same. The blog is a shambles, all caved-in and overgrown with vines and creepers. Everything’s dusty, the commenters are ravenous and desperate, and you don’t even want to know what happens to the Twitter feed.

Suddenly, it’s the distant future — or at least, a lot more distant than I wanted it to be — and if I could figure out what happened, maybe I could go back in time to make it right. I mean, I probably can’t, but you never know. 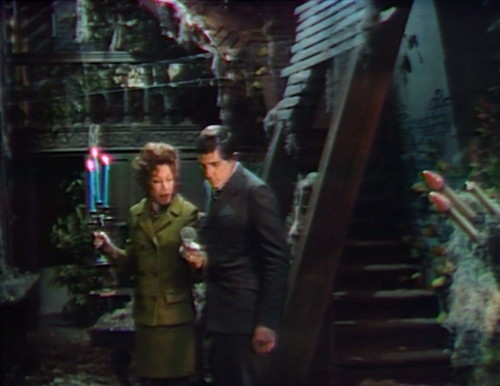 And here’s eccentric millionaire Barnabas Collins and the mythopoetic Doctor Julia Hoffman, in exactly the same situation. They took a quick sabbatical to a parallel dimension, and now it’s 1995, and they’ve missed all the good seasons of Seinfeld.

It’s one of the great surprises of Dark Shadows — a flashforward to twenty-five years in the future, where Barnabas and Julia are confronted with the consequences of an epoch-ending event that they’ve never even heard of. They were so busy solving parallel problems that they forgot all about their own band of time, and now it’s ruined and they don’t know why.

The only suspect I can think of is the Y2K bug. I know it’s five years early, but maybe that’s how cunning the Y2K bug actually is.

Acting on a hot tip from the housekeeper, the Junior Detectives head to a cottage by the sea, and oh my god, will you look at what they’ve done to Carolyn.

She’s traveled through time as well, but she’s done it the slow way, at the customary pace of 1 second per second, collecting a history’s worth of worries and grief, and piling it all up on her face.

“You got away, didn’t you?” croaks the aged ingenue. “And now you’ve come back. Or — are you spirits?”

“Of course we aren’t, Carolyn,” Julia smiles, as if this is going to turn out even remotely okay. “Touch me!” And then she reaches out her hand, and Carolyn shudders, and pulls away.

“You look the same!” she observes. “You shouldn’t look the same.” Then she charges across the room, shouting, “Why have you come here? What are you doing in my house?”

She’s gone mad, of course, like a character from Lovecraft after a night on the town with the Elder Things. The catastrophe that trashed Collinwood has taken everything from her but an assortment of scavenged knickknacks, and a suite of bad memories too horrible to bear.

Her little cousin David is dead, and something terrible has happened to her mother, and Uncle Roger. Quentin’s missing, and Maggie’s gone, and here’s Barnabas and Julia, twenty-five years too late. They went off on some irrelevant side mission, saving the wrong family, and everything fell apart. And Carolyn has gone mad.

They ask her questions, and she adopts every possible position. Nothing happened, she insists, and the others will come back soon. Barnabas says that they’ve seen David’s grave, and she starts to giggle.

Carolyn stops. “1970 was so long ago,” she moans, gazing into the middle distance, and you can hear all those desolate years she’s spent living in this shack by the beach, decorated with memorabilia from a life she doesn’t want to remember.

Every once in a while, the Dark Shadows writers ask themselves, who’s going to be the heart of this storyline? What character is going to grab the audience by the feelings, and make them care about what’s going on? And the answer is Carolyn. She was the heart of the Jason McGuire blackmail story, and the Adam story, and the werewolf story, and the Leviathan story, and — for a few precious episodes — the Parallel Time story. Carolyn is the correct answer to that question.

And here she is, the girl who danced at the Blue Whale, transformed into a lonely, bitter hag. She swings from one emotion to another, babbling out disconnected sentences with vague pronouns, like crazy people always do on TV.

“I love secrets, don’t you?” she witters, like an echo of late-stage Parallel Carolyn, drunk and reckless. “I have learned to love secrets. Yes.”

Julia tries again. “Carolyn,” she says, “tell us one of your secrets, just so we can understand what’s happened. We want so much to. We want to see your mother.”

“And the others…” Julia prompts.

Carolyn yelps with pleasure. “Wouldn’t that be fun? We could have a picnic on the beach, and play games…” And then the clouds pass over her face. “But, what games would we play? We’re too old for games.”

“Yes, we are, Carolyn,” Barnabas says. “But you’re still playing a game.”

It’s a great scene, dropping little bombs with each line of dialogue. This is what Sam Hall was doing, while he wasn’t paying attention to the final weeks of Parallel Time. It was worth it, just for this.

“Now, why do you call yourself Fredericks?” Barnabas asks.

Carolyn frowns. “I can call myself anything I want!”

Julia says, “Well, why don’t you call yourself Collins?” 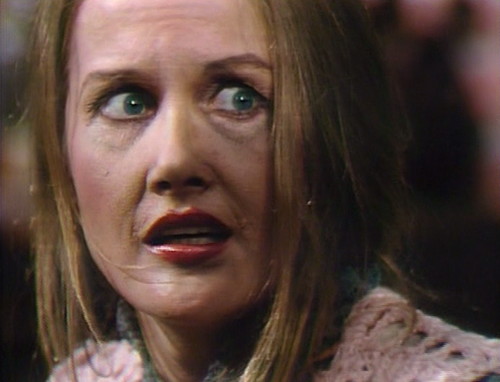 And then we see just how haunted Carolyn is.

She says it just like that, with stress on that ancient, unheralded third person pronoun, as if she’s been reading Dark Shadows Every Day, and all of my metatextual conspiracy theories are true.

“Your love made you follow me!” the Second Vicki said to her vanishing husband. “Your love brought you here! Well, my love will keep you here!” She held fast to the man she met during her stay in the 18th century.

“Commit yourself to this life, to this time! Say you will, Jeff — and They will let you stay!”

That’s the first time we noticed They, the dark and shadowy organization that pulls the strings from behind the wobbly sets. They is all mixed up with time travel somehow, brought into being by Vicki’s unquenchable need to create paradoxes, and the organization appears to be either patching up the tattered space-time continuum, or destroying it once and for all. Or both.

They tugged Vicki back through time during that senseless seance, and pretended it was the ghost girl. They pulled Jeff back to the 18th century during his honeymoon. They swapped at least three and possibly four babies between the 20th century Stoddards, the 18th century Wicks and the 19th century Trasks, dropping kids off at impossible orphanages and spawning feedforward loops that knocked Burke all the way out of his plane as he flew over the Brazilian jungle.

They is powerful, and They is ruthless, and if you want to understand why Barnabas and Julia are here in 1995, then I’m pretty sure the answer is They.

This is a pivotal moment for They, because this week is the first time that Barnabas and Julia have explicitly been sent on an Adventure.

Dark Shadows doesn’t really do Adventures, where two lead characters travel to some faraway location in spacetime, wheezing and groaning, to diagnose a problem and improvise a solution. It’s not a thing that soap operas are designed to do.

But here they are, the doctor and her companion, exploring the deserted Nerva Beacon, piecing the clues together so they can figure out what’s going on, and how they can help. These two weeks are a ten-part fan-fiction crossover that Young Danny might have dreamed up, after watching my two favorite shows on New Jersey Network — Dark Shadows, and Doctor Who.

Someone has sent Barnabas and Julia on a mission to save Collinwood and restore the timeline, and I’m sorry, but I think it’s the Time Lords.

There, I’ve said it. They is the Time Lords.

Maybe. I mean, you never know with They. There’s another hundred and eighty-three episodes to go, and it’s possible that They has another surprise up the sleeve of its Prydonian robe. But I don’t know anyone else who timescoops doctors, and deposits them at historically disputed warzones. 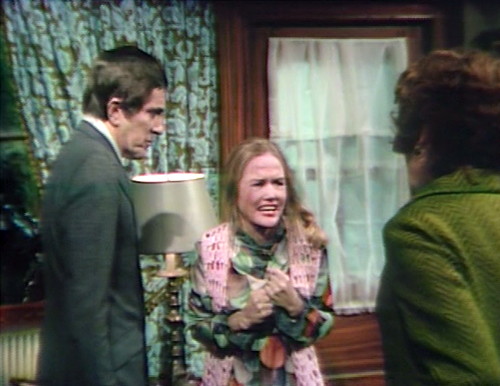 “Get out!” Carolyn shrieks, finally fed up with this whole ordeal. “Get out of my house! You weren’t there! Go back to wherever you come from! GET OUT!”

She’s right, of course. This whole disaster happened because Barnabas and Julia were re-routed from one fictional universe to another, stranded by They in a show they don’t understand. They have to escape, to slip silently back through the New Jersey Network schedule, and return to their own show. But how?

Joshua and Naomi’s nameplates are switched in the Collins mausoleum.

When Julia closes the mausoleum gate on her way out, the boom mic hovers behind her.

When Carolyn asks Julia if her mother would be buried here in the cemetery, someone walks in front of the camera.

There’s a tape edit when Julia is talking to the records clerk.

When Barnabas opens the mausoleum door to exit the secret room, you can see a studio light.

The first shot at Victor’s house is a closeup of a lamp; you can see studio lights reflected in the glass.

The Records Clerk is played by Ronald Dawson. He also appeared in December 1969 as Professor Henry Osmund, Stokes’ friend who restored the portrait of Amanda Harris. The credits call him “Records Clerk”, but The Dark Shadows Almanac lists him as “Ed, the Records Clerk”.

Victor Flagler is played by Cliff Cudney, who appeared in three episodes in March 1970 as the zombie John Hart, one of Jeb’s army of the walking dead. Dark Shadows is Cudney’s first screen role, and he goes on to have a long and successful career in stunts, beginning with The French Connection in 1971. He worked on a lot of horror movies, including Friday the 13th Part 2, Alone in the Dark and Scream for Help,  as well as comedies, including Night Shift, Unfaithfully Yours and Boogie Nights. He was also a stunt driver for 1984’s The Muppets Take Manhattan, so obviously he is cool, and we like him.

If Dark Shadows really has become Doctor Who and it’s July 1995, then that puts us somewhere in the vicinity of Sky Pirates! It occurs to me that if I didn’t already have a theme for the 1995 blog post titles, I could have used ’95 New Adventures books and it would have fit perfectly. Think about it: Sanctuary, Infinite Requiem, Human Nature, Original Sin, Head Games, The Also People… it’s like they were writing Dark Shadows Every Day. On the other hand, what would I do with Zamper? So maybe it’s for the best. 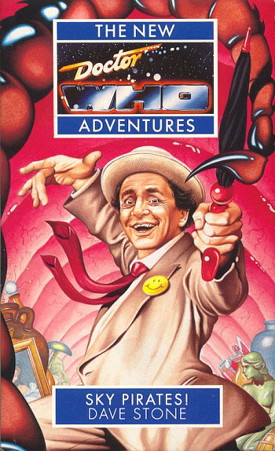