“Blood in this room. Why? First the piano playing, then downstairs, the picture of Bruno in the drawer. Blood there, too. Then Dameon in the chair. And here again, blood. But why?”

We’ve been spending the last several weeks settling into this new Parallel Time storyline, which takes place in a separate universe where everything is the same, except that people have made different choices, including the choice of whether to make their soap opera make sense or not.

They’ve boxed up the vampire, the crossover character who is technically the only person in this storyline from ABC-TV’s Dark Shadows, and they’ve put him into cold storage while the actor scurries upstate to appear in the Dark Shadows movie, leaving us with a handful of pinch-hitters from the other side of the sun.

The A-story these days is about Angelique — what she was, how she died, and whether she’s come back as a ghost, or a twin sister, or not at all. There’s been a decent amount of forward progress in that story lately — so much, in fact, that yesterday they slipped some important story information in the middle of a conversation about something else, and then acted like they didn’t even notice. But there’s still quite a bit of time to kill, and they need to slow things down a bit.

So today, they unveil the exciting plot twist that nobody saw coming: Dameon Edwards is back!

Okay, clearly you didn’t hear me. I said, Dameon Edwards is back!!

Fine, have it your way. I don’t know who he is, either. This is a secret that Dark Shadows has decided not to share with the likes of us. But here he is, anyway, big as life, just sitting there on a chair in the middle of the drawing room, taking up real estate.

He’s come over at kind of a difficult time, even by Collinwood standards. In this parallel reality that we appear to be stuck with, Quentin Collins was married to Angelique, all the way up until they had a seance six months ago, where Quentin strangled her to death. For some reason, this didn’t actually kill her, because now they’re saying there was someone else next to Angelique who really killed her, and that’s how murder mysteries work, here in Parallel Time. I told you, this is a universe where everyone has made different choices. Some of those choices are better than others.

Quentin’s currently in the middle of being haunted by somebody, who’s using all the standard ghost effects. The lights go out, the windows blow open, somebody feels a chill. Usually, this package comes with a mysterious little girl throwing a ball and singing “London Bridge”, but Quentin has opted for the gold card deluxe package, which includes a whole guy.

So Quentin turns around, and notices this sudden population explosion taking place to his immediate rear.

But then Quentin realizes that Dameon’s not moving, or speaking, or reacting in any way. The visitor is just sitting there, staring vacantly into the uncanny valley. Quentin reaches out to touch him, and Dameon just sort of slips sideways onto the floor. A dead man, all dressed up in Creamsicle drag, which is exactly the kind of thing that Quentin doesn’t need right now.

Horrified, Quentin rushes to the phone, and asks the operator to connect him with the hospital… 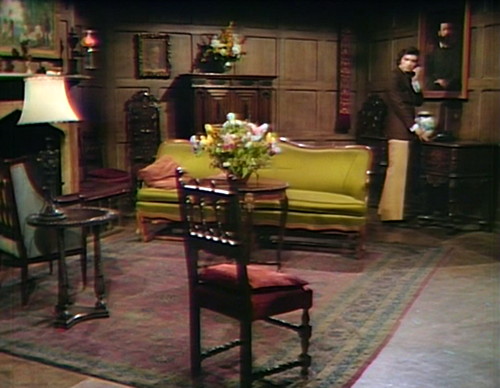 … and then he turns around, and Dameon is gone. Apparently, he just stopped by to fall over. Dameon isn’t very good at visiting people.

This is a murder mystery, apparently, which is a thing that you’d figure you only need one of at a time. It’s possible that the same person killed both Angelique and Dameon, which is totally acceptable under the rules of murder mysteries, but it doesn’t really feel that way.

They’ve been talking about Angelique for weeks now, with a special emphasis on her post-death activities. The question of who killed her is actually secondary to the main mystery, which is whether she has the power to return from the grave. Finding out how she died is only important if it provides a clue to the main mystery, which is why they haven’t called the police or done anything sensible over the last six months.

So the question of who killed Dameon, when we don’t know who Dameon is or what he has to do with anything, comes out of pretty much left field. 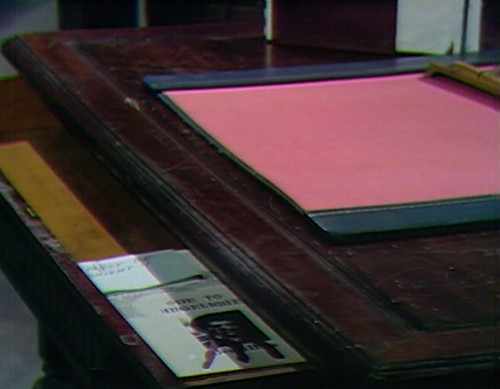 So far, we’ve seen the following supernatural happenings in Parallel Time: Daniel looked at his dead mother’s portrait and asked her to sing to him, and then he heard a voice humming a tune. They had a seance to re-enact their previous seance, and Sabrina was possessed by a ghost who said murder, murder, murder. Maggie got a note in Angelique’s handwriting, telling her to leave the house. This week, we’ve seen a self-playing piano, a self-opening drawer, and sheet music with blood on it. A ghost choked Bruno when he was talking to a travel agency, and crazy Aunt Hannah also choked, when she said she might be able to exorcise the spirit. A handkerchief burst into flames, and there was a series of inconclusive tarot readings. And now this.

So there’s at least two ghosts in play, as far as I can figure — one who wants to reveal the truth about Angelique’s killer, and another who wants to conceal it. I think. The Sabrina possession was clearly in favor of getting things out in the open. But some of these were stopping people from finding out if Alexis is Angelique — the ghost choking Bruno, the handkerchief catching on fire — and I’m not sure who would benefit from that, except for Alexis if she was really Angelique, and I’m pretty sure she isn’t.

Of course, if we’re going to add another ghost-infused murder mystery on top of the one that we already have, then we’re going to need to get some suspects up in here. Most of the cast has toddled off to Tarrytown to film House of Dark Shadows, so unless we want to blame the same four people who we’ve already blamed for Angelique’s murder all over again, we’re going to have to bring in some new talent.

Enter Trask the butler, always a helpful character type to have around when there’s a murderer loose in a mansion. Jerry Lacy does make an appearance in House of Dark Shadows, playing the reverend at Carolyn’s funeral, but he’s only in the funeral scene, and they filmed that last week. Now he’s back at ABC Studio 16, looking shifty and trying to change the subject.

“I know no more than anyone else, sir,” he says, “which means that I know nothing.” And then he grips a glass so hard that it shatters in his hand. I love all Trasks.

Still, I don’t know what to make of these awkwardly interlocking mysteries, and adding more clues doesn’t seem to help. Quentin goes upstairs to Angelique’s room and finds Dameon’s ghost there, all moody and orange and made out of Chromakey, and then the ghost vanishes, leaving a spattering of blood on the floor, right in front of the fireplace. 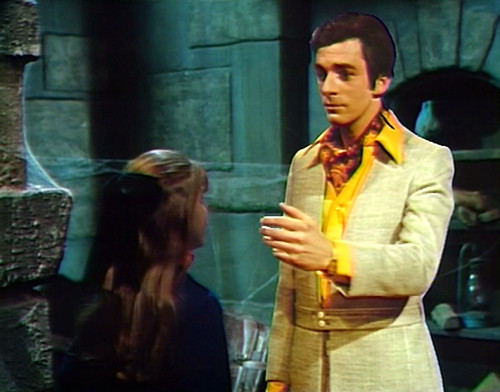 We close today with another Chromakey spectacular, as the ghost of Dameon leads young Amy down to a room in what I guess is supposed to be the cellar. I’m not sure why he chooses Amy to beckon, given that he’s also appeared to Quentin twice. Amy certainly isn’t a very good recipient for the message that Dameon is trying to get across, because all she does is scream, and she has no plans to investigate this any further.

So this is probably a clue, although what it’s a clue to I’m not entirely sure. Who knows what clues mean? Sometimes there are just naturally-occurring clues that appear spontaneously around the house. Don’t take any notice, you’ll only encourage them.

Quentin asks Trask, “What are you doing here? When did you get here?”

In yesterday’s episode, Alexis said to Quentin that she didn’t want to leave her flower cuttings in the drawing room for Hoffman to clean up. In today’s episode — which takes place on the same day — Quentin tells Trask that Hoffman’s gone away for a while, and it’s implied that she didn’t get a message that Trask left for her several days ago.

During the closing credits, a shadow passes across the floor in the hall.

The closing credits stop before the Dan Curtis Productions logo reaches the middle of the screen.

Dameon Edwards is played by Jered Holmes; this is his only role on Dark Shadows. As is typical for Dark Shadows actors, Holmes was involved with New York theater. He appeared on Broadway in two musicals — That’s Entertainment in 1972, and 42nd Street in the 1980s. On TV, he appeared in the TV-movie adaptation of Woman of the Year in 1984, and he spent a year on As the World Turns. There’s a curious New York Times article from 1982 about Holmes shopping at thrift stores, which I guess you have to write about something. 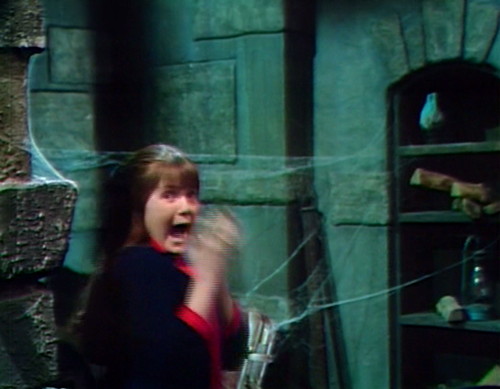