“Remember, the dead can return in many ways!”

Here’s Aunt Hannah, who we’ve never heard of before, and that’s a shame, because she’s crazy. She uses a sharp pencil to draw a rectangle on an astrology chart, and then she taps her overly bejeweled fingers, tap tap tap tap, like she’s waiting for the celestial bodies to bring her a corned beef sandwich. She’s sitting in a dark room, wearing dark makeup, and pretending that she knows what she’s talking about.

Bruno asks what she sees, and Aunt Hannah replies, “Stars in opposition, the heavens in turmoil… signs in disarray.” She shakes a finger at him. “You must beware,” she says. “Some alien force is at work against you.” She doesn’t sound super worked up about it. It’s not really a warning, more a general observation, like, if you were wondering what was at work against you? It’s an alien force. So keep that in mind.

Bruno leans forward. “Can this alien force be of the spiritual world?” he asks.

She leans back. “I can only conjecture,” she allows, “but my answer is: yes.” That’s a pretty cut and dried conjecture.

He presses her, and she says, “You want to know if it’s the spirit of my niece, Angelique, don’t you?” He does. She smiles. “You know as well as I do that the charts contain nothing of that meaning.”

In other words, the heavens have gone out of their way to put themselves in turmoil, just to make Bruno mildly suspicious, which he already was. That’s the thing that I don’t understand about astrology; it seems to be a lot of work on the celestial bodies’ part, for very thin results.

I mean, you’d think if astrology and tarot cards really worked, then the people who believed in them would be running the entire world by now, and yet they don’t. Weird, right? 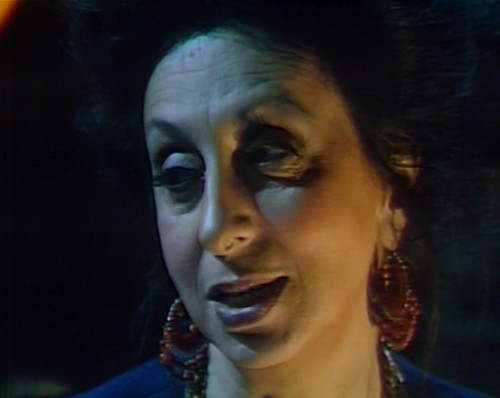 In other news, get a load of Angelique’s aunt. She’s one of those Spanish-Jewish gypsy types that you see so often at family reunions with their blue-eyed, blonde nieces. I know, it’s the twenty-first century and I’m not supposed to see skin color or hear New York accents, but I still do. This is an unlikely aunt.

Although, honestly, the most unlikely thing about the entire scenario is that Aunt Hannah confirms that there really is such a person as Angelique’s twin sister Alexis, which pretty much knocks all the stuffing out of the “is she Angelique or Alexis” mystery, as far as I’m concerned.

Angelique Collins is dead, you see. Six months ago, she died of a stroke at a seance, just to spice up a dull dinner party. But now she’s come back to Collinwood, apparently, in the guise of a twin sister that nobody’s ever heard of, so everyone who loved and hated and feared Angelique is on tenterhooks, desperate to discover whether this is really the dearly departed.

Now, obviously, the solution to this mystery involves the shocking fact that Angelique was an only child!!, which gives you a nice strong reveal, followed by a dramatic close-up of the woman in question, at which point we can all move on with our lives. That’s how they’ve been playing it so far, at least; everyone’s been acting like the concept of identical twins is entirely new to them.

So when Aunt Hannah says, “Alexis and Angelique are my nieces, don’t you suppose I can tell them apart?” then the obvious answer is yes, of course you can, and never mind, I guess it doesn’t really matter.

Although, you know what? A couple weeks ago, Carolyn said that Angelique wanted to marry Quentin since she was a little girl, growing up in Collinsport. So how is it possible that Quentin and Hoffman and everybody else have never met Alexis before? I can’t believe it’s taken me all this time to think of that. We might have to send this storyline back for rewrites.

Because this is where the idea starts to feel kind of thin, like they’ve taken a two-week story and they’re stretching it to four weeks. It’s been long enough that if this really is Angelique, then she’s in pretty deep cover, cause she’s not doing anything Angeliquey. She’s not cursing or poisoning or choking people, or playing any of her other favorite party games. She’s just hanging around the house, acting like a perfectly nice lady who lives here now.

So in order to keep the tension up, everybody around her has to act super suspicious, watching her every move with the intensity of a TMZ reporter on their first day of work. In today’s episode, she tucks her nephew Daniel into bed, and hums a little tune while she fluffs up his pillow. Here’s Quentin’s reaction. 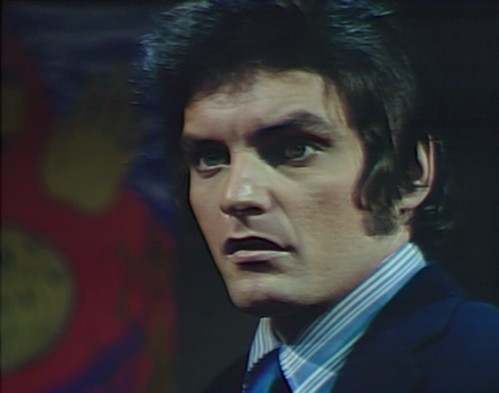 You see? Open-mouthed amazement. That’s for humming. And Daniel responds the same way.

Because when Angelique was alive, and tucked Daniel in, she would hum exactly that song! So consider that admitted into evidence.

And then: the flowers! Alexis is sitting in the drawing room, making conversation as she prunes a bunch of chrysanthemums, and Quentin gets that faraway look on his face again.

“I know exactly what you’re thinking,” she sighs. “I’m sitting here pruning this plant, just as you’ve seen Angelique do a thousand times, am I right?”

She smiles, and says, “Our mother’s influence. It was she who taught us to care for plants and shrubbery, flowers. Consequently, every time Angelique or I got near a plant, we began to trim and prune it.” 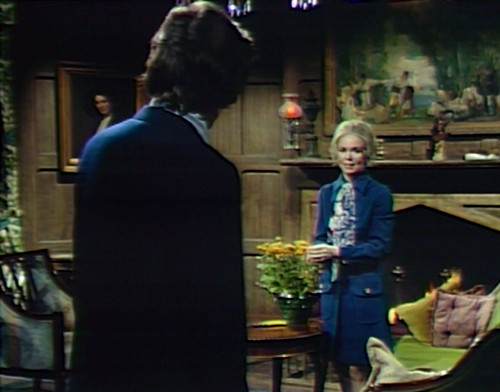 Quentin heads for the door, on account of this isn’t exactly riveting, but Alexis stops him with a question: “What would Angelique have done with these dead leaves? I don’t want to just leave them here for Hoffman to clean up.”

“I don’t remember what she did,” Quentin says. “I don’t think it matters.”

She turns. “Well, in that case, I’ll just throw them in the fire.” 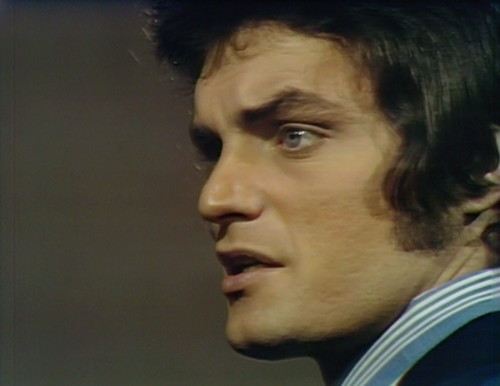 “Oh, yes,” Quentin says, making this face. “As a matter of fact, that’s exactly what she did.” This face.

So Quentin leaves, and Alexis just stands there, with a fistful of plant matter, thinking, dear God, do I have to justify every goddamn thing I do to you people? Christ. It’s no wonder I faked my own death and assumed my twin sister’s identity, I couldn’t stand to be a member of this family for another five minutes. And then she just throws the leaves on the rug, and vows to never hum again.

So anyway, do you remember that perfectly sensible thing that Aunt Hannah said to Bruno, about how she’d know the difference between Angelique and Alexis? Well, you can cross that idea off the list.

Hannah sits down with Alexis, who never liked her and doesn’t intend to start now. Everyone in the family always liked Angelique better than Alexis, including their father and dear Aunt Hannah, and Alexis isn’t particularly interested in developing her personal brand. She flares up almost instantly, and asks Hannah to please excuse her, but she has other things to do with her time. 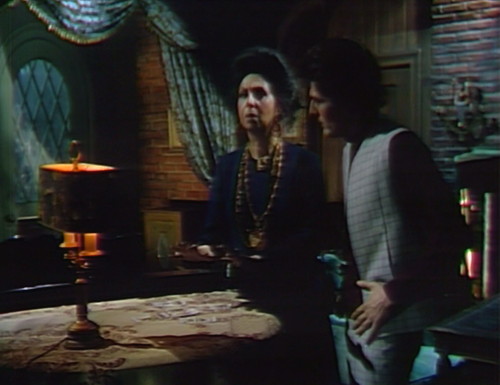 The handkerchief ritual’s a bust, go figure, so Hannah lays out some tarot cards, for her third failed divination technique of the day.

She says some magic words over the cards, and then she looks down, and gasps, “Angelique!” It’s a big moment. “Angelique is here! She’s here, at Collinwood!”

“No, no, wait!” cautions Hannah. “All I have seen is that Angelique is here. What form she has, I do not know!”

Bruno has no time for hair splitting. “She’s in her own form. She’s posing as Alexis!”

“No, no!” Hannah says. “The cards don’t explicitly say that! Remember, the dead can return in many ways — some visible, some not visible!”

So, great, that’s just what we need, a tarot lawyer. Apparently every one of these techniques has some kind of fine print. We’ve tried the cards, the stars, the pillow, the plant and the fine washables. Next, we could drag out the crystal ball, if you feel like, or we could wait forty years and see if anybody invents an app for this. I tell you, New York stage gypsies need to watch out. This is an industry just begging to be disrupted.

In the first act, when Quentin turns away from Daniel and Alexis, the boom mic is visible above the bed.

Alexis tells Quentin, “You know, it breaks my heart, the way David — Daniel is so insistent that I’m his mother.”

At the beginning of Bruno and Hannah’s second scene, something falls over with a clatter in the studio. There’s quite a bit of studio noise today, in little bits throughout the episode. One amusing example happens when Hannah is setting out her tarot cards. She tells Bruno, “I must have silence — complete silence!” and immediately after that, there’s some studio noise.

During the end credits, somebody casts a shadow on the tablecloth. It sticks around for most of the credits, and then slowly moves away.

Hannah Stokes is played by Paula Laurence, in seven episodes over the next month. She’s basically a fill-in role for Thayer David, who’s busy filming House of Dark Shadows. Hannah does all the stuff that “Timothy Stokes” would have done, and when he returns in episode 1027, Hannah is forgotten.

Paula Laurence had a Broadway career spanning three decades, from 1936 to 1967. She mostly appeared in comedies, including some musicals — Something for the Boys, One Touch of Venus, The Liar and Funny Girl. She also played the Female Beetle in the 1948 production of The Insect Comedy, Karel Capek’s satirical play about life in post-WWI Czechoslovakia. She also appeared in a couple episodes of Law & Order, but who didn’t?

David Henesy is the last cast member to leave for the House of Dark Shadows filming, and he’ll be the first one to return. He’s only gone for two weeks in broadcast time, although it was closer to a month in real life — the production shuts down for a week and a half in the middle, burning through the episode backlog while they wait for the House of Dark Shadows cast to come back. 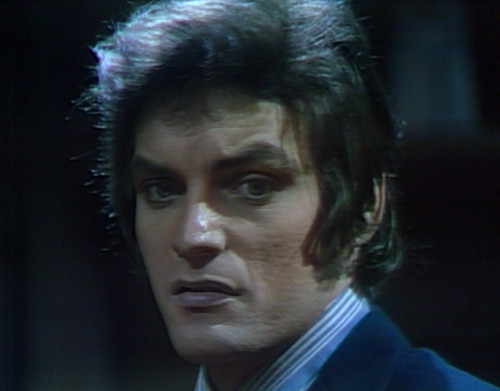