“I don’t know what to say either, except that he died horribly.”

A man is dead.

Like, super dead. You know how some people are dead? Well, this guy is even more dead than that. Way more.

Kneeling, the Sheriff pulls a discreet sheet over the deceased, shaking his head.

“Have you told his family?” he asks the people who were in the room when the man died but claim that they have no idea what killed him.

“No, I didn’t quite know what to say. I thought after you saw him…”

“Well, I’ve seen him,” nods the sheriff. “And I’ve seen that room that he was destroyed in. I don’t know what to say either, except that he died horribly.”

He paces around the crime scene. “I’ve never seen a room destroyed the way that one was, or a corpse that looks like that!” He sighs. “I haven’t the faintest idea who, or what, murdered him.”

Yeah, no kidding; you’re a Collinsport sheriff. You live in the most murdery town in America, and you’ve never solved a single crime. 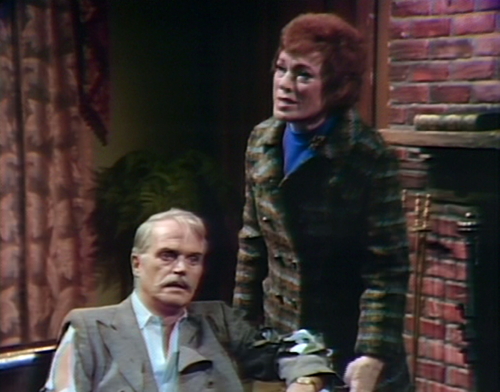 Although, to be fair, this situation is beyond the known limits of police procedure. Paul Stoddard was killed by a rampaging grow-your-own starbeast from beyond the dawn of time, unleashed on an unsuspecting world like a pack of delinquent Sea-Monkeys, who rappel over the side of the tank to wreak their furious revenge.

Earlier this evening, Dr. Julia Hoffman found Paul staggering out of the local antique shop, in an advanced state of distress — his clothes ragged and torn, his body battered and all the hair on his left arm singed off. He couldn’t explain what happened to him — couldn’t speak at all, actually. All he could do was sit there quietly and think things over, a dangerous pastime on a daytime soap that has recently transformed into an action-adventure sci-fi serial without telling anyone.

So Julia took the man to Professor Stokes, who’s an expert in almost everything except, apparently, this. Stokes tried to cure Paul’s advanced state of post-traumatic shock by encouraging him to get over it and tell them what happened. This approach met with only moderate success.

They got him up off the couch, so that was a start, but then he bolted into the next room and locked the door behind him, insisting that he would only talk to the police. And then there was a burst of noise and violence, like a herd of radioactive elephants exploding one at a time, as something unearthly crashed through the wall and ground poor Paul to powder.

To Julia and Stokes’ horror, Paul staggered from the room, covered in scorch marks and a mysterious green slime, and then fell to the carpet, dead. So now Stokes is going to have to get those carpets cleaned, replace the broken furniture, and get a contractor in to assess the structural damage. I’d say this is going to max out his deductible for sure.

And now Sheriff Davenport, a grown-up, stands helplessly in the middle of the crime scene, reviewing the case with his only suspects.

I mean, yes, admittedly, it’s hard to look at the physical evidence and deduce that Stokes and Julia ganged up on Paul with hammers and hot plates, beating him to death and then covering him in Creeple Peeple plastigoop before detonating a discreet pile of dynamite in the next room, mostly because it seems like a lot of work and she’s wearing a respectable Republican cloth coat, but still, the outrage did occur in Stokes’ house, and the pair of them are standing there, acting like they just happened to be passing through.

We didn’t see the part of this conversation where they told the Sheriff that they didn’t see what happened, because Paul had barricaded himself in the bedroom just before the incident. But if we had, I’m sure the Sheriff would have asked why Paul was so afraid of them that he locked them out, and they probably said that they didn’t know, they hadn’t really thought about it at the time, but yes, now that you’ve mentioned it, that is funny, isn’t it? 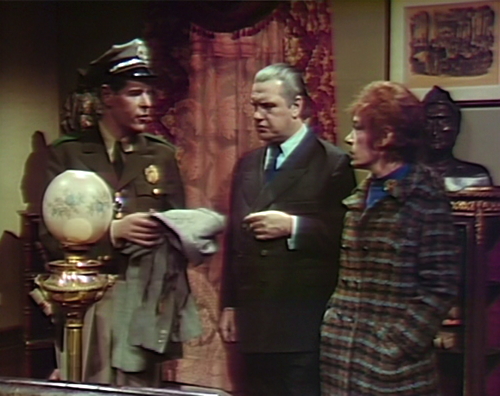 So this is another example of the Collinsport PD’s collaborative open-source forensics, where the officer painstakingly narrates every aspect of the investigation to whoever might be standing nearby, up to and including the suspects.

There’s a knock at the door, and Davenport says, “That’d be Joe Sykes. He’s going to take this coat over to the chemists, and see if they can identify the substance clinging to it.” Then he leaves the room, so that Julia and Stokes can confer privately about how much they feel like obstructing justice today.

“Do you think they’ll believe us?” Julia says, before the door closing sound effect has concluded.

“They must,” answers Stokes. “Julia, I think we should tell him about Barnabas Collins’ involvement. The situation has deteriorated so much that it’ll be impossible for us to keep anything back.”

Naturally, Julia has very little interest in tossing any information over the thin blue line. “No, I don’t think we can tell him about Barnabas,” she says, shocking no one. “He may have some plans, that we could spoil.” The idea that this violent death means that Barnabas’ plan isn’t going very well doesn’t seem to have occurred to her.

But this is the important thing to consider today: What is the relationship between these amateur sleuths and the actual authorities?

I suppose this particular murder was too much of a spectacle just to bury the body in the woods and hope nobody asks about it, like these people usually do. Julia bringing the shell-shocked Paul to Stokes’ house, instead of the police station or a hospital, pretty much sums up the usual disregard this show’s protagonists have towards civilization in general. They prefer to handle things in their own way, through the medium of easily-spoiled plans, which is why there are so many unsolved murders in Collinsport in the first place.

So it’s remarkable to see Julia cooperating with a police investigation, to even the limited extent that she currently is. The implication is that this is a particularly dangerous threat — not, like, tell the actual truth kind of dangerous, but dangerous enough to at least give the police a heads up.

Julia actually goes so far as to tell Davenport about the victim’s last words, which affect him so deeply that he takes a few steps downstage, to reflect on them.

“Monster,” he reads. “Room upstairs. Dark boards. Basement room. Breathing. Always breathing.” He looks up. “Are you sure this is what you heard, Dr. Hoffman?”

“I don’t understand. Why would he be talking about a monster?”

“Because some sort of monster was after him.”

Now, that’s just a killer line in general, one of those great moments in Dark Shadows dialogue, but it’s also a shocking lapse in protocol. Julia Hoffman is actually trying to convince the Collinsport police that there are monsters living amongst them. This is collaboration with the enemy on a fairly epic scale.

I mean, Julia is one of the founding members of Murder Club, the social network for monsters who cover up each other’s crimes, and here she is, openly Muldering.

“In my business, I go after killers, not monsters,” Davenport says, but she won’t let it go.

“You yourself said that you’d never seen a room like the one in which he was attacked,” she urges. “You’ve never seen burns like that, a substance. Odors in the room, and clinging to his jacket.” I tell you, the raven and the bat and the dark creatures of nature are going to be super pissed, when they hear about this. 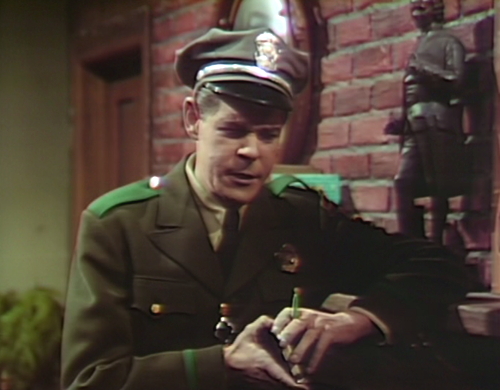 “Let’s just pass the monsters, for a moment,” Davenport says thoughtfully, strolling across the room and leaning on the mantelpiece. I’m not totally sure they’ve actually removed Paul’s body, by the way; it was on the floor covered with a sheet, last time I saw it. “Let’s get back to the other words that he said. Room upstairs, dark boards. Do you have any idea where this room could be?”

“Well, I saw him coming out of the Todds’ antique shop,” Julia offers.

“The Todds’ antique shop?” He executes a shrug. “They wouldn’t have anything to do with his death.” And then he just stands there, propped up against the wall, defeated. 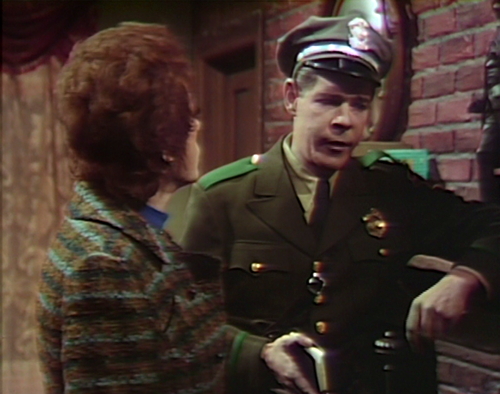 Oh, for goodness sakes, Julia says, internally. This is why everyone I know is still at large.

“He was coming out of that shop,” she repeats, and then waits to see if anything happens.

“You know, it’s funny,” he says, finally. “Mrs. Todd called me earlier, about Mr. Stoddard. I thought it was because of Carolyn.”

“Carolyn?” she says, baiting the hook. “I’ve got to tell Carolyn! But — what’ll I say?” And then she looks at the Sheriff, as if she hasn’t spent the last three years of her life covering up monster attacks pretty much full-time. 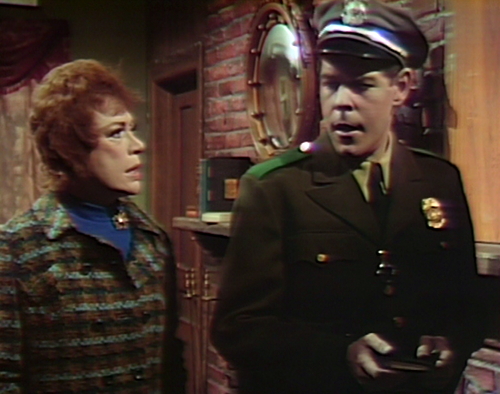 So that’s the moment, I think, where it becomes clear what’s going on.

Julia Hoffman does not need a small-town Sheriff to suggest that she tell people that it was a heart attack. She’s the one who tells people that things which are clearly not heart attacks are heart attacks. But she wants to make sure that Davenport feels involved in the discussion.

He needs to believe that these are his decisions, that she’s a concerned citizen who just happens to be tagging along on this investigation, rather than the criminal mastermind that she actually is.

In truth, this storyline is about a gang war between two dangerous supernatural mobs — Julia, Stokes, Chris and Quentin on one side, and Barnabas, Megan, Philip and the sprout on the other — fighting for control of the Collinwood estate. Julia and her associates have a lot of skills — hypnotism, trespassing, grave-robbing and facial expressions — but she can’t get a search warrant, on her own. She needs somebody to take care of that angle, and guess what, 911 is apparently an accomplice delivery service.

So here she is, Julia Hoffman and her pet detective, with a magic ticket that ought to get them all the way upstairs, to the answers that she’s been trying to access for weeks. Look at her face, while her front man does the talking.

I’m Julia Hoffman, bitch. Cops in this town work for me, now.

Tomorrow: The Monster at the End of This Week.

Davenport explains, “Fisk is going to erase an — arrange an autopsy.”

When Davenport steps to stage front to think about Paul’s last words, he’s out of his light; there’s a shadow on his face.

When Philip tells the Sheriff that Paul was “very, very disturbed,” something falls over in the studio.

Tomorrow: The Monster at the End of This Week. 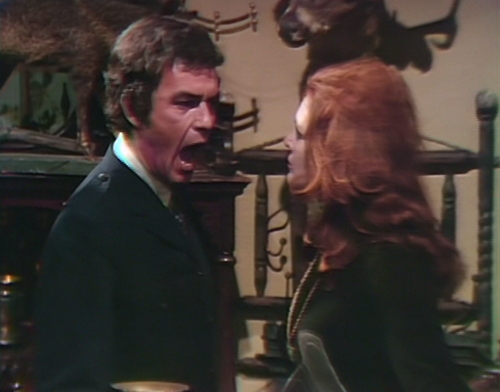