“Was she so hysterical as to mistake a snake for a cat?”

We’re spending two weeks reading the 1971 Dark Shadows comic strip, and I know, I’m just as sick of it as you are. The thing just runs and runs, and never really gets anywhere, because the show’s been boiled all the way down to a simple, repeatable formula.

Barnabas is a vampire, Elizabeth and Carolyn are rich clueless women living in a huge mansion, and then an interloper appears — a ghost, a goddess, a werewolf, a warlock, whatever you have lying around. The newcomer puts someone in danger. Barnabas tries to fight it, and fails. Then he talks to someone, or travels somewhere, and figures out the villain’s secret weakness. Barnabas sets a trap for the baddie, waves his magic wand, and then everything is fine.

It’s an added bonus if you can connect the monster of the month to Barnabas’ past, but honestly, it could be anything. I mean, you could even do a woman who turns into a cat with snake venom on her claws. Oh wait, they already did. 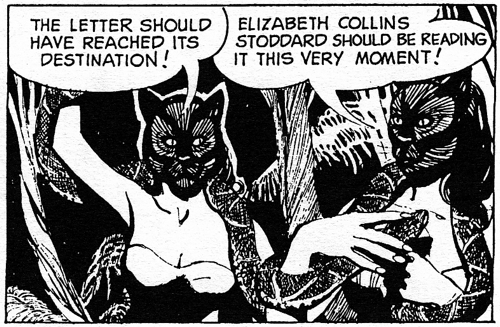 So this… I mean, I don’t even know what you do with this. It’s a Caribbean cat cult, I guess, which plays with poisonous snakes. I have no idea what the connection is between the cats and the snakes, and to be honest with you, I don’t really want to know.

It’s the curse of the fan that once you dig deep into something — no matter how ridiculous and lowbrow it may be — you end up picking favorites. So it’s possible to write a really long article about the Top Ten Episodes of My Little Pony: Friendship Is Magic, and mean every word of it, even though to an outside observer, they all look exactly the same. The minor variations between one episode and another are invisible to the untrained eye, but those details are magnified when you start looking really closely.

So it’s possible for me to say that this cat cult story is the worst of the six chapters in the Dark Shadows comic strip, which was already pretty much the worst to start with.

The story concerns Elizabeth’s old college roommate, Fern Kapora, who comes to Collinwood pretending to be her own younger sister, Desiree Kapora. I have no idea why she does this; it means nothing. But there’s a big moment at the climax of the story, when it’s revealed that Desiree is actually Fern Kapora! — which they treat as a stop-press revelation that busts the case wide open.

Although I suppose finding out that somebody is Fern Kapora could be pretty alarming. I mean, when you think about it, if Desiree is Fern Kapora, then anyone could be Fern Kapora. In fact, I could admit to you right now that I am Fern Kapora, and what could you do? Nothing! You’d be entirely at my mercy… at the mercy of Fern Kapora. 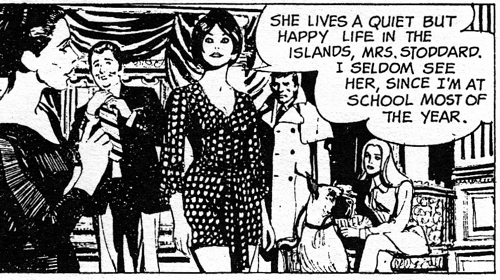 But this story does contribute one thing to the Dark Shadows mythos — Carolyn’s Great Dane. He arrives out of pretty much nowhere, just showing up in a panel. Carolyn is having an argument with a guy that she’s been dating, and in panel 2, there’s an unheralded dog head. Nobody mentions it or even appears to notice it; it’s just there, and we have to deal with it.

Reading the reprint book, I actually didn’t even notice that there was a dog in those strips until three pages later, when he gets a big action sequence. “Carolyn’s huge hound wakens,” says the breathless caption, “a growl rumbles from its throat as the dog senses imminent death!” So I said, Carolyn’s huge what? and then flipped back a couple pages.

The imminent death is Fern Kapora, obviously, pretending to be her sister, who’s pretending to be a cat, quite successfully. The cat sneaks into Carolyn’s bedroom, murder on its mind, and the huge hound leaps to his mistress’ defense. The cat scratches the dog, and the dog instantly dies, because that is how cats work. Cats are fatal. Now you know.

It’s only after the dog has fallen that we find out his name, which is Big Boy. “I was asleep, and I heard Big Boy growling!” Carolyn says. “Big Boy tried to protect me!” I bet we find out later that he was actually Fern Kapora. 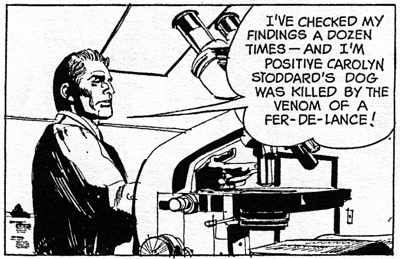 This begins a gripping CSI sequence, with two guys at the Collinsport Police Lab testing and squabbling and peering into microscopes, desperately trying to crack this baffling case. It turns out that Big Boy was killed by the venom of a fer-de-lance, a deadly Caribbean pit viper. “I’ve checked my findings a dozen times!” say the hard-working scientists. “I’d never believe it if I hadn’t tested these samples myself!” Usually people just bury their dog in the back yard, and get a new one. 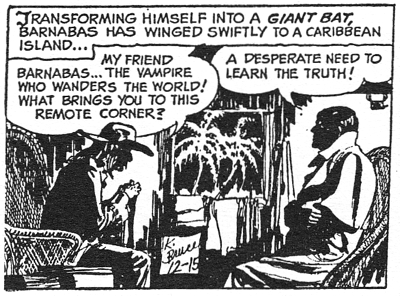 Deciding that this is his problem for some reason, Barnabas changes into a giant bat and zooms from Collinsport, Maine, to the lush rain forest of a Caribbean island. There, he talks to his old friend Mordecai, who tells him about the Cult of the Cat-People, who have nine lives and spend their time dancing around naked, with snakes. 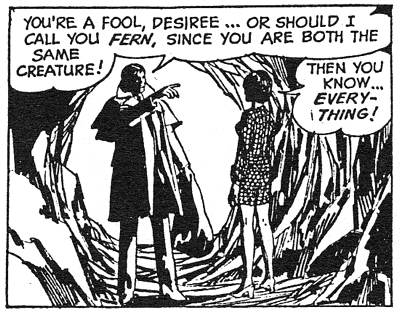 This isn’t a soap opera, is my point. Barnabas finds out what the monster’s weakness is — it’s snake venom, believe it or not — and he kills her. That’s the end of another chapter, and then we start all over again from the top.

So when I talk about the power of long-running serialized narrative, I guess I have to be more specific. This comic strip is serialized, in the sense that it’s delivered to us in the newspaper, three panels a day — but nothing ever changes, except the villain’s name, motive and fatal flaw. Big Boy is summoned into existence in order to die, and once this chapter is over, he’s never mentioned again. The characters don’t accumulate memories or experiences; they just trudge through another round of the same old thing.

By the end, the writers of the television show said that they ran out of ideas — they’d already explored every time period they were interested in, and there wasn’t anything new for these characters to do. The comic strip didn’t have that problem, because new things aren’t required. All you need is to throw together a handful of elements every two or three months, and let it run. But it’s never going to get any more interesting than it is right now. So why bother?

Tomorrow: The Treachery of Images. 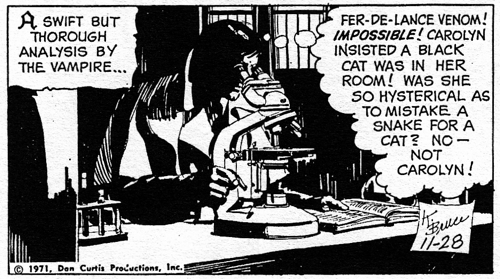