“How strange! At first, I too wished your final death!”

Convinced that Barnabas has the soul of her lost love, Isis uses the amulet to hypnotize him into remembering his previous incarnations. “Gaze into the past!” she urges, as if Barnabas ever does anything else.

We’re reading the 1971 Dark Shadows comic strip this week, because I’m currently traveling, and why not. The daily strip has taken the sprawling, open-ended mess of a show, and stripped it down to the essential elements — a big house, and a romance-minded vampire. This is about as far as you can possibly go, and still call the thing Dark Shadows. Any further than this, and you should just admit that you didn’t feel like doing a Dark Shadows comic strip in the first place.

And even the vampire part is kind of theoretical; Barnabas doesn’t actually do a lot of vampire stuff in the comics. He bares his fangs four times in the year that the strip ran — twice to bite people who are immortal anyway, and the other times just for the hell of it — and he turns into a bat three times. The other three hundred and fifty-nine days of the year, he’s basically coasting.

As with almost everything that has to do with Dark Shadows, the motivation for this creative decision is more practical than artistic. The TV show already bumps up against the boundaries of popular taste, a slice of murder and black magic every afternoon, and that’s based on trial-and-error with the specific audience of housewives and teenagers that the show can reach.

A comic strip is viewed by a much broader audience — not necessarily read by everyone, but it’s published in the newspaper for everyone to see — so a main character who kills people with his teeth can’t just fly under the radar. When Barnabas bites, it’s always somebody who doesn’t really mind.

With Isis, the attack is “the bite of love,” an act of adoration. He bites her in the first panel, and then in the second panel, he draws back and says, “No blood… no scar…” This maintains the romantic fantasy, without spooking the grandparents.

So in the transition from TV show to comic strip, we’ve lost the large cast of homicidal maniacs, strangling and swindling and digging up graves. Instead, we just have Barnabas, who contains multitudes.

Isis uses her amazing amulet to reveal the truth to Barnabas, who breathes, “I… am… Osiris…!” And once Barnabas admits to being the judge of the dead, Isis reveals that he was murdered by his brother Set five thousand years ago, and his soul has been on the move ever since. Get a load of this. 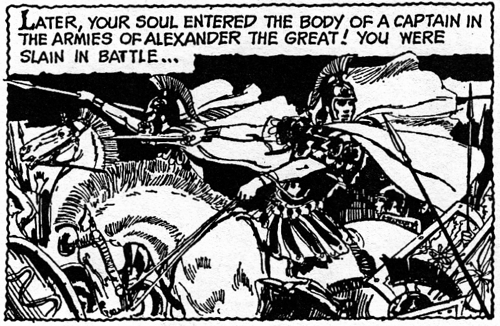 “Your soul entered the body of a captain in the armies of Alexander the Great! You were slain in battle…

“Time flowed on… Your soul rested in the body of a knight during the First Crusade… and then in the powerful torso of a sea raider. 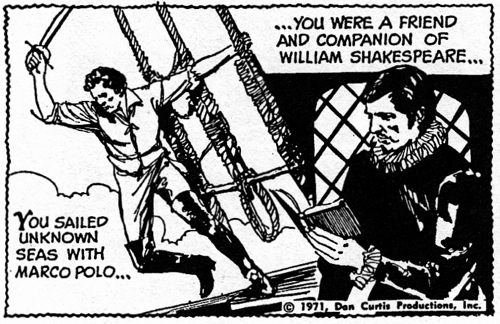 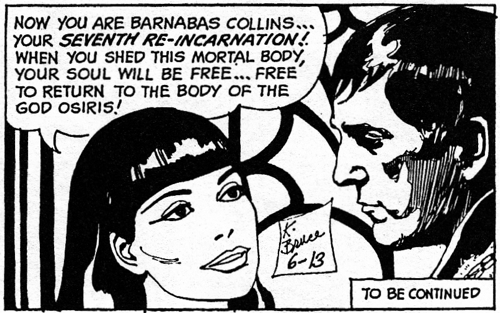 “Now you are Barnabas Collins… your seventh re-incarnation! When you shed this mortal body, your soul will be free… Free to return to the body of the god Osiris!”

So that’s what we get, in exchange for giving up the rest of the cast — a parade of Frids Through the Ages. It turns out that world history is as obsessed with Barnabas as everybody else.

Now, you may wonder what impact these astonishing revelations have on the rest of the story. The answer is: none at all. In ancient Egyptian mythology, Osiris patrolled the afterlife and judged the dead, and he was also the god of sprouting nature and the annual flooding of the Nile. This isn’t a particularly useful power set for a comic strip that takes place in Maine.

Isis allows Barnabas to return to the present, and has a lengthy thinks monologue about her next move. This involves a ton of ellipses, because the scripter apparently thinks that everybody should be breathless at all times, even in thinks.

Only a simple ceremony… and the body of Barnabas Collins becomes but a vague memory! His soul is free! What prevents me…

Is it possible that the goddess Isis… has fallen in love with that brooding, handsome vampire?

How can I love both Osiris and Barnabas? And yet… in truth… I do! For both share the same beautiful inner soul…

This is taking a page out of the Paperback Library gothic romance novels, which are always going on about how handsome Barnabas is. Apparently, he’s even more of a panty melter in the newspaper. 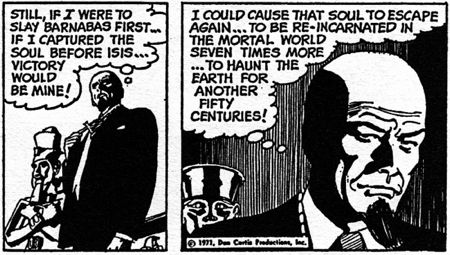 But wouldn’t you know it, somebody always has to crash the party. Set — the evil god of darkness, and rival for Isis’ love (citation needed) — plans to kill Barnabas, steal the amulet of Osiris, and set the soul of his brother drifting through the ages again for another five thousand years, at which point I suppose he’ll be living in a colony in the Alpha Centauri system.

Set consults with the great god Ptah, who used to be the creator of all things, and is now running some kind of ancient Egyptian consulting service. As we saw yesterday, Ptah helped Isis to make Carolyn Stoddard mysteriously ill, and now Set has a request of his own.

In a flourish of lunatic spectacle, Set creates a “false night” that only applies to the area immediately surrounding Barnabas’ house. This wakes up the vampire too early, so that he goes outside and burns up in the sunlight.

And I have to say, this idea kind of justifies the entire comic strip so far. It’s something that can only be depicted in the two-dimensional world of the comics, where you can be hypnotized into thinking that it makes even the slightest bit of sense. This is the purpose of Dark Shadows — to show us things that we never expected — and I think it surpasses the Paperback Library novels and Gold Key comics for pure nuttiness.

Naturally, Isis senses the threat to Barnabas, because everybody is constantly sensing things in this strip, and she sends an emergency SOS to the great god Ptah, asking for help.

And what do you know, Ptah saves Barnabas — through the medium of having him recognize the song of the lark, a morning bird, and decide to return to his coffin rather than go outside. I don’t know why Ptah agrees to be this divine ping-pong ball batting back and forth between Isis and Set, but I suppose anything’s possible with ancient Egyptian gods in the mix.

By now, Isis has decided that she loves Barnabas too much to kill his mortal body and steal his soul, so she summons a sacred ibis from wherever sacred ibises come from, to bring the amulet back to Osiris’ tomb and make sure it doesn’t fall into Set’s hands.

Set, who is basically Magica De Spell from DuckTales at this point, senses that Isis sent the ibis, and he summons a killer falcon to grab the amulet from the other bird’s beak. And you’ll never guess what happens next.

Barnabas — who senses what Set sensed about Isis’ ibis — bares his fangs, transforms into a bat, and takes to the skies. I’m pretty sure this is a metaphor for something, but I can’t figure out what.

So there’s a three-way dogfight in the sky, which takes about five days. Barnabas drives away Set’s falcon, and Isis’ ibis makes it to the tomb on time, which I believe is game, Set and match.

There’s no particular reason for this sequence — almost immediately afterwards, Isis leaves the strip, and she could have just taken the amulet with her — but again, you wouldn’t see Barnabas involved in a three-way aerial bird battle anywhere else, and that’s justification enough.

It’s time to wrap up the story and return everybody to their default settings, so Isis decides that she can’t kill Barnabas in order to harvest Osiris’ soul. “I have waited fifty centuries!” she breathes, as she moves in for a kiss. “I can wait… just a little longer…”

Just to make sure that there’s no unauthorized story development, Isis uses her Men in Black neuralyzer on Barnabas. “It is almost dawn!” she says. “Go now, my beloved… and do not remember! Erase this night from your memory! I — goddess Isis — decree it!”

So that’s why, when Barnabas Collins finally dies — after Big Finish is done with him, I suppose — then Isis will show up again to collect his soul, and he’ll return to his true identity of Osiris, the god of the afterlife. That is how Dark Shadows will end.