“When I have proof of your perfidy, I will make your life miserable!”

Hey! Trask’s back. It’s been a month since we’ve seen the rotten Reverend Gregory Trask, and I’ve missed him terribly. Sam Hall wrote today’s episode, and he loves writing dialogue for Trask. I love listening to it, so today I’m just going to sit back and enjoy some Trask trash talk. 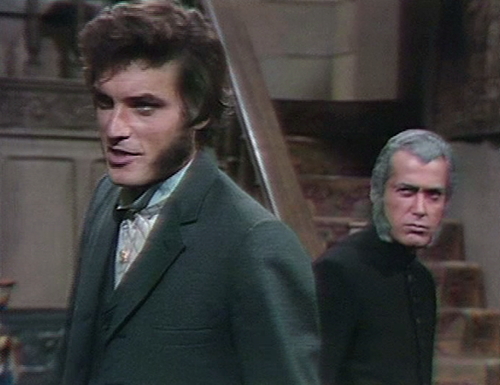 Trask:  You know something about this, Quentin! What have you done with her?

Trask:  Don’t play dumb with me, Quentin! From the moment you first saw her, I knew you would try something like this. Where is Amanda Harris?

Quentin:  Well, if she’s not in her room…

Trask:  Her clothes are gone, there is no sign of her!

Quentin:  Hmmm, so I’m the villain.

Trask:  I am no fool, Quentin! I can see through your deviousness, your arrogance! Where is Amanda?

Quentin:  Well, when I find her, I’ll tell you.

Trask:  Where are you going?

Quentin:  To my room. Am I allowed, teacher?

Trask:  I am not satisfied with your answers!

Trask:  When I have proof of your perfidy, I will make your life miserable!

Quentin:  You make my life miserable, just by existing.

Trask:  I see through you, Quentin Collins! Don’t you forget it! I know you are the source of evil in this house! And I will find Amanda Harris, and I will rescue her from your evil!

Trask:  You will see, Quentin! YOU WILL SEE! 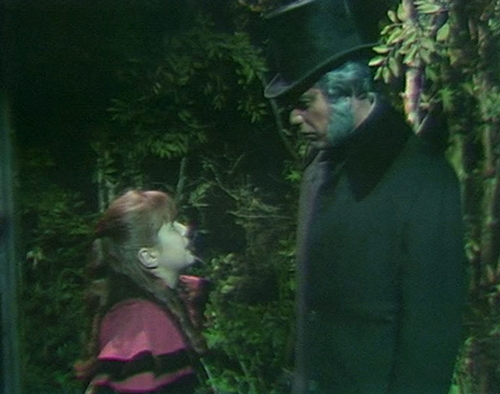 Trask:  So, Nora! You were going out to the garden!

Nora:  I had something else to do, too.

Trask:  No, Nora! It grieves me very much, but you have lied to me! Who lives in that house?

Trask:  You don’t know? Then what are you doing here? What is that you have in your hand?

Trask:  You lie so easily, Nora! We will correct that in time! Now, give me that envelope!

Trask:  I cannot let you commit this sin!

Amanda:  What I’m doing is no sin!

Trask:  You’re running away with Quentin Collins! Do not deny it! 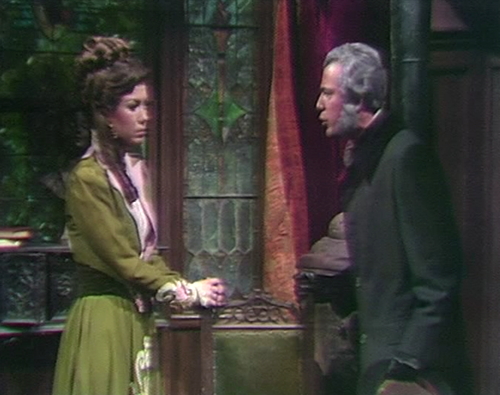 Trask:  When you first came to me, you were in the depths of despondency because of a man. Surely you can see that Quentin is no better! I have seen what effect he has on women!

Amanda:  I don’t want to talk about Quentin. I want you to understand me. I came to you with a lie. It was a trick. I wanted you to fall in love with me. It was cheap, contemptible, and I hated myself. But then I saw the way you looked at me.

Trask:  I looked at you with acceptance, with forgiveness!

Amanda:  Revered Trask, you’re a hypocrite! And I don’t have time to listen to your lies.

Amanda:  You live them!

Trask:  I live to help others! I want to save you from misery, from sin! Don’t you realize the path down which Quentin will lead you? Do you believe for one minute he’s meant what he told you?

Trask:  Do you know where he is right now?

Trask:  Oh, indeed! Is he going to bring Angelique with him? 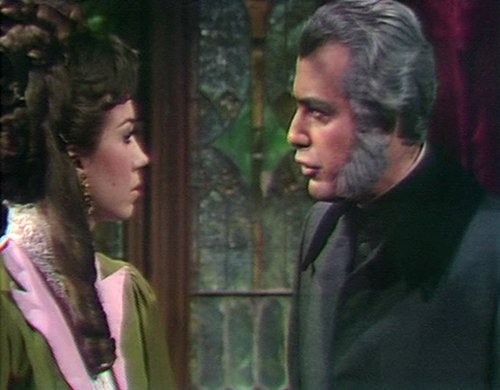 Trask:  When I left Collinwood, they were together in the drawing room, LAUGHING! Were they laughing about you?

Amanda:  I don’t believe you!

Trask:  I did hear them making their plans for the evening.

Trask:  The carriage was waiting outside!

Amanda:  To pick him up for the station.

Trask:  No, my dear! To take them to the inn! They’re having dinner there tonight. I am not telling you this because I enjoy it. You have hurt me, but I will not be guilty of trying to repay in kind.

Trask:  Amanda, surely you must face the fact that Quentin is incapable of compassion, of morality! You must never speak to him again!

Trask:  My dear! You must control yourself! I AM YOUR ONLY FRIEND!

Quentin packs a white Hanes T-shirt, which I’m pretty sure is an anachronism. Wikipedia says that cotton undershirts with no buttons became popular during and after the Spanish-American War of 1898.

When Quentin tells Nora that he loves Jamison, somebody in the studio coughs.

As usual when Denise Nickerson leaves a set, you can hear her running to the next set. That girl seriously needs to invest in quieter shoes.

When Tate falls to the floor after his fight with Quentin, he’s squashed up against the couch. A second later, somebody — clearly not Quentin — jerks the couch out of the shot, so that Tate can stretch out on the ground.

It takes a second try for Amanda to close the door behind Reverend Trask.

I cleaned up one of the quotes above. Trask actually says, “Amanda, you must face the fact that Quentin is uncapable of compassion, of morality!”

The railroad station master is played by John Hallow, in his only Dark Shadows ep. Hallow had a lengthy career on Broadway as an understudy and occasional stage manager, from 1954 to 1983. This was his first television role; he also had small roles on Kojak and Fame, and in a 1982 TV-movie called The Royal Romance of Charles and Diana.