“I just can’t remember all the reasons why we should get rid of the vampire.”

Well, here we go again. Vampire fugitive Barnabas Collins — on the run, and spending his days sleeping in a cave, apparently — pirouettes into his secret headquarters at the old rectory, and tells his friend Julia — who has recently channeled the zeitgeist in order to travel back in time and help him — that they have to change their plans to defeat the mad old wizard who’s threatening the future of the Collins family, and all of the people that he loves. Why? Because he just ran into somebody who reminds him of Josette. That’s why.

It’s maddening, and just imagine how Julia feels. She came all the way here from the 20th century for this. Barnabas is the one who convinced her that they need to stay in this time so they can counter the wicked Count Petofi, and now, quelle surprise, he’s going off-script.

He was just out rambling around in the woods, like he shouldn’t be, when all of a sudden who should come along but Lady Hampshire, a brand-new character who’s played by the same actress that played his long-lost love a couple years ago, and therefore she is the actual reincarnation of Josette, according to rules that only seem to apply to this specific instance. And you know how Barnabas gets, when he thinks he’s found a reincarnation. This is his third consecutive swing at that particular plot-point piñata, and it’ll probably end the same way, with gunfire. 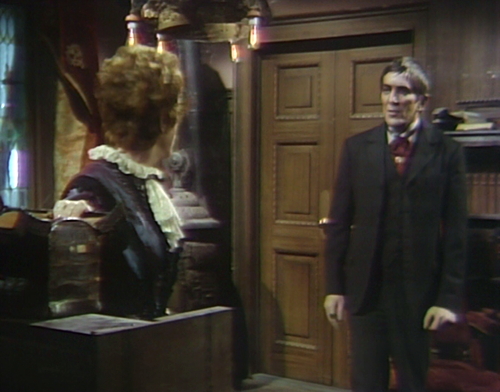 So here’s Barnabas in the rectory, where Julia is preparing one of her anti-vampire injections, and he’s just giddy, pacing around the room. Julia asks if something’s happened tonight, and he delivers the big news.

“Yes,” he says, breathlessly. “Oh, Julia, something incredible. Something that will make it imperative that we change all our plans. I have met her again!” He looks off into the distance, which he was probably planning to do anyway. “Josette,” he sighs. “My Josette has come back to me!”

Julia goes through several stages of unthrilled, all in a row. She tells him it’s not Josette, but he insists that it is.

He floats around the room, chirping, “It’s as if I were back in time again,” to which Julia says, Dude, you already are back in time. That’s where we currently are right now, back in time! We’re as much back as we need to be; going more back is counter-productive. But try explaining anything to Barnabas. 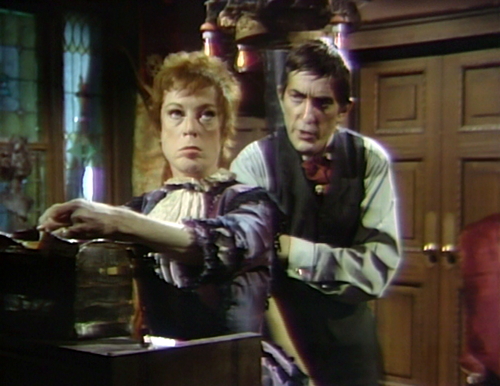 So if somebody’s killing Barnabas today — and I regret to say, somebody is — then the prime suspect is clearly Dr. Julia Hoffman, and the murder will take place in the next thirty seconds.

I mean, look at her face. That’s someone who’s about to jab a needle into your arm. Barnabas sure knows how to live dangerously, even for a dead guy.

The really frustrating thing is that we were just getting somewhere really exciting. Count Petofi’s been encroaching on the soul of dreamy teen hearthrob Quentin Collins, so Barnabas hatched a secret scheme with his pals Julia and Angelique, to retrieve Quentin from the Count’s clutches. That sentence included the names of five all-time Dark Shadows rock stars, so obviously this is an unbeatable storyline that demands our immediate attention. So now he wants to bail on the plan, before we even know what it is yet? Not acceptable.

The question on the table today is: Do we actually need a Barnabas? If we already have villains and vixens and tortured hearthrobs, which we do, in abundance, then why are we paying a protagonist’s salary to a guy who can’t stay focused on whatever scrap of a storyline he has left? 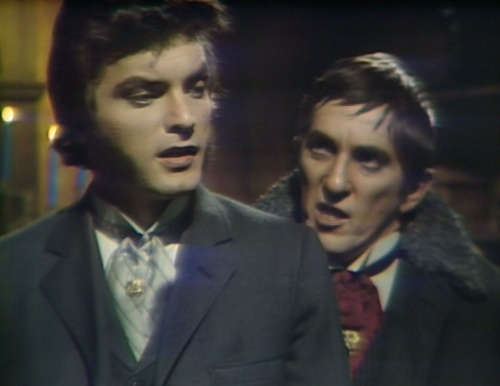 So Barnabas sashays over to Collinwood, where he is not allowed to even be, and he gives Quentin the stop-press news that there’s a girl that he likes.

Barnabas asks for Quentin’s help, and Quentin says, “Barnabas, how can I help you?” except he says it like “How can — (choke) — I — ‘help’ you?” and then he makes bonus eyebrow movements.

Quentin’s always somewhere on the “tortured” index, but today even more so, because Count Petofi is pressuring him to turn on his friends, specifically the one he’s talking to right now. So Quentin is indicating that he’s troubled by this, and he’s not doing it in a particularly subtle way. That’s fine with me, because Dark Shadows has taught me that subtlety is overrated, but Quentin is currently broadcasting discomfort on all frequencies, and Barnabas is not even paying attention. 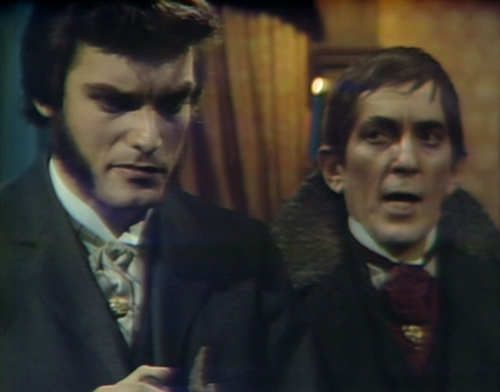 So the reason why Barnabas took his life in his hands and showed up at Collinwood tonight is that he wants Quentin to hand Kitty a note that says, “Somebody you just met likes you, do you like him? Check yes or no.” And if she checks yes, then Quentin should tell her to go meet Barnabas at —

“No!” Quentin blurts out. “No, don’t tell me! I don’t want to know. I’ll leave word with Julia where you’re to come.”

Barnabas says, “No, I want Julia to know nothing about this,” which is a problem for a couple reasons, one of them grammatical. “Come to my hiding place.”

Now, the reason why they’re keeping the secret plan secret is that they suspect that Quentin may be giving information to Petofi, and this is exactly the information that the secret plan is secretly planned to protect. This is why Julia was so upset a minute ago, when he said he was screwing with the plan. Barnabas is terrible at everything. 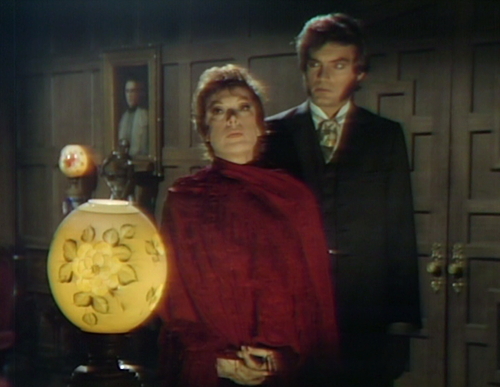 Later on, Julia comes to Collinwood to see Quentin and just knocks on the door, even though she’s trying to hide from pretty much everybody here. Apparently, in 1897, being on the lam is conducted entirely on the honor system. She knows that Barnabas talked to Quentin about Kitty, and she wants Quentin to do the opposite of whatever Barnabas said. Her advice: Yawn and look at your watch a lot, and ask what she’s planning to do after her visit is over. Maybe leave some bus schedules lying around.

Quentin says that Julia’s being unreasonable, and she says, “I suppose it sounds that way, but — I don’t want anything to happen to Barnabas Collins. Do you?”

He says no, of course he doesn’t, but the question hits home — and after Julia leaves, Quentin still hears her voice, challenging him: I don’t want anything to happen to Barnabas Collins. Do you? Do you? Do you???

So that’s the argument for the prosecution. If the steps to audience approval are make a friend, make a joke, and make a plot point happen, then Barnabas is currently doing the opposite. He’s tearing his friends apart, he’s being overly serious about a ridiculous idea, and worst of all, he’s bringing plot points to a screeching halt. Barnabas Collins has got to be stopped, and this time I mean it.

To be honest, he’s been asking for this for a while. Barnabas was released from his vampire curse back in 1969, but he became a vampire again when he started this 1897 time trip, and he’s been here for six and a half months. This is approaching his previous all-time record from 1967, when he was a vampire for seven months. This appears to be the hard limit on the amount of time Dark Shadows is able to commit to a vampire protagonist.

Because it turns out that from a narrative point of view, a vampire is a big investment. He can’t appear in daytime scenes, which means everybody else needs to timeshift in order to have a conversation with him. Also, every once in a while you have to let him kill somebody, because otherwise he’s essentially pointless and a net liability.

As the cast dwindles, if everybody stays clueless about him being a vampire, then you have to start reducing IQ points — but if everybody finds out that he’s a vampire, as they have in 1897, then that means he has to go hide in a cave, and then you have a main character who’s not allowed to be in scenes with almost anybody else on the show. In open-ended serialized narrative, a vampire is an unstable character type — somebody who ultimately causes more story problems than he solves.

The writers planned for Barnabas to have a little exciting “vampire hunt” sequence as they were heading for the conclusion of the 1897 storyline, but then they decided to extend the time trip for a while. Barnabas has been on the run for almost three months now, which means he’s basically radioactive. He may think that he’s going to start a romance with Kitty, but it’s only a matter of time before somebody tells her that he’s a vampire, and then what?

This is why all the other vampires on the show get staked, before they do too much damage to the story structure. Tom, Dirk, Megan and Roxanne probably get a couple weeks each; Angelique’s vampire phase lasted a little bit longer than average, but then she just disappeared from the show, while we were all thinking about something else.

To keep Barnabas on the show, they have to shuffle him back and forth between vampire and human, to a point where it seems almost haphazard. So they’re wrestling, as always, with the idea of a permanent vampire protagonist. 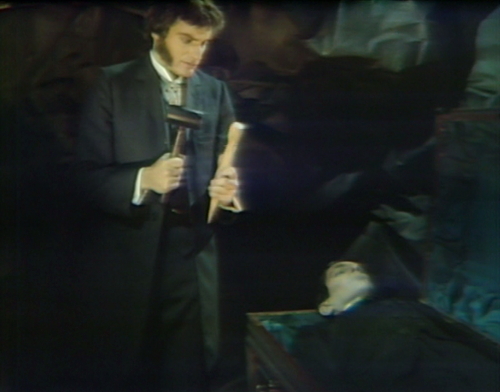 So if they’re going to do this — if they’re actually going to drive a stake through the guy’s heart, and they are — then the only solution is to have Quentin do it. This is his story, after all — Barnabas is just a weird intruder, who wanted to help but ultimately didn’t really accomplish very much after all.

Quentin is a monster too, but he’s in remission, and anyway, his monster side only shows up two nights a month, which is adorable. Narratively, it’s not that hard to accommodate a werewolf on a continuing soap opera, which is why pretty much every soap opera that’s currently on the air has at least one werewolf in the main cast.

Quentin is the new teen dream, and he’s taken over as the protagonist anyway, so yeah, this story point really only makes sense if Quentin is the guy with the hammer. 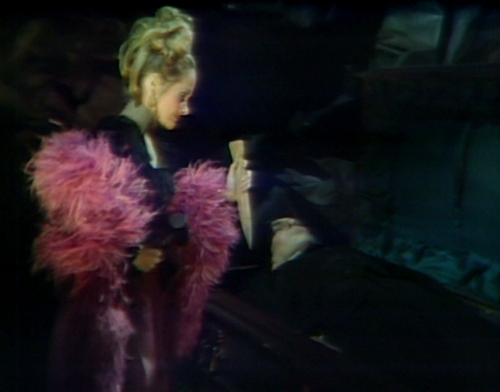 That’s why they don’t do it that way, because what’s the use of Dark Shadows if it makes sense? So Quentin taps out, and in his place, here’s Pansy “Charity Trask” Faye, an insane woman who’s possessed by the spirit of a different insane woman. She follows Quentin to the cave, wearing an enormous hot pink feather boa, on account of stealth. And when an anguished Quentin throws the hammer and stake to the ground, she picks them up and starts making executive decisions. 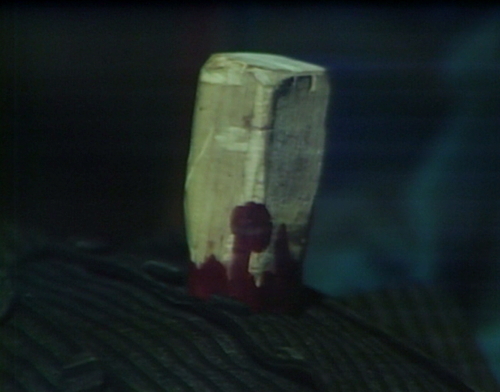 So there you have it. For months now, Pansy has been offering to dance our cares away, and here she is, finally delivering on that promise.

Barnabas Collins is dead. I mean, he always was, but even more than usual.

In her first scene with Barnabas, Julia looks at the teleprompter before delivering every line.

In act 2, there’s an unusual edit between the scene in Quentin’s room and Julia knocking on the front door. The edit makes it look like Quentin just teleported downstairs into the drawing room.

Charity yells at Quentin, “It’s thinking like yours what lets that lat vampire still be on the loose!”

Charity asks if Quentin knows what happened three months ago, tonight. She’s talking about Carl’s murder, and she has the dates right. Barnabas killed Carl during the evening of episodes 779 and 780, which aired on June 19th and 20th. Today’s episode airs on September 19th. 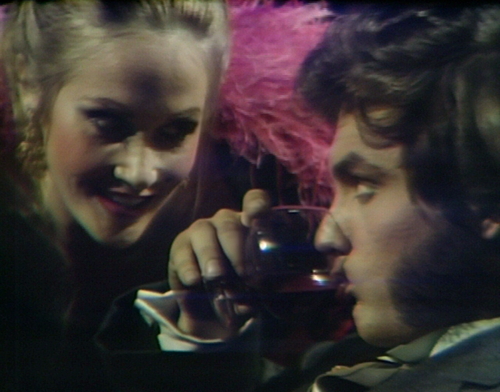