“I will not let him, nor what he knows, step in the way of what I must do.”

Oh, I know what I have to do! And I’m doing it, right now! I’m doing just what she says! Laura! Yes! She told me to give this letter to you! Now, you have to read it very carefully! Very, very carefully! Because it’s about — Barnabas Collins! 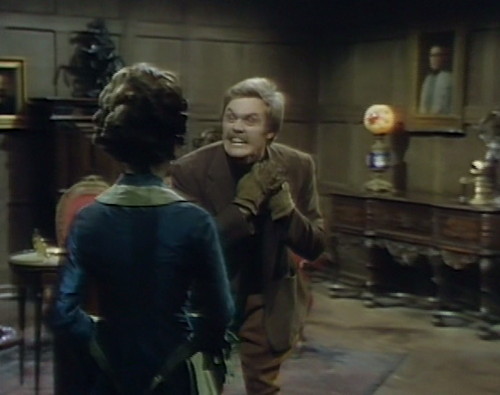 You know, Miss Collins, you’ve always hated Laura, didn’t ya? You know, I used to look at your eyes! I used to watch the way you watched her! And when you did, I noticed there was a little pulsing, kinda tight pulsing thing in your neck! You know what I wanted to do? I wanted to choke you!

No, you’re trying to fool me! You’re trying to fool me, just like you tried to fool Laura! Laura said right from the first that you hated her! Yeah! You were one of the reasons that she had to go! You know? I made a vow! You know what that vow was? Huh? I hated you, and I vowed that I was going to avenge it sometime! And I think the time is now! 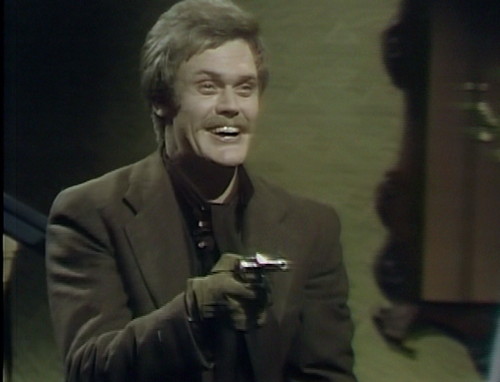 Oh, listen, you don’t have to bother. All dead things look the same! Oh, but he’s dead all right! Yeah? I did it because of Laura! That’s why! Because she wanted revenge! Don’t you see? It was so simple! And, Laura — Laura, wherever you are, I’m not through yet! This is just the beginning! Why, before I’m through, I’m gonna get ’em all!

Now, he’s dead, and he’s in the cellar in his coffin at the Old House! That’s where he keeps his coffin! Because of what he is! Because of his secret! The secret that he hurt your mother with! Look, you can’t go, you cannot go until you promise me that you won’t tell anybody!

Laura? Laura, it’s all finished for Barnabas! What he tried to do to you! All the ways he wanted to hurt you! No more! Does that make you happy, Laura? The way I told Jamison? I know it did. Is that what you want from me? Laura? Laura! If it is, please give me a sign! Just give me a sign, one little sign, and make yourself known to me! Just be right here with me, now! Laura! Laura, is that you?

Barnabas opens the coffin while Beth is in the basement. As she says, “No, it can’t be!” there’s the sound of a zipper.

When Dirk bends down to address the flames during Barnabas’ scare attack, a couple of Dirk’s lines pick up the reverb effect intended for Barnabas.

Barnabas tells Dirk, “No one else will ever know that you’ve been in this house!” Except they’re standing in the cottage, and Barnabas is talking about the Old House.

At the Old House, when Jamison peers through the grate of the basement door, you can clearly see a crewmember standing there, wearing a white shirt. He makes a hand gesture, obviously not aware that he’s currently on camera.

Beth knocks at the door of the cottage. Barnabas can see through the window on the door, but he asks “Who is it?” anyway.