“I’m putting myself in charge!”

You know, it’s been a minute since we checked in with faux-Egyptian firestarter Laura Collins and her insane plan to burn to death with her children, and then take off for some strange desert otherworld where the sun is always shining and everyone gets their own pyramid. It’s lucky that we stopped by today, because she’s got a new made-up deadline that she just made up.

Her son Jamison has stopped by; he’s run away from his terrible school to spend time with his terrible mother. He’s worried that his father will send him back to school, and she busts out with, “If I go away, then you could come with me. I must go, Jamison, soon!” Unfortunately, it’s one of those soap opera soons where it could mean the end of the episode but is probably more like two weeks from now.

Deadlines are kind of a cheap plot point in general, because obviously the writers can determine both how much time the character has and how long the thing the character needs to do will take. So you get a lot of climaxes where somebody has ninety seconds to do something that takes eighty-nine seconds, which is supposed to be exciting even though it’s basically just counting.

This is especially problematic on a soap opera, because the flow of time in a daily half-hour broadcast basically works any way they feel like. A hectic evening could take up four episodes, and then suddenly it’s late afternoon of the following day. But the characters all refer to last night as “the other night” because nobody expects the audience to keep track of the difference between real time and in-universe story time.

So when Laura says “I can’t stay much longer!” it’s like an episode of Mission: Impossible where they have to defuse a bomb with a readout that goes from “shortly” to “coming up next”. It’s not a nail-biter situation.

And it’s hard for them to express what Laura needs to arrange before she immolates herself and her children, because that goal is contrary to all human experience. Ra has granted her some extra life — this is the actual Egyptian sun god Ra, who gives a crap about this somehow — so that she can do this utterly pointless thing. She hasn’t done it yet for no specific reason, she’s been waiting for nothing in particular, and she needs to do it now-ish just because.

So here we are! Drama!

And here comes our hero, the Chromakey Kid, to put right what once went right but possibly in a different way. According to Barnabas’ crack-ass conception of space-time, Jamison didn’t die in 1897, because he grew up and had kids named Elizabeth and Roger. But Barnabas is here in a new iteration of the past, apparently, which means that maybe Jamison will die, unless Barnabas stops it, although Barnabas wasn’t in the past the first time around, and it’s much more likely that he’s screwing things up more than he’s helping. And that’s the television show that we’re watching at the moment, where it takes seven paragraphs to explain what’s going on, and it still doesn’t make a lick of sense.

So here’s another deadline to throw at you: If this storyline doesn’t end soon then I will lose my entire mind, and by “soon” I mean by next Wednesday at the absolute maximum.

Barnabas and Laura stand around and snipe at each other, in a high-stakes game of who can say the weirdest thing. They both win.

He picks up her golden scarab thing, and says, “Originally used, if I’m not mistaken, in the worship of the god Ra.”

She snatches it away, saying, “I don’t care about its history!”

“I don’t believe that,” he replies, which leaves us precisely nowhere.

Then they get into a taxonomy discussion.

“I know what you are,” Barnabas says.

“I am Jamison’s mother!” she snaps. “You are nothing but some incredibly distant relative! Yes, how distant — how distant, indeed! Someone should answer that question!”

“You can not divert me by attacking me.”

“A simple question is an attack? Please! Talk about yourself.”

And they just scowl at each other, and it lasts forever.

Meanwhile, Jamison has a fever, and it’s getting worse; apparently there are still several steps between here and “step into the fire.”

And so Barnabas is the hero of the day, because he decides to jump the turnstiles, and end this ridiculous standoff. He tells Laura that the boy needs a doctor, and she just keeps on scowling.

“I’m putting myself in charge!” he yells, and just walks over and grabs the kid. “And no more of your tricks! Remember, you have not known mine!” This doesn’t really mean very much either, but the point is that he’s leaving and he’s taking Jamison with him. 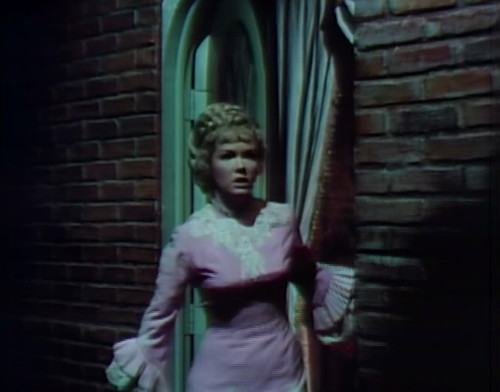 And Laura does the “stop, wait, come back!” thing that people always do on soap operas before the commercial break, when they should be chasing after the person, but they’re obligated to stay behind and do a facial expression.

“You’ll pay for this!” she shouts. “Before this night is over, I will see to it that you PAY!” So now we have a whole other deadline to deal with.

And guess what? The next thing you know, it’s morning, and she hasn’t seen to it at all. She’s just standing around in the Collinwood foyer, glaring at Barnabas’ portrait and being snippy with the help, and then she sits by the fire and asks the Great God Ra to intervene some more. I forget whether he does or not, it doesn’t usually matter either way.

I don’t know what I’m going to do if the storyline keeps going like this, I honestly don’t. Didn’t she say she was leaving soon? I wonder if I could get her to put that in writing.

Monday: I Know You Are But What Am I.

Beth tells Laura, “They won’t let you see him… evah!”

When Dirk opens the drawing room doors to find Laura by the fire, there’s a lovely clear shot of the boom mic, just hanging out in the middle of the room.

In act 3, Barnabas walks into Collinwood, and finds Quentin and Beth standing in the foyer. Barnabas tries to close the door behind him, but it swings open again.

In the final scene at the graveyard, Barnabas is supposed to be hidden in darkness while Laura and Dirk talk. He is not at all hidden in the not-at-all darkness.

Monday: I Know You Are But What Am I.