Crazy Jenny has been in the attic and out of her mind for a couple of years now, and to be frank with you, she’s sick of the whole experience. Her husband, the adorable antihero Quentin Collins, skipped town a couple years ago with his sister-in-law, Crazy Laura, and Jenny took it pretty hard. In fact, she’s gone entirely loco, in that unspecified way that people on television always do, babbling maniacally and ready to kill at a moment’s notice.

As it happens, Laura is also in a murderous mood, so she gets her new boyfriend, Groundskeeper Dirk, to let Jenny out of her cell, give her a knife, and point her in a Quentin-facing direction.

Obediently, Dirk supplies Jenny with a dagger that he’s selected from the random assortment of murder weapons that the Collins family keeps in every room in the house. But then he hears the boss coming, so he bundles Jenny into the drawing room and closes the door, which is pretty insensitive considering how she’s spent the last couple years.

Judith walks in and finds Dirk, who’s desperately trying to look like someone who didn’t just adopt a pet Tasmanian devil. She gives him a couple of cursory orders, but he’s finding it hard to focus.

Judith’s puzzled by Dirk’s odd behavior, but the servants at Collinwood are always distracted by one thing or another. We never see most of the people on the payroll, but they probably each have their own weird schemes going on that we don’t happen to see. I bet the cook is currently consulting her crystal ball to check on her late brother, the chauffeur, who’s been reanimated with the spirit of the upstairs maid. Meanwhile, the gardener scuttles through the back passageway on all fours, desperate to escape from that dream, that terrible dream! 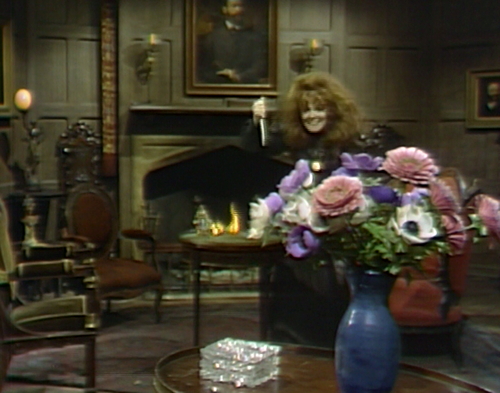 Meanwhile, Jenny’s in the drawing room, expressing herself. Hearing Quentin’s mocking laughter, she rushes around stabbing all the chairs, finishing off with the massacre of an innocent vase of flowers.

Now, just for the record, I’d like to point out that having your husband run off with somebody else does not typically bring on this level of murderous insanity. There needs to be some kind of pre-existing condition. If everybody got this crazy after a breakup, there wouldn’t be a stick of furniture left in the world.

And honestly, Dirk should know better than to put Jenny in a room with all this innocent decor. That poor vase was probably three weeks from retirement. 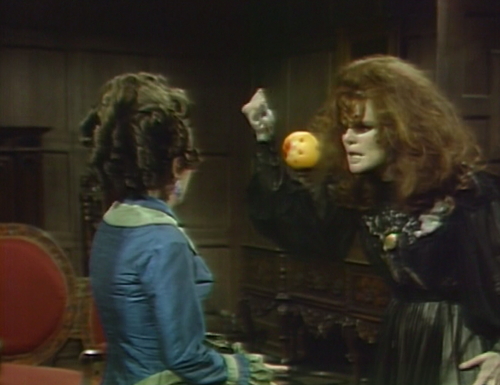 Judith walks into the drawing room and there’s Jenny, emitting a low, guttural chuckle like some unholy engine of war, and brandishing her dagger.

“Put my KNIFE down?” Jenny cries, like Judith’s never heard of the Second Amendment.

So she clobbers Judith over the head with a candlestick, which ticks off another box on the Clue murder weapons bingo card. Drifting off into the foyer, Jenny indulges in a little open-mic autobiographical storytelling.

“She lied to me,” Jenny sighs. “But I lied to her too — about who I am!” She looks directly into the camera, and addresses the audience. “My father was a KING of India,” she announces. “And my mother was a princess! And I am a princess! And when I raise my hand and say DIE, then of course, someone must DIE!”

I tell you what, Marie Wallace is value for money. She is an actress who leaves no stone unturned.

There’s a story that Marie tells about her DS experience in The Dark Shadows Companion: “I thought my crazy Jenny characterization was so different than I am. I mean, I put little rollers in my hair, ‘teased’ it, wore false lashes on top and bottom, shadowed my face — I looked unbelievably weird. And one day I was walking on 42nd Street and someone said to me, ‘Hey! You’re crazy Jenny!’ And I said, ‘How did you know?’ And she said, ‘You look just like you do on television!'” 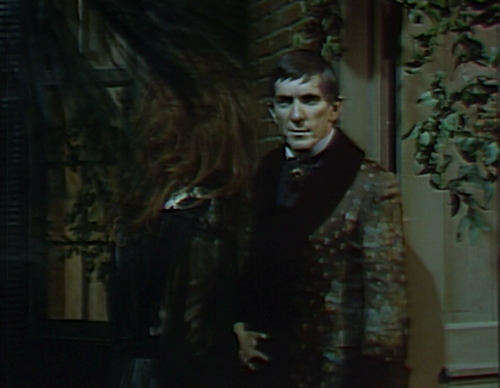 Jenny eventually drifts out of the house, still brandishing, and leaves the survivors to piece their shattered lives back together.

She decides to try her luck at the Old House, so she goes and knocks on the door. Barnabas answers the door and finds a knife-wielding psychopath, which is exactly the reason why you’re supposed to ask who’s there. I mean, imagine finding this level of mess on your porch. This is the kind of thing that could put you off entertaining for life.

He tells her that Quentin isn’t there, and she snaps, “Don’t lie to me!” He asks who’s been lying to her, and she sputters, “Edward, and, and, and, and, and that cold one — Judith! — and sometimes Beth, but not so much. What’s YOUR name?”

He tells her that he’s Barnabas, and asks who she is. “Jenny,” she answers, and his eyes light up, like there’s anybody else this could possibly be. They clearly need some new photos for the wanted posters. You need to be able to see this coming. 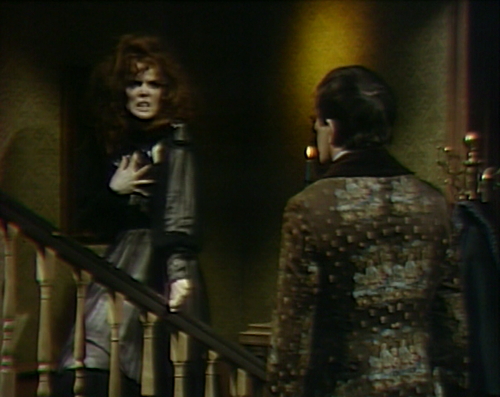 He invites her to come in and look for Quentin, because if there was a sanity requirement for walking into the Old House, you could go a long time between visitors. She looks around and doesn’t see Quentin, although she admits, “Sometimes he makes himself invisible.” Barnabas just kind of takes this in stride.

Now, the great thing about including the unstable on your television show is that they can recap an entire backstory and still make it interesting, as long as they do it loud and in the wrong order. Barnabas gets all kinds of intel out of this scene.

For example: Quentin married her before he brought her home to meet the family, and the family disapproved because she was a singer. She had two children, a boy and a girl, and the family took the kids away, because they were afraid that she’d harm them.

The marvelous thing about this sequence is that Barnabas is not scared of Jenny at all; he seems to find the experience refreshing, just shooting the breeze with the undiagnosed. At one point, she pulls her knife and tries to stab him. He takes the knife away from her, throws it into the fire, and says, “You see? No more knife.” He doesn’t even break a sweat. 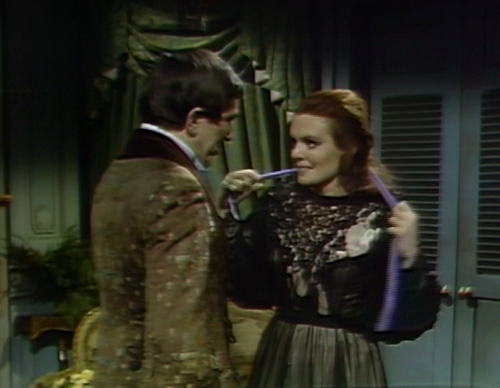 Barnabas brings Jenny upstairs to Josette’s room, where he encourages her to comb her hair, wash her face and put on a pretty dress so that she’ll be ready when Quentin comes. Then he walks out of the room and locks the door, satisfied with a job well done. Barnabas has great faith in the power of a makeover.

By the end of the episode, Quentin is at the door with a revolver, which means we’ve had three murder weapons from Clue in the same episode. Stay tuned for tomorrow’s installment, which will feature a wrench, a rope and a lead pipe.

Tomorrow: Rendezvous at the OK Corral.

When Jenny asks Barnabas, “What’s upstairs?” a boom mic comes into view at the top right.

Somebody coughs when Barnabas throws the knife into the fire.

Barnabas asks Jenny, “Don’t you want to wash your face, and comb your hair, and put on a pretty dress, so that you can tell him and show him how beautiful you are?”

There’s a studio light reflected in the mirror when Jenny checks herself out in Josette’s room.

While Barnabas writes his note for Magda, there’s the sound of a zipper.

When Quentin starts up the stairs at the Old House, the camera swings a little too wide, and you can see the back of the set.

Tomorrow: Rendezvous at the OK Corral.