“You are such a coward that the only way you can kill is with dolls!”

Ladies and gentlemen of the Dark Shadows audience, I would like to introduce to you a new member of our cast: slow doorknob.

Good ol’ slow doorknob actually made its first major appearance at the end of yesterday’s episode, because that’s where the career opportunities are, doorknob-wise. Let’s say you want to end an episode with an unexpected character at the door, but you don’t have the money to pay the actor just for the last two seconds. Who do you turn to when nobody turns up? A slow-turning doorknob, that’s who.

A twist to the left, a twist to the right, a couple rattles, a slow glide open, and then you cut to a cast member looking surprised, or horrified, or whatever actors are supposed to look like once you’ve stopped filming the fixtures. It’s kind of an IOU for the actual surprise, payable tomorrow. 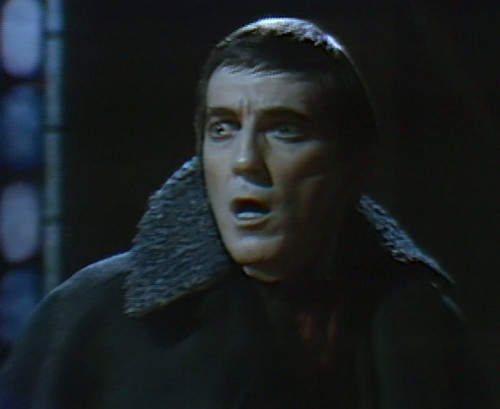 We’re in the tower room, by the way, I probably should have mentioned that. Also, it’s 1897. Barnabas got a hot tip from a knowledgeable gypsy that a terrible enemy was lurking up in the tower room, so he’s high-tailed it up there to get a good look. He found a deserted room with a bed and a busted-up doll head in the wardrobe, but he’s still pretty sure there’s an enemy somewhere, so he kind of slowly revolves for a while, waiting for the scene to start.

Then we get the slow doorknob sequence, and cut to Barnabas looking horrified, and that was yesterday.

As it turns out, at the beginning of today’s episode, the person at the door is… nobody. It just opens by itself, and then slams shut. Now Barnabas has to stand there and try to justify why he looked so astonished for no particular payoff. Go figure. 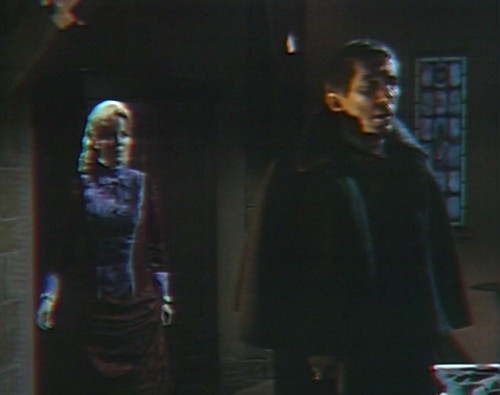 And then, from out of the shadows, here comes the wife of the party, Angelique. Ta-DAH!

Like Heather Locklear on Melrose Place, Angelique is the permanent Special Guest Star, the villainous soap vixen who was hired for a limited role in a specific storyline, and then nobody could work up the nerve to ask her to leave. Angelique has the amazing archenemy power to burst into flames, get sucked out an airplane window, fall from the top of the Empire State Building and get trapped in a time-locked TARDIS filled with angry baby tyrannosaurs, and still show up for work the next day.

You know, I bet if anybody was making Dark Shadows in 2015, Angelique would be there, living in a cave and still making speeches. There’s never a big finish for her, just an eternal big middle.

And this is the moment when Dark Shadows officially decides that Angelique will never leave Barnabas’ life, because the chemistry between these two lunatics is eternally story-productive. Observe the technique.

Angelique:  Aren’t you going to kiss me?

Barnabas:  You know the answer to that!

Angelique:  Other men embrace their wives when they haven’t seen them for so long.

Barnabas:  But you are not like other wives! The last time I was in this room — the last time!

Angelique:  Yes, you thought you were so clever. You and Ben Stokes. “Burn, witch!” 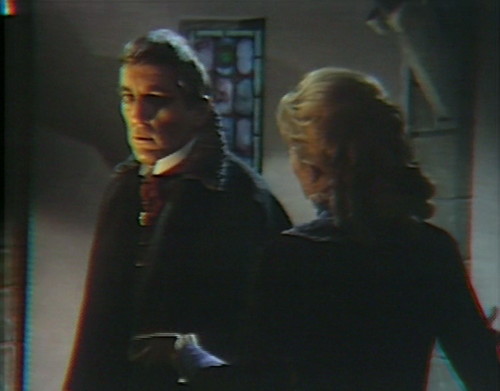 She circles him, spreading her hands.

Angelique:  But here I am. 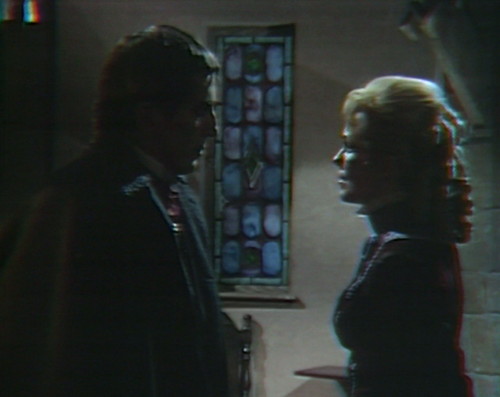 Seriously, I have never seen such a blatant ta-DAH moment in my life. God, I love Angelique.

Barnabas:  Then there is no way to get rid of you.

Barnabas:  If you do, I will use it, I promise you.

Angelique:  Love. Barnabas, your love would change me. Your love could make me anything you wanted me to be.

Oh, it’s gorgeous. There may be people who get tired of Angelique, but I am not one of them. 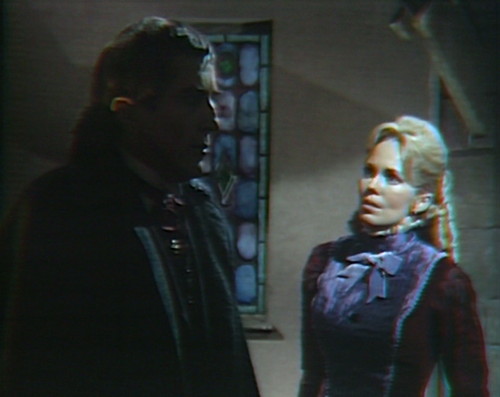 And they’re deliberately making this The Ultimate Epic Barnabas and Angelique Scene, where they review all the old business. You can tell that Jonathan Frid recognized how important this moment is, because he’s got a continuous seven-minute dialogue-heavy scene, and he doesn’t stumble or look at the teleprompter once.

Barnabas:  I hate to be ungallant, but looking at you, I see nothing but the misery that you’ve caused. The madness, the deaths!

Angelique:  And what do you see when you look in the mirror? Oh, but I forgot — you see nothing. So you are spared your conscience.

Barnabas:  No! I am not spared that.

Angelique:  You blame me still.

Barnabas:  Who put the curse on me?

Angelique:  For a reason!

Barnabas:  Because I could not love you!

Angelique:  Well, perhaps, you will learn to love me.

So they both understand it now — their permanent place in each other’s lives, and in the show’s unfolding narrative. They will never be free of each other. Also, “for a reason!” is one of the great conversational gambits of our time. 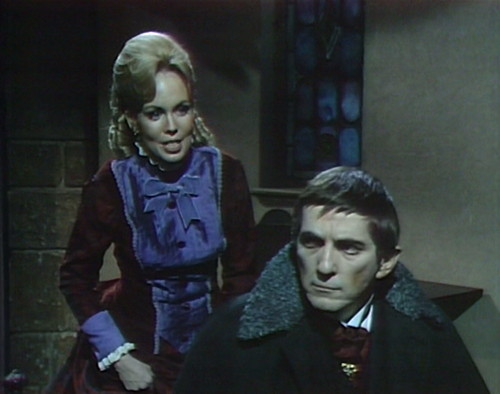 And then, because this is Angelique, they go ahead and find a whole new way to surprise us.

Angelique:  Quentin is quite curious about you.

Barnabas:  And I about him!

Angelique:  Quentin is a clever and dangerous man. Barnabas, how are you going to save David? How do you plan to solve the secret of the werewolf?

Barnabas (stunned):  You know that too? How? HOW?

Angelique:  You’re so surprised. Barnabas, I care about David. Don’t you remember, I knew him? I care for him as much as you do!

Which is absolutely not an answer to his question. How does she know? 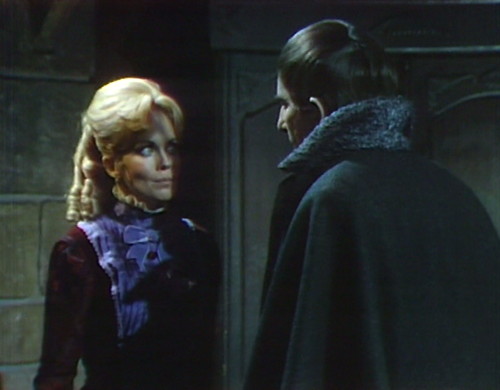 The answer, obviously, is that she knows what the audience knows. It would be child’s play to cobble together some kind of meaningless in-universe necrobabble explanation,  but the fact is that the Devil handed Angelique an episode guide, and that’s all there is to it.

She’s a kaiju, one of the giant monsters that rampage through Dark Shadows, knocking over buildings as they battle for the audience’s attention. The rules are different for the kaiju — they know all the secrets, and drive all the important plot developments.

And Angelique is especially important right now, because she’s the audience stand-in, who gets to flirt with Quentin and have passionate scenes with Barnabas. To prove that point, she now openly discusses everything that the audience is wondering about this time travel story.

Angelique:  You are going to need my help. How naive you are! Do you think you could come here to another century, and simply watch the action as if it were some play?

Barnabas:  It’s the only way I can find out what happened — why the ghost of Quentin Collins wants David.

Angelique:  But life will not go on here, as it did originally!

Barnabas:  Of course it will!

Angelique:  You are here now! You have already changed things! That governess — Rachel — she is already different because of you.

Barnabas:  But the end will be the same. Quentin will die as he died, walled up in his room.

Angelique:  Are you sure? Are you positive? Or will you change that too? Will David die, a victim of a cruel trick in time?

Seriously, it’s like she’s been listening to the conversations that the audience has been having all week when they meet up before homeroom. She’s read the episode guide, she understands her role in the show, and now she’s asking all the questions that we want to ask. 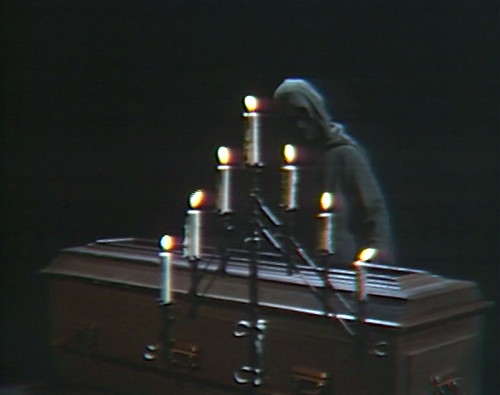 And she’s still not done with her fifth-dimensional extra-narrative showcase. They need a big finale for this sequence, so Angelique casts a spell, projecting a vision of what she says is Barnabas’ final day in the past. It’s another one of those avant-garde black box theater scenes, where the only objects on stage are a coffin and a candelabra. A silent, hooded figure enters, opens the coffin, and drives a stake into the unseen vampire’s heart.

So now Angelique is in charge of the “next time on Dark Shadows” teasers, and I don’t think they’ve even invented those yet. I think she’s the vice-president of ABC now. She might as well just reach through the screen and turn on your television, every day at 4:00. 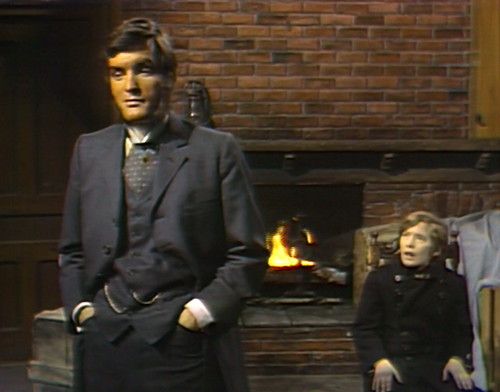 And that’s just act one! This episode is full of stuff like that. There’s an amazing backacting scene at the beginning of act 2, where Jamison — now standing in for the young set — stares in open-mouthed wonder as Quentin drops some more backstory on us.

Jamison:  You don’t know any more about being a spy than I do.

Quentin:  Oh, indeed? I was one, once. Not so very long ago.

Jamison:  Were you really?

Jamison:  Tell me about it!

Quentin:  It’s not a story for young ears.

Jamison:  Well, can’t you even tell me where?

Quentin:  Egypt. Alexandria, to be precise.

Jamison:  Who were you being a spy for?

Quentin:  As much as I hate to admit — the police.

Jamison:  Why? Why were you their spy?

Quentin:  I told you not to ask questions!

I’m not entirely sure that he did, and he’s the one who brought it up in the first place, so whatever, but “stop asking so many questions” is writer’s code for “I have given the audience all of the foreshadowing that they need right now.” 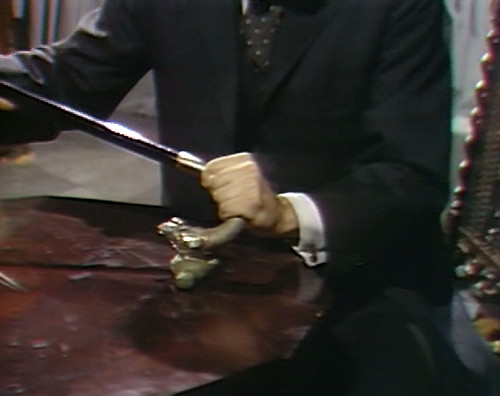 Besides, Quentin has other things on his mind, like projecting a black magic voodoo curse on Barnabas, using Jamison as the mouthpiece for Baal, who Quentin can apparently summon in less than sixty seconds with a three-sentence ritual and without even lighting that many candles.

Why does Quentin suddenly know how to do that? Because he’s a kaiju, that’s why, and the giant monsters can do anything they want, as long as it’s interesting and advances a plot point. 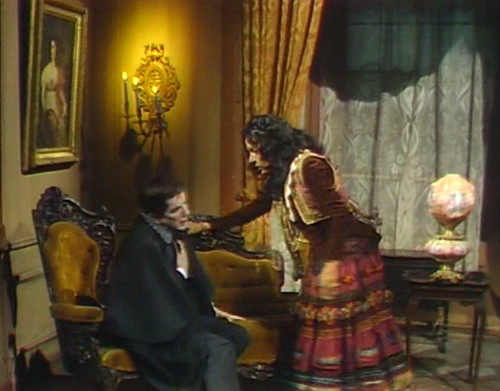 Oh, and Julia’s in this episode too, which completes our set of the four A-list kaiju.

I think this is the point where I’m just going to go ahead and treat Magda and Julia as the same character. Magda was terrified of Barnabas two weeks ago, demanded payment last week, and now, she’s protecting him and getting furious when somebody tries to hurt him.

Barnabas is the inhuman monster who turned Magda’s husband into an obedient blood slave. When she sees him struck down with a bad case of karma-approved voodoo, she should be smiling and taking pictures with her phone. Instead, she races to the cottage to confront Quentin, because the kaiju are magnetically drawn to each other across time and space and logic and set design. Magda has the Julia role now, and she’s even played by Julia with a wig on, so let’s stop pretending. This is a thing that only Julias do.

So this is the first time we’ve seen the four most important kaiju on the same day — Barnabas, Julia, Angelique and Quentin. Now all we need is Professor Stokes, Reverend Trask and the werewolf, and this would be the perfect Dark Shadows episode.

The usual Angelique’s laughter problem crops up again — her laughter is heard on the soundtrack, and it’s still going when she appears on screen, not laughing.

Norman Parker plays the hooded figure in Angelique’s vision, the first of five appearances on the show. The other four are in October 1970, when he’s a stand-in for Judah Zachery’s headless body.

By my calculations, there are 12 episodes in the series to include Barnabas, Angelique, Quentin and Julia, if you include gypsies, Parallel Time analogues and Quentin’s identical great-uncle Quentin, which I do. Episode 1015 in May 1970 only has those four. A month later, episode 1031 has all four of them and the PT version of Stokes, plus that episode has two Julias in it. It’s nice to have something to look forward to. 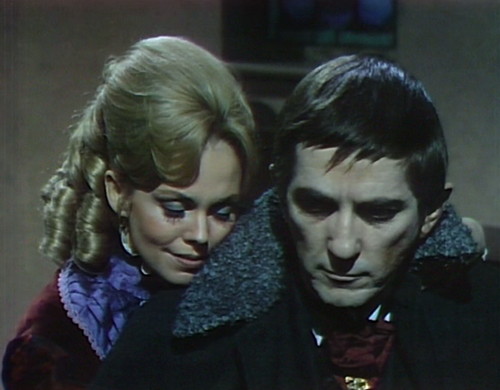