“He’s the one who made the raven rave.”

I’m away this week, probably in Bangor or Boston or someplace. But if I leave you alone for too long, you’ll probably invite clumsy occult experts over and let them wander about the house, waving their hands in the air and talking about the letter M.

So in lieu of actual episode posts this week, I’m filling in with selections from Paperback Library’s novelty joke book, Barnabas Collins In a Funny Vein.

It’s a strange little artifact, as we’ve seen. Once they run out of puns about ghosts and blood banks, which happens almost immediately, they decide to turn Barnabas into The Addams Family, which is a completely different aesthetic.

The Barnabas that we know — the one from TV’s Dark Shadows — is perfectly fine with murdering just about anybody who crosses his path, because killing people is rewarding and super easy to do. But he doesn’t go out of his way to appreciate other people’s suffering, decking the house with nooses and electric chairs, Addams Family style.

The Earth-2 alternate Barnabas of Barnabas Collins In a Funny Vein is absolutely devoted to the enjoyment of death, misery and destruction for its own sake. Also, he has a pet octopus.

Why does Barnabas laugh when he reads the paper?
Because he reads only the obituary columns.

Does Barnabas like poker?
He likes a hot poker.

What did Barnabas buy as a birthday present for his pet octopus?
A coat of arms.

How is Barnabas’ car different from other cars?
It has windshield vipers. 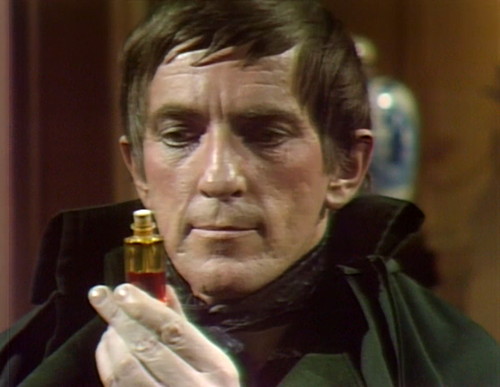 I mean, seriously. What do some of these even mean?

When Barnabas was in school, did he eat in the school cafeteria?
No, he ate in the bacteria.

Does Barnabas ever drink milk?
He does. He likes every kind of milk except the milk of human kindness.

Does Barnabas believe in reincarnation?
Actually, he doesn’t. He believes in reincremation.

What does Barnabas think about Poe’s poem “The Raven?”
He likes it. He was the one who made the raven rave.

At the zoo, what does Barnabas like to look at, other than snakes and man-eating tigers?
He likes to go to the Bear House and look at the grisly bears.

Here’s some that must be straight out of an Addams Family script:

Was Barnabas’ father a vampire? No, he was an African explorer and died in bed. In a bed of quicksand. He wanted his son to follow in his footsteps.

How is Barnabas making some extra money?
He’s taking ashes from a crematorium and seling them to cannibals as instant people.

What sort of furniture does Barnabas have?
He has an electric chair for reading. He likes a strong light and the chair is wired for it.

Barnabas has draperies all over his walls, in addition to his windows. He just gets a kick out of hanging things.

Why did Barnabas get thrown out of the department store when they had a fire sale?
He wanted to buy a real fire.

Does Barnabas ever bite his nails?
Not unless they bite him first.

Is Barnabas an artist? If so, what does he like to draw?
He likes to draw and quarter.

I’m not sure that some of these are technically jokes:

Does our favorite vampire like birds?
Yes, he likes birds of prey.

Why is Barnabas so fond of winter?
He’s always happy that time of year, because he sees so many horses and slays.

Does a vampire trust people?
Barnabas says he always takes people at their deface value.

What happens when Barnabas’ wife shoots at him?
She uses her maiden aim.

And so, in pure desperation, Funny Vein dispenses with the vampire theme and just steals jokes from old vaudeville routines.

Did Barnabas always want to be a vampire?
No. When he was young he wanted to be a tree surgeon, but he could not stand the sight of sap.

How did Barnabas make Joan of Arc mad?
I don’t know, but she sure was burned up.

What does Barnabas think of Joan of Arc?
As far as he’s concerned, she was the toast of France.

What did Barnabas tell his guests about Joan of Arc?
He told them she was the first French fry.

Does Barnabas like bathing beauties?
He doesn’t know. He’s never bathed one.

What does Barnabas think of chicken soup?
He thinks chickens will love it.

I hear Barnabas has found out what causes forest fires. Is that true?
Yes. He says they’re caused by trees.

Okay, it’s almost the end of the week, and you might think that this is the lowest that Barnabas Collins In a Funny Vein can go. Just wait until tomorrow.

Tomorrow: Why Did Barnabas Sell Fangs for a Dollar?

9 thoughts on “X4: Does Barnabas Ever Drink Milk?”