“Would you want to see a sister of yours, if you’d been responsible for everything that had happened here?”

“There is one possible explanation,” Barnabas says, as he paces the drawing room thoughtfully. “The man turned into an animal.”

And you know what? He’s right. That is the only explanation that anyone considers. Nobody else even tries.

Barnabas and Julia are hanging around in the drawing room of somebody else’s house, coming up with absurd hypotheses. “Oh, don’t be amazed, Julia,” Barnabas says. “There is a precedent for this, you know.” He never gets around to explaining what that means. It’s that kind of conversation.

The Junior Detectives are putting their heads together, trying to get to the bottom of the recent rash of mysterious animal attacks. Barnabas notes that the attacks started around the time that Chris Jennings moved to town, and the first person killed by the beast was the clerk at the Collinsport Inn, where Chris was staying. They don’t mention that they both saw the animal last night, and it was clearly wearing shoes, but you can’t think of everything.

Barnabas:  You yourself said that you thought that his attitude towards Amy was strange.

Julia:  Yes, I had to practically force him to go and see her at Windcliff.

Barnabas:  Would you want to see a sister of yours, if you had been responsible for everything that had happened here?

Julia doesn’t respond to that, because what can you even say.

Instead, she shoots him a series of meaningful looks.

Julia:  We must be sure, before there’s another murder.

Barnabas:  It may not be too difficult. We should know tonight.

Barnabas:  The moon will be full, and the man will become a wolf again.

And then there’ll be another murder, presumably, but I guess that’ll make them doubly sure.

Meanwhile, in the other room, Chris and Amy are having their own weird conversation. Here’s a sample.

Chris:  I found the shirt in the fire. Why’d you do that?

Chris:  I know it was dirty, but we can’t go around burning all our dirty shirts.

You see what I mean? It’s a big day for weird conversations.

Then Carolyn comes in with a woman we’ve never seen before, and god damn it, she’s wearing a red shirt. Seriously, somebody needs to have a talk with the day players.

Carolyn says, “This is Donna Friedlander, she’s spending the day with us,” and the conversation goes downhill from there.

Carolyn:  I’ve been showing Donna the house, although I can’t find it all that fascinating.

Donna:  Oh, it is — you know it, Carolyn. I’m studying interior design. And honestly, Carolyn, I have never seen antiques like this before. This house is practically a museum!

So apparently today is the day when everyone’s decided not to talk like a human being. Well, I suppose it’s up to them.

Chris thinks that he sees a pentagram on Carolyn’s face, which upsets him, and he decides that the most appropriate thing to do is to walk across the room, turn his back on everybody and pretend to look out the window.

Carolyn offers to show Donna the drawing room. On their way out, Donna says, “See you later, Chris,” and Chris says, “Yeah. We probably shall.”

And that, apparently, is enough for Donna.

Donna:  Wow, he is something.

Carolyn:  What do you mean?

Carolyn shrugs, “Yes, he certainly is that,” and heads for the drawing room. I don’t know who let Donna off her leash for today. I had no idea this was what interior design students were like.

But the theme of the show today is that the only thing more scary than being ripped apart by a ravenous wolfman is interacting socially with other people.

On the whole, the Dark Shadows characters have become kind of remote lately; the recent emphasis on action and spectacle means that we don’t get a lot of “night out at the Blue Whale” scenes anymore.

It’s getting late by now, and Chris needs to leave before the moon rises. But he makes the mistake of walking past the drawing room as everybody’s having tea, and this gives the Junior Detectives a way to turn this pleasant afternoon into a trap. 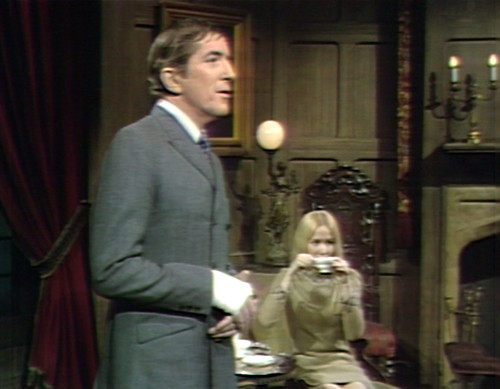 “But, Chris, you’re always running off,” Barnabas says. “I was just about to invite Carolyn’s friend over to the Old House.” Then he pretends to get an idea. “I have it, Julia! Why don’t we have an impromptu dinner party there. All of us, tonight!”

Julia grins, “Why not? I think that’s a good idea,” and Donna and Carolyn agree, so now Chris is on the hook.

Chris takes one look at Donna, and he does what any sensible person would do — he takes a deep breath, and fills the world with words.

“I really can’t,” he says, “I have to go to Bangor, you see, I have to meet this guy there tonight, he’s flying away in the morning, and I’ll be lucky if I can catch him for an hour tonight, it’s business, it’s not the kind of thing that I can easily cancel, I was just about to leave right now.” 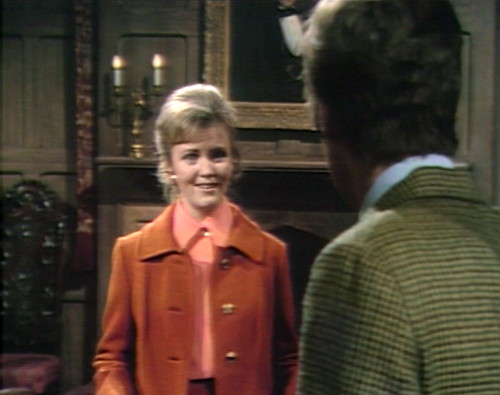 And he’d probably have spun that explanation all the way to the front door, but he didn’t account for Donna’s determination to be a social boat-anchor.

It turns out she’s going to Bangor too, and she was dreading the bus trip. This is a coincidence, because I expect the bus trip was feeling the exact same way about her.

For some reason, Carolyn is entirely in favor of having her boyfriend acting as chauffeur for another girl; she says that Chris would be delighted to have some company on the trip.

And I have to say, I’ve been harsh about Chris’ inability to control his serial killing, suggesting that maybe after several murders, he might want to look into expressing more than a general “oh, for gosh sakes” show of remorse.

But right now, I have never felt more sympathy for Christopher Jennings. Haven’t we all been stuck with Donna on a car trip to Bangor, in one way or another?

And it just gets worse as they head outside.

Chris:  It’s just here by the gate, there’s no way to park it down by the cottage.

Donna:  Do you live on the estate?

Chris:  Yeah, just down that path over there.

Donna:  Oh. Is it an old and interesting house, too?

It’s a nightmare. I mean, Chris wakes up in a pool of blood and body parts a couple times a month, and even for him, this is a nightmare.

Desperate, he tries the old headache trick, but this broad refuses to take a hint.

Chris:  It’s just that I’ve got this headache, you see, I get them all the time, it’s kind of like a migraine, I’ve just been thinking that I may not be able to go, after alll —

Donna:  It’ll be over by the time we get there.

Chris:  Oh, I know these headaches of mine, they just last, you know, there’s nothing I can do but try to get through them. Uh, why don’t you just take my car, and go on?

And then he actually takes his car keys out of his pocket, and hands them over. He is literally giving away his car in order to ditch this woman. It’s like biting off your own leg to get out of a bear trap. I have lost so many cars this way.

Clearing away the tea things, Carolyn gives Barnabas and Julia the 411 on Donna.

Carolyn:  I don’t really know her that well. She’s always been nice. Too nice, I sometimes think. She behaves as though we’re the best of friends, which we’re not.

And then she walks away, leaving Barnabas and Julia to reflect on the annoying young woman who they smiled and waved at, as she strolled happily towards her inevitable destruction.

So, you see what I mean about social interaction? Thank God we have the internet now. 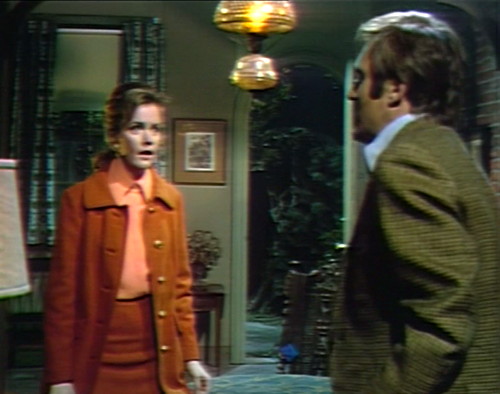 Donna shows up again, of course, they always do, knocking at the door of Chris’ cottage just before moonrise. She’s brought him the car keys, and she wants to use the phone, and then she starts talking about the cottage, and he starts screaming at her to get the hell out of his goddamn house, and then she philosophizes for a while about the kind of guy he must be, and it all ends in pain and blood and a terrible silence.

Still, it’s better than that impromptu dinner party would have been. You know what I mean?

Just after posting this entry, I got an email from reader Joe Hart, with the following picture. There was a Dark Shadows Cast Reunion in Norwalk, Connecticut last weekend, as a fundraiser for Lockwood-Matthews Mansion, a filming location for House of Dark Shadows. This picture shows Joe with four of the guests at the event, including Beverly Hayes, the actress who played Donna in today’s episode.

So it’s a relief to know that werewolves and Windcliff couldn’t keep these nice folks down. Thank you, Joe!

Barnabas’ right wrist is wrapped in bandages today. It’s not a story-related injury, so Jonathan Frid must have gotten hurt.

The reprise in the teaser is very different from the end of the previous episode. The dialogue is more or less the same, but Chris sounds much more angry, and the blocking is noticeably different. Also, Amy isn’t wearing a jacket anymore.

Amy asks Chris, “Why were you standing there looking at me, frowning at me?”

Amy’s book is called Colonial Life in America, but she tells Chris that it’s the story of one of the Collins ancestors, a little girl who grew up in a big house.

Carolyn tells Chris that she’s been showing Donna the house, but she doesn’t know why it’s so fascinating. Donna replies, “Oh, it is! You know it, Donna — Carolyn.”

Donna is played by Beverly Hayes, in her only Dark Shadows appearance. She also appeared in some other soap operas — A Flame in the Wind, The Edge of Night, and The Secret Storm. This is her last television credit, but she came out of retirement in 2010 to play a small part in the film Marathon. Now in her early 70s, Hayes has written a couple of short films, and worked as script supervisor on a couple others. 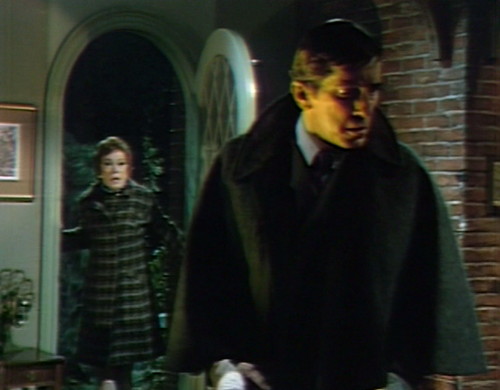