“She did have to undergo the hanging, yes.”

Sorry, spoiler alert. I always forget to say that. Sorry!

Still, this hardly counts as a news item anymore. VDub has tried to leave the show twice now, and they keep on dragging her back on screen. A few weeks ago, she disappeared from Collinwood, traveling back to 1796 to reunite with her husband Peter “Jeff” Bradford-Clark. Then she found out the authorities still wanted to execute her for witchcraft, so Barnabas had to cross the barrier of space and time in order to save her.

Unfortunately, Barnabas arrived too late to stop the execution, which makes you wonder why he chose to shatter causality just to show up at the last minute. And now here’s Vicki, freshly hanged and laid out to dry.

Today, the sorcerous soap vixen Angelique stands over the body, and says a bunch of words about putting Vicki under a spell, and now Vicki’s going to be buried alive. Angelique is super into burying people alive these days, even though it sounds like a damp fizzle of a story point. It’s like an annoying song that’s stuck in her head, and she can’t shake it.

And hey, you know what would be great to see right now? David Selby.

I started this week being generally enthusiastic about this storyline victory lap, which has been an opportunity for the production team to figure out how they can recapture the creative spark that sputtered out over the summer. But this is day four, and they’ve already learned everything that they’re going to get from this, and suddenly it feels like we’re trapped in orbit around a story point that we already resolved ten months ago.

So now I’m wondering what that nasty ghost of Quentin Collins is doing right now. If it was up to me, I’d go back and check, but it looks like we have to spend some more time hovering around this deceased governess.

Tell me, honestly: Am I consigned to this time forever, as a punishment for the mistakes I made in the past? I don’t feel super consigned at the moment, but maybe it’s the kind of thing that sneaks up on you. 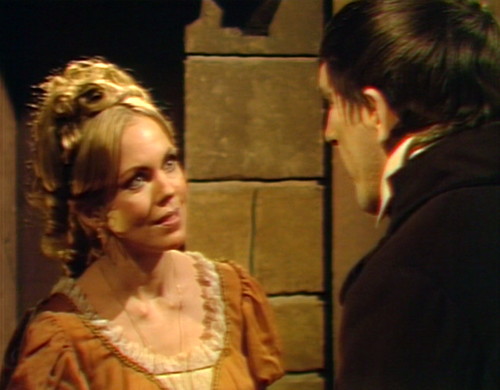 Anyway, Angelique goes up to the tower room to give Barnabas the same old sales pitch that she always uses — she’ll do a thing that Barnabas wants, if he’ll agree to live with her as her husband for the rest of time. She’s done this a dozen times before, and it’s never worked, but she keeps at it.

I love having Angelique on the show, because she’s a dedicated plot twist generator, but I’m looking forward to the day that they come up with something different for her to do, so that she isn’t just recycling speeches that she’s made a dozen times. This will happen someday. Today is not that day.

But Barnabas has something up his sleeve this time.

Angelique says, “If you refuse to trust me, she will die — the most horrible death imaginable!”

He marches over to the door, puts his hand on the knob, and shouts, “No, Angelique. It is YOU who must face destruction!”

And look what’s behind door number one — it’s Ben, carrying a torch!

“You will die by FIRE,” Barnabas shouts, “the death you deserve!”

Angelique shouts “NO!” as Ben rushes over and smacks her with the torch, and I have to admit, I did not see that one coming. 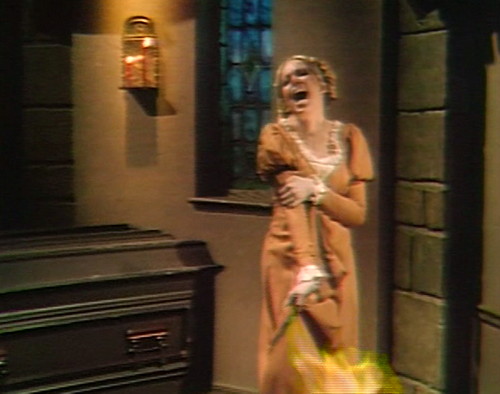 It’s an exciting, noisy moment, a healthy slice of sadistic revenge on a Friday afternoon. Ben waves the torch around, and yells, “BURN, witch! BURN!” And that’s exactly what she does.

The evil witch dies, cooked to a crisp in a psychedelic blur of video effects and flame, like a Crazy World of Arthur Brown music video, and that’s the end of her.

So that was easy. Why didn’t they do that a long time ago?

Now that the woman who can appear and disappear whenever she wants and was already a ghost anyway has been ignited and dismissed, the spell is broken, and it turns out Snow White is alive after all. 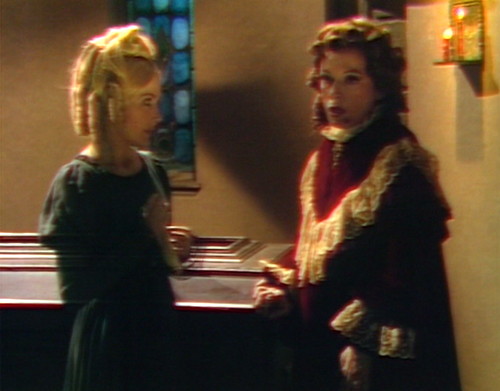 And I’m sorry, I know this post is kind of under-written today, but I just can’t get super excited about what’s happening right now. It’s the second in a string of five consecutive Ron Sproat episodes, and it’s getting to me already.

We’ve already char-broiled Angelique and restored the lost princess to life. When can we leave the 18th century?

Honestly, at this point, my main concern is that if we stay in this time period, eventually Danielle Roget is going to show up and seduce a jailer, so that she can grab the Collins family history book and skedaddle back to November 1968. Then she’ll try to stop Jeff and Vicki from getting married, and Adam will kill Eve, and Vicki will use Jeff’s wristwatch to travel back into the past, and we’ll be stuck forever in a chronic hysteresis.

Part of the problem is that they’re not really taking this entirely seriously. The B-plot for today is that Natalie sees Barnabas leaving the tower room, which is a big deal because she knows that he’s dead. No one must ever be allowed to learn this terrible, dangerous secret. 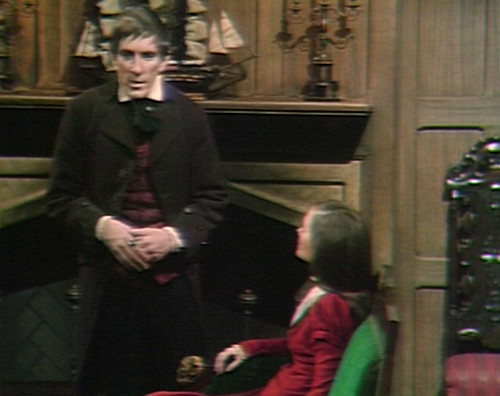 Except here he is in the drawing room, making speeches about how great it is that Vicki’s recovered.

This did actually happen in the last couple days of the 1795 storyline. Naomi killed herself when she found out that Barnabas was still walking around, and in the next episode, Barnabas and Joshua had a conversation in the drawing room. I let it slide at the time, because the break between one episode and the next kind of obscured the inconsistency, and besides, it was a really good scene.

But this episode cuts directly from Natalie’s expression of horror straight to Barnabas standing in the drawing room and saying, “It’s a miracle!” Sometimes I think Ron Sproat is trying to drive me out of my goddamn mind. 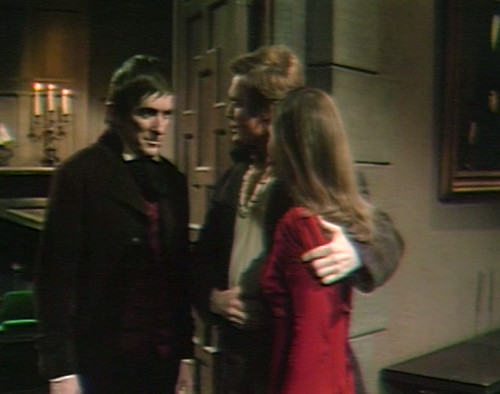 Anyway, it’s a nice little moment. Barnabas says goodbye to Peter and Vicki, and he’s happy for her, which is a first for the character; he’s actually thinking about someone else’s feelings for once. He might have a shot at being a grown-up after all.

Vicki and Peter ride off into the sunset, which is the only happy ending that anybody on Dark Shadows ever experiences, because Dan Curtis was hoping that Alexandra Moltke would come back and play Vicki again someday. It’s a sentimental ending for a character that Dan felt sentimental about. I know that they’ll screw it up with a sour retcon a year from now, but at least for today, the story of Victoria Winters is finally complete.

Now that Vicki’s off TV for good, Barnabas can head back to 1969 with a clear conscience. He walks out into the woods with Ben, and proceeds to enact one of the strangest scenes in the history of the dramatic arts.

Barnabas didn’t get all the way to the late 18th by himself; he stood next to a grave and asked the spirit of Peter Bradford to open the way for him. That’s not a typical ghost request, but it worked, so fine.

But now Barnabas is trying to go into the future, and he expects the same kind of service. He goes out to the woods, to stare off into the infinite and ask Julia for a ride home. Ben asks who Julia is, and Barnabas ducks the question, because otherwise he’d have to explain that Julia hasn’t been born yet, so how can she even. 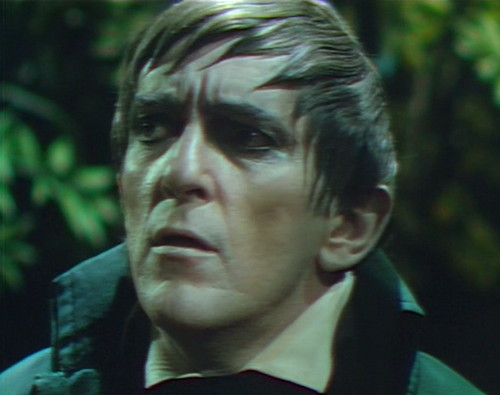 Here’s what he says, in case anybody has an audition coming up and you’ve misplaced your copy of 99 Scenes for Young Actors with Brain Damage.

And then he shakes his head, and says, “I don’t understand what’s happening!” which makes two of us. So if you ever want to know how to not travel into the future, then that’s how it’s done.

Then he’s struck with an idea: “Perhaps the past must continue as it did! Perhaps she’s supposed to find me, as Willie found me!”

And, as usual in this five-year long game of Calvinball, anyone who says something in that tone of voice gets to make up a new rule. Sproat is now updating his bonkers plot contrivances through telepathy. 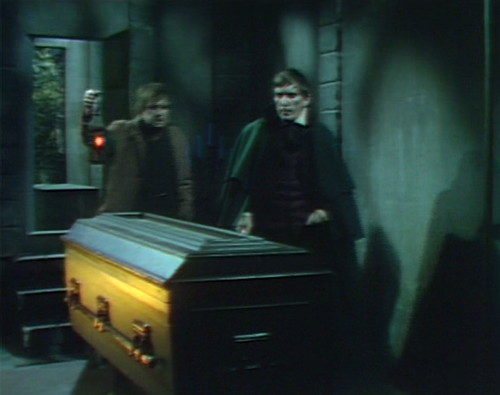 Clearly, the future has rejected us, and we’re trapped in an endless time loop, consigned to relive these episodes over and over, for eternity. The storyline will never move ahead, and David Selby will always remain a promising might’ve-been, perpetually just out of reach.

If there’s any hope for us at all, then Barnabas needs to climb back inside the mystery box. At long last, for all our sakes, Barnabas Collins Must Die.

Angelique admits that Vicki was hanged, and Barnabas shouts, “Then how come you say you didn’t betray me?”

Vicki says, “Can I be alone for — with him for a moment, Peter?”

Barnabas tells Ben, “Make sure that no one ever destroys, or disturbs my final rest.”

A little trivia note: This episode has eight speaking parts, which is very unusual — the cast is typically limited to five or six actors. There are only 12 episodes in the series with eight or more speaking parts. The last one was episode 271, when Liz interrupted her wedding to announce that she murdered Paul. We won’t get to the next one until episode 1039, in June 1970. 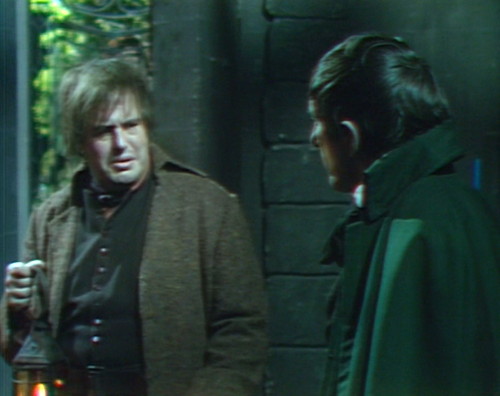