“It doesn’t necessarily mean something.”

David and Amy, two young kids prowling the halls of the enormous haunted house where they live, are currently the subjects of an escalating struggle between two ghosts — Quentin, who wants to lure the children into a sinister scheme, and Magda, who’s trying to protect them. So far, we haven’t actually seen or heard either of these spirits, and there’s still a chance that this might all turn out to be one big misunderstanding.

The kids make their way through a secret passage to the west wing, where Quentin is silently urging them to go. Suddenly, a busted old grandfather clock tips over, and faceplants right in front of them with an unholy clatter. 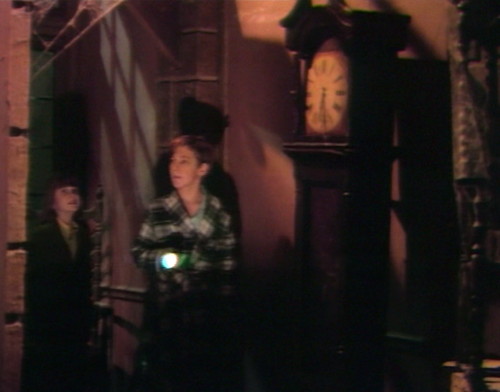 So here we are in the second straight episode by Ron Sproat, my least favorite Dark Shadows writer and the man who seems absolutely determined to crush my blog with a grandfather clock. As I discussed in “The Last Days of Ron Sproat“, there has been a fairly intense battle for — well, if not for the soul of the show, then at least for the pace. Sproat likes to keep things nice and slow, and apparently that includes his exit, which is coming pretty soon but not soon enough.

Sproat’s influence is fading considerably, but it’s still a couple months before they finally pick him up by the scruff of the neck and toss him out into the streets.

Right now, there are thirteen more Sproat episodes, counting this one, although why I should bother to count this one is a little hard to figure out.

Because this is exactly the kind of episode that Sproat maddeningly insists upon, where characters wander in packs, roaming aimlessly back and forth between whatever sets they’ve currently got available, saying essentially nothing worth listening to.

For example, try this dialogue on for size:

Amy:  Who could have locked the door?

Amy:  Maybe it was Quentin.

David:  Why would Quentin lock us in here?

Amy:  Because he wants us to stay here.

David:  Then why won’t he appear to us?

Third base! You see what I mean? The whole episode is like this.

But this is what happens when you let Sproat write an episode, every goddamn time.

David:  I hope we don’t have to stay here the whole night.

David:  Ghosts only appear at night, Amy. Everybody knows that.

Amy:  You mean, we might have to stay in this room all night?

Amy:  I don’t want to stay in this room all night!

And then Carolyn wakes up screaming. I don’t blame her, I would do exactly the same thing.

Liz and Roger rush in to see what all the noise is about, and Carolyn tells them that she just had a dream about David and Amy, and a woman saying, “They’ll die.” Everybody tells her it was only a nightmare, but she insists, “It was more than a dream. It was too vivid to have been a dream.”

Personally, I can’t remember the last time I had a feeling about where David is. Maybe I’m insensitive.

Then they all look in a mirror while an unseen hand writes the name JAMISON on it. This is a nice visual moment, and a good special effect, but there’s kind of a smothering Sproatness about it all that makes it difficult for me to get into the spirit of things.

I’m watching this scene, and all I can think is, what a thoroughly unhelpful clue. This is Magda, desperately trying to communicate that David and Amy are being lured up to a secret room in the west wing, where they’ll be killed by a vengeful ancestor named Quentin.

That’s not an easy concept to get across in mirror writing, but honestly, Magda doesn’t even come close. You’d need to be pretty far along in explaining this scenario before you get to the word JAMISON.

So here I am, as always, six minutes in on another twenty-two minute journey through Sproatland, and already I’m giving advice to the special effects. I shouldn’t have to backseat drive the episode like this. We need to work out a better system.

Anyway, let’s check in with the kids, and see if they’ve gotten anywhere.

Amy:  What are we going to do?

Okay, that’s a negative. I wonder what the adults are up to?

Well, they’ve made it to the foyer, that’s something. By now, they’ve searched through the basement and looked in all the rooms, except for the west wing. 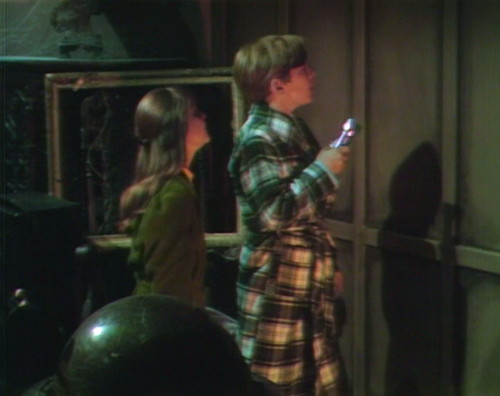 Okay, back to the kids. David and Amy are still messing around in the storage room when they hear a haunting melody, coming from behind the wall. It sounds like an old-fashioned waltz that by next summer will hit #13 on the Billboard Top 40, which is an incredible coincidence because that’s exactly what it is.

Amy:  Why is Quentin playing that music?

Amy:  Why doesn’t he just appear to us?

Amy: How can we? We can’t go through a wall.

David starts knocking on the wall.

Amy:  What are you doing?

David:  That sound — that hollow sound! It means this wall isn’t solid. 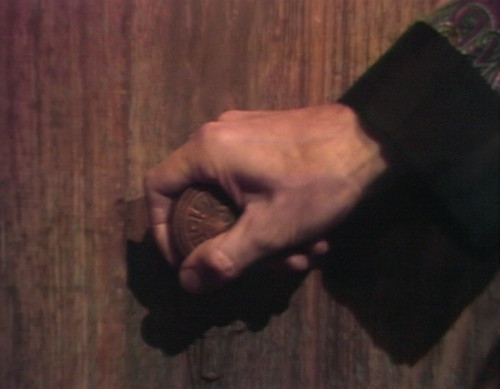 They cut away to Roger, who’s rattling a doorknob, but we still hear David talking from the other set.

“There’s some kind of space behind it,” he says, and then I guess somebody clues him in that he’s skipped ahead in the script, so he pipes down.

Roger says the door to the west wing is locked, so the kids can’t be there. Carolyn disagrees, on account of she has a feeling, but the others vote her down. I guess that’s why they have to stick together in groups of three, so they have a tiebreaker.

Roger walks down the hall, saying, “Come on, we’re wasting time,” as if that was a serious issue in this episode.

Now we rejoin the scene in the storage room, already in progress.

David:  Maybe he can’t! Maybe we must go to him!

Yup, they just go right ahead and start the scene over.

And then he starts knocking on the goddamn wall all over again.

David:  That hollow sound! That means that this wall isn’t solid!

David:  No! There must be some kind of space behind it!

This leads to another scene of Liz, Roger and Carolyn, who are still squabbling over whether they should search outside or not, which means that we’re stuck in a time loop again. It feels like we’re always getting stuck in a time loop these days, although I suppose that’s the whole point.

So guess what, Carolyn has a feeling. She feels a hand pushing her toward the door, which according to her means that Magda wants them to go and search the west wing, which coincidentally is the same place that Carolyn’s been saying that she wants to go this whole time.

Now, I don’t know about you, but I’m starting to resent having everybody getting pushed around by unseen forces today. I think if Magda wants to be in charge of the episode, then she ought to show up and do it in person.

Walking through the west wing, Carolyn, Liz and Roger take a moment to survey the recent clock carnage. Roger is surprised; the clock was standing up the last time he was up here.

Liz says, “It doesn’t necessarily mean something,” and Roger says, “No, I suppose not,” which is about as neat a summary for this episode as you could find. 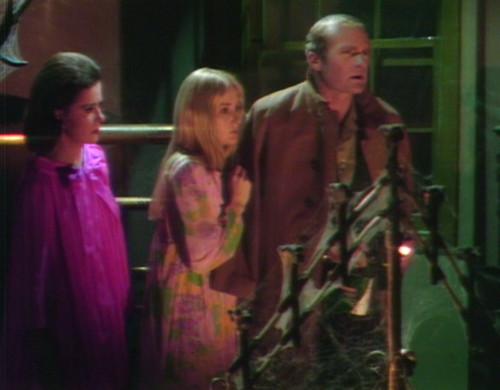 And so our intrepid adventurers finally make their way into the room that David and Amy are actually currently in, except they’re hiding behind a trunk. Liz thinks that she hears a noise from the other room, so they leave and go check it out.

Meanwhile, on the astral plane, Magda rolls her eyes and says, maybe I should try to find another family to help. 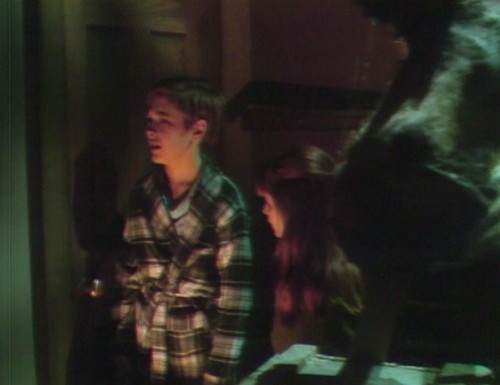 Carolyn pulls the door shut behind her as they leave the room, and David and Amy come out of hiding to check if the door is stil locked. It turns out that it is, because this episode is a Möbius strip. Then they start talking about the wall again. 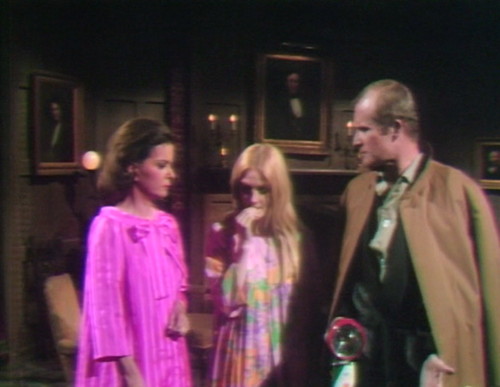 “Well, that was a waste of time,” Roger says, as they get back to the drawing room, and Carolyn says, “I still have a feeling they’re somewhere in this house.” Etcetera. 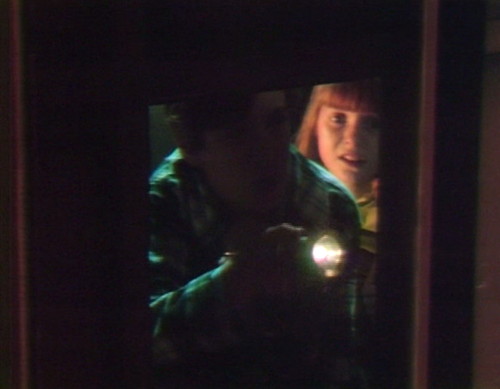 Finally, the kids take a crowbar and bust their way through the wall, and there’s another room behind it. They decide to go through into the next room, and then the episode is over.

And that’s one more Sproat episode down, with twelve to go. If anyone needs me, I’ll be in the west wing, hiding behind a trunk.

David and Amy are worried that they may have to wait in the storage room all night, although we saw at the end of yesterday’s episode that it was 4am, so it’s not like it’s going to be a particularly long wait.

Amy chews up a line: “If they come in, they’ll leave the door unlocked. Then we can get out, and they’ll never know we — they were in here.”

They have trouble with the end credits today. The theme music plays for about twelve seconds before the credits show up. When they switch to the production credits, they shake a little bit, and then the rest of the credit roll is crooked.

This episode is the first time we hear “Quentin’s Theme”, a mournful but catchy waltz played on violin and piano. We’ll be hearing it a lot in the coming months. The tune was written by Dark Shadows composer Bob Cobert, and it was originally used for a 1968 TV-movie adaptation of The Strange Case of Dr. Jekyll and Mr. Hyde that Dan Curtis made for the Canadian Broadcasting Company.