“You want to keep track of me? The amazing new phenomenon? The ghost who breathes?”

As the black-robed executioner opened the door to Vicki’s cell, her lover looked into her eyes, and promised her every last thing he could think of.

I love you, Vicki, he said. That’s all that matters.

The hangman grabbed her shoulder, and pushed.

Somehow you managed to travel through time, and find me. Somehow, I’ll find you. No matter what happens, I will find you.

She was led from her cell, down a dark corridor, to the gallows.

The hood was placed over her head.

It was a promise, and a prayer.

I will find you!

It was the only thing she could hear, as the rope tightened around her throat.

I will find you, through the centuries, and we will be together again! Our love will never die!

And as it turns out, that is exactly what happened, so I don’t know what the hell he’s complaining about now. That’s a three-pointer if I ever saw one. That was nothing but net. 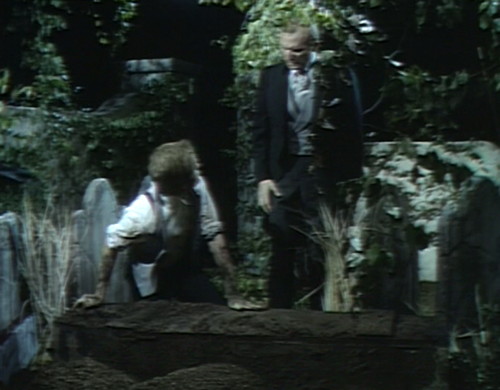 But Dark Shadows has committed to what is apparently a long-term postmodern deconstruction of the melodrama, where the star-crossed lovers are thrown a big fancy wedding in a huge mansion, with an extensive guest list of well-wishers and family friends, and instead of saying, awesome, thanks very much, the bride and groom dash off in opposite directions, and make what appears to be a completely cold-blooded and logical decision to entirely lose their shit.

So here comes the groom, or what’s left of him, single-handedly tearing up the Eastern seaboard, armed only with a small shovel, a crowbar, and the tattered remnants of a rented tuxedo.

But Jeff has found himself a mystery box, and you know how much fun those can be. He’s decided that he used to be Peter Bradford, the 18th-century lawyer and post-mortem Houdini, who apparently got hanged and buried, with a gravestone and everything, and then kind of slipped out the back patio and hitched a ride to the late 1960s.

Now, as I said, digging up Peter’s coffin and finding that it’s empty should basically be the confirmation that Jeff has won the tragic romance sweepstakes. He beat the odds, and made it back alive.

Remember me! he shouted, and she did. I will find you! he said, and that’s crossed off the list too. We will be together! he promised, and what do you know? Three out of three! I don’t know if that’s an all-time high score, but it’s certainly a personal best, and more than enough reason to get his ass back up to sea level. What is the matter with people?

Roger is also having a hard time understanding the finer points of the scenario.

“You’re being completely irrational,” Roger declares. “Why should anyone have to be in that coffin? Haven’t you ever heard of grave robbers? The body could have been stolen!”

And that’s a good point. Jeff is actually a grave robber himself — he spent a couple months scavenging body parts for Dr. Lang’s mad science experiments.

In fact, Adam, the creature that Dr. Lang brought to life, was built out of parts that Jeff…

Hang on. I just thought of something. What if Adam is Peter Bradford too?

Damn it, you guys, you can’t all be Peter Bradford! This is going to get confusing. Some of you are going to have to agree to be somebody else.

Anyway, Jeff eventually heads home and starts to pack, because that’s what you do after you dig up your own grave and find out that you’re somebody. You take inventory.

And here’s where we get a glimpse of the home life that Vicki will be missing out on. Jeff currently has three ties deposited on the bedframe, and a further two ties hanging off the lampshade. There are five different ties in this shot. Then he opens the drawer in his bedside table and starts pulling out brand new dress shirts, still in their packaging, with the pins and everything. This seems like a fairly haphazard way to organize your wardrobe, but maybe Jeff has his own routine.

Vicki comes over, and Jeff just keeps on packing, because apparently the our love will transcend time thing only applies to the immediate post-execution period. She tries to express interest.

Vicki:  What are you going to do?

Jeff:  Does it matter?

Jeff:  Why? You want to keep track of me? The amazing new phenomenon? The ghost who breathes?

Vicki:  I don’t want to hear any more of that!

Jeff says, “Yeah, I guess you don’t,” and then he just keeps on folding ties, because there’s probably another sixty or seventy strewn about other parts of the room, and we’re burning daylight.

Then there’s a whole drama around the books. He starts scooping up piles of worn, dusty hardcovers, which he’s accumulated along the way and seems determined to hold on to. 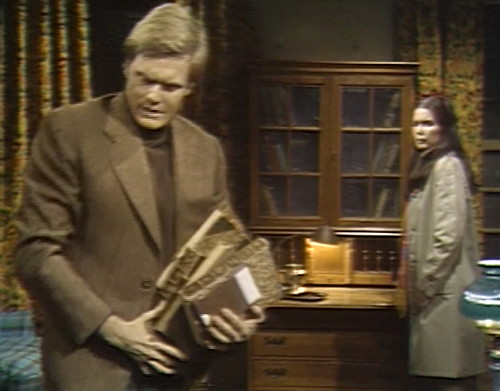 “Look… just don’t,” he sighs, struggling under the weight of the collected works.

“Don’t what?” Vicki asks, as he tries to cram the books into his traveling case. “Don’t tell the truth?”

“No!” he says, closing the lid of the suitcase and hoping for the best. “Don’t make what’s impossible seem possible.”

Man, he really wants those books. He must be halfway through a whole stack of Agatha Christies, and he can’t stand the thought of never knowing who all the murderers are.

Vicki’s still hollering at him about their future, and Jeff just keeps on hate-packing as hard as he can. As he crosses the room, we see that he’s got sport coats scattered everywhere, including one on the back of the rocking chair, and another one hanging from a light fixture.

Then Jeff opens the closet door, and you know what? The more that I see of Jeff’s lifestyle, I’m starting to understand Vicki’s point of view. Some guys just aren’t cut out for bachelor life.

When Roger is talking to Jeff at the graveside, he gets stuck behind a branch for a couple of lines. He delivers the line about grave robbers through a face full of leaves.

As Jeff runs from the cemetery, he puts a hand on a plywood gravestone, which wobbles.

Liz asks Vicki, “Would you like me to make sure that Rog — that Jeff — that Roger hasn’t come back?”

Jeff pauses as he’s taking books down from the shelf, and one of the books slips out of his hand, and crashes to the desk, and then to the floor.

Jeff’s apartment is laid out differently than the last time we saw it a few weeks ago. For one thing, the door to the apartment is on the left side of the set, instead of the right.

That’s probably James Shannon playing the executioner in the flashback sequence today. He was on the show last week, and he usually plays these law enforcement roles. But he’s got a hood on today, so it’s hard to be sure.