“Go get me the stake and the mallet. I still have blood plasma downstairs from the experiment.”

Okay, if everyone can take your seats, we’ll begin. Today’s lesson: How to kill a television character. 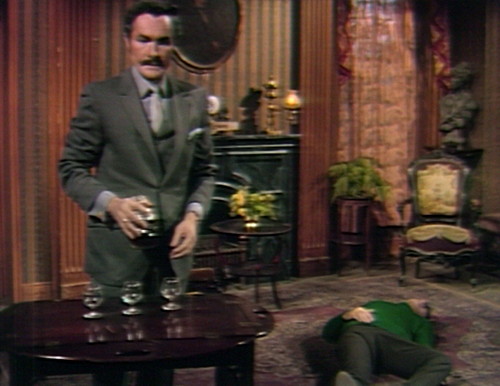 Now, I assume you’ve all done the reading. Last week, we saw Nicholas Blair, the satanic snake oil salesman, hit a teensy snagette in his intricate plan to breed two Frankenstein monsters, and create a new race of people dedicated to serving the Devil.

He’s been using blood-sucking seductress Angelique to keep Barnabas Collins out of his hair, but Angelique’s gone rogue, and now she’s planning to kill Barnabas so that they can be happy newlywed vampires together. Barnabas shares a life force with Adam the enormous Frankenstein man, so now Adam is lying on the carpet, and causing delays for the morning commute.

Last Thursday, Dr. Julia Hoffman — the most interesting and therefore the most important character on the show — came over and asked Nicholas for help in tracking down Angelique and Barnabas.

Nicholas tried to hand her his usual line of jive talk, on the general theme of “I haven’t the slightest idea what you’re talking about, I’m just a regular joe with a magic mirror and several members of the living dead littering the premises.”

Julia treated this transparent mendacity with the icy contempt that it deserved.

Now, she’s come back, because the already fairly dire situation has become even more dire. Barnabas is dying, and Adam is dying, and the only way to fix the situation is to locate Angelique and hammer something sharp into her, pronto.

Moaning, Adam begs Julia for help, and she opens her doctor’s bag.

Nicholas:  I have no healing powers, Dr. Hoffman.

Julia:  You won’t need them. You have knowledge.

Nicholas:  And is knowledge better than medicine?

Julia:  In this particular case, yes. 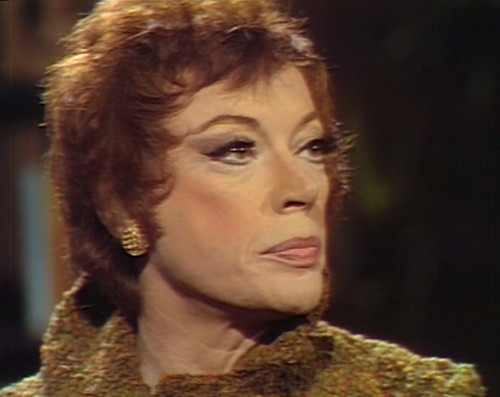 Then she looks him in the eye, and says, “Where is the coffin?” because Julia is a rock star.

And then the bad thing happens.

Julia:  Where is Angelique’s coffin?

Nicholas:  You’ll have to forgive me for being bewildered, but I don’t know what you’re talking about, Doctor. Am I supposed to have a coffin, and know a woman named, uh — Angelique?

Nicholas has been on thin ice with the audience for the last month or so, because he’s been grasping at a very slender collection of story threads and pretending that it’s a brilliant master plan, but this is the point that he completely breaks trust with the audience.

Nicholas is dead. He’ll be off the show in a couple of weeks, and we’ll be glad to see him go, and this moment is exactly why.

Look at what Julia’s doing here. She says, “We must go to that coffin. I have the instrument that will make them both healthy again,” and then she reaches into her medical bag, pulls out a wooden stake, and sets it on the table.

This is the most badass thing a human being has ever done in the entire history of anything. It’s better than a mic drop — it’s a stake drop. You cannot get cooler than that.

The whole purpose of a television character is to make their show more interesting, and Julia Hoffman shows up every day and she does her goddamn job.

And she’s furious here, because the most direct way to improve this floundering storyline is for the badass doctor to actually team up with the Devil, and go vampire slaying together. I cannot overstate how much better the story would be, if he could just drop the nonsense for ten seconds, and report to work. 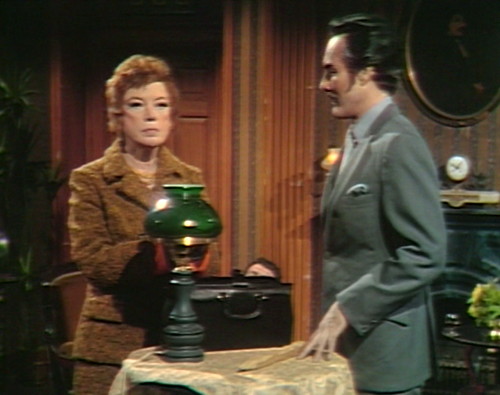 But he insists on just standing there, and acting like a dick. Julia says that she can give Adam some injections which will help him stay alive until the vampire’s defeated, and Nicholas concocts the most irritating possible response.

“You are psychic, Doctor,” he says. “You are prescribing without an examination.”

And Julia just can’t even with this. She rolls her eyes, and does a Jim Halpert-style take to the camera.

She is explicitly inviting Nicholas to stop being a tool for five seconds, and he’s deliberately sabotaging the show. He is actually trying to make the scene go slower.

So if you ever want to kill a character on a television show, then that’s how you do it: you have him declare war on story progression. I’m not sure why you’d want to make the audience hate a character and look forward to getting him off the show, but then I’m not actively working for Satan, so what the hell do I know.

The first tree that Willie passes in the woods is already unstable; he actually puts out a hand to steady it as he goes by.

Julia has a little trouble getting her medical bag open while she’s confronting Nicholas. She manages it in time to hit Nicholas with the line “Where is the coffin?”, but it’s a close race.

There’s an extraordinary shot near the end of act 2 that begins with Barnabas moaning and writhing on the ground, and then it pulls back to reveal that he is in fact in a television studio, lying on a small patch of artificial turf. There’s also a studio light on a little stand. This lasts for five seconds, which doesn’t sound like a long time but it’s long enough.

19 thoughts on “Episode 621: Better Than Medicine”