“I don’t know what to believe. Everyone tells me the sensible thing to do is the crazy thing to do.”

So we’ve reached the point where they’re averaging one major felony an episode. Dark Shadows might have more murder per hour than How to Get Away with Murder.

And this, as we know, is a network daytime television show that’s actively being marketed to children. The headlines say “Vampire Excites Wives, Young Set,” and the corner drug store is stocked with board games, bubble gum cards and Halloween costumes.

In fact, today’s episode aired on October 31st. Ben Cooper has done brisk business with Barnabas Collins masks during the 1968 Halloween season, and the kids are running home from school to throw their costumes on, get out on the street and start collecting candy by the sackful.

I mean, not right away, of course. First, they have to find out if the guy they’re dressing up as will be strangled to death on television at 4:02 in the afternoon. 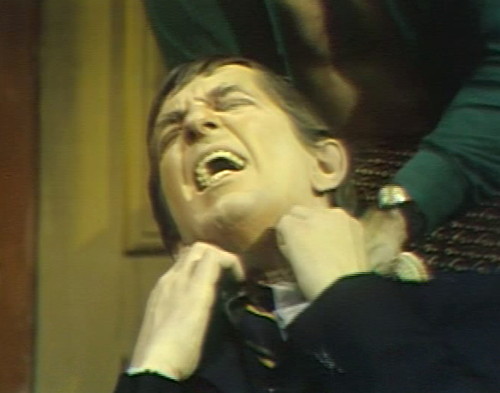 So, you know that popular catchphrase, “Kids, don’t try this at home”?

Well, this scene is being broadcast to an audience of children, many of whom have easy access to a curtain tie or other throttling-appropriate implements, plus their brother is literally wearing a Barnabas Collins costume right now.

Honestly, in 1968, people just did not give a shit. It’s amazing that anyone survived past Christmas.

And it’s not like the Wives are unaware of what the Young Set are looking at. People only had one TV back then, and it was smack in the middle of the den. Mom would have to be engaged in some seriously compelling laundry to miss this happening in the other room.

Mrs. Johnson:  LET GO OF HIM! LET GO, YOU MUST BE OUT OF YOUR MIND!

Mrs. Johnson:  NO! WHATEVER HAPPENED —

And then he yells, “YOU CAN’T STOP ME!” and pushes the housekeeper across the room. I mean, I know people were pretty heavily involved in anxiolytics, but how much Valium could you possibly take, to make this okay for your kids to watch after school? 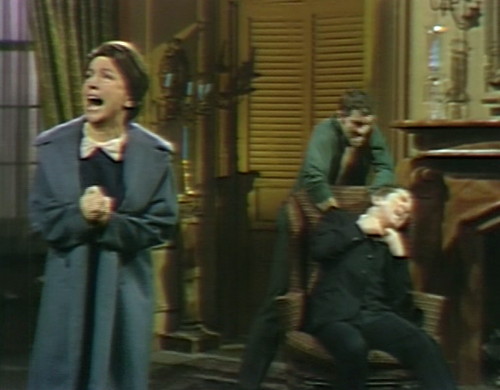 And then Mrs. Johnson stands in the middle of the room and shrieks, “HELP! HELP! SOMEONE HELP!”, just to make sure that all of your neighbors are aware of the five-alarm emergency that is apparently taking place in your living room. 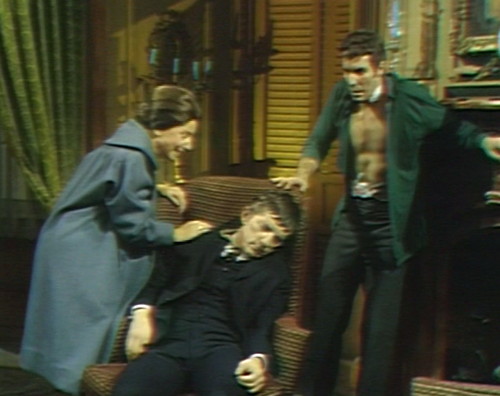 Once Barnabas is good and dead, the man in the cut-open shirt with grievous wounds on his neck and stomach runs out of the house, escaping more or less scot-free.

I’m trying to imagine what a children’s television show could possibly do that would be more irresponsible than what happens in this episode. The only thing I can think of is if Joe finishes throttling the guy in the Barnabas Collins costume, and then runs outside and asks the neighbors for candy.

And the great thing is that once this blows over, it turns out that the theme of today’s episode is Don’t Tell Dad.

Barnabas:  I’ll be all right. You must go back to Collinwood… and forget.

Mrs. Johnson:  Well, how can I forget that madman — that maniac — I won’t feel safe until the police have locked him up!

Barnabas:  Mrs. Johnson — as a favor to me — don’t call the police!

And she doesn’t! Barnabas just stares at her with those puppy dog eyes, and she agrees to not report the crime. I don’t even know how many offenses we’re looking at here. Felonies are just piling up all over the place.

When Mrs. Johnson gets back to Collinwood, Liz and Roger are dragging in a half-conscious Joe, who they found hiding in the cemetery.

A horrified Mrs. Johnson screams, “He was trying to murder Mr. Barnabas!”

Mrs Johnson insists, “I saw it! I saw it with my own eyes! He had a rope around Mr. Barnabas’ neck!”

Everybody’s stunned; they don’t know what to say.

So what we’re seeing here is the next logical step in Dan Curtis’ policy of Infinitely Escalating Thrills. It’s hard to imagine the show getting even more shouty and murdery and irresponsible, but that’s exactly what’s going to happen.

In fact, we’re not that far away from an episode where two young children lure their teacher into a deserted room so they can psychologically torture her. The Wives and Young Set won’t know what hit ’em.

Tomorrow: The Truth About Cats and Dogs.

Mrs. Johnson tells Harry, “You keep out of this! Mr. Roger and Mrs. Stoddard are here, and they’ll do what’s right!”

As the credits begin, someone starts to walk onscreen at the right, but quickly realizes his mistake, and steps back out of the shot.

In the graveyard, Liz and Roger look at a tombstone, which says, “In memory of Jonah Collins who died June 15th 1863, Aged 23”. That means the baby was born sometime between June 16, 1839 and June 15, 1840. We’ll be visiting 1840 a couple years from now, and we’ll see the events of September 1840 through January 1841. It’s possible that Gabriel and Edith had a baby named Jonah that we don’t hear about; they hardly speak about their children at all. Maybe he was always taking a nap while his parents ran around and acted like lunatics.

Tomorrow: The Truth About Cats and Dogs.