“And in another house, nearer the sea, the emotion is rage.”

I don’t usually take the time to appreciate the voice-overs that open each Dark Shadows episode, but every once in a while, they simply demand attention.

On this cold, clear night, one can hear the sound of the ocean at the great house of Collinwood — a sound which means peace to some, but rage and fury to others.

And in another house, nearer the sea, the emotion is rage — rage because one of the many plans conceived there is in danger of being stopped by a violent death.

I mean. You have to give it up for that. And today, I am filled with love for everything, even the weird voice-over. I’ve been pretty hard on our little cow-town spook show for the last few weeks, but today’s episode is super enjoyable.

In fact, I would say that this is pretty much a perfect episode of Dark Shadows, if by “perfect” I mean that it’s fundamentally flawed in several amusing ways. And I’m a Dark Shadows fan, so obviously that’s what I mean.

The first thing that happens today — literally, the very first shot — is that silver-tongued mastermind Nicholas Blair stabs an end table with a letter opener.

Nicholas is usually a cool customer, but he’s just found out that Barnabas wants to kill Eve, the new Bride of Frankenstein lady who’s central to his demonic domination plans, and he simply won’t have it. He stalks around the parlor in a full-on grouch, with angry thinks monologues sizzling out of his eyebrows.

You know, Eve stabbed that same table with a letter opener on Friday. That must be their stabbing table.

Then Adam comes in, and starts waving fingers around. He’s heard about Barnabas planning to kill Eve, and he wants to do something about it. The voice-over was right; the emotion is rage. That’ll teach you to dismiss voice-overs.

Nicholas says he’ll take care of it, which frustrates Adam so much that he picks up the letter opener, and he stabs the same table. Honestly, I’ve never seen a household so furious with its own furniture. 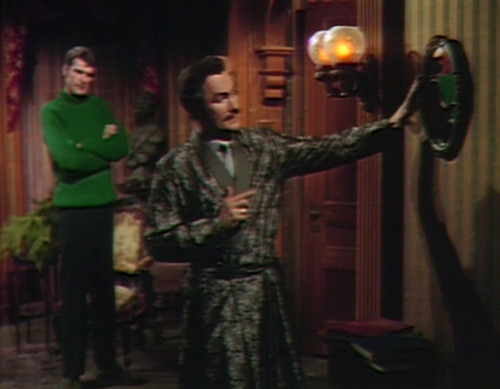 Adam the un-bionic man is engaging his sarcasm subroutines, so Nicholas calms him down by showing off some of his tech. He indicates the decor.

Nicholas:  What is that?

Nicholas:  Is that all?

Nicholas:  How do you know?

That sounds like a weird question, but it’s all leading up to his presentation on Apple’s new smartmirror, with telepathic touchscreen.

The magic mirror is possibly the most successful special effect that they’ve done so far. I can’t say enough good things about it.

They’ve been playing with Chromakey for more than a year now, for all kinds of things — vanishing ghosts, floating body parts, pretending that they’re outside — but this is their best work so far. It’s simple, totally effective, and a perfect fantasy metaphor, which turns the mirror into a TV screen, and vice versa. 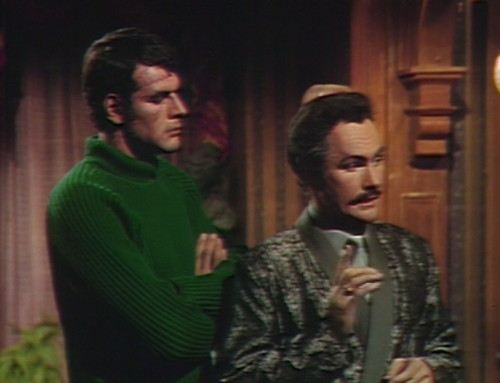 The lead-up to the effect is like a little magic trick. Nicholas draws our attention to the mirror, and we see Nicholas and Adam’s reflection. Then the camera cuts to them talking about the mirror — and while we’re not looking, the stagehands wheel in a portable bluescreen behind them, so it can be reflected in the mirror.

Cut back to the mirror, which is now set up for Chromakey broadcast.

Nicholas says avada kedavra, fiddles with the antenna for a minute, and then they tune in Angelique, who’s crept into Jeff’s room for a midnight snack.

While Nicholas and Adam observe the scene, the camera pulls in tighter on the mirror, until the image fills the screen, and they just seamlessly transition into the new scene.

This is a really good effect, is what I’m saying. I don’t have a joke or an insight about it; I just really like this effect.

Anyway, what we learn is that sexy vampire Angelique is visiting Vicki’s ex-boyfriend Jeff, who apparently fell asleep fully dressed and with all the lights on. He’s got a jacket and tie on, and he’s even wearing shoes. Jeff wears more clothes to bed than I do when I go to work.

Now that I think of it, Jeff doesn’t even have a job right now, so I don’t know why he’s wearing a tie in the first place. Maybe he uses some kind of Transcendental Meditation version of LinkedIn. Angelique might be interrupting him in the middle of his networking trance. 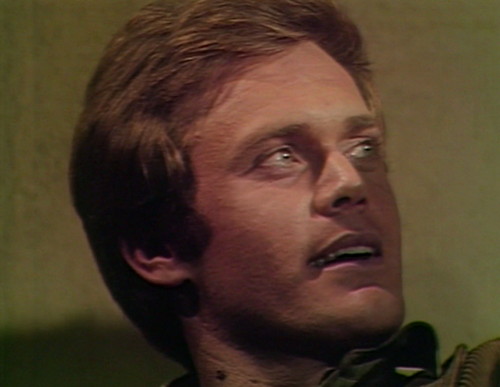 He tells her to go away — he’s in love with Vicki, and he doesn’t want to hang out with soap-vixen succubi anymore. But she does her Jedi-vampire mind trick on him, and he stops resisting.

He smiles, and says, “What is this power you have over me?” like it’s the greatest thing he’s ever seen. And I know that I don’t actually like Jeff much, but — this? I don’t mind watching this. 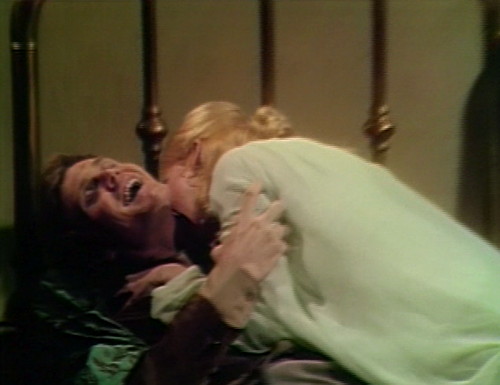 I don’t want to get weird about it or anything, but there’s a pretty specific fantasy that they’re tapping into with these vampire seduction scenes, and I would personally be fine if they did this kind of thing, like, way more often.

At this point, Nicholas suddenly butts in, because if the scene got any better then you’d never be able to pry people away from the television set, and it would destroy the United States economy. You have to be very careful about things like that. 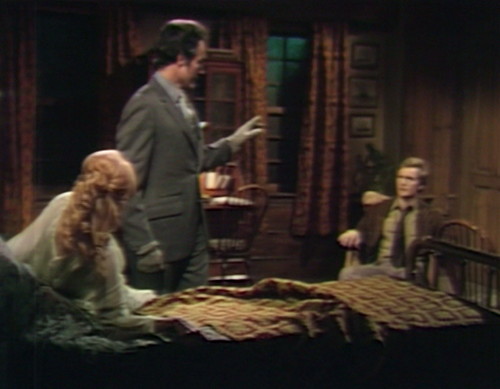 Anyway, it’s not like Jeff’s off the hook or anything. Nicholas snaps him into another trance, and just sits him down in a chair using the power of midichlorians or whatever. It’s shaping up to be a trying evening for Jeff — and he’s had people try to cut off his head before, so he knows from rough evenings.

Nicholas sends Angelique home without supper, and takes the opportunity to gather some intel on her extra-curricular activities. Jeff tells him all about Angelique’s interference with the Bride of Frankenstein experiment, and then Nicholas thanks Jeff for being a good boy, wipes his memory clean with a damp towel, and sends him back to bed.

So once again, Nicholas Blair uses his magic powers to shake a character like an Etch A Sketch, and undo any inconvenient story progression.

Now, I’m not opposed to breaking out the Men in Black neuralyzer every once in a while, but this is actually the fourth time we’ve seen this trick in the last five episodes. Carolyn and Maggie were mind-wiped last week, Harry got hypnotized yesterday, and now this.

I mean, it’s theoretically exciting to have a villain who’s so powerful that he can stop time and snap chunks off someone’s brainstem whenever he feels like it, but you can’t go to that well every single day. At a certain point, you need your villain to let go, and stop micromanaging everybody’s storage capacity.

But the one thing that makes this scene work is that after Nicholas puts Jeff to bed, he comes back and knocks on the door, pretending that he just came over to see if Jeff wants to go out for a drink. For a moment, Jeff is haunted by the echo of the extraordinary “dream” he just had, but then he rubs his head and decides that everything’s fine.

So Nicholas is basically punking Jeff, which is kind of funny. The neuralyzer is a fun device in the Men in Black movies, because it makes the Agents look extra cool and powerful, and it invites the audience to see the world through their eyes. Our minds aren’t wiped by the memory flash, so we get to be one of the special people who know the real truth.

Also, Nicholas is apparently using his otherworldly demon powers to get Jeff to go out to a bar with him, because Nicholas is a baller. If he could just get the guy to stop rubbing his head all the time, then we could get somewhere.

And that’s not all the good stuff in this episode. I’m not even going to get into the scenes where Adam locks Eve in the basement for basically no reason, while she screams that she’s going to kill him, but it’s fun and shouty and you’re just going to have to take my word on that.

The thing that really needs to be addressed is the cliffhanger, when Nicholas gets home from his date with Jeff and tells Angelique his new story idea.

“There is a man,” he says. “He must become your slave. Nothing must prevent that from happening.” 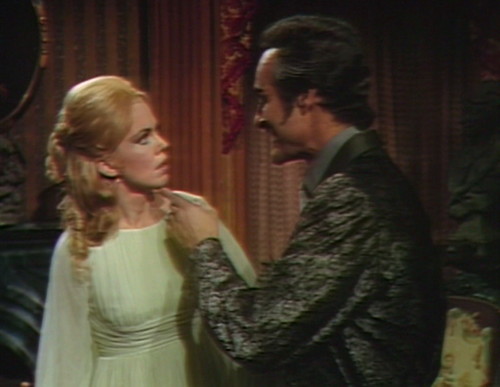 She doesn’t know who he’s talking about, and he playfully chucks her under the chin.

“You know,” he smiles. “You tell me. Don’t be afraid! I promise you that you will have him.”

The penny drops, and Angelique is stunned.

And there you have it, the best possible plot point. They’ve been keeping Angelique out of sight since she became a vampire in August, and now they’re finally ready to unleash her on the main character again, bringing the Barnabas/Angelique supercouple back to the front burner.

So every single person in the audience is guaranteed to be riveted by that ending. You couldn’t keep people away from tomorrow’s episode with a court order and riot gear. And it’s only Tuesday! There may be hope for this show after all.

There’s a camera glitch as the magic mirror pulls back to show Angelique approaching Jeff, making it look as if the mirror occasionally gets bad reception.

In the middle of Nicholas’ argument with Adam in act 3, the boom mic moves, and Nicholas’ volume drops for a few seconds.

“Jeff’s room was mostly recently Stokes’ apartment, which makes for at least the sixth incarnation of this set since it was first introduced as Roger’s office at the cannery in episode 45 back in August 1966, and it won’t be the last time we see this set redressed either. We first saw Peter Bradford when this set was dressed as the interview room of the Collinsport Gaol. Sometimes there was a fireplace in the right-side wall, and sometimes that part of the wall was just bricked over. In Jeff’s room, we’ll actually see the fireplace change from the right wall to the left at some point.

“The desk is from Jeremiah’s room at the Old House, where in episode 377 he’s seen sitting at a desk that is identical to the one in Jeff’s room — same color, height and width, with the shelving cabinet showing the same triple-pane window design, and the writing table itself fronted with the same design of letter slots.”