“Yes, Mr. Clark. We’re going to create another one.”

It’s currently 5:00am on Thursday as I’m writing these words. I woke up early, because I still have to write Wednesday’s entry. Last night, I was just sitting here looking at this episode, and I couldn’t think of a damn thing to say about it. But that’s the challenge that I created for myself on this blog — a four-year-long series of daily deadlines, mostly just to see if I could manage it. Apparently I could, until today.

The real problem with writing to a deadline is that as the time approaches, it’s hard to think about anything except that ticking clock. I think this is why there are so many movies and television show episodes where the climax is defusing a time bomb — the countdown to a deadline is the scariest thing that a writer can think of.

That’s a shame, because a countdown is basically just a cheap stunt that can stretch out to any length that the writer needs in order to fill up time. “Should I cut the red wire, or the green wire?” is not a dramatically interesting question. So you create an arbitrary amount of time, and the character cuts a wire, and then either it works or it doesn’t, and the scene is over. Phew!

We’re currently in the middle of this “create a bride of Frankenstein” story, which has a deadline that’s even more arbitrary than usual, because there isn’t a ticking clock to put a limit on how long we’re all going to stand around and talk about it.

Adam wants Barnabas and Julia to create a mate for him, and he’s threatened to kill Vicki and everyone else at Collinwood if they don’t go through with it. We don’t have any way to judge how close they are to completing this imaginary make-believe task, which could happen at any time between right now and never, so every step in this story is just another plot token to collect until the writers finally get sick of it and think of something else to do.

Today’s example involves Jeff Clark, former 18th century lawyer of no fixed abode, discovering the laboratory that Barnabas and Julia have set up in the Old House basement. Jeff spent a while working for mad Dr. Lang as they stitched Adam together, so he recognizes what’s going on, and he’s going to call the police and put a stop to it. 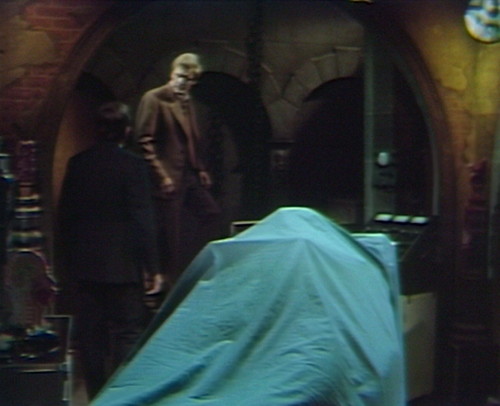 Furious, Barnabas shouts, “Do you want Vicki to die?” which is a dangerous thing to say while the audience is listening. There is a non-zero chance that the answer to that question is yes.

Barnabas and Jeff proceed to have one of those Dark Shadows backacting arguments, where one of the participants yells his lines at the back of the other person’s head, so that the audience doesn’t miss out on anybody’s facial expressions. This is a conversation style that does not occur in nature.

Barnabas explains that Adam is threatening to murder Vicki — and if Jeff loves her, as we’re supposed to believe that he does, then he’ll assist them with the experiment, as he did for Dr. Lang. Only someone as bossy and self-centered as Barnabas Collins could take a moment like this and turn it into a job interview. 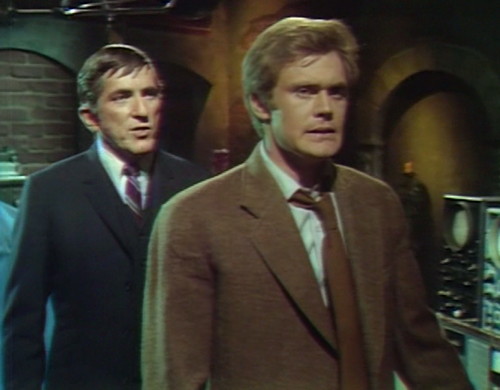 Jeff announces that he’s going to do the sensible thing — go to Collinwood immediately, tell Vicki to pack her bags, and take her out of town so that Adam can’t find her.

Barnabas counters by announcing, “Vicki isn’t the only person whose life is in danger. If we don’t go ahead with this, Adam has threatened to kill every member of the Collins family. Now, do you want to see Carolyn die, or Elizabeth, or David?”

There are two problems with this plot point. First, Adam is in love with Carolyn, and there’s no way that he’s going to go through with killing her — or any of her family, really. That threat sounded hollow when Adam first said it, and it still does. You don’t even need a red wire and a green wire on that one; all it takes is one thirty-second conversation with Carolyn, and the bomb is defused.

The second problem is that running away from Collinwood is actually a pretty good way to handle this crisis. Jeff and Vicki could take the Collins family with them, and just keep everybody out of sight until somebody deals with Adam. The guy’s never been further than Maggie’s house in his entire life; he has no idea where anything is. Just go on vacation. 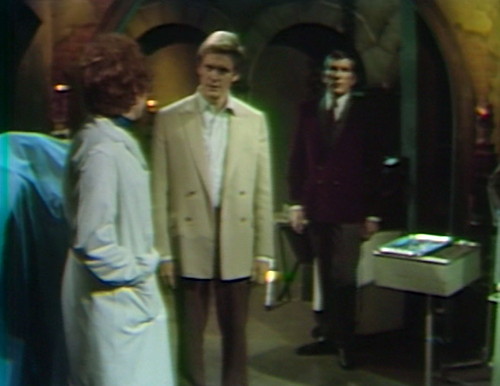 In fact, this is such a non-emergency that Jeff has time to go home, change his jacket, and then come back to the Old House to tell Barnabas and Julia that he’s decided to help them. Apparently, this is his deciding jacket. 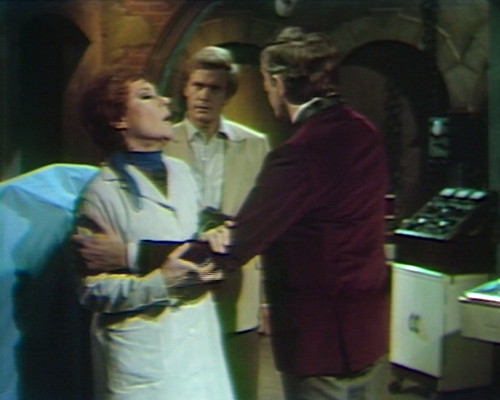 Julia isn’t feeling well, thanks to a plot point in a much more interesting storyline, so Jeff asks what he can do to help.

“That scope over there,” Julia says, “I was about to put it together. Can you do it?”

This is an entirely depressing thing to say. You haven’t started yet? Then what the hell is that thing lying under the blue sheet? For Pete’s sake, you’ve been at this for a week and a half already. This is going to take forever. 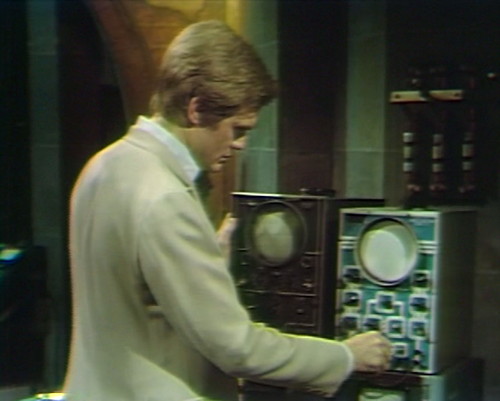 So Jeff walks over to a random piece of unplugged equipment, and fiddles with three knobs before stopping for an anguished thinks monologue. Apparently, that’s what it looks like when somebody puts a scope together. Now you know.

There’s a weird quality to Jeff’s thinks monologue in the teaser — it sounds like we’re hearing the pre-recorded lines as they’re played in the studio, rather than as part of the soundtrack. It’s back to normal for Jeff’s thinks in act 3.

During their argument, Barnabas steps on one of Jeff’s lines:

Barnabas:  Do you think —

Jeff:  — and I’m gonna tell her to pack her things, and we’re going to get out of here!

Barnabas:  You think that she will leave without an explanation?

Julia paces around in Josette’s room, distracted and nervous. She picks up one of Lang’s journals and leafs through it for a second, apparently unbothered by the fact that she has it upside down.

In Josette’s room, Barnabas tells Julia, “It’s all right, don’t lose your control. I think I have control of the situation.” 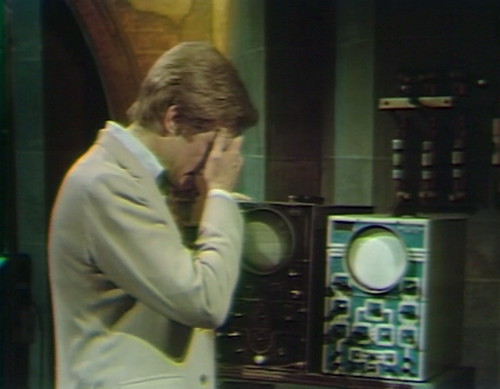