Oh, it’s the same old story. You invite a guy over, you spend the night together, there’s an exchange of body fluids, and the next day, he doesn’t even want to see you anymore.

Spoiler alert: He doesn’t resist her.

Joe is a sweet, charming, handsome and entirely innocent guy, the last surviving member of a vanishing species on Dark Shadows — the good guys.

Joe’s the ideal boyfriend, practically perfect in every way. He’s been dating Maggie for two years now, a pretty girl-next-door who he’s absolutely devoted to. He’s got a steady job at the Collins cannery, where he’s steadily working his way up the ladder by being a dependable, hard worker who earns everyone’s respect. He’s very handsome, but acts like he doesn’t realize it. He’s protective of Maggie, without being smothering or controlling. He is the world’s least-flawed citizen.

Naturally, that means he’s entirely superfluous on a soap opera, and especially on Dark Shadows, where they’ve spent the last year and a half investing entirely in monsters and eccentric occult experts.

But even on a normal soap, they wouldn’t be able to do a hell of a lot with Joe. There’s nothing to work with — no ambitions to thwart, or quirks they could hang a story on.

Lately, he’s become one of those empath chameleons that always occupy the outer fringes of a storyline, who exist in order to facilitate other characters’ emotional decision-making scenes. When Sam is worried about Maggie, Joe’s worried too; when Carolyn is puzzled about Jason, then Joe’s puzzled too. He picks up on the other person’s emotional state and reflects it back, so that the lead character in the scene can arrive at a decision in full view of the audience. I don’t think he’s had a story point of his own since before Barnabas came out of the mystery box, a year and a half ago.

But look at him now. Satanic confidence man Nicholas Blair has taken a shine to Maggie, and wants to get the perfect boyfriend out of the way. So he’s given the assignment to Angelique — former witch, eternal soap vixen, and currently Nicholas’ pet vampire. Angelique’s job is to feed on Joe, screw up his life, and get him out of the way.

So here we are, the evening after Joe’s first bite, and he’s rapidly deteriorating. Lately, the rule for vampire victims has been to get up the next morning, tie a scarf around your neck, and go on with your day, but Joe’s really feeling it. This boy is tore up from the floor up.

And worst of all, he’s losing track of where he put his self-control. He’s doing a lot of dramatic clarification lines, transitioning from “I’ve got to resist the call. I’ve got to!” all the way to “I can’t resist her any longer. I can’t!” within twenty-five seconds.

On his way to Angelique’s place, Joe gets a minor hero moment, discovering a crime against nature currently in progress.

Willie’s out tonight too, digging up a fresh grave so that he can bring the corpse back for Barnabas and Julia’s latest mad science experiment. Joe catches Willie in the act, and announces that he’s going to call the police.

This kind of thing happens all the time when you’re a good guy on a soap opera. Well, not the grave-robbing part, which is Dark Shadows-specific, but calling the authorities is standard operating procedure. 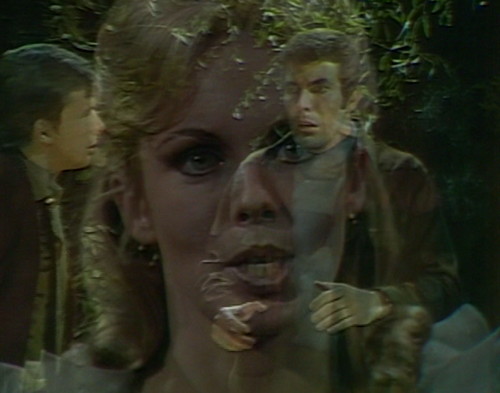 But Joe gets the hurry-up sign from the vampire, who expects her food delivered within thirty minutes or less. He abandons his hero moment, and takes off to Angelique’s place, leaving a baffled Willie behind. 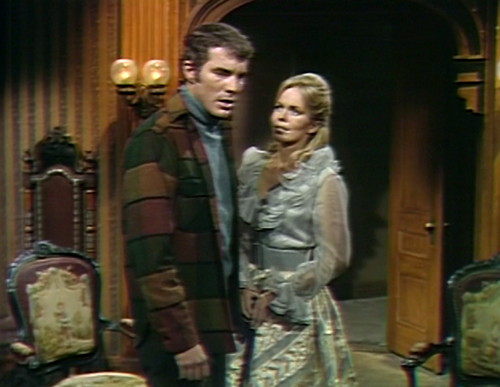 When he arrives at the house, Angelique gives Joe a moment to collect his scattered thoughts.

Joe:  I don’t understand why you have this power over me!

Angelique:  It’s only the power of love.

Joe:  I don’t love you. I love Maggie Evans. I don’t even know you.

Angelique:  My name is Angelique, and yours is Joe. That’s all we need to know about each other.

So that’s what our hero has been reduced to. He’s not the perfect boyfriend anymore; he’s just a name and a blood type.

She allows him to struggle for a second, and then holds out her hands. “You know it’s useless to resist,” she urges. “Come to me.”

And then we get a shot of Joe’s horrified, fascinated expression as he finds himself stumbling forward towards her embrace. They linger on this shot for a full twelve seconds, as he pants, and twitches, and then succumbs.

Now, on a practical level, they’re pausing so long on this shot to give Angelique the chance to put the vampire fangs in her mouth. They film Dark Shadows live-to-tape with no stopping, so they need moments like this, to fill up a little time.

But the impact on the audience here is that we’re looking into a man’s eyes as he suffers, and turns into meat.

The bite itself is over in two seconds — a flash of fangs, a dramatic music cue, and then cut to commercial.

It’s really just the punctuation to a sequence that’s actually focused on a good man — your dream boyfriend — as everything that he cares about crumbles to ash. 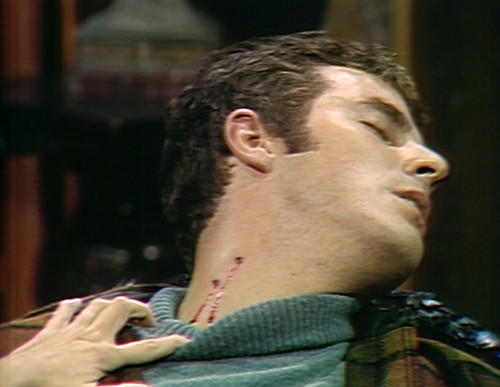 So here’s the question: Why is this so much fun to watch?

We like Joe. According to all of the time-tested rules of television, it is impossible to dislike Joe. There are characters on this show who have literally tried to create the perfect man in a laboratory, and Joe is better than that guy.

But the audience is being invited to enjoy the spectacle of a good man falling to ruin. The camera lingers on his drawn and haunted face, the show’s primary hottie pulled down from his pedestal.

As we return from commercial break, Angelique is pulling on Joe’s turtleneck, making sure the audience can see the blood dripping down his neck. It’s a sick detail that I don’t think we’ve seen on the show before, and it’s delivered to us on a platter. 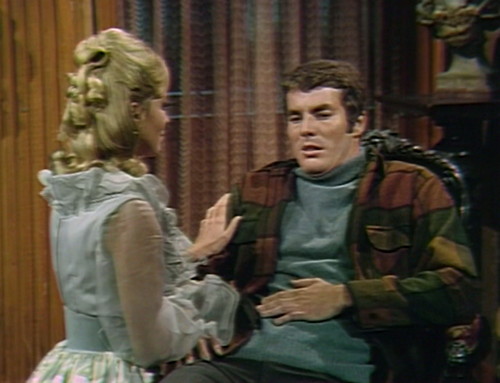 This is a technique that I’ve referred to before as “pretty girl in peril” — a sequence that lingers on a helpless woman who’s trapped and terrified. You’re expected to feel sorry for her, and to hope for the best in a general long-term way, but you specifically turned on this television show because, at some level, you enjoy watching her suffer.

We could be watching a game show right now — The Match Game is airing on NBC, if anybody wants to switch over — where the worst thing that happens to a person is that they don’t end up with more money than they walked in with. We could be watching a show where nobody gets physically assaulted. There are less-gruesome options on 1968 afternoon television.

But Dark Shadows is the breakout hit, and it gets more successful as it becomes progressively more sadistic.

And really, the physical assault isn’t even the problem that we linger on. Joe isn’t clutching at his neck and saying “ouch”; he doesn’t even ask for a Band-Aid. The real torture, which the audience will be enjoying all week, is what this is doing to his relationship.

Angelique:  What about her?

Joe:  I should be with Maggie.

Angelique:  Forget about her.

Angelique:  You will, in time.

Angelique:  But you need me. 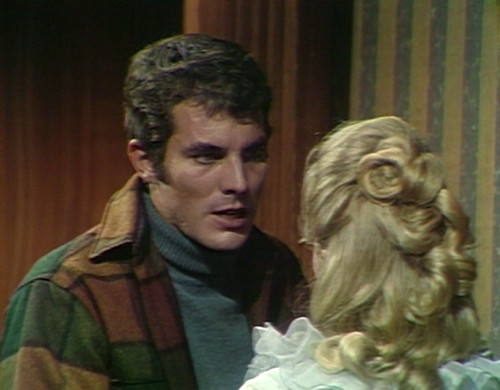 Angelique:  In time, your need for me will prove stronger than your love for Maggie.

Angelique:  Don’t try to think. It’s useless. Just as it’s useless to try to resist me.

Joe:  I’m beginning to believe that. 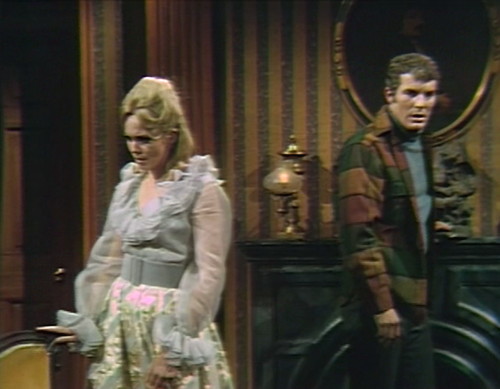 Dark Shadows has just discovered “pretty boy in peril”, a new taboo area to explore. Last week, we saw the new hottie, Tom Jennings, victimized on his first day on the show, then the vampire seduction of a handsome police officer, and now we’re going to spend a solid chunk of the next few weeks watching Joe’s will dissolve.

They’ve stumbled on to something important — that the audience likes watching the people we find attractive being degraded and punished. Angelique is treating Joe the way that we secretly want her to.

We don’t really want to hurt an actual guy — this is a mass-market network TV show, not a snuff film for clinical psychopaths. As messed up as this dynamic basically is, the pleasure of this spectacle is one hundred percent dependent on the fact that we all know this is make-believe, and at the end of the show, “Joe” wipes off the eye liner and fake blood, and the actor walks away unscathed.

That might be one of the reasons why Dark Shadows’ many on-screen bloopers don’t ruin the show. It’s actually the opposite — the mistakes enhance the show’s appeal. The “suspension of disbelief” is shattered on a minute-by-minute basis, every time a boom mic shadow appears, or an actor consults the teleprompter. We’re constantly reminded that it’s all pretend, which makes it a safe space to explore our deepest and darkest fantasies. 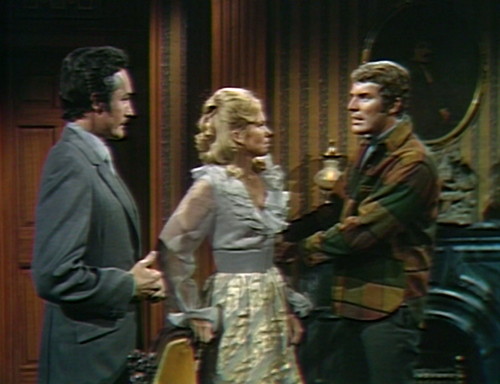 Oh, and by the way, it’s totally gay.

This isn’t actually the female empowerment moment that it could have been, if Angelique was in charge. She’s the one who’s technically sucking the blood out of Joe’s neck, but she’s being directed by Nicholas, who’s carefully stage-managing the entire experience. Every time Angelique spends some adult time with Joe, Nicholas is there — appearing silently in the room, having watched every moment.

Nicholas is supposedly motivated by his burning passion for Maggie, but honestly, they’ve only had a couple of tepid scenes together. If the purpose of this sequence was to show Nicholas seducing Maggie, then she would be the character on screen. This scene is about Nicholas seducing and destroying Joe.

That crazy, sadistic, dude-on-dude violation is what makes this the super-exciting taboo thrill ride that it is. That’s the thing that appalled and fascinated the audience of straight girls and gay boys, who watched this on daytime television in 1968 and collectively decided: Best. Show. Ever.

Tomorrow: A Sense of Themselves.

In act 2, when Willie says, “Wait a minute, Barnabas; that’s not fair!”, the camera pulls back too far, and you can see the top of the set, and one of the studio lights.

In act 3, just before Nicholas appears in the drawing room, the camera pulls back from Joe and Angelique to reveal a wire dangling on the left side. After a moment, the camera pans slightly to the right, to get the cable off the screen.

Tomorrow: A Sense of Themselves.

19 thoughts on “Episode 562: He’s Just Not That Into Being Supernaturally Controlled By You”